A lot of guessing going on right now – and who could blame you guys? Well, for starters – me of course! 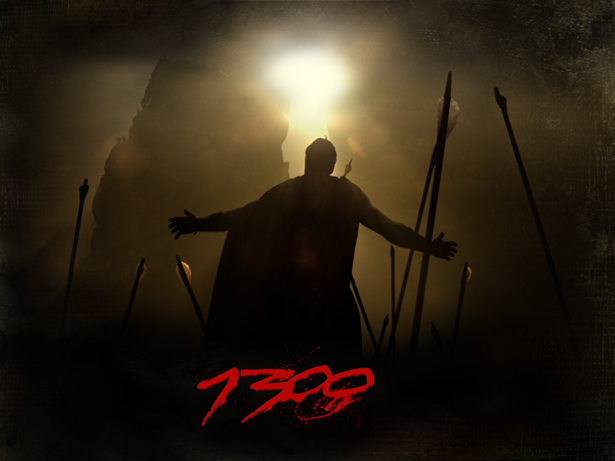 Look here my dear stainless rodent friends – we are in obvious limbo territory right now (the favorite of market makers in case you didn’t figure that one out yet) and IMNSHO the odds are rather iffy until we touch and breach the 1300 mark. 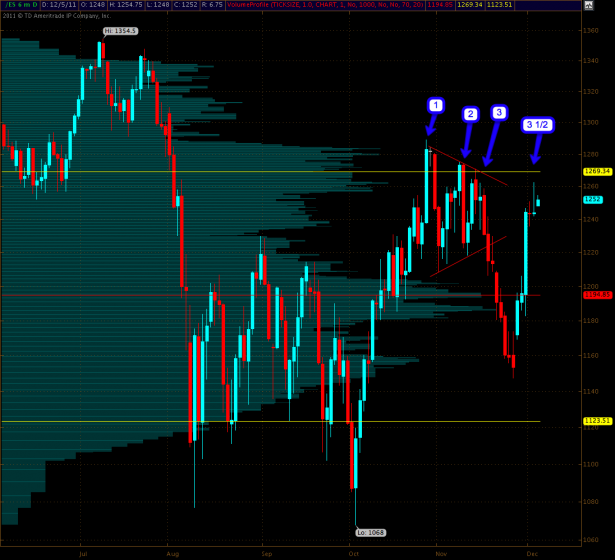 So, why 1300 Mr. Mole? Since late October we’ve had three attempts to reach and breach that coveted mark (bulls love round numbers) – but each one failed ignominiously and the third ended in an unmitigated disaster for the longs. The current push up is has been a Fed sponsored short squeeze deluxe and obviously weak handed late comers are now due to be taken to the cleaners.

There are many reasons why a final push up may not be imminent until mid December. First, as I already pointed out the weak hands usually get one in the groin before a big move higher. Second, we’ve come a long way and will require strong hands to push things through that 1300 mark. Third, there’s a volume abyss right at the magic mark and it will most likely take some kind of cloak and dagger operation to get us through that one – again, not something retail schmucks usually get to enjoy. So, I again expect some type of red herring and a bit of downside before the real players make their move. 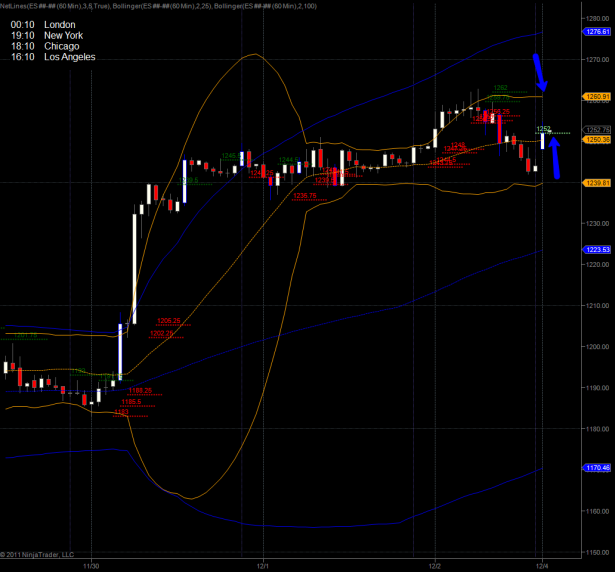 More perspectives below for the subs – please step into my musky lair:
[amprotect=nonmember] More charts and cynical commentary below for anyone donning a secret decoder ring. If you are interested in becoming a Gold member then don’t waste time and sign up here. And if you are a Zero or Geronimo subscriber it includes access to all Gold posts, so you actually get double the bang for your buck.
[/amprotect] [amprotect=1,13,9,12,5] 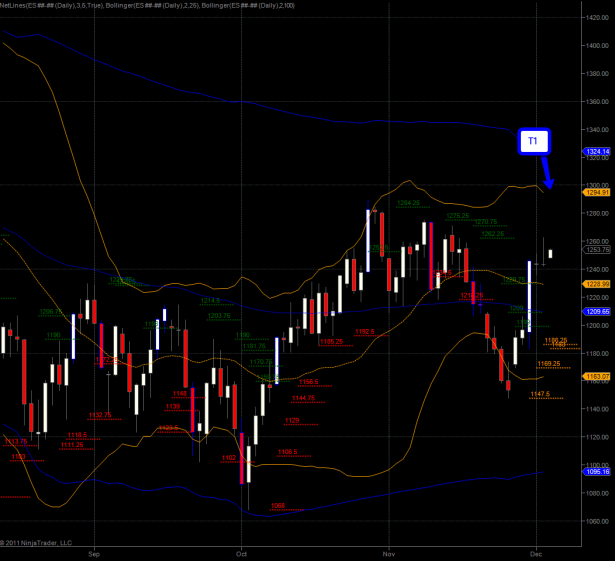 As I said on Friday, the only information we have on the daily panel right now is the target area of 1300 – ooops! Isn’t that the magic mark we are supposed to be breaching? Yet more fuel to the notion that it’ll take a quite a bit of doing to push above it. Until we do all kinds of bearishness could present itself at any time. Also, do not forget the time dimension – the longs have a few weeks of Santa Rally available to them and if they can’t breach this important milestone it would be a fourth failure and a catastrophic one. Not sure if you guys have heard of the expression – in the market four times usually is a charm. And given expected corrective action in early January an inability to push above may turn out to be extremely painful to the bulls. 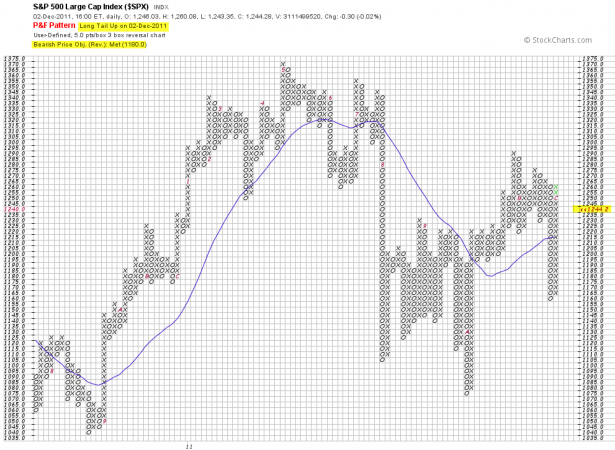 If you recall that 1260 target area on the hourly spoos – it also seems to be of prime importance on my daily SPX P&F chart. Once your remove all the noise we see a clear reflection of that diagonal resistance line that yet has to be breached. Good news for the bulls is that the bearish price objective has been met and that we have a ‘long tail up’ alert, which should take us higher on a close above 1260. 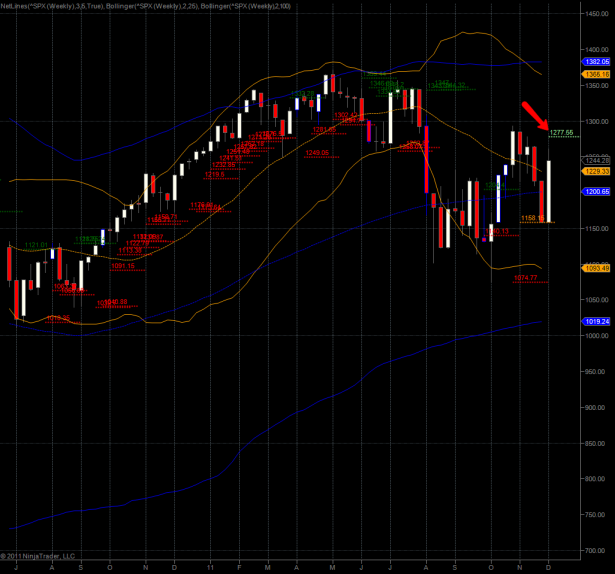 The weekly SPX chart may be of assistance in that we now have a brand spanking new NLBL at 1277 and change (assuming we make it across 1260 – right now I have my doubts). At least this gives us something to hold on to should we push higher after a little shake out. I know I keep pointing that out and perhaps I’m just being paranoid – if it happens then holding the 1220 mark will probably be of key importance, otherwise Santa may just show up with an empty sack. 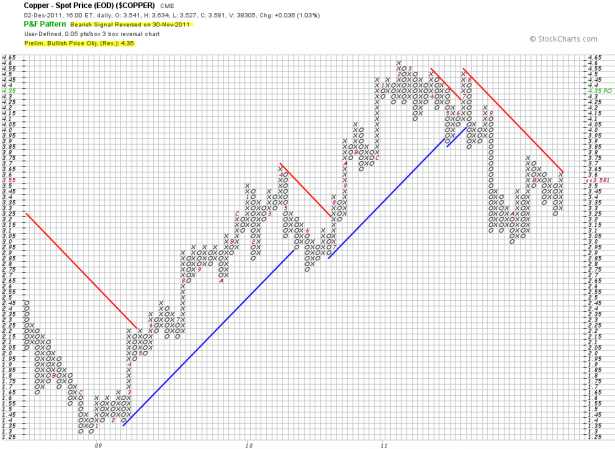 Copper is now looking more bullish – we have a new bullish price objective (BPO) at 4.35 and a bearish signal reversal. But what is also rather apparent is how copper has lagged behind equities as of late. Not sure how to interpret that at the current time but a push above 3.6 may give equities a much needed boost – look out for that as well as for a failure.

Otherwise I don’t have too much to report today – nothing really exciting on the currencies front right now. Commodities are bumbling around a bit and I’m not too excited about anything except cocoa, which is a setup I am patiently waiting for. No worries, when it’s ready for the plucking I will let you subs know first. If you are not a commodities trader then you can use either CHOC or NIB as rough replacements – I personally prefer the latter.