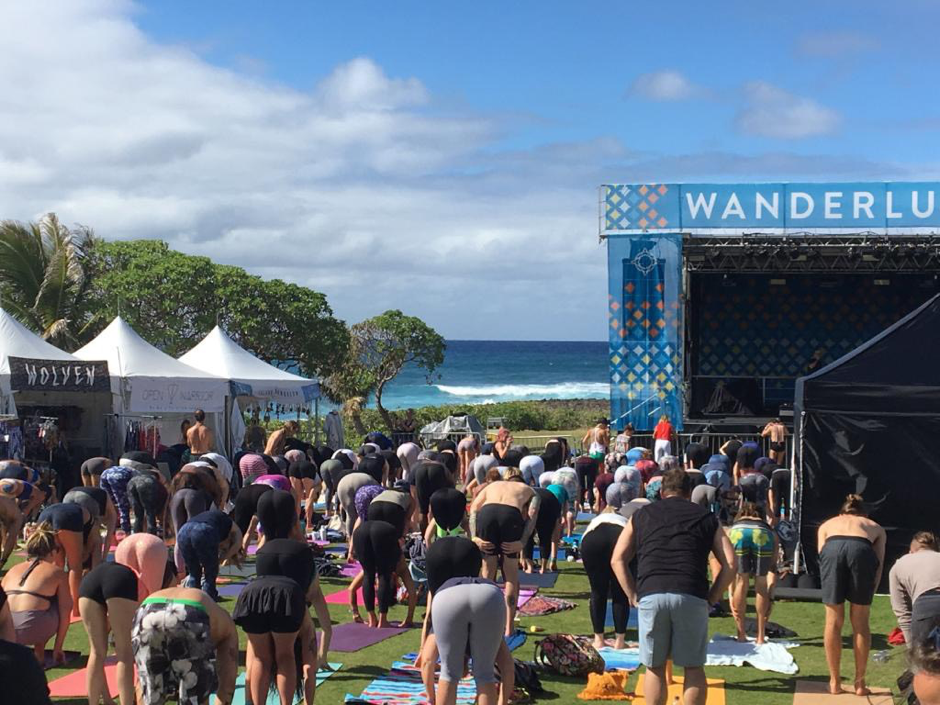 Mole has literally been working himself to the bone and in need of some serious R&R time. For real! During my trip to Europe a few weeks back, I was fortunate to stop in Spain to visit Mole and his lovely wife at the lair.

I’ve been zigzagging across the globe to the best summer festivals in Europe and the US, finally making my way back home for a few days of sleeping in my own bed. Not for long though, I was home for two days before heading to Tahoe for the Wanderlust festival, highlights including an epic set by Above and Beyond with Thievery Corporation. The above picture is from the Wanderlust festival in O’ahu back in March, it was also epic. My chakras are fully balanced and set on BLAST. I’m back at it and in-it to win-it.

While Mole is recovering, I’m here to entertain and dazzle you with professional trading babble.

If you’ve followed any of my posts in the past, you probably know my trading resolves around statistics. Although I prefer to keep all of my trading automated (unless you’re brain damaged, who wouldn’t?), I have to live in reality. And that reality is that in a firm of 150 professional traders, most are crushing it as discretionary system traders. That means they are sitting in front of the computer all day, taking entries and manually placing orders.

Now this isn’t my style, I prefer not to be looking at charts all day in front of the computer. Not my jam. But I had an idea… could I replace discretionary me with a discretionary AI bot version of me? Hmmmmmm. I’m game to find out.

After helping a few of them automate a substantial portion of their strategy, I became well schooled on VWAP for intraday trading, since so many of my peers live by it. After getting to know how it works at the institutional level, I understand why. Understanding how VWAP works at the professional level is key to ANY day trader, which I will cover in a future post. So much so, I would say understanding it is not optional for day traders.

Knowing the meat and potatoes of their VWAP systems, I automated every portion of it except the entries and made my own. And I do mean every part, position sizing, setting the stop, the profit taking exits that provide liquidity in the order book, trade logging and an algo to work the entries to ensure I’m also collecting rebates. Everything is automated, like working the entries and exits with limit orders. 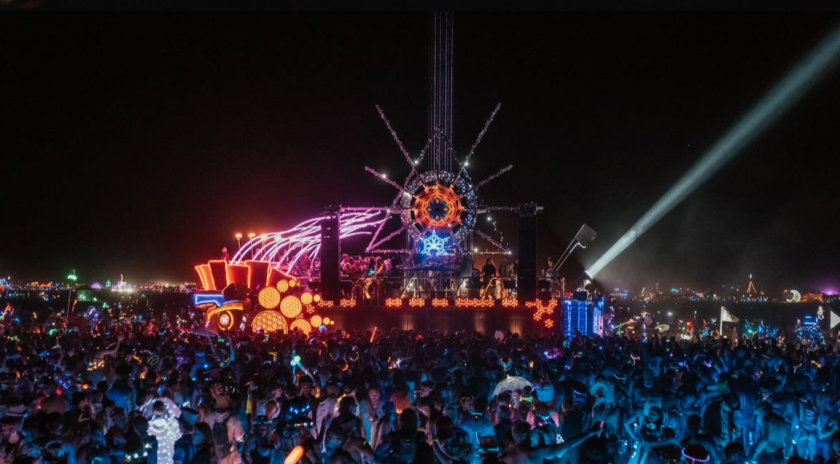 I’ve been manually trading the VWAP system, heretofore known as the VWAP Warrior, named after my favorite art car at Burning Man, The Mayan Warrior. I trade the system for 1-½  – 2 hours per session, typically the period post 9:45am EST and witching hour into the close. I’ve been averaging 15-20 trades per day on busy days, 5-10 on slow days and slowly getting better at it. I had an outlier day last week where I bagged a couple of 2R trades and closed the session out for 6R, that’s not typical though.

Most winners are 1R  and I’m averaging 1.5R per session, netting about .1R expectancy per trade plus rebates. I’m confident I can get to .2R in the next 6 weeks and then decide what’s next from that point. Not bad at all, but it’s a lot of work. I have to clear my schedule every day during those times, do prep work to make sure the python scripts are ready to rock and make sure I have zero distractions so I can be -> IN THE ZONE <-.

Is it worth it? YES.

Make no mistake: the only way I’m able to run this many trades is because everything is on autopilot once I place the entry order. If I had to manually manage each trade, set the stop loss, calculate position size, manage the trailing exit algo, check the hard to borrow list, message for a short locate, constantly update the target exit bar-by-bar, etc. I’d be lucky to get in 3-4 trades per session. I focus all of my attention on the setup, once it’s met the rest is set-it and forget-it. The minutia is automated.

So how do I improve? If you’re familiar with the Japanese principle of Kaizen, in practicality it is: what is measured is what is improved. The Japanese are legit, like my good friend Satish says, if the Japanese ever set their aims on making French food, the French are pretty much so fucked. We can take a page from the Japanese for our trading in the form of Alpha Factoring. 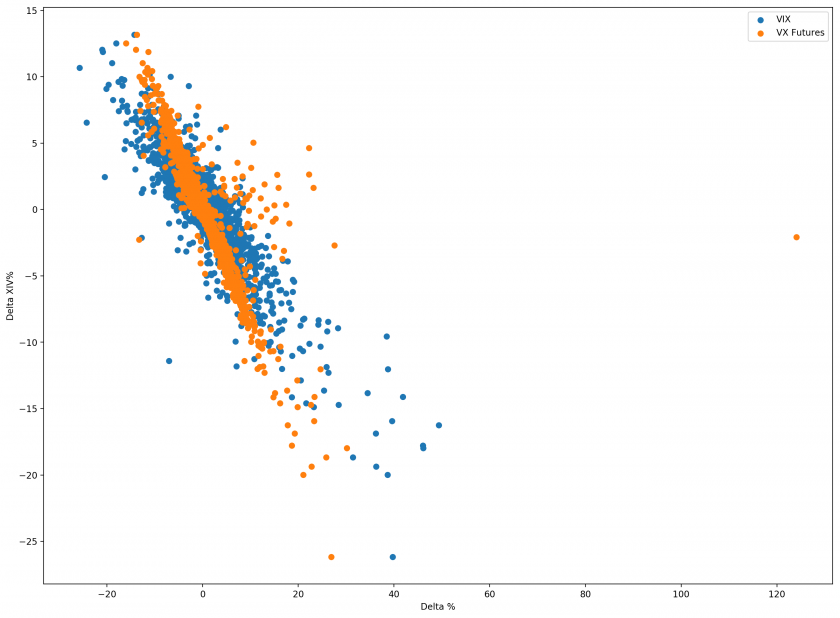 The above plot is an example of this, it’s a plot of the change in XIV from the VX futures, back before XIV blew up. We used Alpha Factoring to look at when the XIV-VX relationship stayed coupled and when it falls to pieces.

Alpha Factoring is a method Mole and I developed for finding relationships between the net R of a trade and the factors surrounding the trade. Initially we used it in developing automated systems, measuring every single variable we could think of and many we thought would be useless. Why? Because we know that we don’t know what we don’t know.

We created an Alpha Factoring module in python that records the gobs of information at entry to a trade, during the trade, upon exit of the trade and post trade to a CSV file that we can analyze later. Either in a python notebook with pandas for us hard core geeks or Excel if that’s more your speed.

How does it work? Once you understand it and go through it once, it will change the way you develop systems forever. And I don’t mean geeky quant stuff that’s 2000 lines of python code, even a simple discretionary system, like my VWAP Warrior.

This is why Mole goes into Alpha Factoring in depth in his System Building Masterclass, which is a fucking masterpiece. It’s rare that you find someone like Mole who has been trading for 10+ years successfully and posting his successes and failures in plain view for everyone to see. That’s how I found him!

I digress. Back to the VWAP Warrior system. I wish I could automate the entries right now, but I don’t yet have my head wrapped around them in a way I can explain it to someone as a clear set of rules, including myself. It’s like creating rules based around price action, like Mole covers in exceptional detail in the Price Action Master Class.

In an effort to automate myself, I’m measuring every single variable I can think of (and many I think are useless) and then will start looking for correlations between the net R of the trade and the Alpha Factors once I get to the 1000 trade mark. I’m confident with enough data, I’ll be able to automate myself and have the AI version of me do even better. 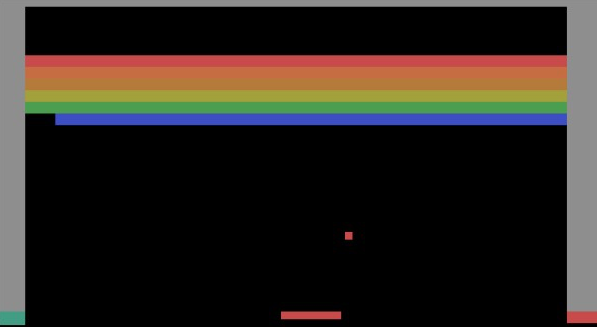 If your familiar with how Google taught an AI bot to play Breakout, that’s essentially what this is doing. In many ways, that is exactly what I’m doing with the VWAP Warrior. Alpha Factoring breaks this down into simple relationships between our results (net R) and things we had no idea where influencing your trading system (such as the entry time). We’re learning to master Breakout empirically.

For example, if I measure the opening gap and find there is a strong correlation between large R winning momentum trades (i.e. large intraday moves that are well above average) and a large opening gap, that’s extremely useful. And I can tell you from Alpha Factoring, that correlation exists. You’re welcome.

We might also find that our particular system does exceptionally well at certain times during the session, such as NYC lunch time. And then very poorly during the last hour of the session. But we don’t know unless we record the details about our trades to analyze them.

Another is intraday range of the previous trading session, i.e. GARCH. Yesterday there was massive intraday range in HOG (Harley Davidson – V-Rod owner here), putting over 14 frogboxes of range on the board. The average intraday range for almost all stocks is around 2.3 frogboxes, so 14.42 is several shit tons of standard deviations beyond the mean.

So today I’m expecting the intraday range in HOG to be well above the 2.3 frogbox average, making it an excellent intraday momentum target. From Alpha Factoring, Mole and I learned there is a strong correlation between the intraday range of the current session and the previous two trading days for most stocks. Since HOG has been so volatile intraday, we can expect HOG to go through a period shortly where it’s unusually quiet intraday, making it a poor candidate for momentum trading. But juicy for mean reversion trading. 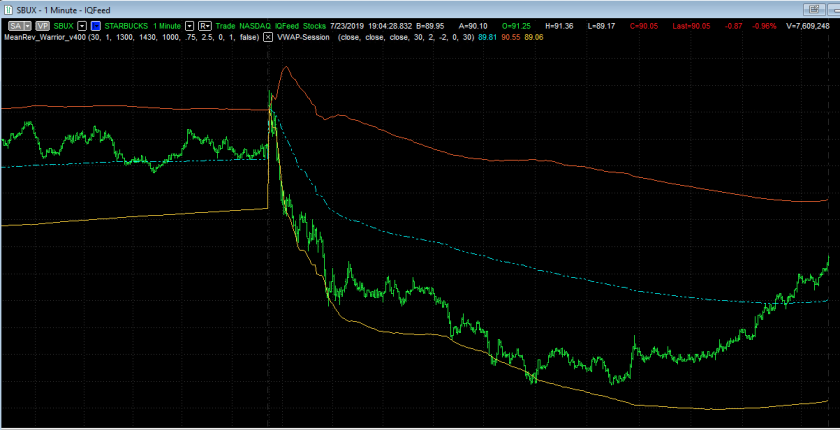 SBUX will probably be good today too, it put 6.02 frogboxes of range on the board yesterday. And SouthWorst LUV and their cattle-call boarding system put up 5.49 frogboxes of range yesterday, I expect it to also be a solid momentum target today. At the other end of the spectrum, AVGO had extremely compressed range yesterday, clocking in only 1.06 frogboxes and JNJ not far ahead at 1.12. I’ll let the astute reader figure out how to trade those fellas today.

Why does this happen? Because intraday range is mean reverting. Duh! It scores as  extremely mean reverting on the Hurst exponent test, which is a full nerd way of measuring how mean reverting something is. If you want to geek out on this, check out Quant Jesus Dr. Ernie MF’n Chan’s blog posts on GARCH. And his second book, chapters 2 and 3 on Hurst exponents and mean reversion tests.

This is the type of pure gold that Mole covers in his opus the System Building Master Class. And you probably have lots of gold right in front of you that would substantially improve your discretionary trading, if you would just measure what you’re doing and then review the data in a scientific way. It’s really the lowest hanging fruit at improving almost all trading substantially.

You can learn this quite easily, in the section on Alpha Factoring where Mole makes it paint-by-numbers simple to start measuring data about your trades and analyzing them for gold.

That’s it for today, I’ll be back in the next few days to geek out on VWAP.