A Few More For The Road 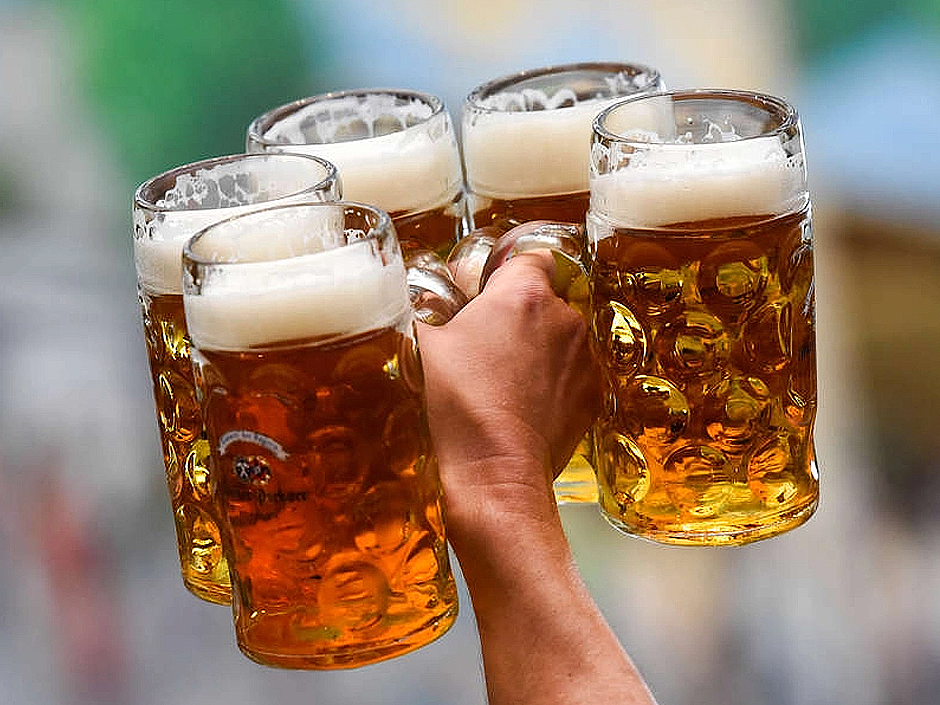 Unbeknownst to most retail rats a fight is taking place in the equities market, and it revolves around an exotic concept only known to a select few in the options trading world. I’m speaking of course about the weekly expected move, and what makes it so important is the fact that much of what drives stock markets these days is driven by the options market. How so? Let me explain.

As mentioned it’s a bit of an exotic topic but it more or less boils down to delta hedging. See, what a lot of large institutional trading firms love to do is to sell large chunks of OTM options whilst doing their best to not let price expire there.

Here’s a snapshot of the E-Mini May 22 contract which expires tomorrow. I’ve highlighted several clusters of high open interest that represent important clusters of OTM options that are being held by large institutions. 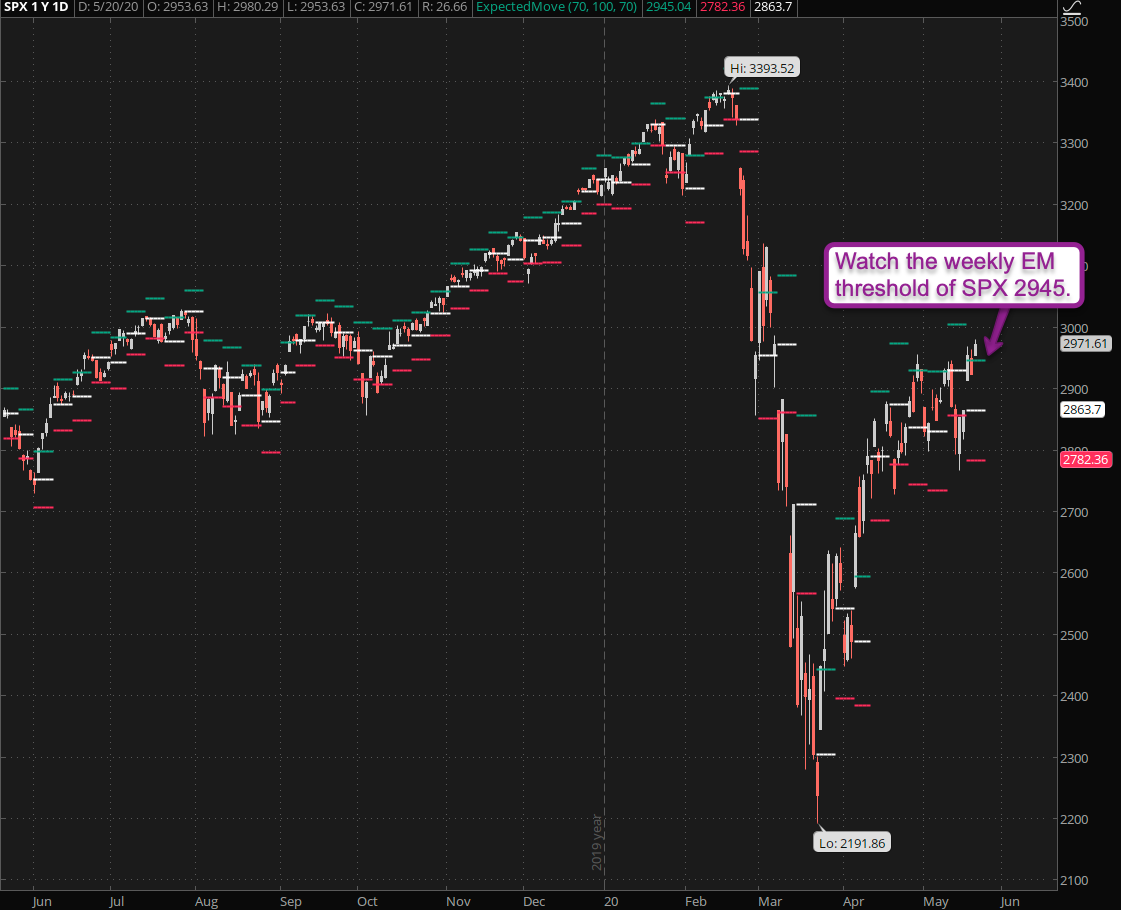 They are usually positioned some distance away from the expected move – weekly as well as monthly. The one shown above is the weekly and thus more closely correlates with the expectations of large market participants.

In contrast here’s the June 20 option contract on the SPX futures – which incidentally are European style options and thus cannot be exercised (if ITM) ahead of expiration – they also do not pay dividend.

Here the upper and lower clusters are more pronounced, mainly because they are based on 30-day expected move, which in this case is around 187 SPX handles.

Do you believe these levels are important? Well it doesn’t matter what YOU believe, as they are in fact extremely important to anyone holding those options.

By having sold those to some hapless retail sucker expecting to make bank these large players effectively have created a high negative delta in their trading accounts. And should any those levels be breached near expiration they are on the hook to buy back those options at much higher prices.

So what to do? Unofficially and legally there’s not much you can do but hedge yourself. In reality what’s happening on a daily basis are attempts to bang the tape by either purchasing/selling large stock or futures positions, both in the E-Mini as well as the SPX. 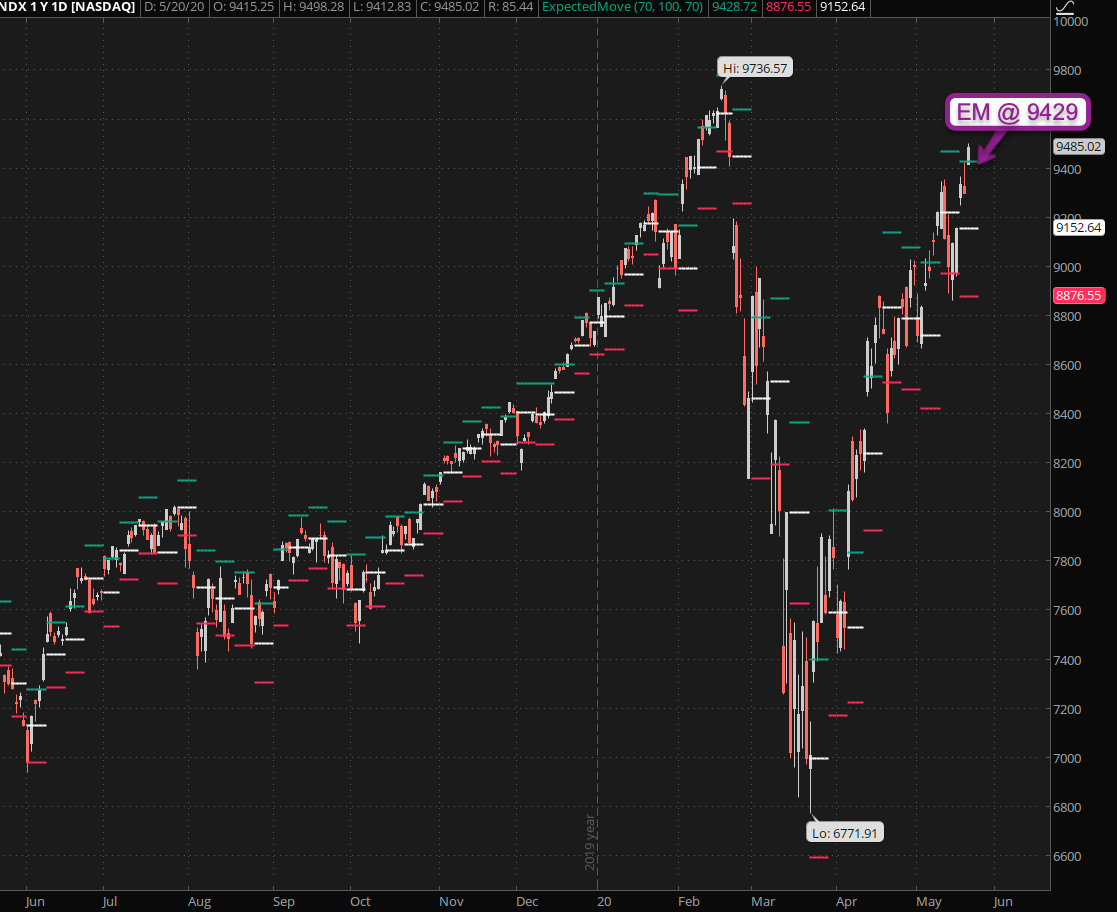 Which brings me back to the expected move. Shown above is the NDX which has already breached its EM and is most likely making a lot of large options sellers very nervous. A close > EM today will trigger additional hedging activity which will propel prices even higher.

Now given that we are in a pre-holiday week (with Memorial Day on Monday) it would not be unreasonable to expect quite a bit of whipsaw over the next few days as big players are duking it out in a low participation marketplace.

No matter which side wins – a close > the weekly expected move would be another win for the bulls and most likely trigger more buying activity after the holiday weekend. 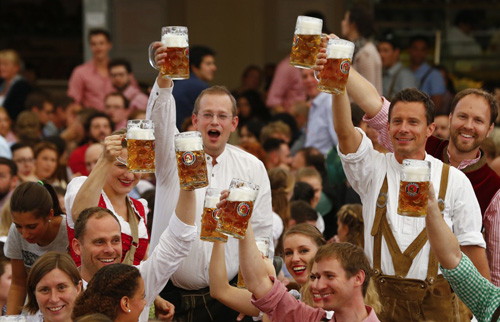 Have a few on me this weekend – see you next Tuesday! 😉