Are You Not Entertained! 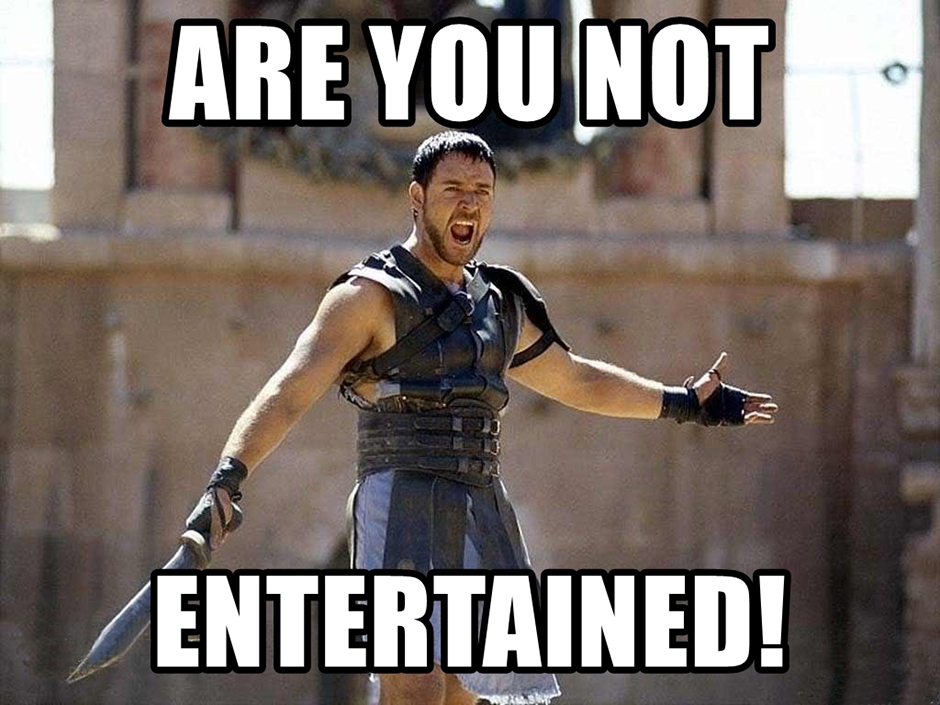 The third week of January 2022 will be remembered as the moment when Lucy finally was handed her well deserved comeuppance. And when I speak of Lucy I of course mean Jerome Powell and his esteemed colleagues at the FOMC. In other words once the realization of higher interest rates and a veritable avalanche of corporate credit defaults fully set in, the equities market decided to send Powell a clear message ahead of this week’s FOMC announcement.

I hope you have your popcorn ready as this week’s dog and pony show surely is going to be one for the ages. I predict much carefully crafted verbiage essentially boiling down to ‘hey we were just kidding – let’s keep killing the Dollar until after the midterm elections’.

Jerome Powell may be a lot of things but he ain’t no fool and he surely knows that rocking the boat and taking down the market, especially in the context of the current economic crisis, would most likely set in motion a full blown long term economic depression and a loss of confidence in the reserve currency status of the Dollar. Not something any Fed chairman wants to ever see happening on his watch. Unless of course your name is Paul Volcker and you got brass balls the size of a melon.

So forget about the prospect of three, four, or even five interest rate hikes. The Fed tried this before in 2018 and 2019 with predictable consequences. So when the Fed announced last December that it would begin to ‘aggressively dial back its bond buying‘ and ‘hike interest rates several times in 2022‘ I couldn’t help but chuckle.

I’ve long maintained that what the Fed says and what it actually ends up doing are two completely different pair of shoes. Again, don’t listen to what they are saying, pay attention to what they are doing, or in this case, what they are able to do without cratering the stock market and the economy. I don’t doubt that Powell et al. would prefer to take measures to curb run-away Dollar inflation, however there’s just one teeny tiny problem with that.

Over the past 13 years the Fed basically painted itself into a corner and any further monetary easing, in whatever shape or form, is tantamount to pushing on a string. I have no doubt that they’ll try their best to mitigate the damage unleashed onto equities but the question remains what measures exactly could be deployed that haven’t already been tried before?

I remain in eager anticipation of a convincing plan out of this monetary conundrum. 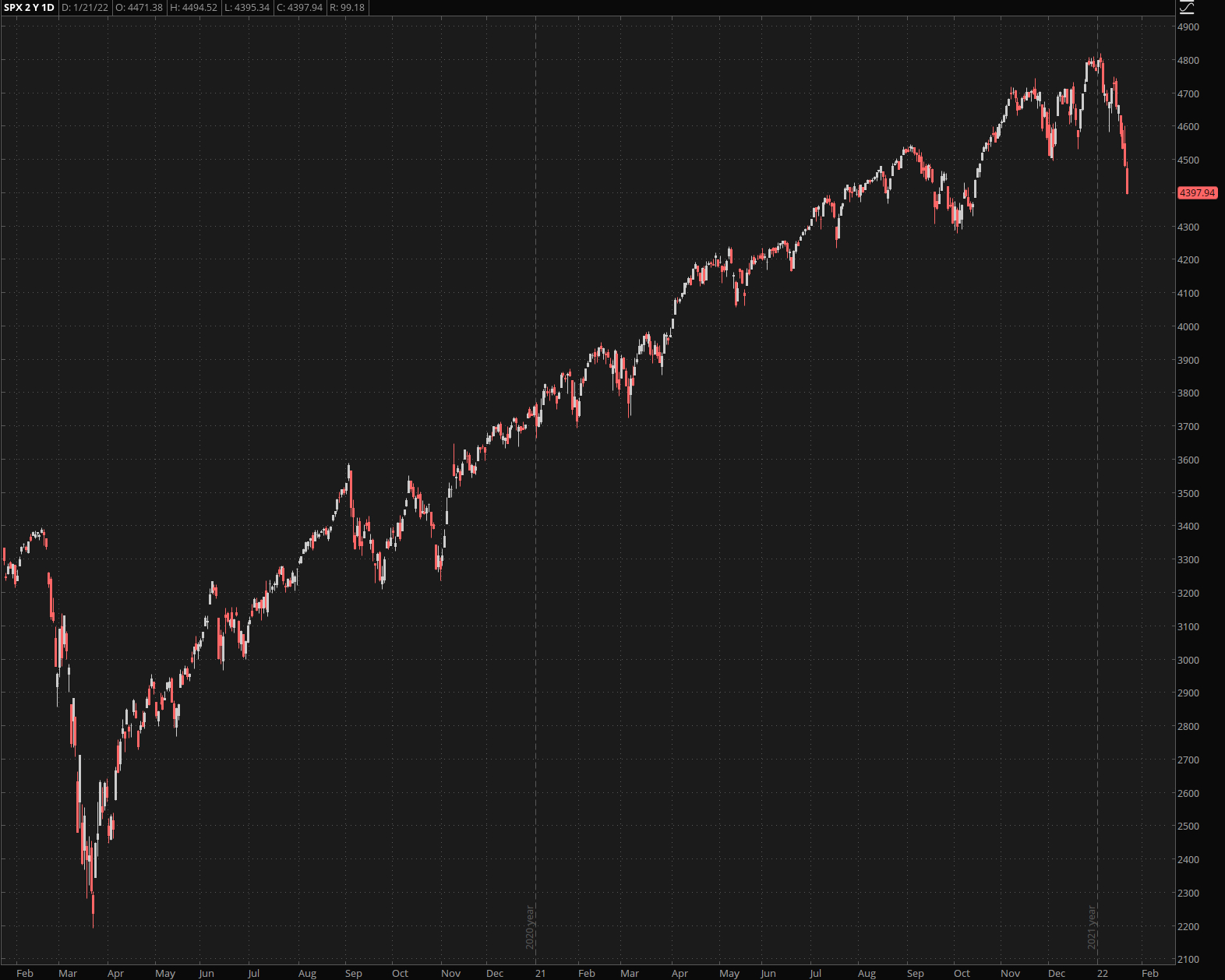 Let’s set the stage first by showing you the magnitude of last week’s wipeout on a medium to long term price chart of the SPX. If you think a formation like that ends in a v-formation courtesy of the Fed’s Wednesday announcement then I have a bridge in Brooklyn to sell you. Let’s not forget that this happened during a 4-day post MLK-day trading week, and while HV snapbacks always happen I don’t think we’re out of the woods by a long shot. 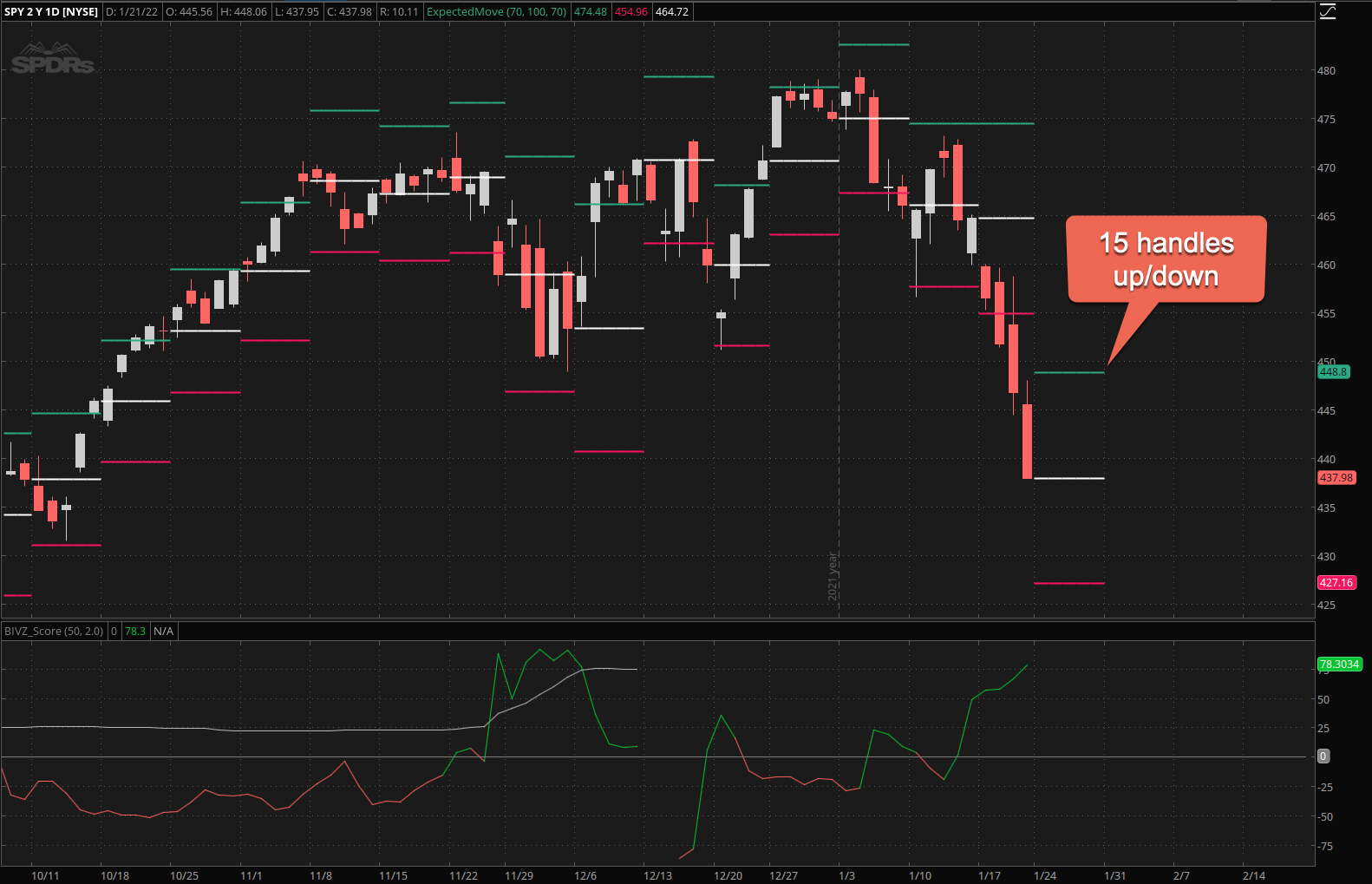 The expected move on the Spiders for this week stands at 15 handles which means 150 on the SPX. During the COVID crash in 2020 we were blessed with a range of almost 200 handles but clearly the market expects movement this week. So strap on a helmet and keep your hands and feet inside the vehicle at all times. 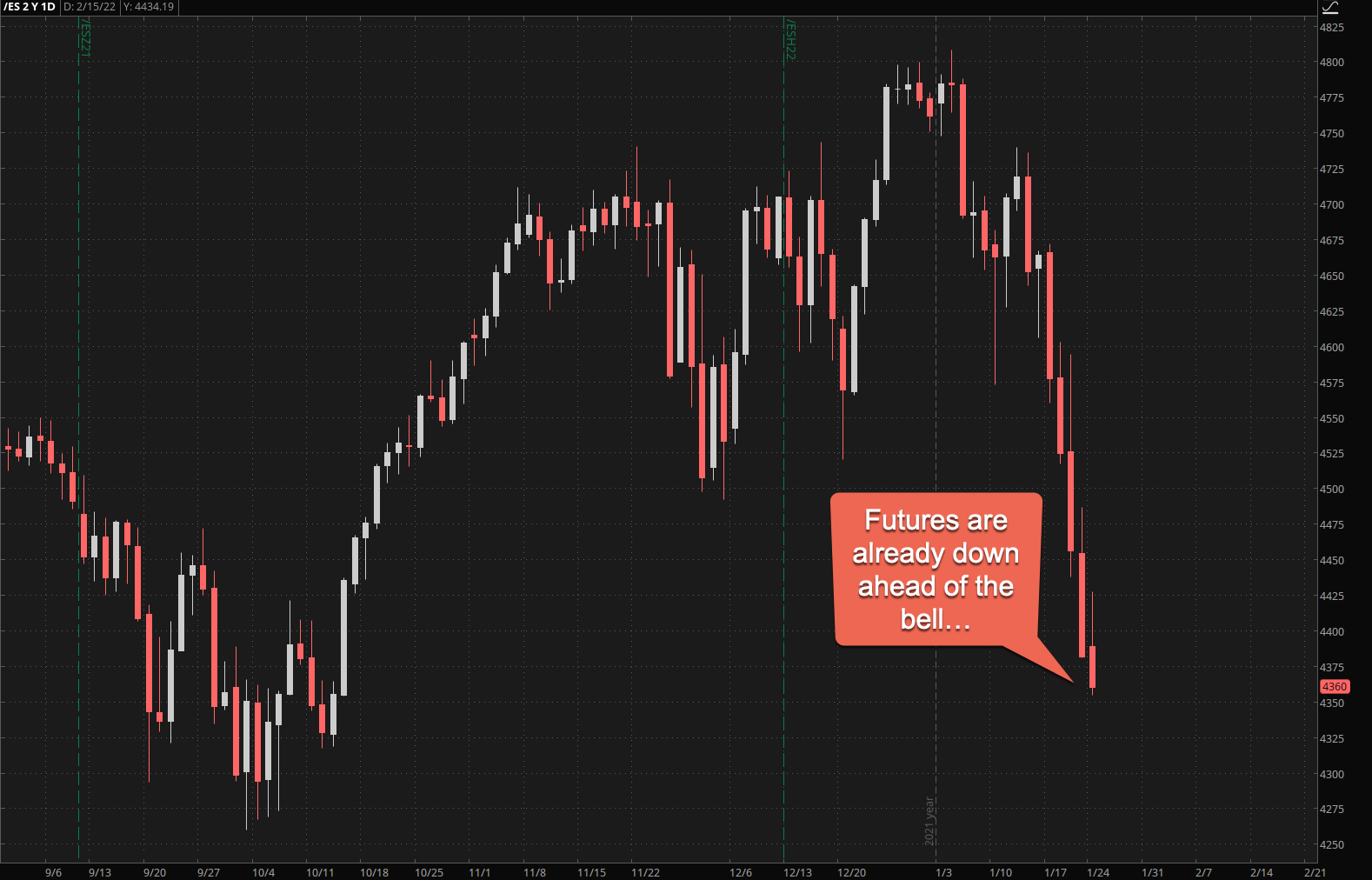 The ES futures are already down ahead of the bell and although that may just be an attempt to scare the children ahead of a ST bounce it’s not exactly confidence inducing. 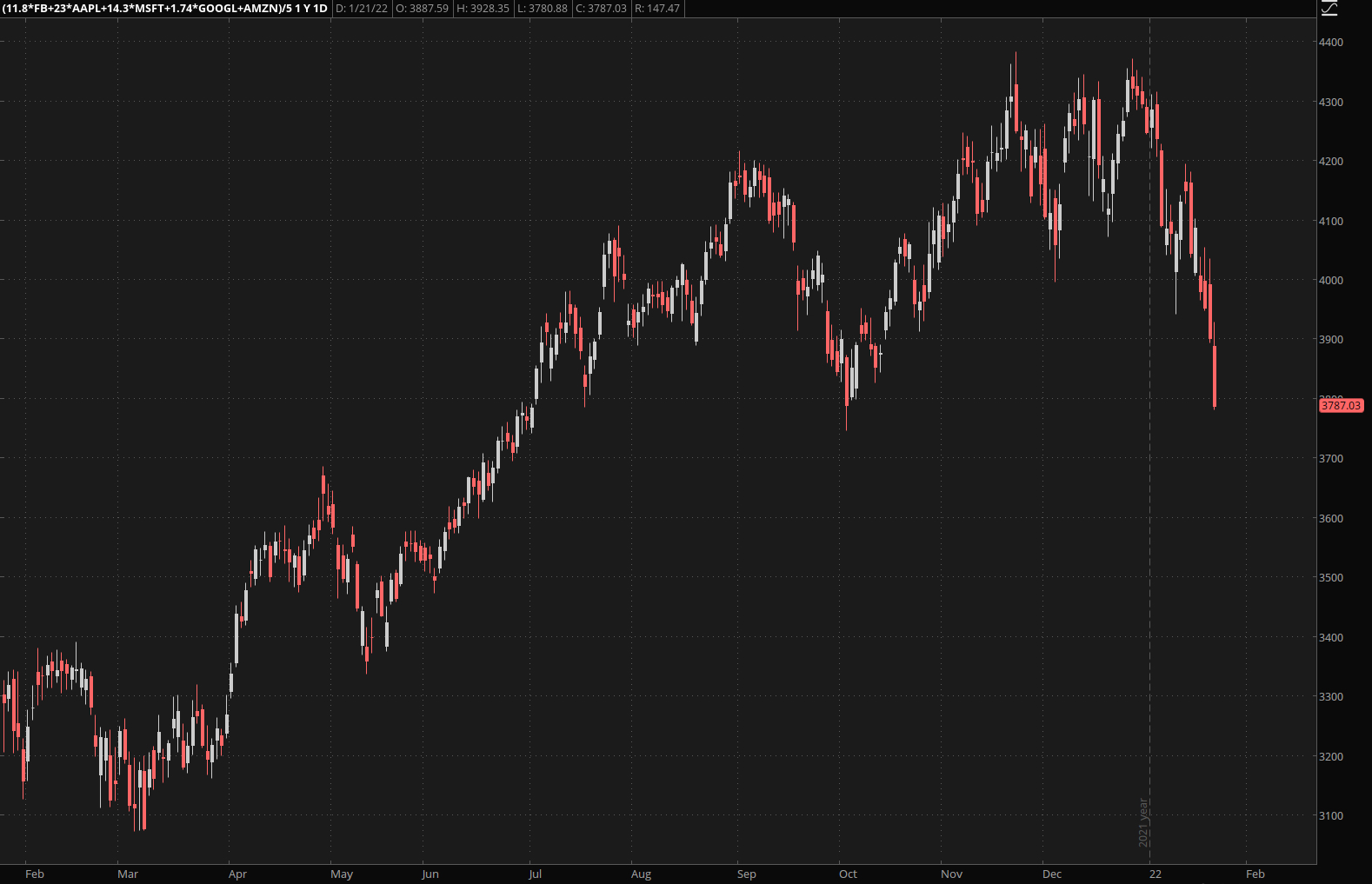 To no ones surprise big tech got monkey hammered particularly badly and a breach of the previous spike low from last September could trigger a drop down to P3 or lower. 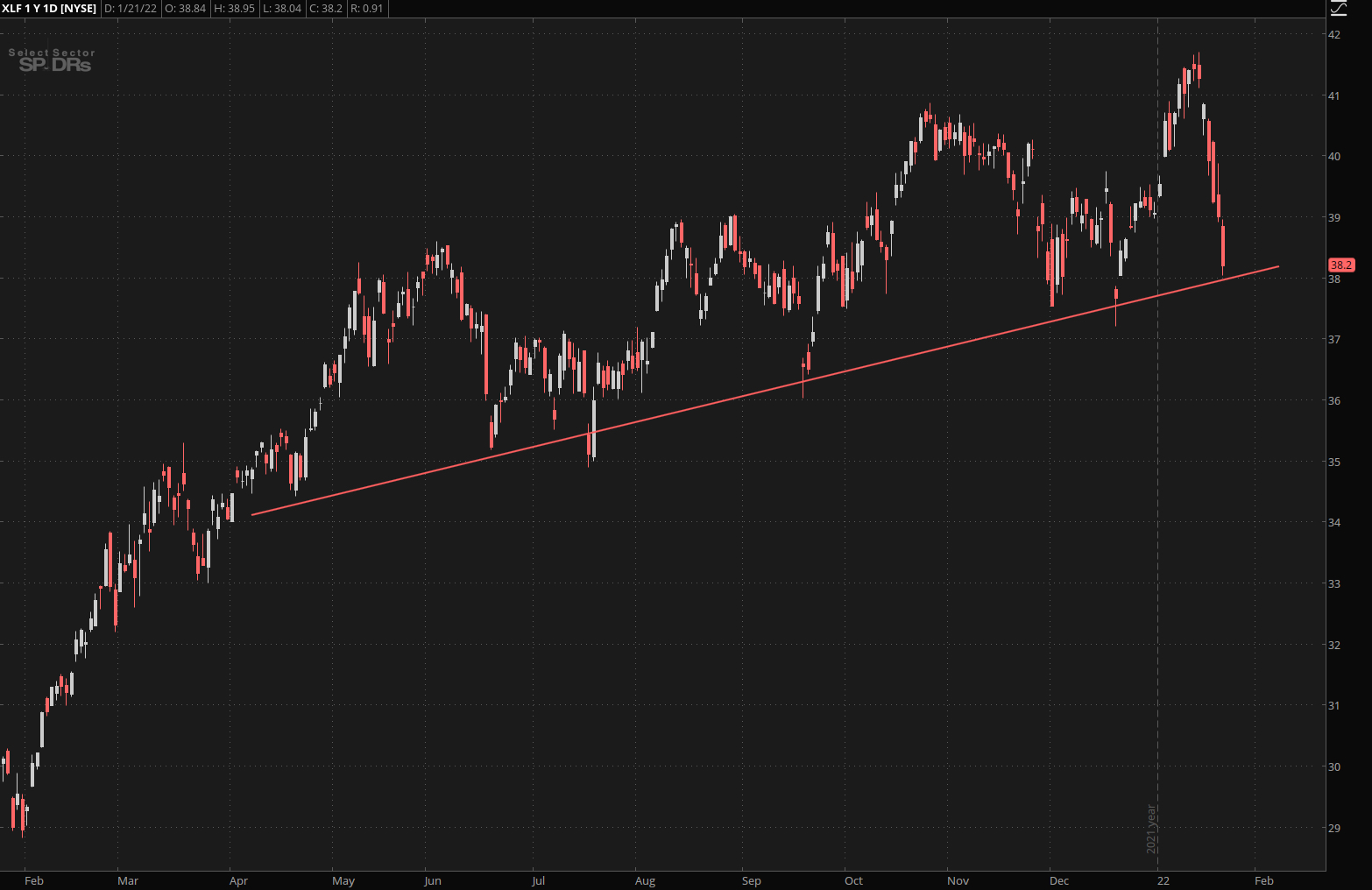 Finance in comparison held up reasonably well, which again isn’t a huge surprise as it had been among the strongest sectors in equities over the past few months. However, as panicked buyers are rushing into bonds now (more about that below) we may see things turn from bad to ugly here as rising bond prices mean lower interest rates for corporate credit holders. 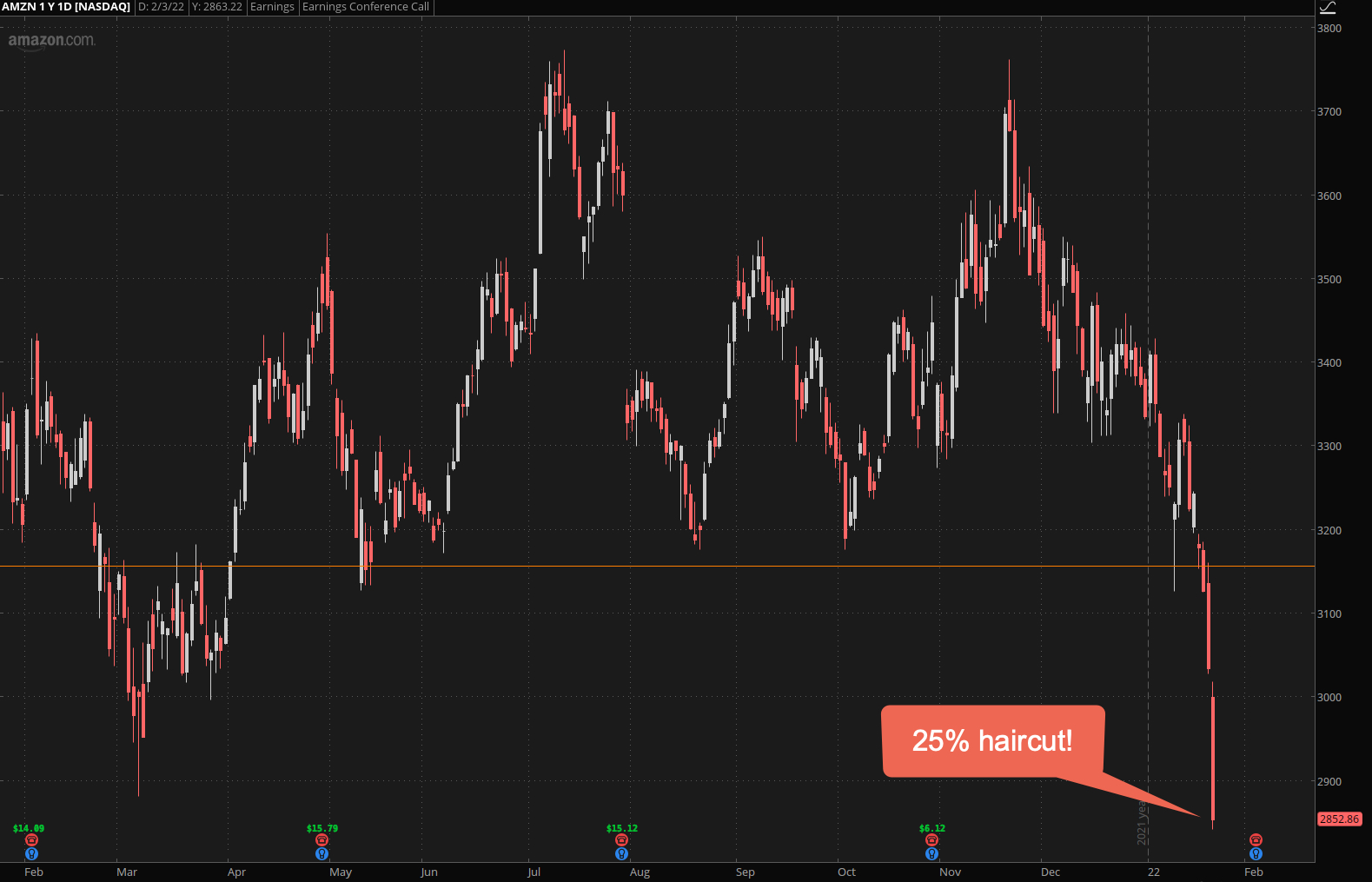 Once the darling of the stock market AMZN was boot stomped Monty Python style and closed down 25% from the November highs near 3750. 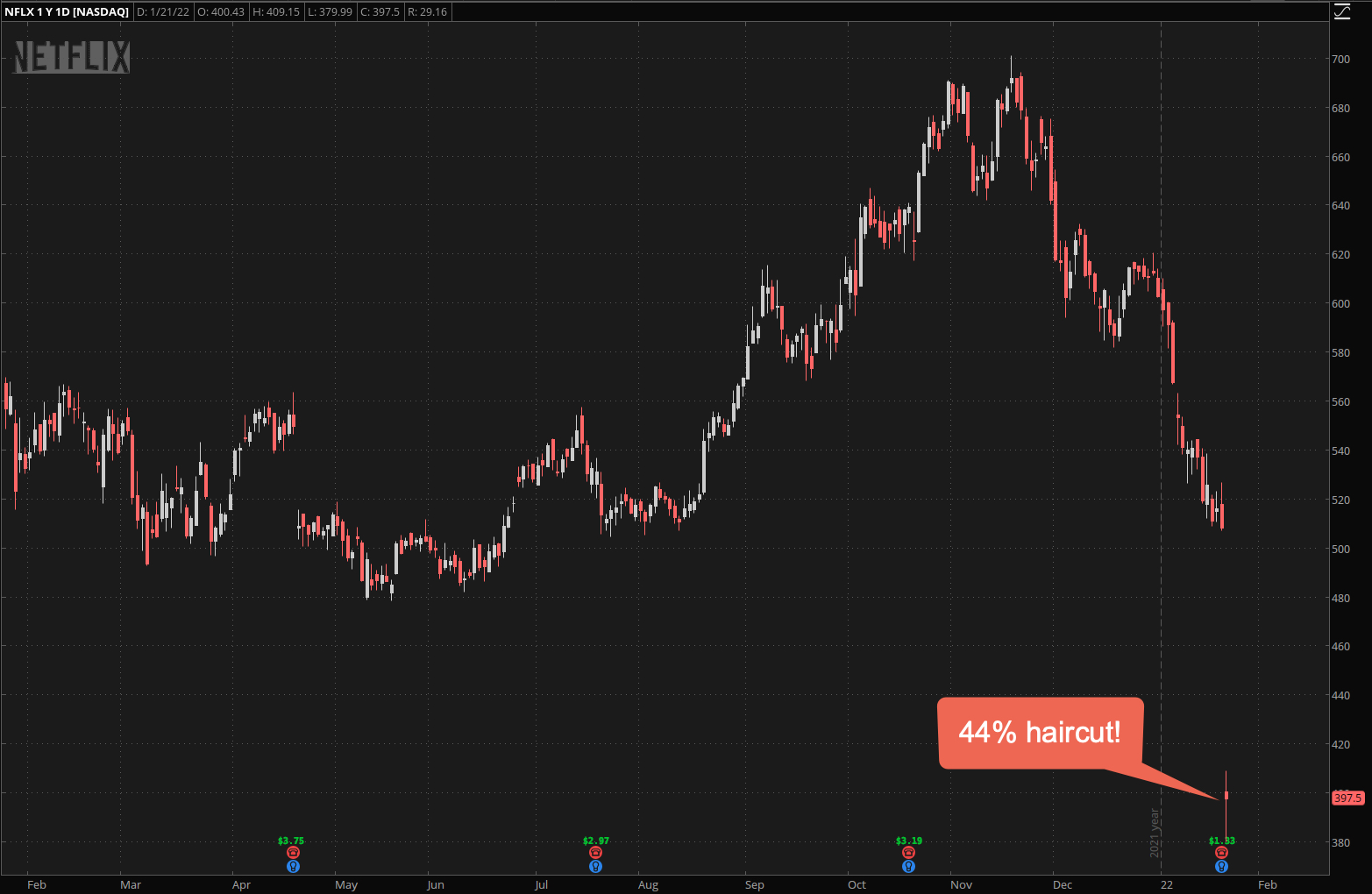 That’s nothing compared with Netflix however which fell so hard that it left an impact crater on its chart. Interestingly it actually beat earnings but user growth largely missed estimates, a growing issue Netflix has been battling with for some time now.

Okay now let’s get to the interesting stuff and plot the possible paths ahead: