Allow me to quote yesterday’s setup on the E-Mini: “What’s important to us steel rats on the outside is that we are about to reverse an old NLBL (it is officially expired) and may just drop back below that 100-day SMA. Yeah, maybe it’s a fake out – thus we are long as we stay above it and short as soon as we drop below the ole’ Maginot line.” 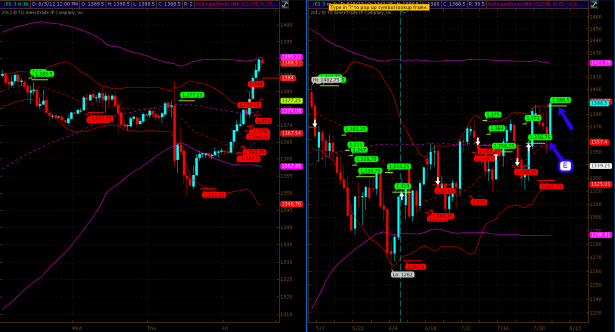 Well, Ms. Market did try to fake us out but in the end the spoos held the 100-day SMA at the bell. Which means you were either back in cash or long with a stop right below that 100-day SMA. Obviously I hope it was the latter – but of course nobody could have predicted such a huge jump one day later. As the old saying goes: Sometimes it’s better to be lucky than to be good 😉 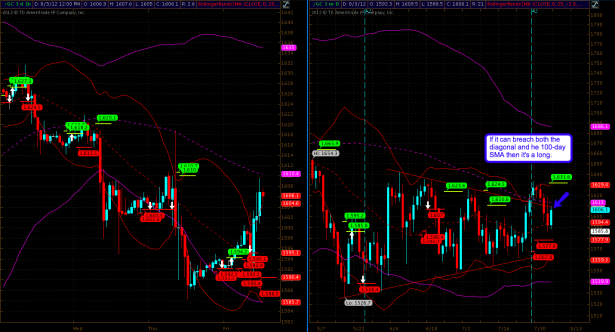 Another setup we got lucky with is gold. I suggested yesterday to take some short positions off the table and if you did then all that’s left in the running are those lottery tickets we kept for a touch of that NLSL. As we are now right below both that upper diagonal and the 100-day SMA it may soon be time to pull the plug. Personally I will keep mine in the running until we breach both resistance lines looming above. If that happens then I want to be long. Yes, again – I have an inkling it may be worth the pain. I can be rather persistent if I see a good thing in the works. 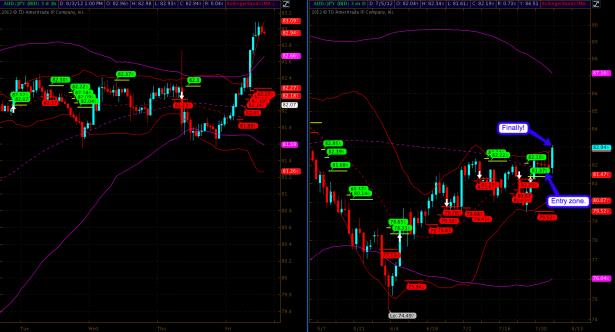 One setup that finally rewarded patience and admittedly mind numbing discipline is the AUD/JPY. While we experienced quite a bit of whipsaw on some of our other FX setups (and that’s an understatement) this one was clinging to its 100-day SMA like Scrats to his acorn. Plenty of opportunities to get positioned with very little risk. And finally today – lift off! Obviously it’s very tough to make any predictions with sentiments swings like we have witnessed in the past few weeks, but I’d say this one has pretty good odds of holding its Maginot line and perhaps even going all the way.

Otherwise I see very little that I would touch with a ten foot pole right now – all that whipsaw has introduced a certain degree of noise into our charts. This tape has become way too emotional and the slightest trigger now causes wild swings, having us alternate between short squeezes and long squeezes (the P&F I posted yesterday makes that very point). What we need right now is to let the technicals catch up with the tape a little. The danger of wild gyrations like this is that you may start trying to force things and in the end resort to over trading. Best to slow things down while we’re ahead – ergo let’s call it a week and wait for better odds, shall we?