Back to the charts…

We got a nice election rally today.  $INDU rose up 305 points, right into diagonal resistance, and just cracking into my target range.  What is even more exciting than that is the divergent momentum on which we are rallying (had to edit that for my English teacher (holla!)).  What momentum indicators are those?  Well, you should know my “standard” MACD is divergent (both histogram and 2-lines), ATR is horribly divergent (this could be due to the boring action we have been having, but can also be used to support waning strength), as well as a few others I won’t mention. 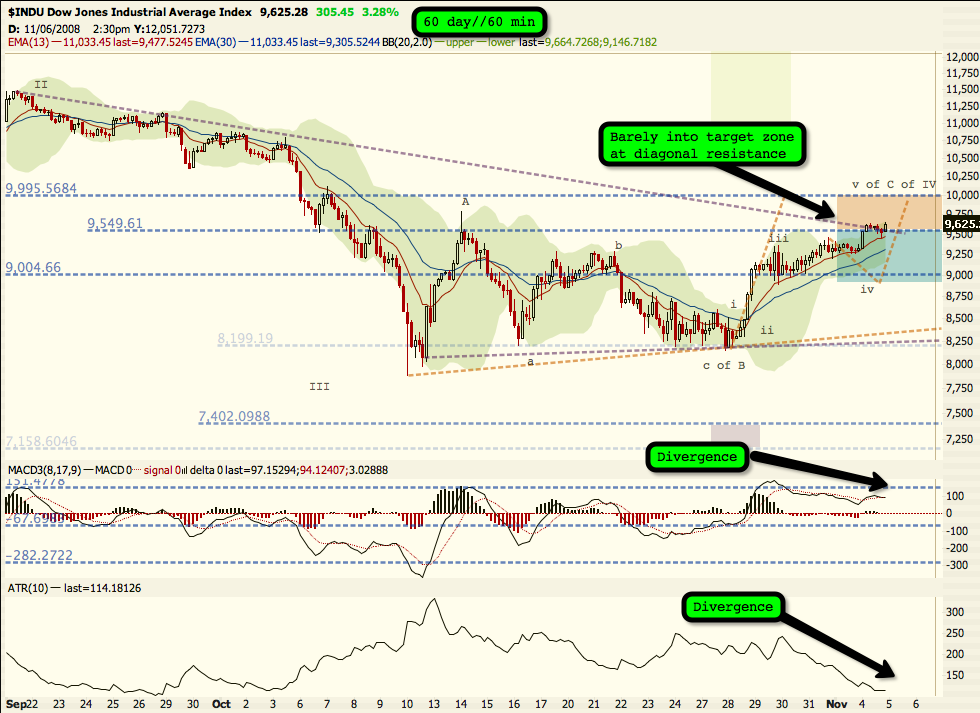 We are also poking the upper bollinger band, and with this amount of divergence, another close inside (assuming we get back outside) would be a quality entry.  I will touch on that most likely sometime this week. 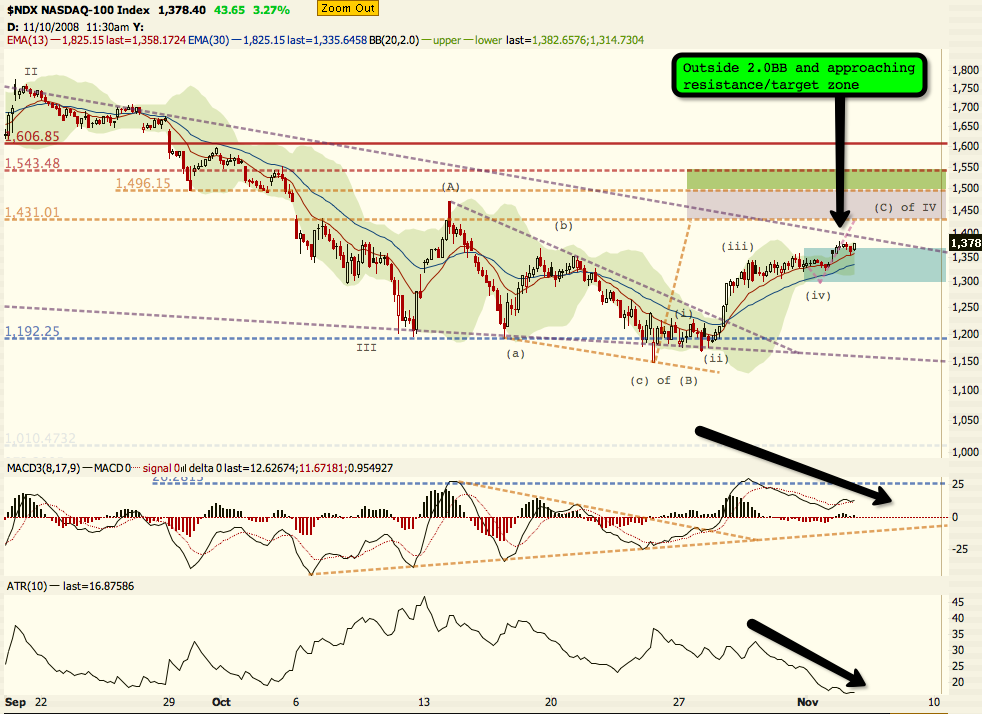 There are similar conditions in the $NDX… Outside 2.0BB, divergent MACD, divergent ATR, approaching resistance, and barely into target range.  As it stands to me, the $NDX is painting the most clear wave pattern, and that is a simple flat.  As you can see from there chart, the lines hardly need moving.   I do expect a push higher, likely to 1400, and we will take it (most likely down) from there.  Should the $NDX manage to scrape above 1430-1450, it will be very hard for me not to resist shorting (buying puts) some high fliers.

I want to put in a little blurb about the $VIX, but I do not have a chart prepared.  I have gone back to all data and gauged the weekly (using closes) range of the $VIX in the 2000 Bear market.  The UPPER boundary of that range is right around the 46 level (i.e. we are are retesting resistance from the topside before it becomes support).  The most notable thing by far that happened today was with the $VIX however.  We pushed outside of the 2.0 BB, but failed to close with that level.  What does this mean?  This is the precursor to my standard sell signal (which is immensely more accurate than the buy signals).  Should we get a close outside the 2.0, I will be the first to let you know.  But, sell signal or not, the $VIX confirms that the emotions of the herd have swung very quickly from the most extreme fear we have seen in decades (if not ever), to levels now considered “under the norm.”  Though the $VIX has been cut in half in less than 10 days, so it is quite remarkable that the BBs have allowed mid-40s to be considered sub-normal.  As I said, no chart now, but should we get the sell signal, I will be extremely happy to post my standard $VIX chart.

Okay…Nobody call me crazy.  I am seriously going out on a limb here so you guys can see how my brain works.  I am going to post a “chart” below, and you guys let me know if you can follow my logic, or if I am completely bonkers.  Think about this from a fractal perspective, knowing that markets move in similar “patterns” of different “size” with slight variance in time or “shape.”  That said, put you beer goggles on and gaze in wonder (Note: Beer goggles are NOT required).  If anyone can tell me what ticker and what days I am looking at, I will be modestly impressed (I would like to think I have made it a little tricky). 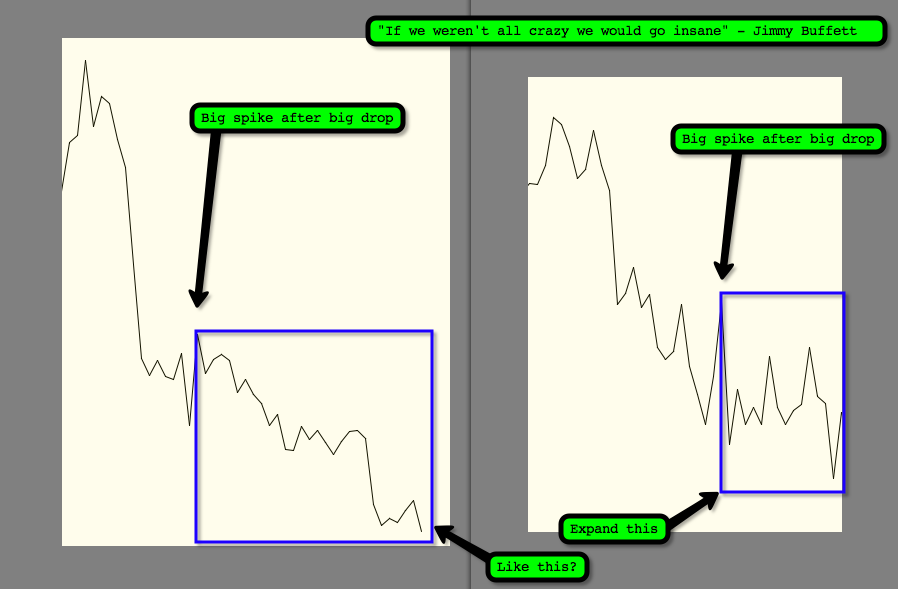 So what is it?  Can you see the similarity, or are you all currently fleeing from the blog because you think I am a complete nut (if you flee now, you will miss some good trade ideas)?

And now to assure you that I am not REALLY crazy, check out CCJ.  Fits the same bill I have been laying out all through this post… divergent (MACD, ATR, Volume), outside BB, at resistance, and is also rallying in a nice channel.  A push up towards 20, and I will be buying up puts.  If we don’t make it that high, I will be forced to trade the break-out move. 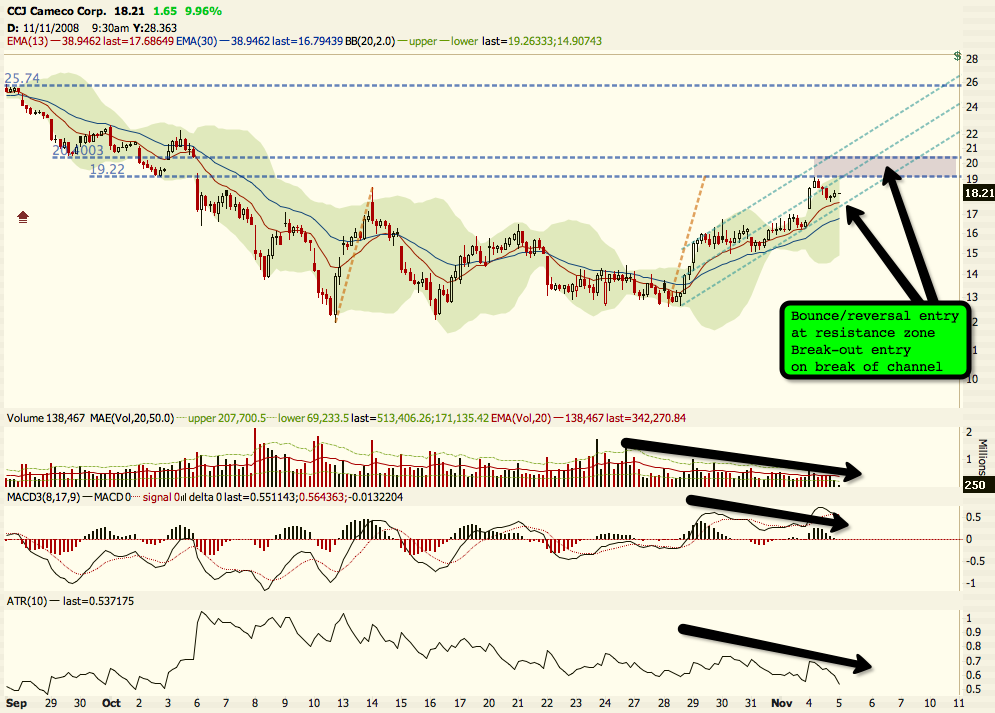 One last gem for the road is CHK.  Nice ascending triangle in a downtrend (i.e. bearish wedge).  Stiff resistance around 24, and highly divergent on MACD, ATR and volume (are we starting to see a pattern?).  Again, two buying ranges here, one is the aforementioned resistance at 24, the other would be a break of the rising resistance line which should pass through 21  (and higher) tomorrow.  Two targets on this guy too.  A secondary resistance cutting through the 17.50 range, and the previous low of 12, which would represent a 50% decline from an entry at 24… Any takers? 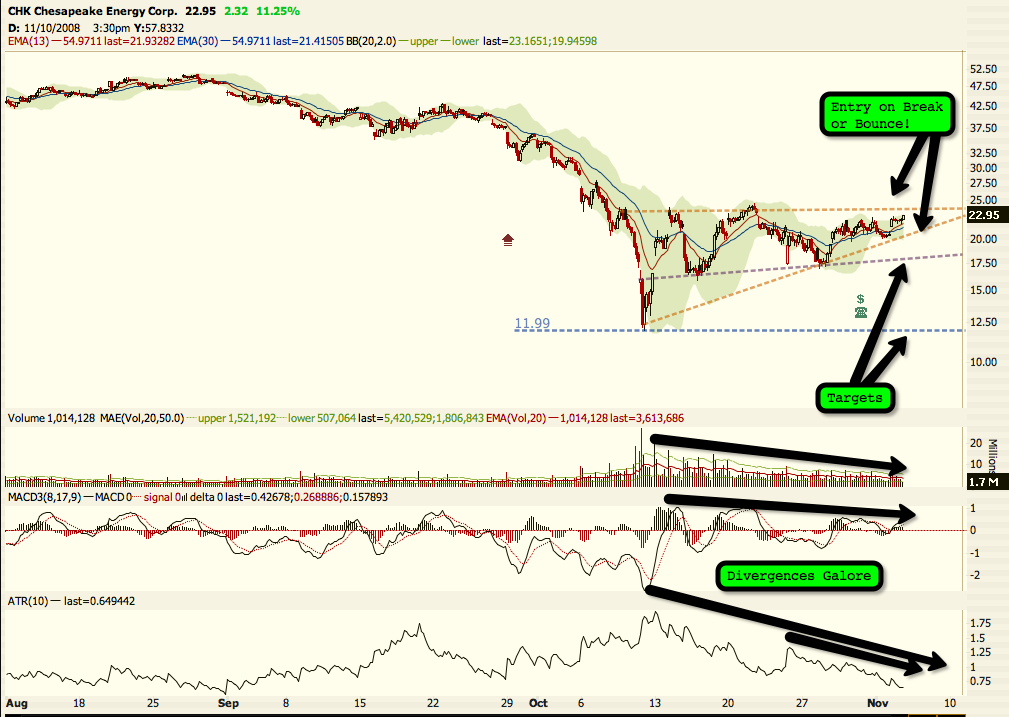 Given all the ideas we have thrown out there today, y’all should have plenty of homework to do.