The game is the game, ladies. Either you are playing it or you are being played. Banking coin in the past few years has largely been about mastering trading psychology and not about technical skills. By that I mean of course that technical skills are essential but how you interpret the readings in the context of the current situation is what it is all about. In other words – in order to live, do I give Pussy a promotion or do I take him on a long boat ride? 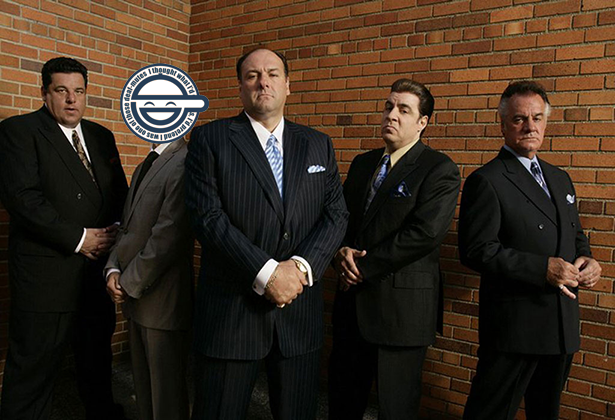 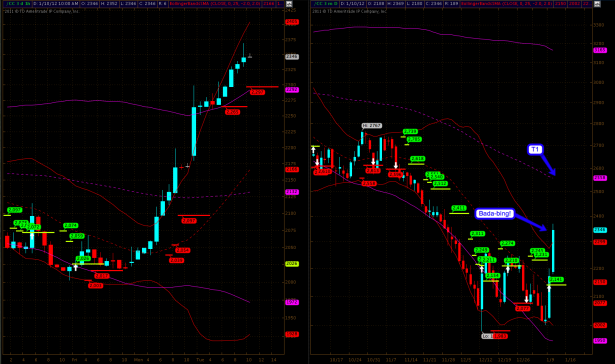 Bada bing and bada boom! Yes, of course I’m talking about our cocoa trade. While the field mice remain hypnotized by the Dow’s daily gyrations there are tons of solid technical setups in other markets that remain largely ignored. I told you guys that hitching a ride on this puppy would take some finesse but that it would pay off in the end. Well – there you have it – now catch me if you can – my initial target is around 2500.

Equities? Fuggeddaboudit! Well, not really – I do have some pertinent perspectives – please step into my dusty lair: 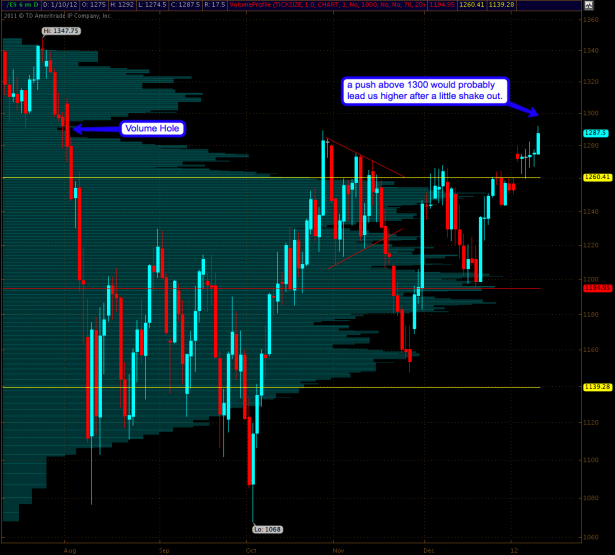 We pushed short of 1300 this morning but I don’t see any real juice in the tape – Zero subs know what I’m talking about. Although I wouldn’t pawn my grandmother on this I don’t think that 1300 is yet in the making – most likely we fall back a little and then we may see a continuation higher.

Per the inverse H&S: Yes, we had a bit of a sideways correction but it simply doesn’t feel evil enough just yet. If I had some muscle in this tape I’d drop this sucker back below the neckline just for the fun of messing with those retail piggies.

The reason why I wouldn’t bet any of my nearest family members on a reversal here is twofold. One we almost breached that volume hole this morning and still may do so today. Second resistance is rather soft up here right now and thus we may just go all the way. 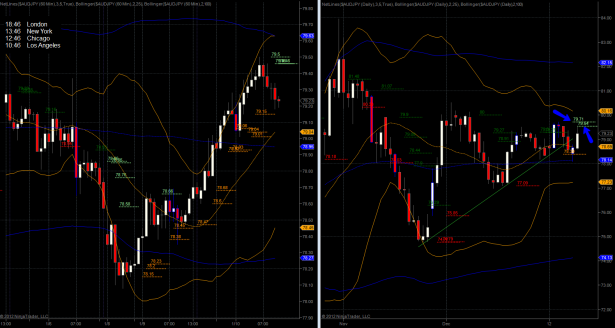 Doesn’t mean I’m completely useless however. Here’s a clue – instead of the spoos I suggest we watch the AUD/JPY instead. That one almost exactly bounced back at its 79.54 NLBL today and there’s one at 79.71 right above (on the daily panel). I’m pretty certain the AUD/JPY is going to lead this advance or will give us early indications of a failure. I would also watch our for a drop through the 78.39 NLSL – that would be a strong hint that things are going to turn on the equities side. 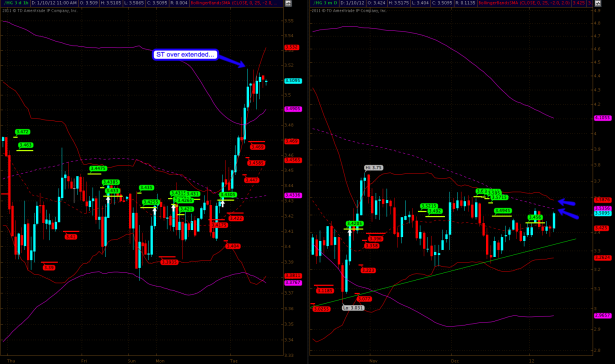 And then there’s copper which is now facing heavy resistance in the form of its 100-day SMA and the 25-day upper BB looming right above. I don’t think a drop in copper here would affect equities all that much but a break above those two lines would be immensely bullish for equities (and copper of course) IMNSHO. 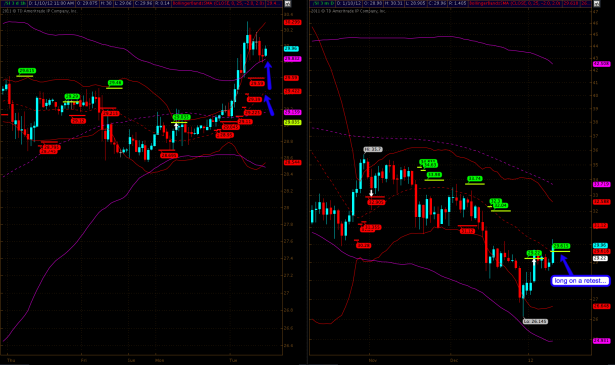 Finally we have silver testing its NLBL at 29.615, strategically near its 25-day SMA. Now silver has been boring as of late but I would be long here on a retest with a stop right below that SMA.

Bottom Line: Given some of the extreme Euro sentiment out there (i.e. everyone and their mother was bearish) I do expect a continuation up here medium term. But seasonality is iffy right now plus several indicators on the momo side suggest we are overdue for a shake out. So forgive me if I continue to play Doctor Buzzkill and suggest caution when it comes to trading equities right now. If you do – keep it nimble and don’t over extend yourself due to either greed or fear of losing out on a big move.