If there was one salient sentiment that was apparent in today’s comment stream it was the smell of sweet and unmitigated capitulation. One by one even the staunchest rats relinquished their short positions to the relentless high velocity razor blades yielded by sadistic market makers eager to squeeze the last drop of blood out of the remaining intrepid but battered bears. It was another Kodak moment for the bulls – one that deserves entry in the annals of humiliating bear defeats, which will be savored by future generations of bulltards for decades to come.

Forgive me for saying so – but I’m getting excited. We have reached the point where the death of the bear is being widely celebrated. Financial news reports are now unanimous in declaring this recession to be over. It’s the very moment I have been waiting for – and it’s a sign that Primary {2} is slowly drawing to a close. 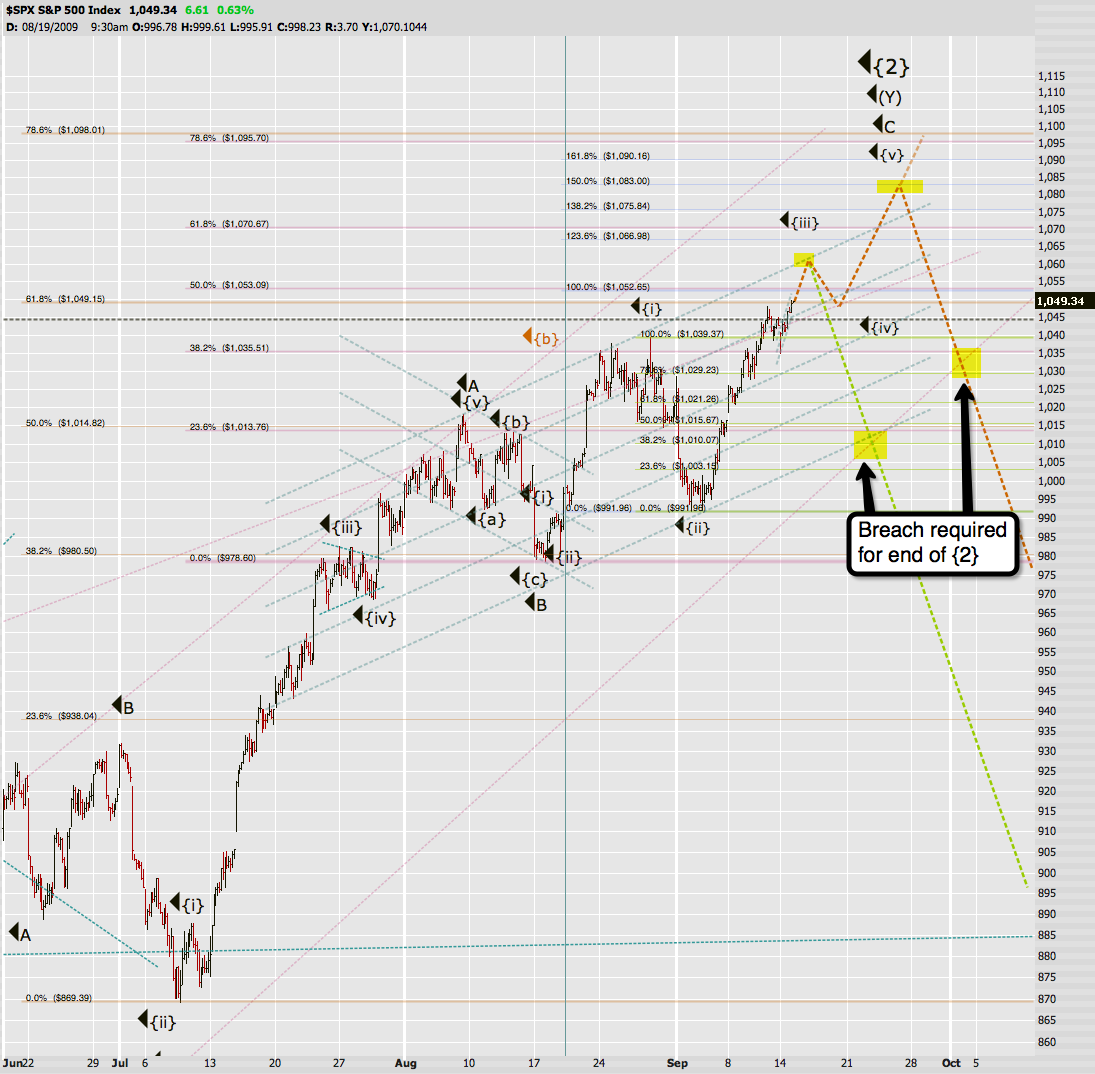 Of course I’m talking long term here – and how slowly is the key question tonight. Short term we most likely have more upside ahead of us – I have been pointing towards the 1060 – 1080 cluster and we might even see 1100 before it’s all said and done.

And that’s pretty much all that’s to be said about it. This market is going to be melting further up until there are no more suckers left to sell to and I do believe that we’re getting close. When exactly the turn will happen I do not know and I don’t want to pretend that I do know. I can paint fancy charts all day that attempt to make sense from a wave count perspective. But we all know that technical analysis an inexact science at best (and hubris at worst) and that an advance cannot be declared as complete until certain support zones according to our stringiest rules have been breached. Right now we are far away from such a moment as evidenced by today’s early morning drop which was met by an instant HFT sponsored reversal.

Please recall that tomorrow is another POMO day which will pump some of the remaining Fed liquidity into the pockets of trigger happy prop desk junkies. The futures are down a bit right now – so, let’s make a quick guess as to what tomorrow’s tape might bring – a financial weather report of sorts:

In the morning light showers with some sporadic selling pushing the SPX slightly below VWAP. Early afternoon will bring higher temperatures with some sideways whipsaw occasionally reverting towards VWAP. Expect sudden spikes, hail, and green flashes towards the EOD when brand spanking new POMO cash gets levered into painting futures to new highs. Expect the Dollar to remain stuck in a low pressure zone with potentially new lows reaching 76 Fahrenheit.