I just came home from the hospital – sorry for the delayed post. Thanks for all the well wishes but no worries – I’m okay. I somehow acquired a nasty bursitis on my left elbow and needed urgent treatment. Thing is that almost all doctors (and most Spaniards in general) take much of August off and it’s almost impossible to find a specialist until September.

I was in the middle of writing my post earlier this evening when I caught a break and got a call back. Which however required me to drop everything to get the last available appointment before the weekend. The good news is that I’m all taken care off and in much better spirits than earlier today. Since it’s pretty late over here (past 10:00pm) please forgive me if I rattle through today’s charts rather quickly. There’s actually more going on than I would have expected, so let’s get started. 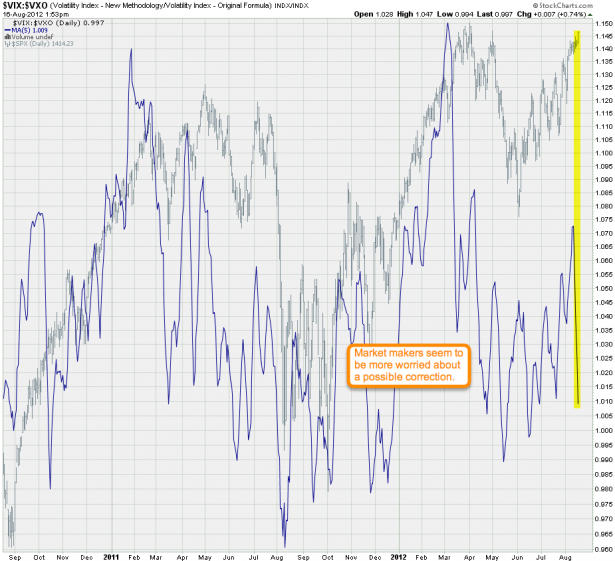 As you all know I have been sitting out the current short squeeze intentionally. Meaning – I saw it coming [1] [2] but decided that the risk far outweighed the potential benefit. Adding additional fuel to my lack of comfort in participating in this push higher is my VIX:VXO ratio chart. Apparently market makers are starting to price in some downside risk – which leads me to my next two charts: 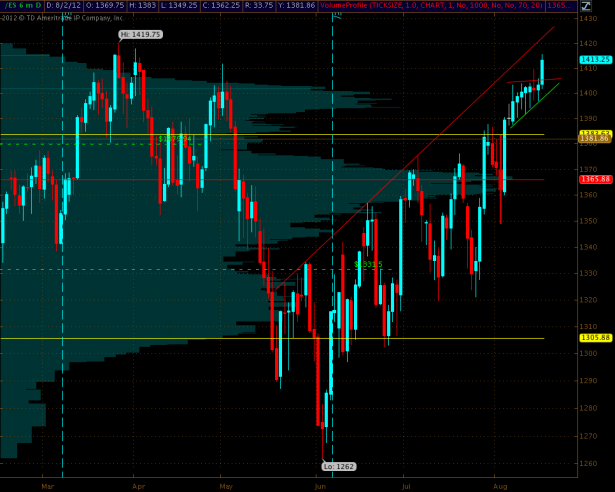 Targets right – I did post about that before and little has changed. There’s that rising diagonal on the spoos and that shows us resistance between 1425 and 1430 – depending when we get there. In terms of volume there’s very little but that apparently has not meant much today. 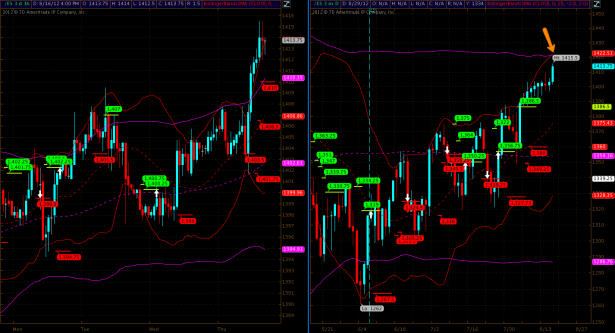 Then there’s my double Bollinger chart – that one shows some resistance near 1422. Whether or not we turn there is another question but I think it should be good for a red candle or two. 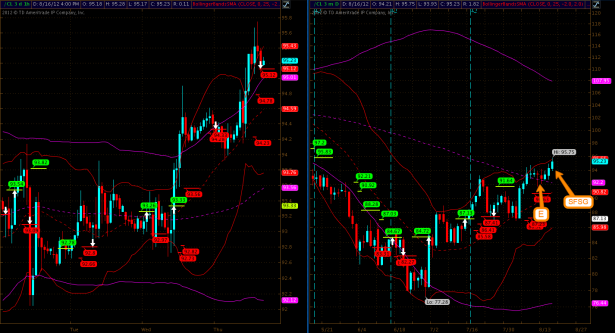 We’re catching up with crude – we did get several entries near the 100-day SMA and it seems we are off to the races. So far so good. 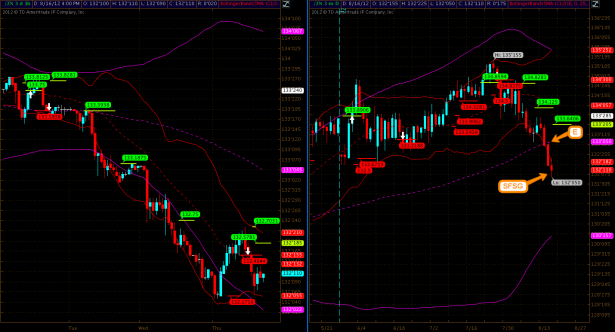 10-year treasuries. I suggested a long trade at the Maginot Line two days ago. When I went back today I realized that I did NOT point out that a breach would put us into short positions – I usually do but for the record I have to concede that I forgot this time around. But I hope you subs will back me up when I humbly point out that this goes without saying for any stainless steel rat – we have been trading 100-day SMA breaches for ages here. In any case, if you flipped this trade then I suggest you hold short. 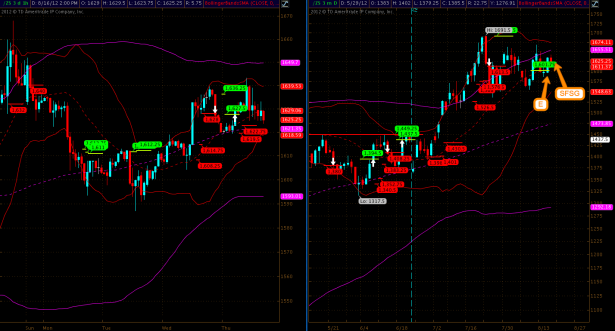 Soybeans – holding the NLBL – so far so good. Caveat – NLBL is expiring tomorrow, so we I would use yesterday’s lows as my stop. 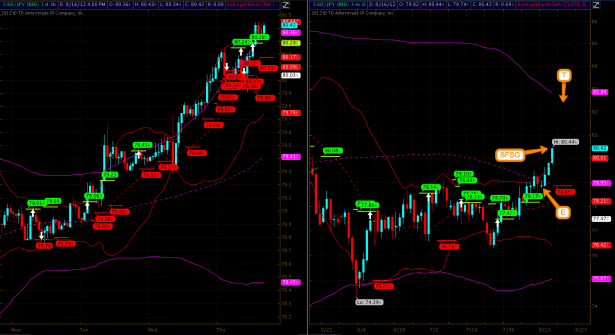 CAD/JPY – great entry we got there and it’s proceeding upward just as hoped. 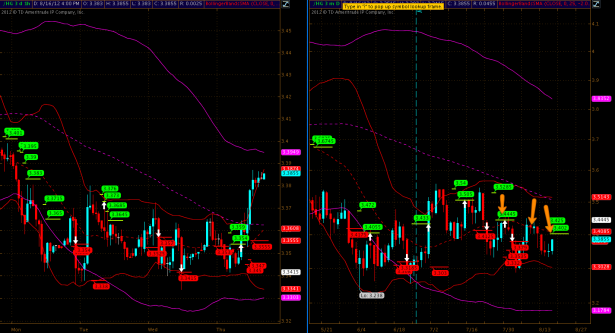 Copper is testing its NLBL – the same it has been failing for the past few weeks. I would be short here but definitely flip into a long if we see a close above that NLBL. 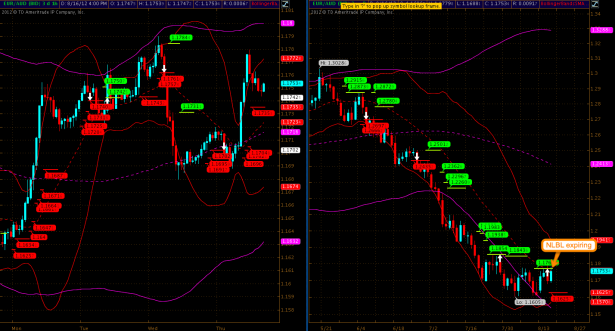 EUR/AUD – also testing its NLBL. Only problem is that it expired today. Officially a breach here would have reduced odds tomorrow but I think it’s permissible if other currency pairs are following suit. For example…. 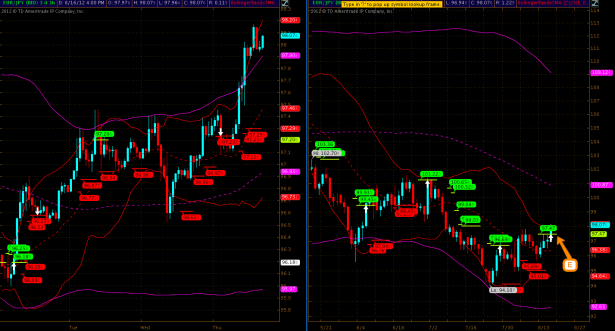 EUR/JPY – already punched through its NLBL and if you’re long here expect a retest as pretty much everything has been testing our patience lately. But yes – officially we are long here and your stop is below that Net-Line. 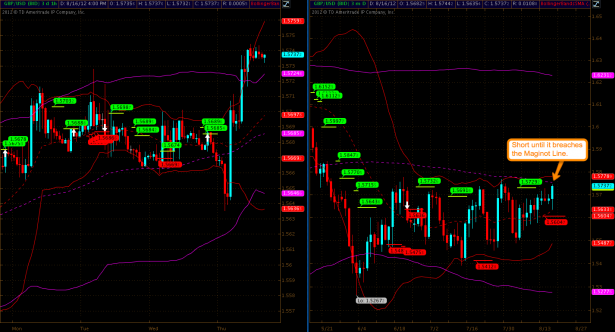 Cable – what a sweet setup! And I can’t believe I’m giving it away for free – must be a side effect of that cortison they injected into my left arm this evening. Great short as every Maginot Line test has failed recently. And of course we would be long on a breach. Watch this one closely – if it takes off to the long side I expect it to gain traction.

Okay guys – this should keep you busy tomorrow morning. I’m going to turn in and catch some zeezz.

P.S.: Believe it or not my laptop just died while finishing this post – NOT my lucky day today! 😉