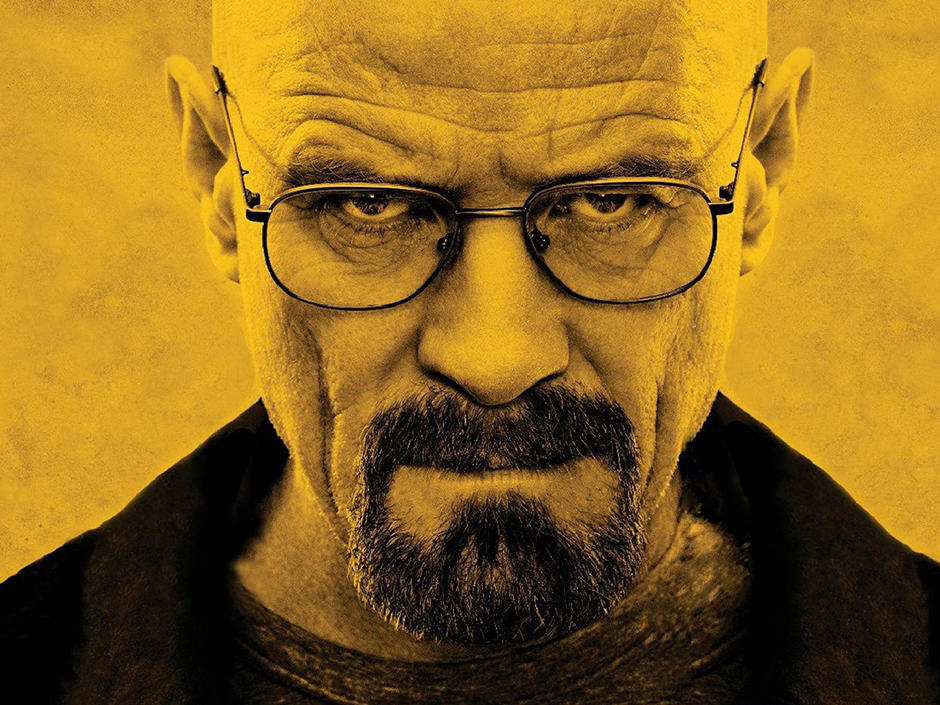 If I were to use a reference in popular culture to describe what’s currently unfolding in equities then I’d probably point at Walter White walking into the local drug kingpin’s lair with a bag of fulminated mercury in his pocket [episode 1-6]. Up until this point he’s merely been toying with evil, skated around embracing it, conveniently rationalizing his growing series of illegal activities and the drama he is about to unleash.

And right here, in Tuco’s headquarters clearly situated on the wrong side of town, comes the moment when he finally crosses the line. This is where Walter stares straight into the face of evil and realizes that he likes what he sees. This is where Walter White, as we and his family knew him, ceases to exist. He has officially transformed into his alter ego he calls ‘Heisenberg’ and from this moment on there is no turning back. 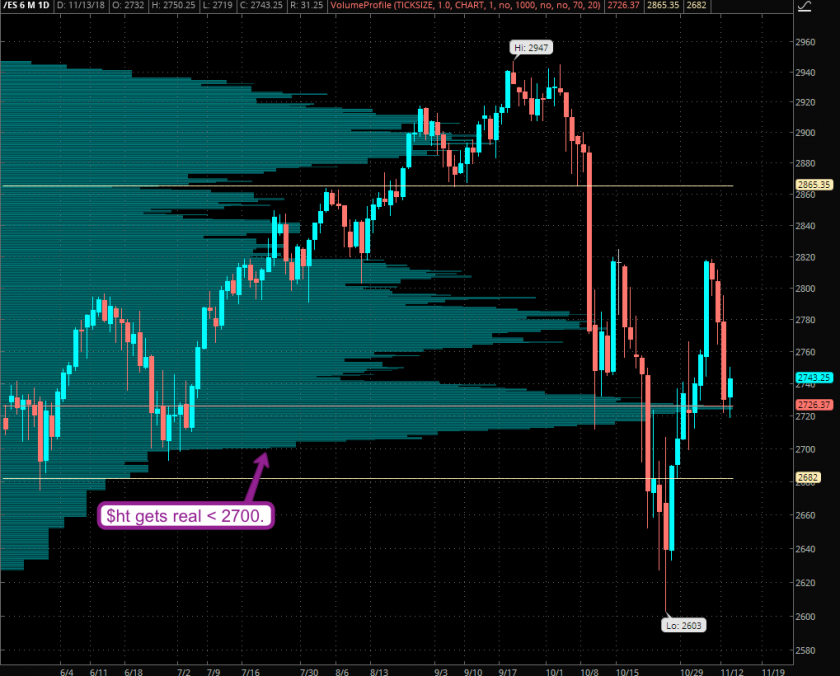 The Orange Pig scenario has officially played out and we are now at the threshold of something a lot more sinister. Should equities end up crossing the line at around 2700 then I am afraid that we are looking at a very unpleasant resolution of the 2018 trading year.

As you know I am not one to count waves (anymore) but IMNSHO the current formation has only two plausible resolutions. Either the bears once again are taken the woodshed or the bulls are about to receive a reminder of what it means to keep iceskating near the edge of an abyss.

Once we breach below 2700 and especially if we end up dropping < 2600 there will be no happy endings for anyone involved. It’s going to be swift, relentless, and violent – and it will reverse several years worth of growth in the financial markets. So this is serious folks and once that Rubicon has been crossed there is no turning back. 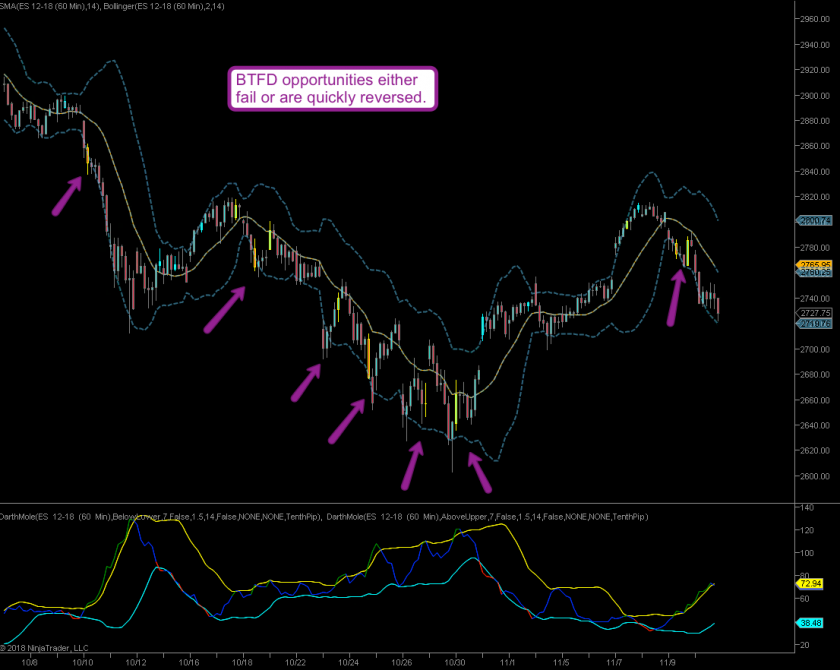 And I’m not saying this lightly or without a shred of evidence. All one has to do is to simply look at the price action and especially how risk continues to be priced. Here’s a panel showing you realized volatility continuing to signal long opportunities which then either fail or are quickly reversed. If you remember previous examples I’ve posted here, this is not a common phenomenon and does not happen (often) during healthy bull markets. 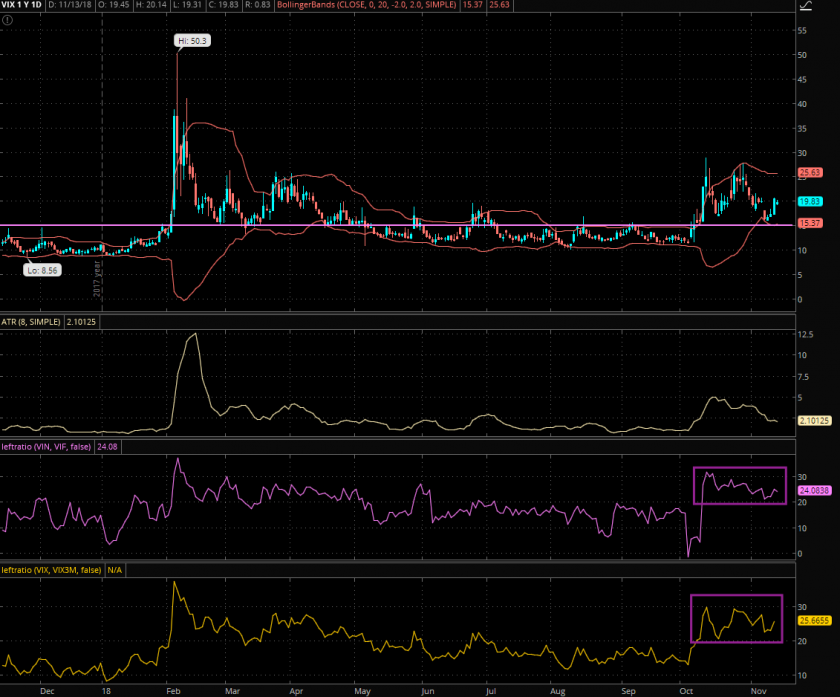 Here’s implied volatility and to be honest what I’m seeing is starting to be frightening. I have not seen the VIF so inflated against the VIF for such extended amount of time. The VIX isn’t really showing this yet but an explosion higher from here is expected to easily exceed the 30 mark. 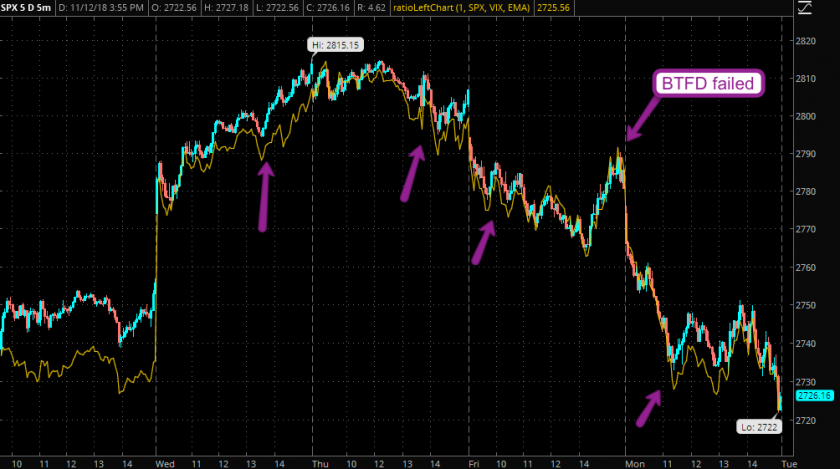 Here’s the SPX vs. the SPX:VIX ratio. As you can see even on the way up the ratio has been lagging which is fine for a day or two but not a whole week. There was one attempt to BTFD (which we did successfully btw) but it was swiftly reversed.

I could go on but I have been posting a ton of technical evidence in my momo updates over most of this year. Every single time the bulls managed to somehow evade having to pay the piper. But I fear that we are reaching the end of the line here where too much technical damage has accumulated and accounts need to finally be settled. 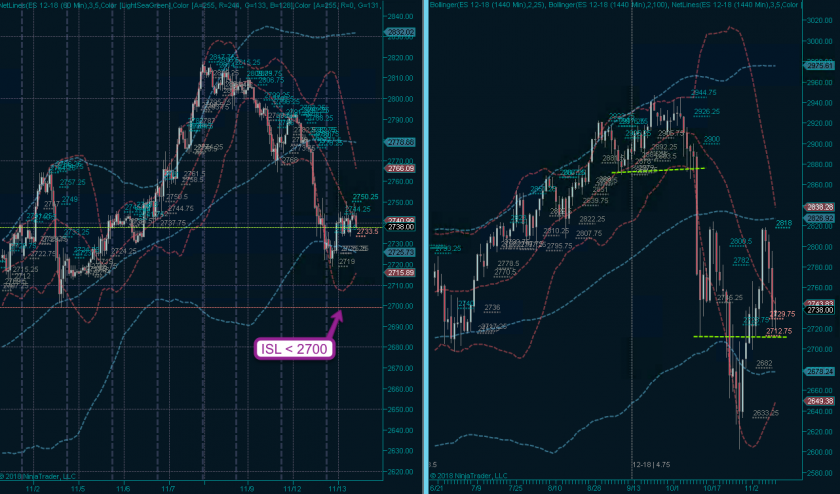 So why the hell am I taking out a long position here? Two reasons: First, the charts above are scary enough causing me to recoil just thinking about being long and I usually trade against my emotions for a reason. Second, this most likely represents the final battle for the bulls. If they lose the spike low on the daily panel it’s the final curtain call for a nine year secular bull market in equities (I’m not counting this year).

The stakes here are YUGE and I would be amiss to not take a shot at that final lottery long ticket. The odds here are currently 50/50 but begin to deteriorate quickly with every handle we drop lower. So if you decide to follow me into this abyss then I strongly urge you to use a small position size and keep your stop < 2700 at minimum.

IF stopped out, and again the odds for that are at least 50% I plan on waiting for a small retest higher before taking out a short position with a stop, well – we shall see. If you are more bearish than me right here right now then this is not a bad spot to have been long since last week 😉

There is going to a lot of pain with this one. A lot of people are going to be unemployed with house prices tumbling. California is really going to get nailed with home prices. RW on target with that. As with usual with recessions the West will be hit harder than the East and South Seattle – Portland – San Francisco and L.A are really going to feel pain. Not going to be a laughing matter at all. The nation will survive and be better because of it. The younger generation is going to learn some very valuable lessons.

So… I guess perhaps good news then after all?