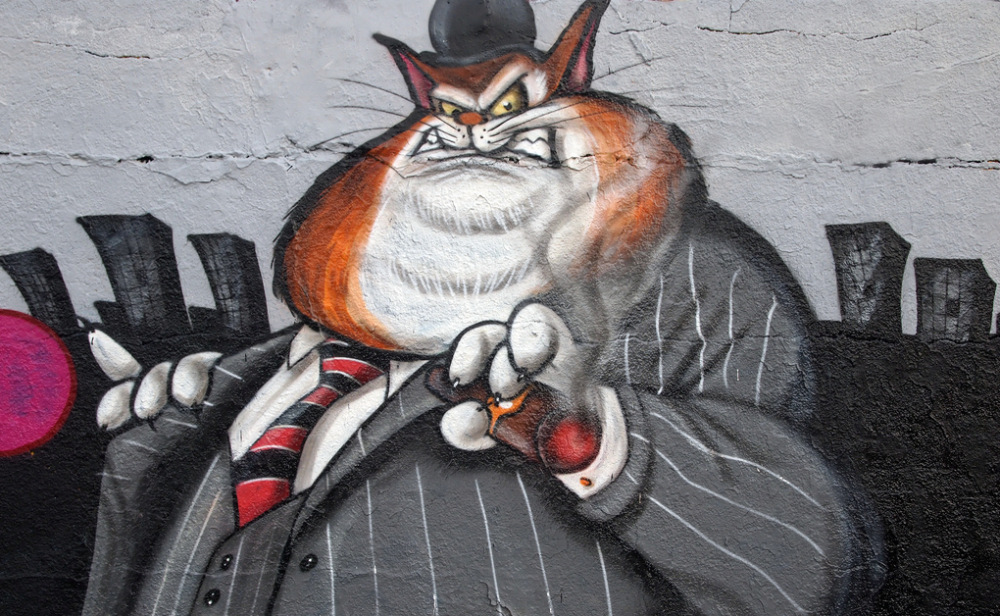 At long last British citizens are getting their opportunity to kick the EU to the curb and once again enjoy national sovereignty without any interference from unelected fat cat bureaucrats in Brussels. Or so the story goes if you’ve bothered to listen to the all recent hype in the news. Although I personally would love to see nothing less but a crushing defeat of the EU romanticists we must come to terms with the fact that the Brexit vote has a snowball’s chance in hell of succeeding. For when it comes to pitting the unwashed masses against an organized cabal of deeply entrenched Eurocrats this speculator will have to bet on the guys in the fancy suits every single time. 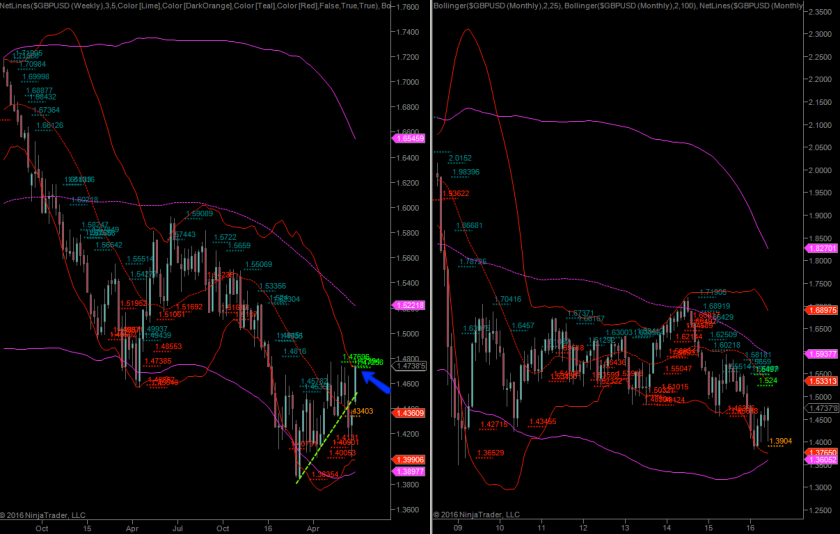 But don’t take my word for it – let’s just look at the numbers, shall we? Over the past two years the British pound has dropped almost continuously, the one exception being an obligatory house cleaning bounce about a year ago. Now after the 1.38 mark earlier this year it has been recovering a bit and is currently pushing against a stack of weekly Net-Line Buy Levels and the upper 25-week BB. A breach beyond that would probably trigger a pretty nasty short squeeze, which would easily get us to 1.5 or higher. 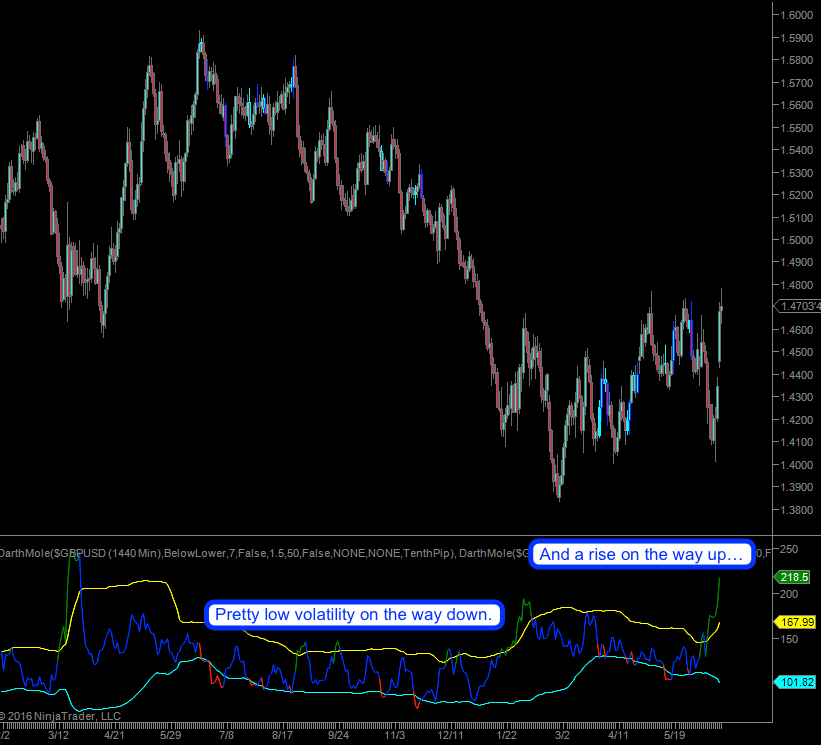 Now the argument could be made that this is a fading move and that anyone long here is going to get smashed into smithereens. Sure, that is a definite possibility we need to entertain. But let’s look at realized volatility (RV) for a moment. Because when we want to get a sense of what the market is really thinking the RV signal can often provide us with valuable clues.

And what do we have here? I see pretty low volatility on the way down. The sell off looks pretty orderly and I don’t sense any panic selling. A steady drip drip drip of red candles, only occasionally interrupted by a quick dip to the upside. Which is actually where we see volatility kick up. Interesting…

Now in the past few months we’re seeing a floor pattern and after scaring the children cable is now pushing higher just a few days before the big vote. So the million dollar question here is this: Why is volatility favoring the buy side? I don’t buy the idea that there is some kind of panic buyer attempting to support the British pound. I mean is anyone really worried about a weak currency these days?

Which is why I had an extra laugh when I came across this little jewel in which the grandmaster of speculation warns the potential of a 20% drop in the British Pound should the Brexit referendum actually wind up passing. As if the old buzzard would care either way – he’d be first in line to short the proverbial shit out if it if he really thought that was a possibility. Besides any self respecting central banker would sell his grandmother for a 20% currency drop these days. It’s quite humorous that we, said unwashed masses, are constantly being preached the benefits of a weak currency. Which then, when convenient, suddenly becomes the catalyst for a Sodom and Gomorrah type scenario. I’m sorry – I may have missed the latest memo. Weak currency = good or bad now? 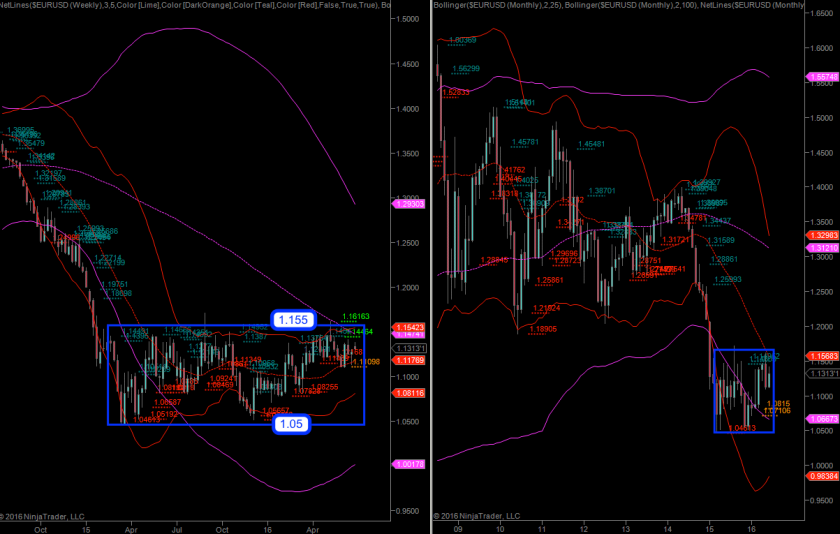 Of course the currency we really care about these days is the Euro. And here we’ve been stuck in a sideways range for the better part of the past 18 months. Now I personally am not complaining and actually plan to make quite a few trips to the ATM before the vote on the 23rd. Because if Brexit fails – which I believe it will – we should expect a pretty significant jump in all EUR quoted pairs as it would be considered a glowing endorsement of over 20 years of ill-fated and unmitigated Euro socialism. Which by the way may actually be a great opportunity for selling the rip but let’s not get ahead of ourselves. 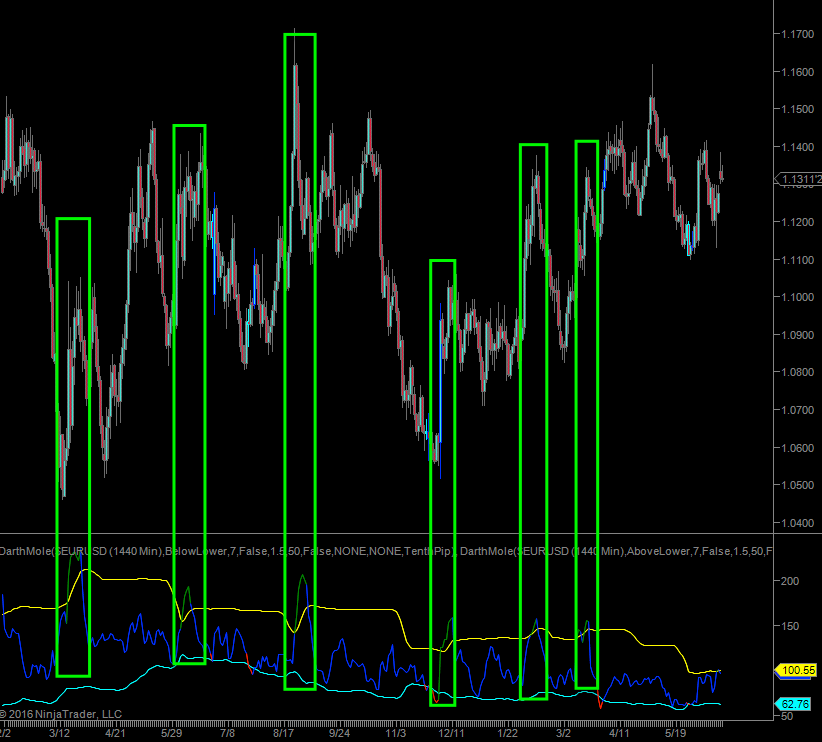 What I need you to pay attention to is the realized volatility on the daily EUR/USD chart. The sideways range is well mirrored here but what stands out are the volatility jumps which happen in pretty regular intervals – about every eight weeks or so. And from what I can gather we are just about to see yet another one (yes, I know – that’s not a big prediction – but I’m just focusing on the chart here).

But what always produces those volatility spikes? Buying frenzies which come out of nowhere and then suddenly stop. After which the EUR is once again left to quietly sell off until Draghi somehow once again utters some kind of cryptic comment which the street interprets as an yet another opportunity to squeeze the bears.

The thing is this – I don’t really sense any fear here. Institutional traders, who certainly are the only ones who can move a big market like this, seem to have been quietly selling whilst buying up the lows, just in order to then sell off again. Rinse, wash, repeat, but without breaking the range between about 1.05 and 1.155. Real fear would be dragging this market lower and thus far I don’t see them sweating.

Now for the record – I’d very much love to be proven wrong on this. But that bottle of champagne most likely will have to keep collecting dust for quite a long while.

FYI – I won’t be doing any trading ahead of the Brexit vote this Thursday. Everything is moving in circles until then and directional setups will have extremely low odds of succeeding. Besides, it’s officially summer now, great excuse to take a day or two off