By The Seat Of Your Pants

There comes a time when you look at a market and you although you cannot really put a finger on it you know that something’s wrong. Now, I’m the first one to caution everyone to keep emotions out of the game.

However, at the same time I do encourage my rats to listen to their intuitions. There is a difference you know – one is driven by what you (think you) KNOW – the other is driven by what you (subconsciously) SENSE. The latter is why fledgling traders often start winning big – the former is why they usually get wiped out within the first year. Most folks also have a strong tendency to suppress subconscious input at their very detriment. And it’s exactly when people think they know what they’re doing (or are smarter than everyone else) when Ms. Market smacks them over the head with a shovel. 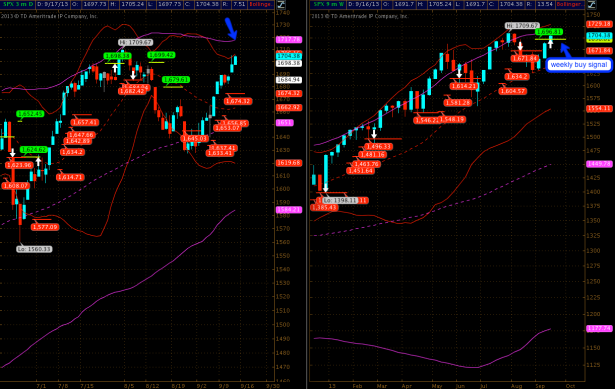 And I’m not saying that because I’m losing – as a matter of fact we’ve done a pretty good job evaluating the tape at every inflection point and we picked the right direction every single time (go back and check my posts). My target area is near ES 1720 and if we close above the weekly NLBL on Friday then that’s pretty much baked in. 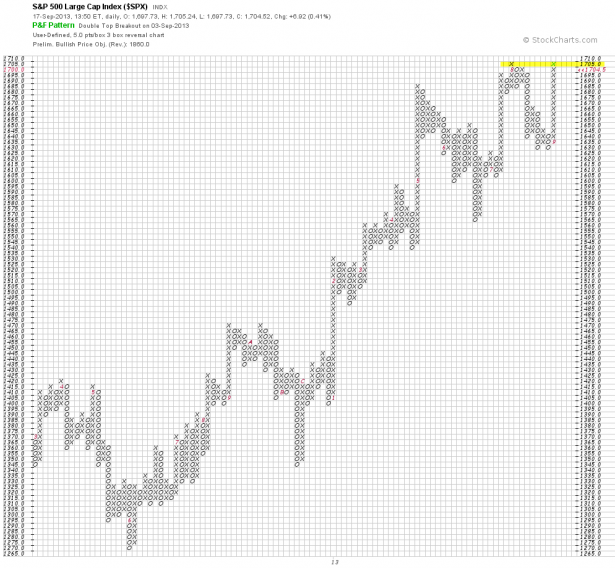 The SPX point and figure chart is about to breach an old high and that’s going to propel the already insane PO even higher. But – I’m not liking it – it feels like we’re flying by the seat of our pants here. Unfortunately I don’t have much to back this up technically – JNK/TLT is pointing up and so are many of my other market measures. 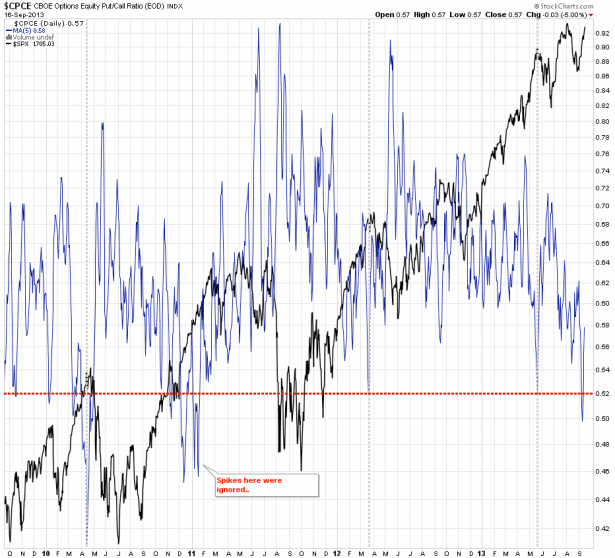 Here’s the CPCE – boy, it’s been a while since I’ve seen so little puts vs. calls. Strangely that last drop lower happened during the recent correction. Usually a touch of 0.5 or below is good for a correction but they have become much more shallow in recent years. 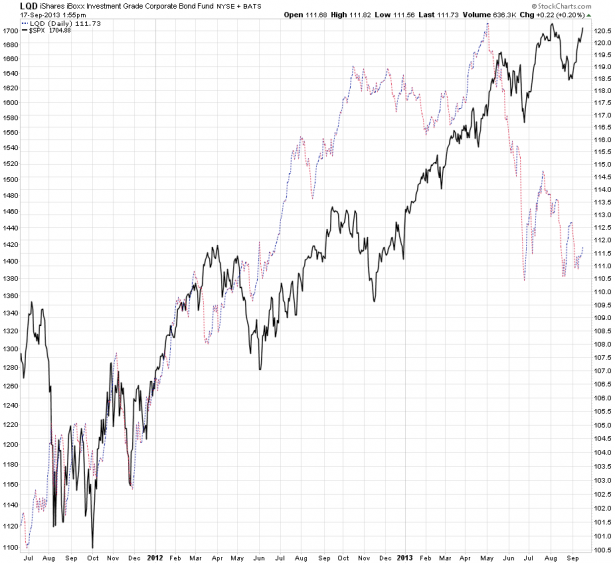 LQD also limping behind – but heck, what do bond traders know, right? 😉 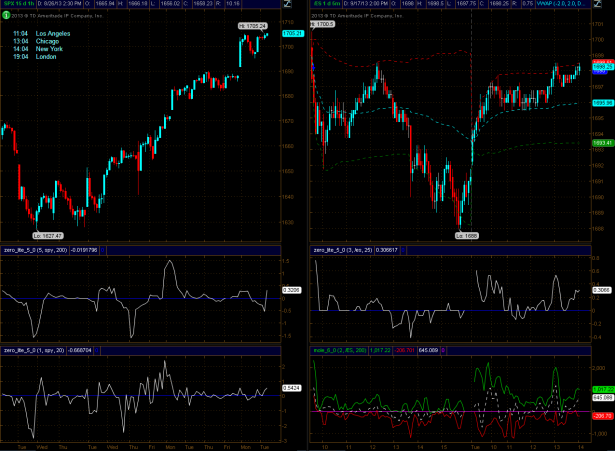 The Zero indicator has been scraping by on the hourly panel (left panel) – I was about to ring the alarm yesterday but today the signal popped back above the mark. I’ve seen that happen before and it can keep bubbling higher on minimal participation for weeks. What we need to see is a blow off top with a clearly divergent signal.

Bottom Line – I’m still long relying on my P&F chart but I don’t like it. Meaning I’m holding small and am focusing on other markets. I don’t have to trade equities after all – much fun to be had elsewhere. Truth be told – some of my best trades have happened in tape that I hated. Perhaps that’s what we’ll get this time around as well. 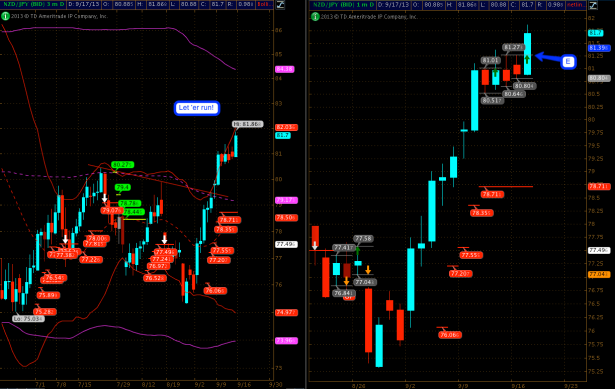 Before we get to the setups a quick update on the NZD/JPY: Double IP entry today and we’re off to the races. Now this is what you do: NOTHING! Get it? Let ‘er ride. I think this one could turn into a runner.

The new blog poll is clear as a vast majority opted in favor of including CrazyIvan.GC. I decided to test it in beta for a week or two and guess what – you are invited! Sign up for FREE right now to receive alerts for both CrazyIvan.GC.480 and CrazyIvan.GC.30. 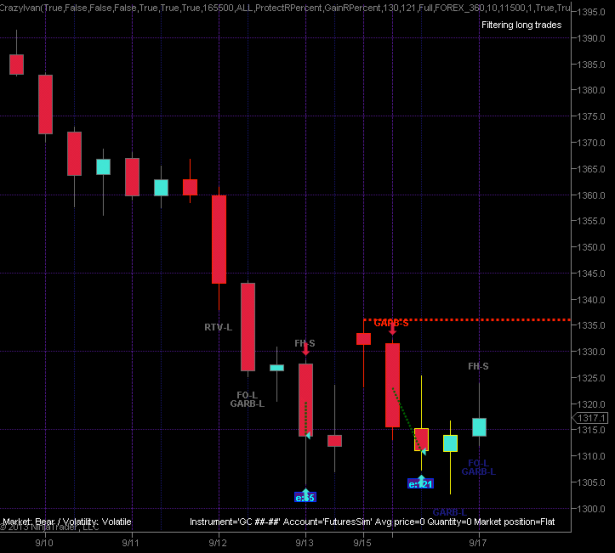 Here’s a snapshot of the 480 in action. Looks like we missed some nice short trades in the past few days. Which raises the odds for the next one being a loser, so let’s watch this one for a few days and to make sure the configuration works like the others.

Scott mentioned something important this morning: Unlike the spoos the principal gold market are the futures (~3% of volume is spot gold) thus the leverage inherent in futures causes similar trendiness to currencies. Which may make it ideal for CrazyIvan – especially the trending 30-min version – and I’m looking forward to kick the tires on this one 🙂

If you are not yet a CrazyIvan sub and have not yet exposed yourself to the tutorial then I strongly recommend you do so after signing up for the beta. Most questions should be addressed there in detail and then some. Here are some of the salient links:

I would also recommend you use a Gmail address and set up the filters as described in the tutorial (also add alerts@evilspeculator.com to your contact list). This way you can even set yourself up for free SMS alerts, which is pretty cool.