No, I’m not talking about the latest iteration of the popular FPS game – although I have to admit that I’m a devoted fan and can’t wait for the release of Black Ops. Rather I got another phone call from Geithner over the weekend – here’s a rough transcript of the conversation:

Geithner: Mole – this is Tim-ay – how’s it hanging?

Geithner: Well, I think I may need your help again – those G20 talks are not going so well.

Mole: What, did Qishan call you ‘Western Devil’ again?

Geithner: No, but he did give me a wedgie during the group photograph. And he keeps bitching about Bernanke destroying the Dollar.

Mole: You got to keep your bulldog in check, Tim-ay – what can I tell ya… he’s out of control.

Geithner: I know, I know – but Ben is trying to go cold turkey now. We had to strap him to a chair to keep him from printing more Dollars. He’s even printing them at home with his Epson – can you believe it?

Geithner: I kid you not! Just last week he was faxing me a bunch of hundred Dollar bills – and insisted that they represented perfectly legal tender.

Mole: You got the draw the line somewhere, Tim-ay!

Geithner: Tell me about it. One of his secret service agents had to use the toilet and guess what he found in the bath room?

Geithner: Worse – he was actually using a stack of real hundred Dollar bills. Anyway, we got him under watch 24×7 now but I need someone to go down to Asia and talk some sense into Qishan. We thought you were the right man for the mission. You’re certainly evil enough.

Mole: You can say that again. Well, I may be able to make the time but I’m not flying cargo this time. You should have seen my suit – it looked like an origami sculpture.

Geithner: That was a mistake – some CIA mixup – sorry. This time I bought you a first class ticket to Seoul – from there you’ll go to Taiwan and then to Shanghai.

Mole: Aight, count me in, Tim-ay – I want the usual fee plus I want you to throw in some hot Asian poon. Remember, you promised me a date with Shu Qi last time.

Geither: I can definitely make that happen. We have a deal – kick some ass down there!

And there you have it – Mole is going to Asia again. Should be even more fun than last time: 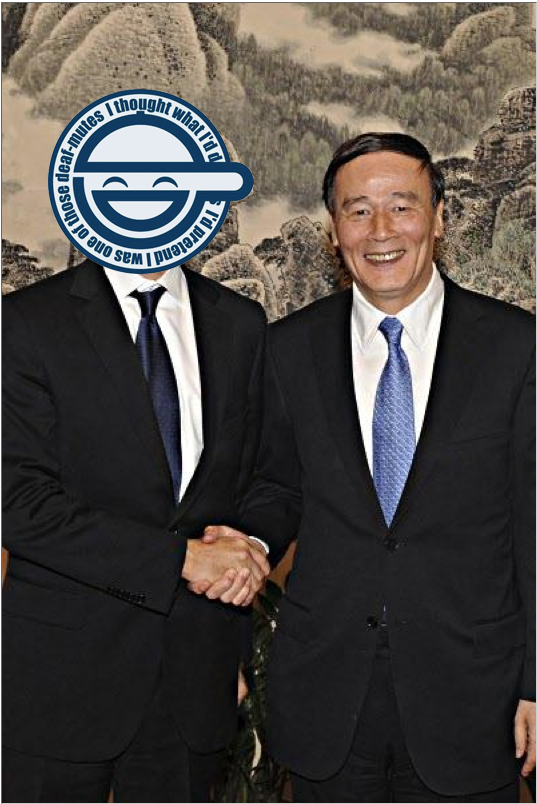 I’m actually looking forward to meeting Qishan again – as he’s twice as smart as Geithner or Bernanke combined. And I find it ironic that it took the Chinese less than two decades to start to run circles around the West when it comes to international finance and monetary strategy. The Chinese are now extremely well positioned to rule the 21st century and thus evil Mole owes it to himself to extend his nefarious operations into Asia. After all: If you can’t beat ’em – join ’em. 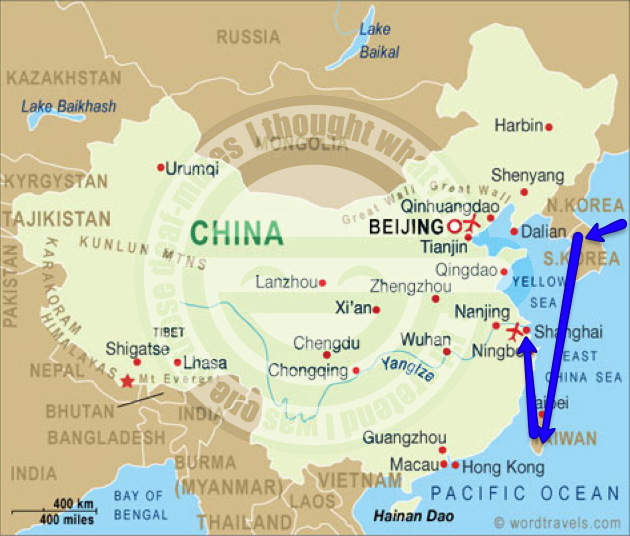 This is the route I’ll be taking. I’m flying out to Seoul this evening and will start busting balls at the G20 meeting, just in time for Obama’s arrival the week after. Later in the week I’m flying to Taiwan and then it’s off to Shanghai to party and seal some deals.

Now, you know the drill – I’ll be sixteen hours ahead and will chime in as often as I can but there may be several days during which I am unable to put up a comment cleaner as I’m pretty sure that Qishan has banned this blog down there. Geronimo and the Zero will be running on its own and if there’s a power melt down (I hope not!) then I have someone standing by to reset it.

I only have time for one chart but quite honestly I don’t have too much to say at this point as I was very clear about my take on this market in the past few weeks:
[amprotect=nonmember] Charts and commentary below for anyone donning a secret decoder ring. The rest of you guys will have to wait until tomorrow – sorry. If you are interested in becoming a Gold member then don’t waste time and sign up here. And if you are a Zero subscriber it includes access to all Gold posts, so you actually get double the bang for your buck.
[/amprotect] [amprotect=1,9,5,2] 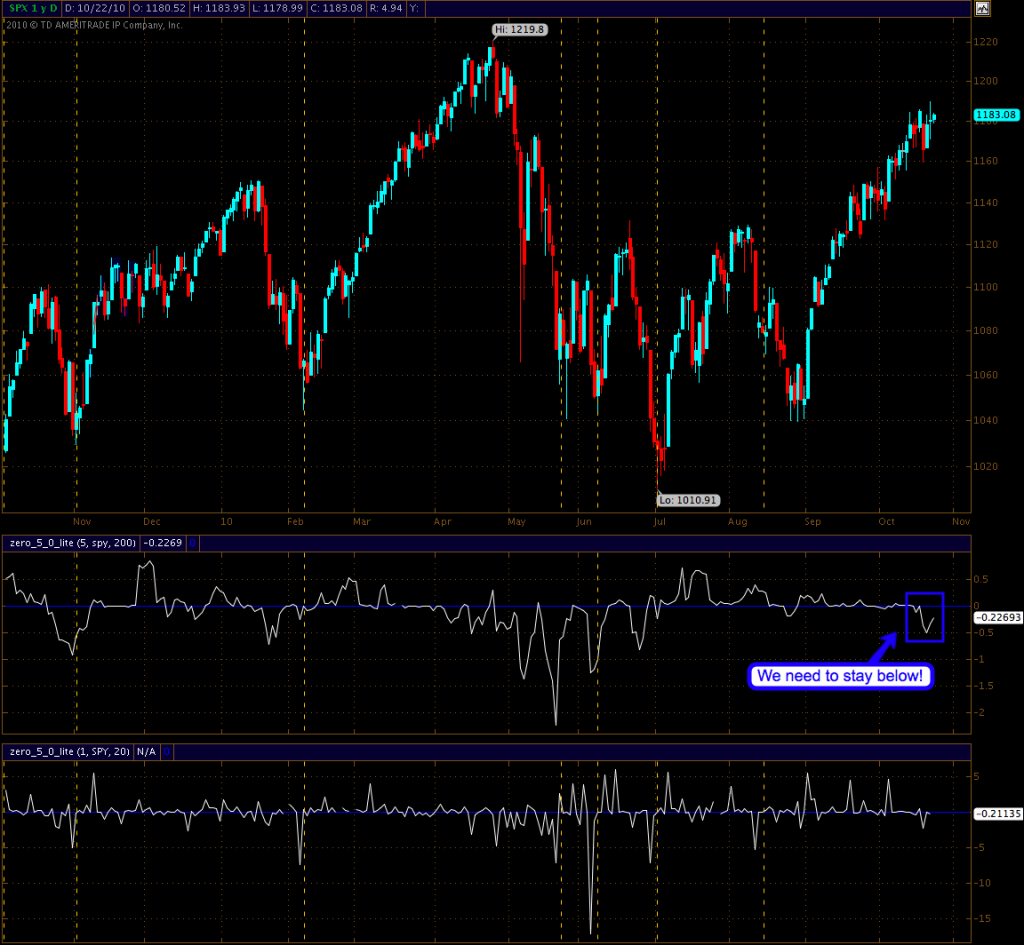 During my absence this is the chart I want you to follow the most. Use the April/May period as an analog – it represents a similar time of irrational bullish exuberance and top painting in equities. In the past few days the smoothed signal finally dropped below the mark and it needs to stay there. A pop above the zero mark most likely means that more significant upside is in the works. We may see some up days accompanied by this signal staying below the mark, which is exactly what happened back in spring. And that’s what we want to see if we should expect a drop sometime in January.

That’s pretty much what I see on the horizon for the next two months – a lot of whipsaw, maybe some higher tape – and hopefully a smoothed daily Zero remaining below the mark, thus leveling the playing field for a more significant retracement earlier in the year. No, I don’t think anything major is going to happen ahead of the midterm election, but I already talked about that in detail.

Now, if you don’t have access to the Zero (shame on you!) then alternatively follow the DXY. It needs to stay above 76.14, otherwise it will trigger a bonafide net-line sell signal and lead us much lower – and thus equities much higher. That’s really how simple it is – a lot is riding on the G20 meeting and at least a temporary reprieve on the destruction of the Dollar. My take is that they’ll string everyone along until after the midterm election, after which the buck may be allowed to soar and equities left to retrace a little – how far isn’t clear yet but with the X-Mas season looming I don’t think we’ll see a consolidated sell off just yet.

That’s it – I still have to pack, thus I must run – see you on the other side (of the Pacific).

P.S.: In case my plane drops into the ocean or the Chinese decide to throw me into some prison work camp rest assured that all arrangements have been made to continue the Zero as well as Geronimo and Evil.Rat. There is life after Mole.