Cashing Out Of Financials 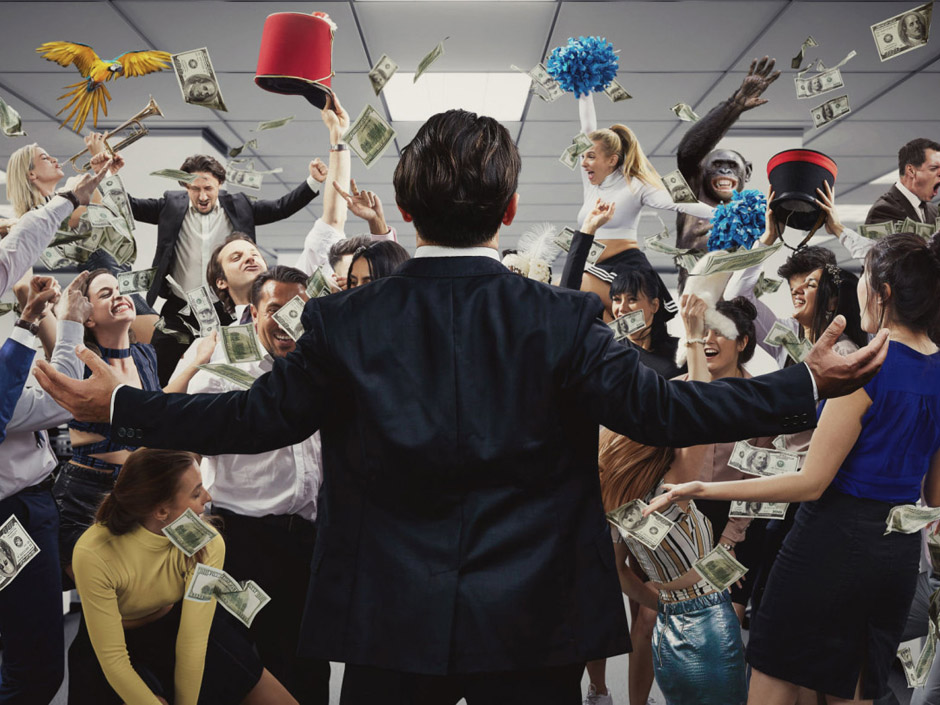 If there is one unrewarding duty I continue to claim my own then it is to caution you against relating your trading activities with your own personal beliefs, may they be ideological, political, spiritual, religious, or otherwise. I am not saying you should abandon them in any way. Quite on the contrary – they may be the ones that keep you sane as a human being, especially in these trying times. Bu if you hazard in participating in the big game you will have to force yourself to draw a clear line between your actions as a trader and any other pursuits or interests in life.

Although I very well should I unfortunately don’t make the rules. I merely work here and so do you by the way. Assuming of course you hold an active trading account. And believe me, this is not just some trite old sermon I picked up in some dusty old trading book. In fact, this old dog has been there and done that – a few times over until he finally smartened up.

Back in 2008 I played King Beartard and eventually had my ass handed to me by SEC chairman Christopher Cox…. when he announced a short sale ban on September 19th of that year. I lost 2/3 of my trading account in that one day and it took me years of hard work to recover from the event. 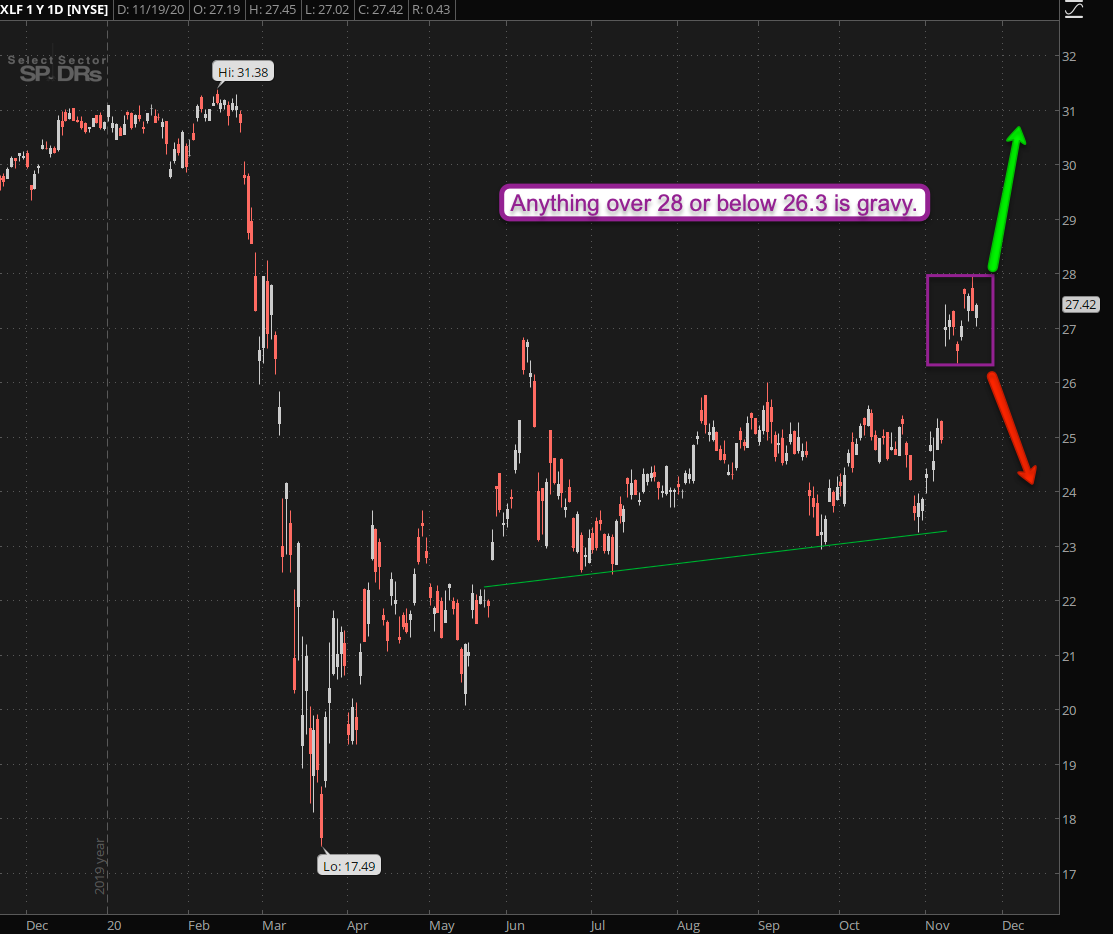 Here is a good example of doing just that. I’m not known to be a raving fan of the financial sector but back in late November I recognized the island formation at the time as a stepping stone to either massive downside or massive upside.

Given what I saw in regards to the price action and the political implications of either a Biden or Trump confirmation the odds strongly supported an outlier move.

Instead of predicting a particular direction I did the next best thing: I offered my subs two clear price inflections points that would enable them to jump on the bus while a few seats were still available (see the chart above from November 20th).

So what happened next? 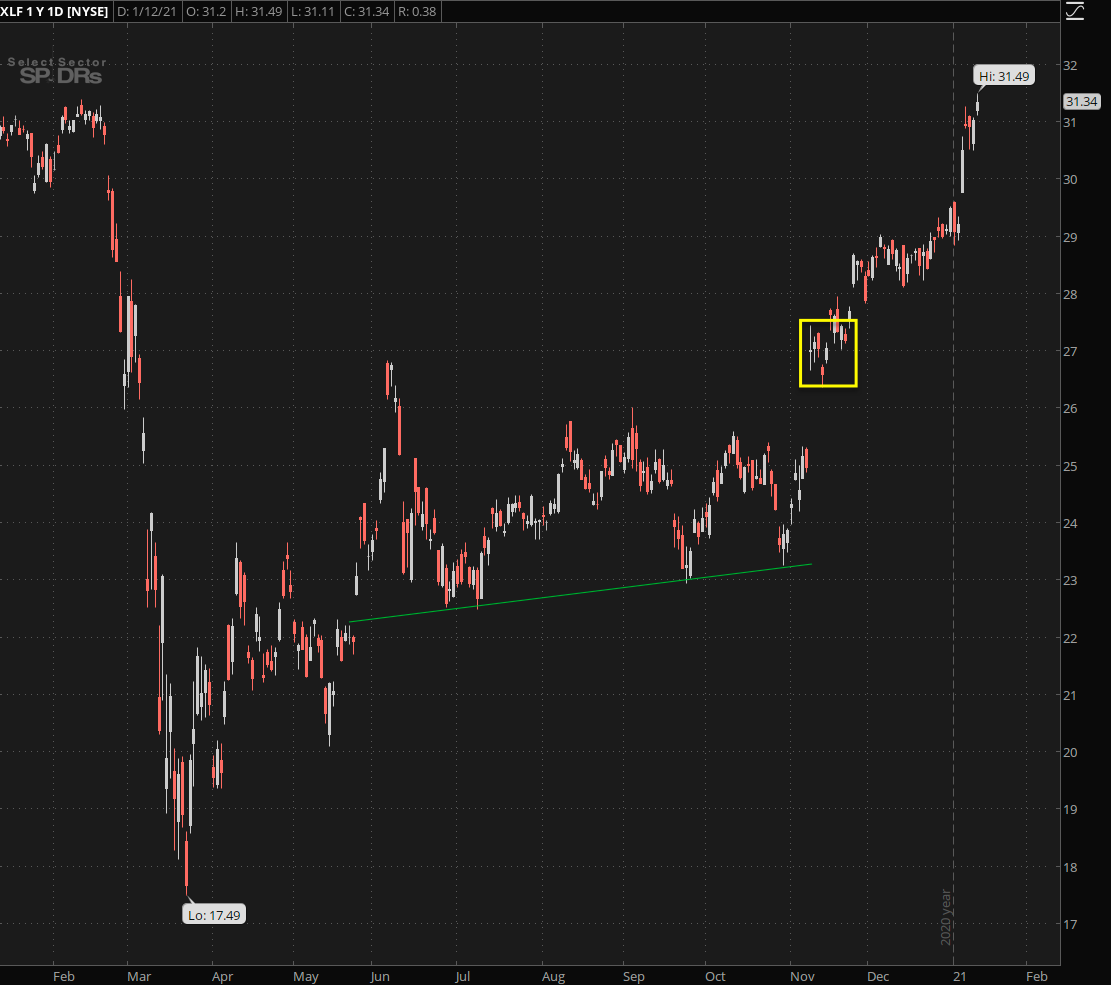 What happened next was a breach of the upper inflection point and face ripping rally that has boosted the XLF by over 16% in less than two months. It’s been printing money non stop with nary a hint of retracement. 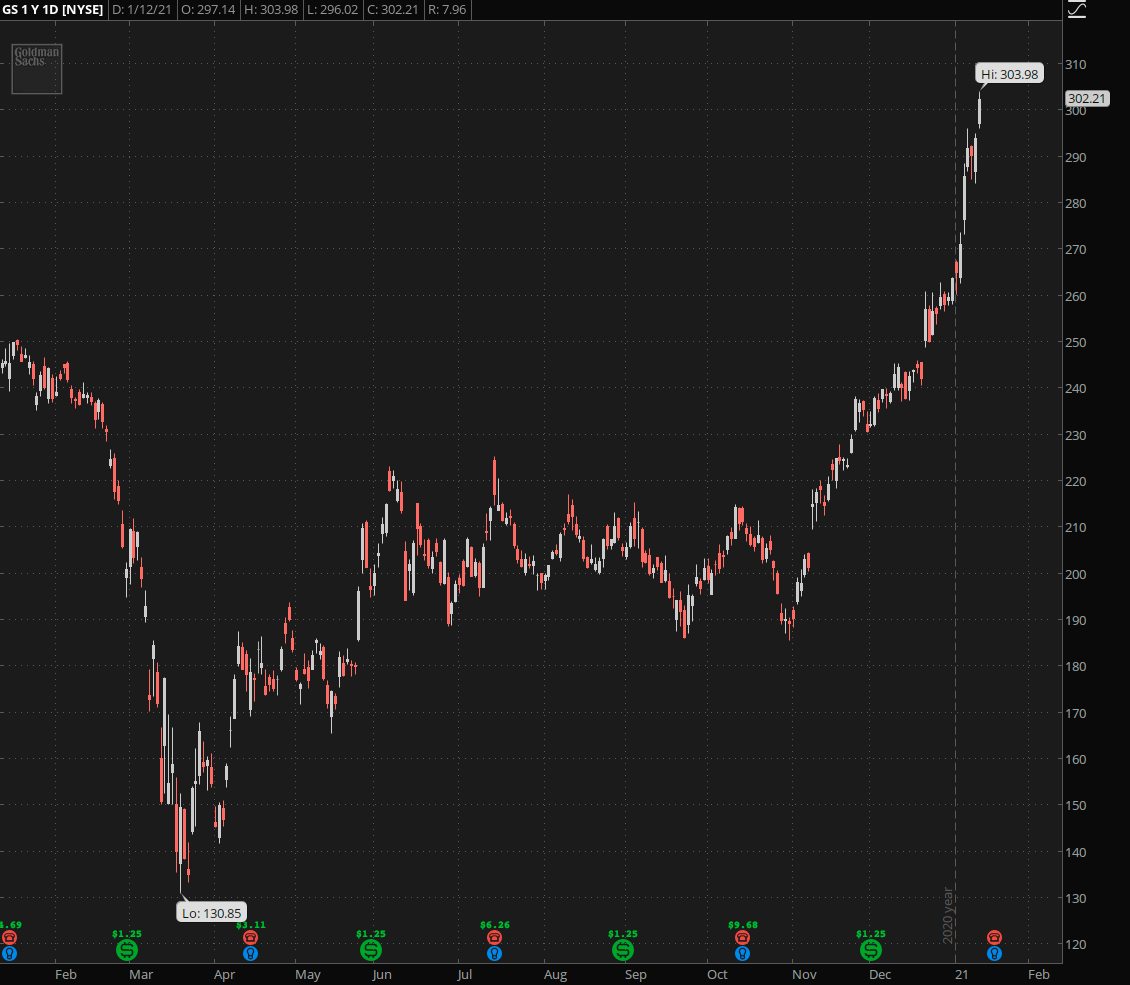 Individual issues have done even better. Here’s GS which has pushed from roughly 220 to 300 – that’s a rip of 36%. They are truly doing God’s work – in my trading account at least. 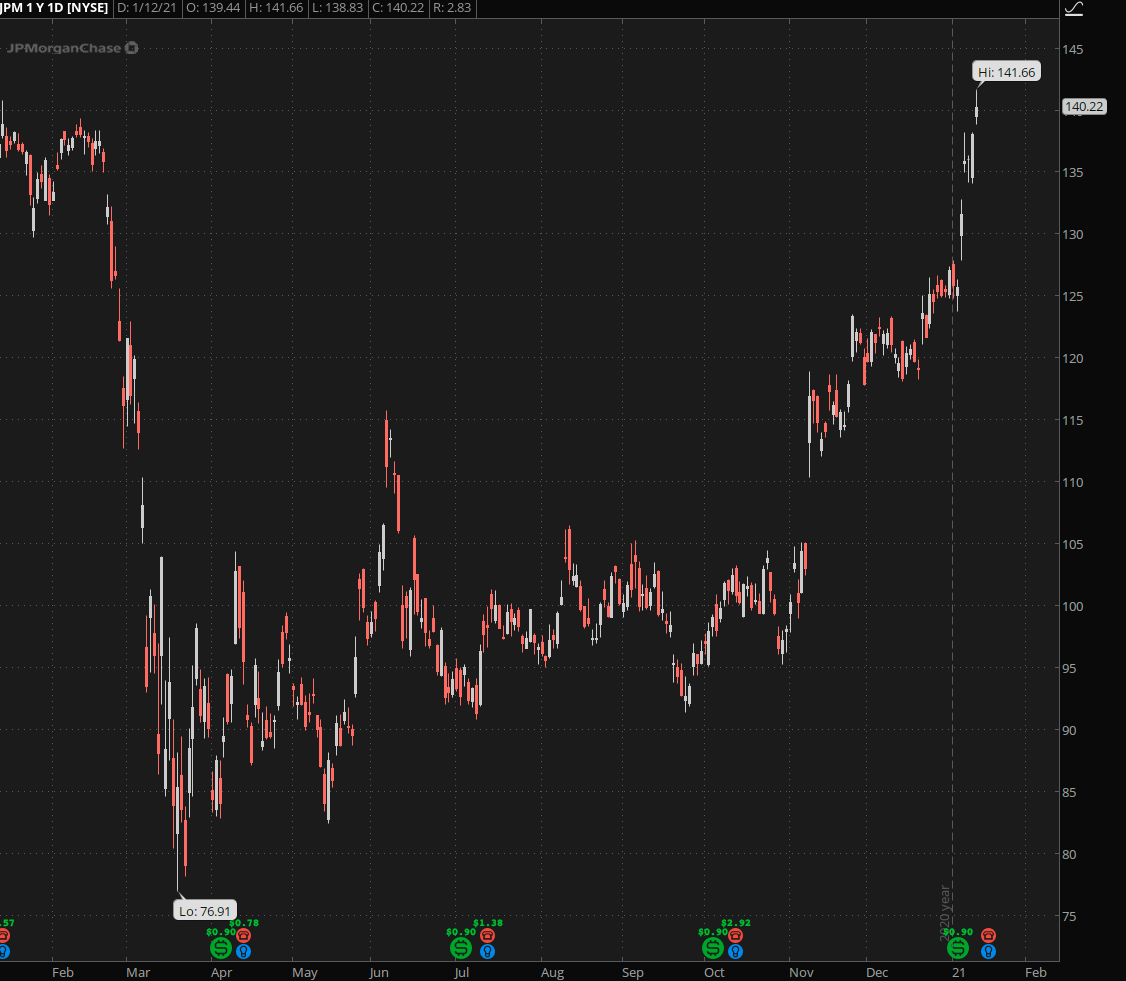 JPM has gone from 120 to 140 and change – not as impressive but still very respectable. 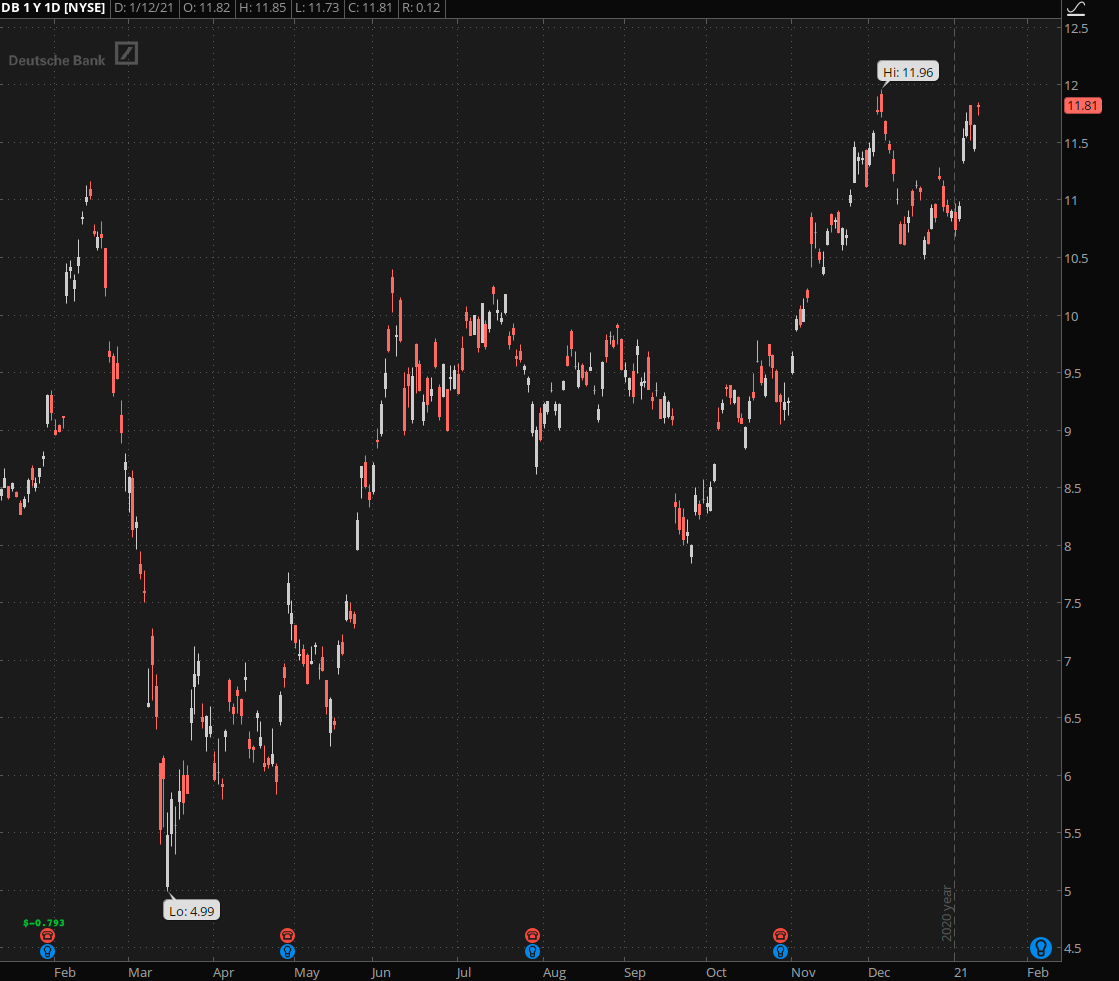 Even DB got a small boost but I would never touch that turd with a ten foot pole. In fact I consider it highly overvalued and if it wasn’t already near single digits I would short the living heck out of it.

Which brings me from the now back to the future. You may also recall that more recently I recommended medium term short positions on XLF or the financial sector as a whole in the form of OTM puts. A bit early on that front but IV was low at the time and so far I have not lost much.

The main reasoning here is that earnings season is coming and we’ve already seen a huge move mainly based on perception and the systematic weakening of the U.S. Dollar. It’s a crapshoot with a low prospect of playing out but if it does it’ll print bucko bucks in a short amount of time.

And that’s what it’s all about. Repeatedly taking calculated risks risking small amounts of your trading capital. It’s boring – it’s not something you read about on social media or in the financial MSM. But it’s what works and it has the capacity of producing consistent returns on a long term basis.

Everything else is nothing but noise and lucky one-timers.