So the good news of the day for anyone holding Dollar assets or paying one’s bills in greenbacks is that ole’ bucky somehow managed to make its way to the 80 mark: 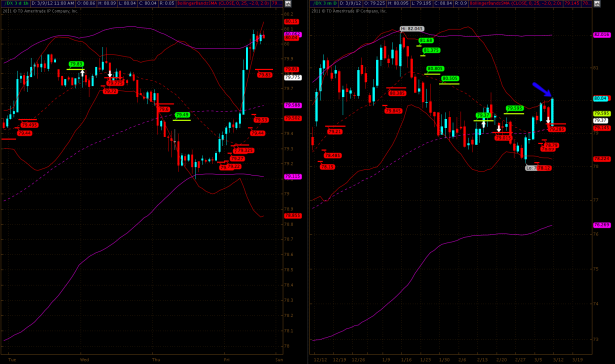 This is a very positive development and what happens right here at the upper 25-day BB will determine if we have a shot at pushing toward 82. And that would do wonders for my exchange rates this spring/summer. 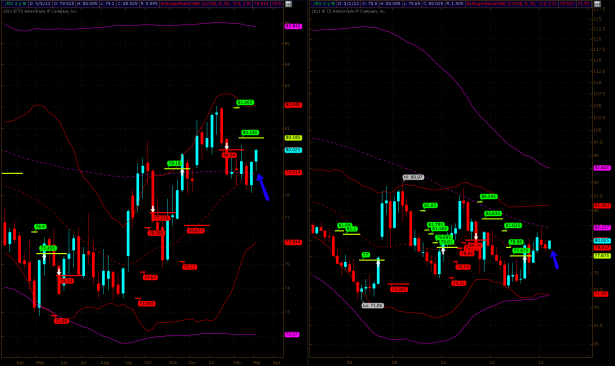 The really interesting chart however is the long term view. On the weekly panel we see that the 100-week SMA near 79.0 was successfully defended. Had that one given any prospects for a Dollar recovery would be rather dim at this point and we would have to deal with resistance looming above. Less obvious however is the support of the 25-month SMA (shown on the panel on the right), which also has been holding up. All that is good news for the Dollar – at least until Bernanke goes to Washington to ask for a new bag of tricks. Hey, maybe FGTH should make a song about that. 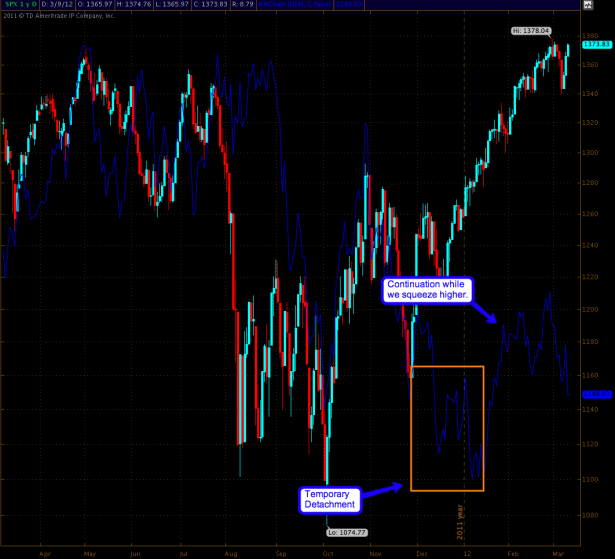 Now I know what you may be thinking: Equities will invariably be reigned in and a major correction should be procedural as the greenback continues to rise. Well, maybe but not necessarily so – unfortunately the game is not that straightforward. First you all know that I never rely on correlations when it comes to structuring my trades in the first place – they usually work fine until the very moment you make them part of your trades.

The chart above shows us the UDN – an inverse Dollar ETF that should move in line with equities. And as you can see we do occasionally have periods of detachment during which equities push higher while the Dollar is on the rise as well. And when the Dollar finally hits resistance (and UDN support) we may actually have the potential for equities to shift into third gear. Meaning – periods of softening correlations actually help equity bulls to really stick it to the bears as soon as the Dollar turns.

So in very simple terms: Whenever you see equities AND ole’ bucky push in the same direction (and in particular if that direction is to the upside) don’t make the mistake of immediately reaching for your DOW 5000 hats. Volar has made a great case regarding the ridiculous sentiment figures we continue to endure. But let me remind you that the big bad bears just had a PERFECT opportunity to take the tape lower by at least 100 SPX points but gave up after just one major sell off day. THAT is one key fact you should keep reminding yourself of before considering more than a 1 or 2 day short trade on the equities side.

So, are the bears done and out completely? Maybe not just yet – here’s the chart you should be watching over the weekend: 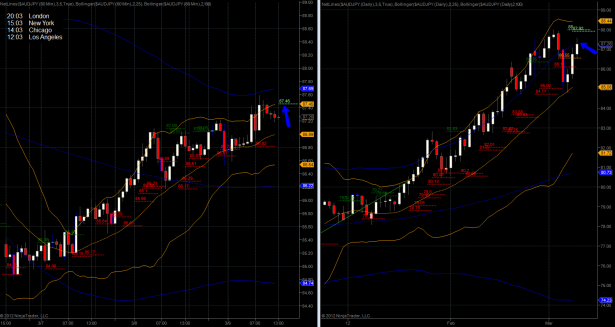 AUD/JPY – no big surprise to you subs, I know. But trading does not have to be complicated to be successful, which apparently is a major reason why many retail rats wind up washing out. Complexity is not necessarily a representation of truth or wisdom, right? E = mc2 – enough said.

Anyway, the AUD/JPY pushed toward the upper 100-day SMA and then recoiled a little. I would be watching that and the 86.55 NLSL which should be good for another session or so. Up above we have two stacked NLSLs – and of course if push above today’s highs over the weekend then odds are we are going to pay them a visit. Take note if the AUD/JPY drops below 87.0 and there’s not much participation Sunday night. A breach of 86.55 would be an early sign that we may correct a bit more after shaking out a ton of feeble minded perma-bears. Hey, don’t blame the player – blame the game! 😉