Since it’s summer and most of you rats fortunately have better things to do than to read boring trading blogs on your Sunday off I’ll be extremely brief today:

Bottom line: The trend is down – but most likely not before a scary head fake to sweep some bears. 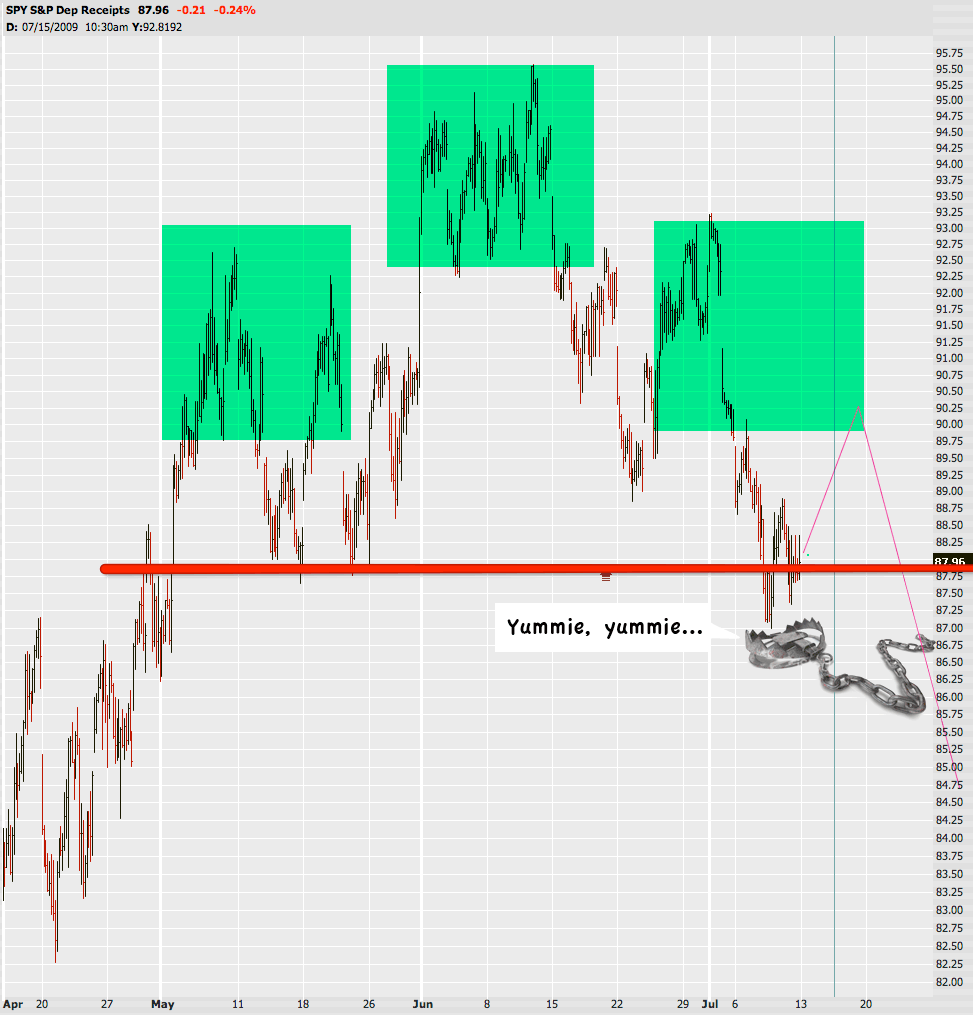 Exhibit A: This is what everyone is talking about right now – if you are a trader that is. I’ve heard so much about the developing head and shoulders formation on the SPX that CNBC is starting to sound like a shampoo commercial. If it tingles – it means it’s working!!! 🙂

For you noobs or TA impaired – this is how these things usually play out on various time intervals (days, weeks, months):

For a much more detailed resource on the head & shoulder tops pattern (and many others) point your browser here. This is a great site to learn basic and advanced charting and candle patterns – you even get historic performance statistics and some of them might surprise you. Suffice to say however that an H&S top is considered one of the more reliable technical patterns but with so many things in life, the devil lies in the details.

So, you probably have guessed where I’m going with this by now. And the best example for what I think might happen next week is actually right on the H&S top example used on thepatternsite.com: 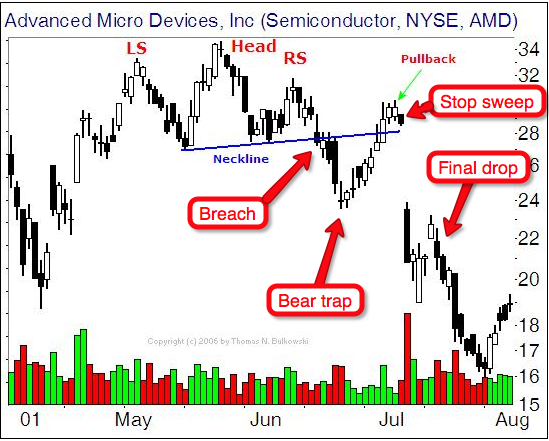 Seems that a neckline breach followed by a head fake is not all that uncommon, is it now? 😉

But the plot thickens: Fujisan posted a really nice screen grab of the SPY option chain – if you missed her post, go back and read it top to bottom – it’s a really good one.

As you can see, the 88P and 90P have the most o.i. at this point – and 5 days before option expiration we should take note of that.

In other words, by the time the average person recognizes something, it’s too late to benefit by the knowledge. There’s another expression which pretty much points in the same direction:

“What everyone knows, is not worth knowing”.

So, please excuse my overuse of colorful aphorisms – but, as a bona fide pain in the ass, certified megalomaniac, and genetically enhanced contrarian I can’t help but suspect that the big drop will only happen once a large portion of the hobby bears have been shaken out: 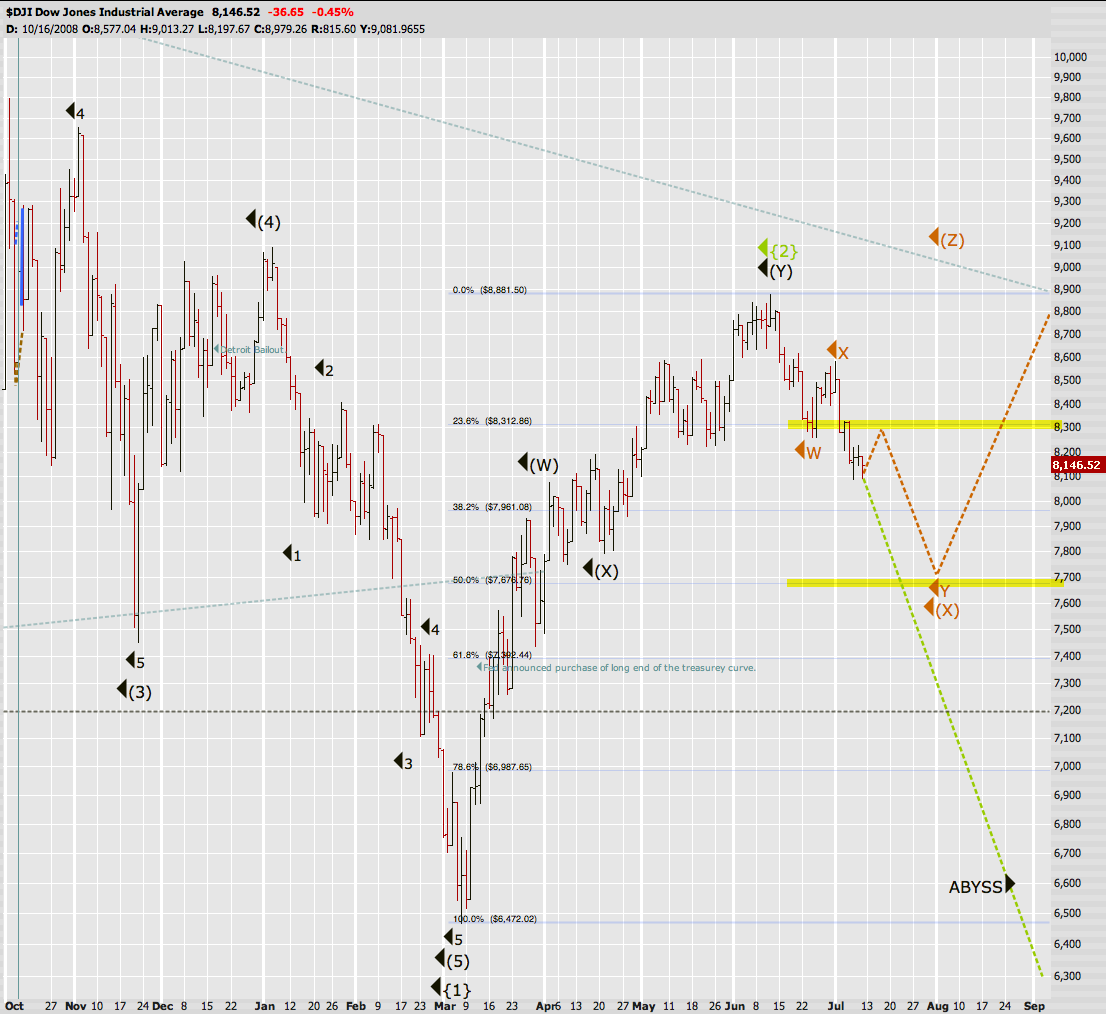 So, it’s fair to say that I am was wearing my orange colored glasses when painting this chart. Yes, green is not impossible and I’d actually give it 35%, but my expectation is that we’ll probalby see 8300 before we see 7,700 on the Dow. 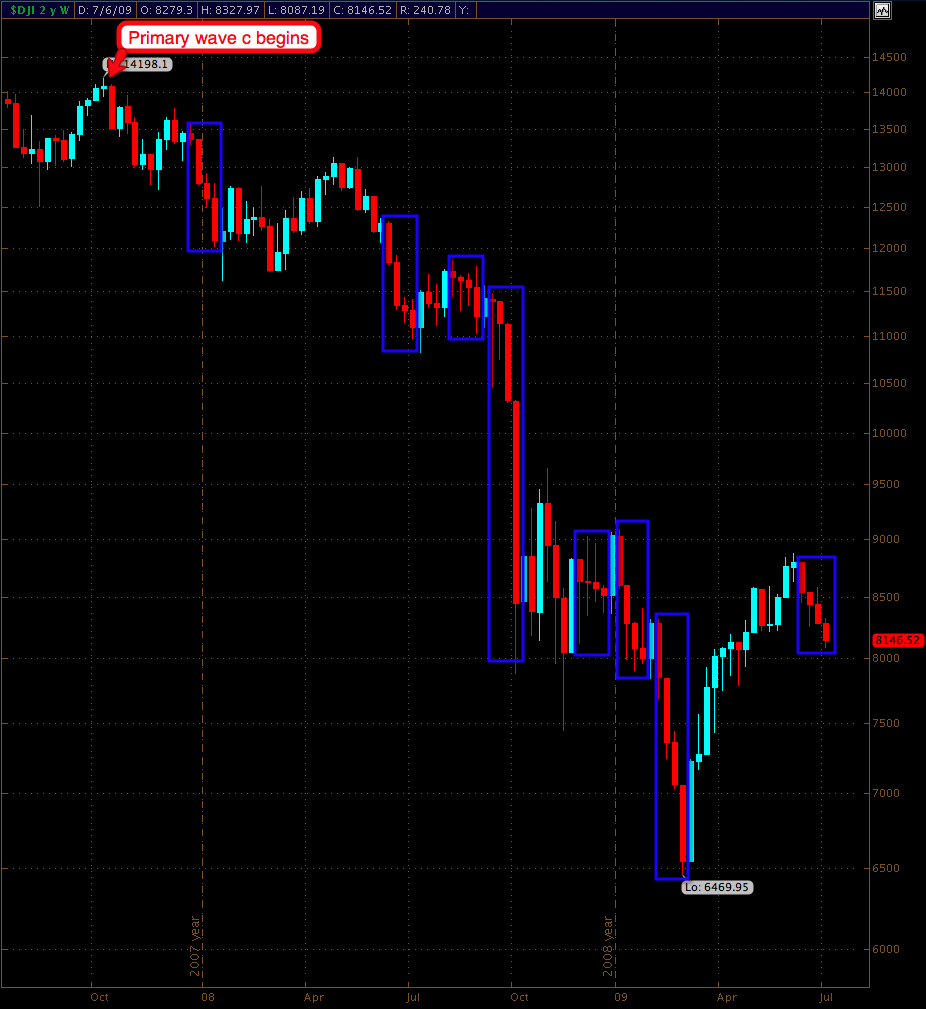 Adding a bit more fuel to my argument is that we now finished a fourth week to the downside on the Dow and that is the maximum since the start of Primary wave c. So, chances are we are going to finish higher next week. If we don’t then it might give credence to the notion that we are in Primary wave {3} – but it’s a bit early to even think of that. And right now it doesn’t really matter – we are early in this down trend and even if it turns out to be the beginning of the next Primary wave we’ll get another opportunity to load up. 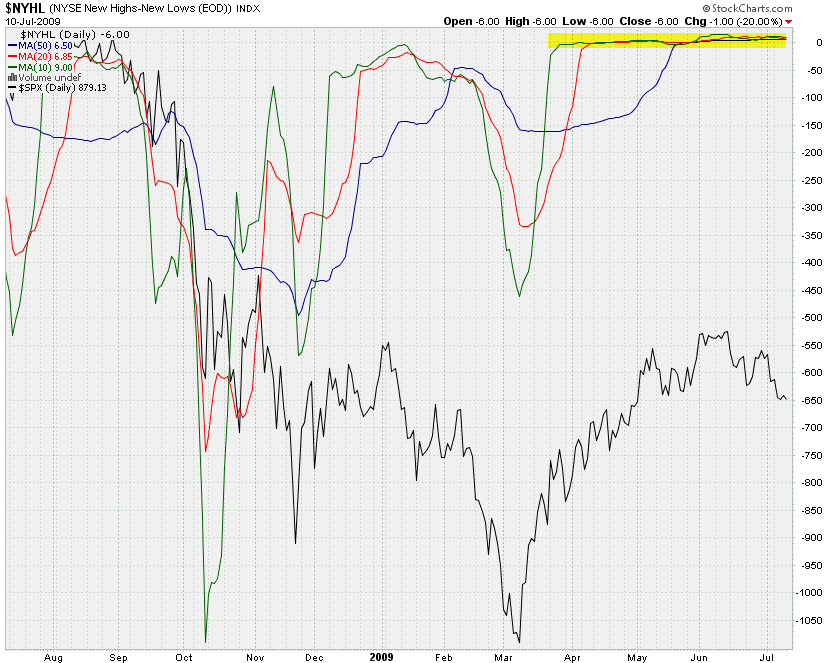 I’m not going to cover my usual momentum/trend indicators but didn’t want you to miss this money shot of the NYSE New Highs New Lows Index. Quite frankly, this thing is starting to look spooky – I have never ever seen anything like it. We are completely flat and converged on three different moving averages – the zero mark seems to be the roof and we are not dropping below it. Frankly, I have no idea how to interpret this – there are obviously two perspectives on this as we could paint higher or lower readings, depending on what’ll happen next. But right now we are in some strange limbo equilibrium zone – and to us traders it sure has felt that way in the past few weeks. 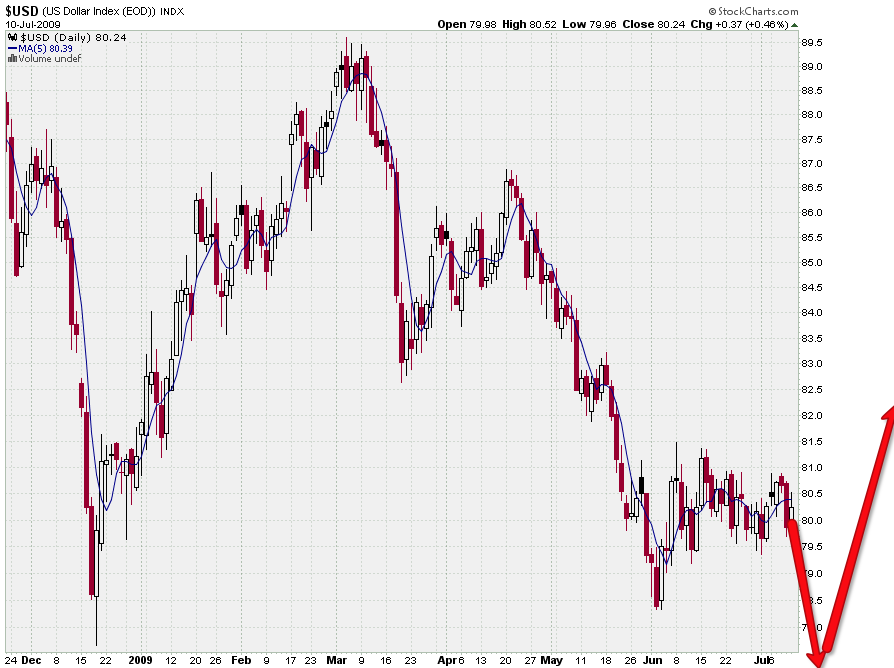 My expectation of the Dollar’s short term direction would play into the Orange scenario in equities. Again, it’s not impossible that this triangle breaks to the upside but the wave form at this stage would be ‘cleaner’ if we completed a 5th wave to the downside. Triangles very rarely form as 1st waves and thus probabilities are that we see 76 before we see 82 or higher.

We are again heading into OPX week and if you think last week was bad then you better suit up in your bulletproof Kevlar vest, at least during trading hours. The gyrations we had to endure last week are a clear sign that institutional traders suffer from advanced rabies infected brain damage and thus will be at their worst behavior. 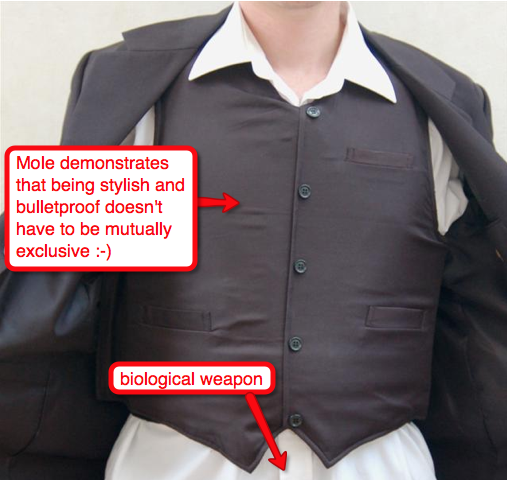 Never leave home without it – hehe 🙂