Comfort, stability and consistency are highly regarded virtues when it comes to investing – maybe not so much for stone called stainless steel rats but we are but a small minority. When it comes trading comfort in particular is nothing but a silent killer – as soon as you think you have found the key to banking profits Miss Market will quickly step in and change the locks on you – sometimes in one single day. For she is a cruel mistress and will not hesitate to prey on us at any moment we show weakness and in particular complacency – and that applies to bulls and bears alike. Case in point – May 6th 2010 – a.k.a. Black Thursday.

As traders we have to accomplish an almost impossible feat in controlling our emotions. One one hand we have to be paranoid and refuse to settle into a comfort zone – on the other we have to stay cool as a clam when the proverbial excrement hits the rotating fan blades, or if you find yourself on the wrong end of a long and fast candle. It takes a strange persona to pull that one off. Of course it helps to stay cool when preparing oneself mentally ahead of anticipated turmoil, which is what we are trying to do here. Problem is that turmoil rarely sticks to any schedule and is notoriously late. Crash insurance through placing far OTM stops is obviously not the solution – despite being consistently advertised in trading manuals. Case in point – May 6th 2010 – a.k.a. The Big Stop Run Of 2010.

Bottom line is: Everyone, even the bears, were stunned last Thursday. Tim Knight called me shortly after the low tick and it was not to cheer and congratulate – rather it was to find out if I had heard of anything catastrophic going down. That’s the problem with being a bear – once you’re proven right it’s actually not that much fun outside banking coin (assuming you were positioned). You can’t really walk into a bar and tell everyone you made a bundle at their combined misfortune. Most likely you’ll get your ass kicked. No, the babes will not find you irresistible and Mr. Buzzkill does not get invited to many parties. Which is why you keep your damn mouth shut and only allow yourself a little smirk while you transfer some trading profits into your bank account.

The good news is that last week’s move brought us some clarity and the probability of a protracted correction (a.k.a. Primary wave {3}) has now increased markedly. The bad news is that Primary {3} will be extremely difficult to trade and ride out. There will be many panic decisions leading to quick and rapid snap backs – not getting thrown off the horse will be difficult. Which is why I keep insisting on buying plenty of theta – the tape will oftentimes move fast and hard but the entire affair will stretch out for at least a year or two. Then we’ll get Primary {4} which according to the rule of alternation may be complicated and go sideways in a very unnerving pattern – if you think Primary {2} was a pain you won’t be liking this one. But that’s a few years away and with some good fortune we all may be retired by then 😉

In anticipation of some pretty heated times looming ahead I’m going to mix up the music selection a little bit – at least for a few months. What we need is some more ‘level headed’ and cool tunes which give us our daily rhythm but still instill a sense of tranquility and stability. While everyone is will be running around screaming with their hair on fire we stainless steel rats will be planning our strategic moves. We need some theme songs…

I couldn’t think of a better artist than Hybrid – even if you are not into the techno/instrumental scene you will probably have to admit that those tunes are of a unique calliber. Of course on especially profitable days I reserve myself the right to throw in the occasional Rammstein 😉

Our motto for next week should be to look out for lower prices accompanied by bullish divergences. That might sound like an impossible task but we have now developed a nice stable of indicators that should help. 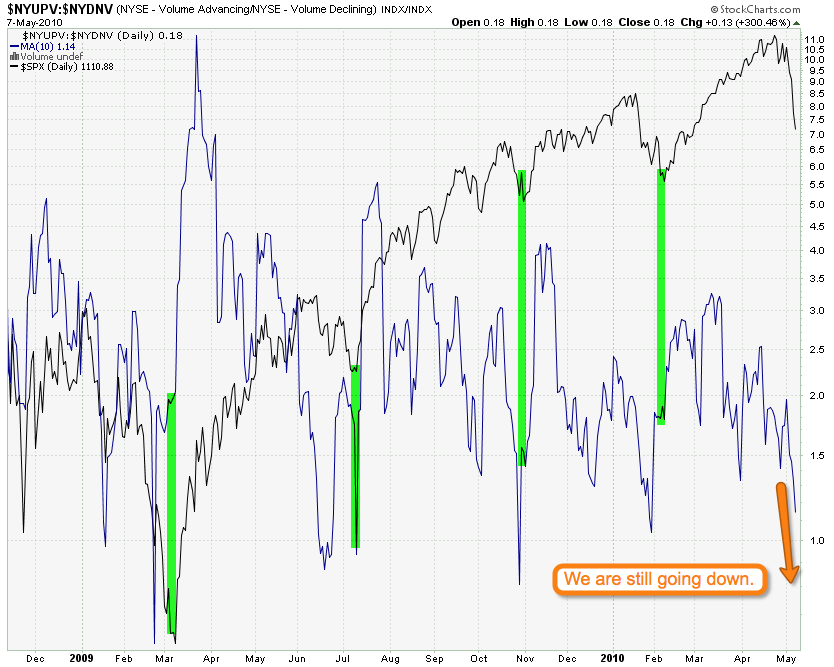 We have discussed the NYSE advancing/declining volume ratio in exhaustive detail in the past few Sundays, so I spare you (and myself) the drill this time around. If you missed out on prior posts take a look at the highlighted sections and it should become clear. You know what to look out for but thus far the readings are still dropping. What we want to see is a markedly higher reading accompanied by lower prices. 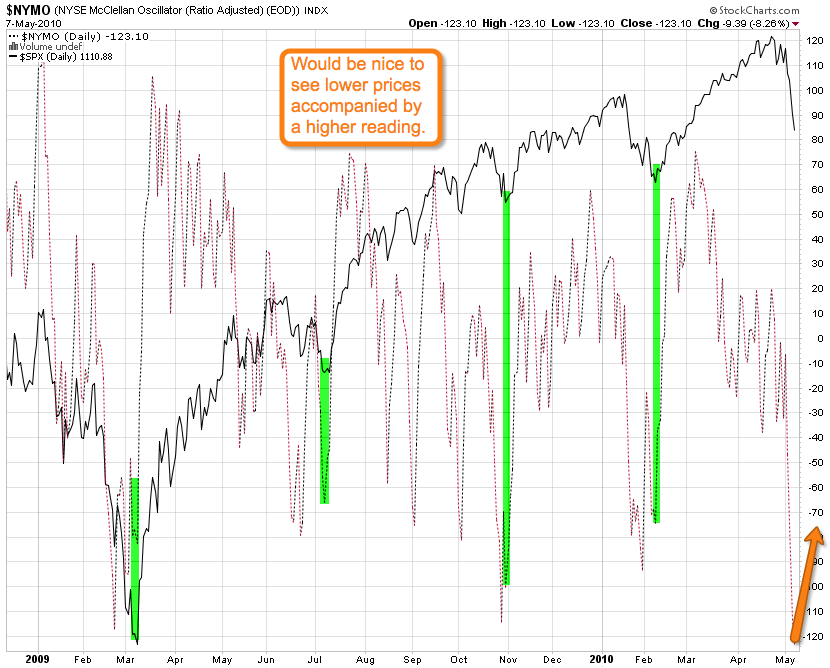 Same story on the NYSE McClellan – for the noobs: it’s a medium term momentum oscillator. I have again highlighted previous patterns and we want to see a deja vu here.

Of course divergences cannot be found on all fronts thus we look towards complementing momentum measures, one of my favorites being the 10-day SMA of the CBOE put/call ratio index: 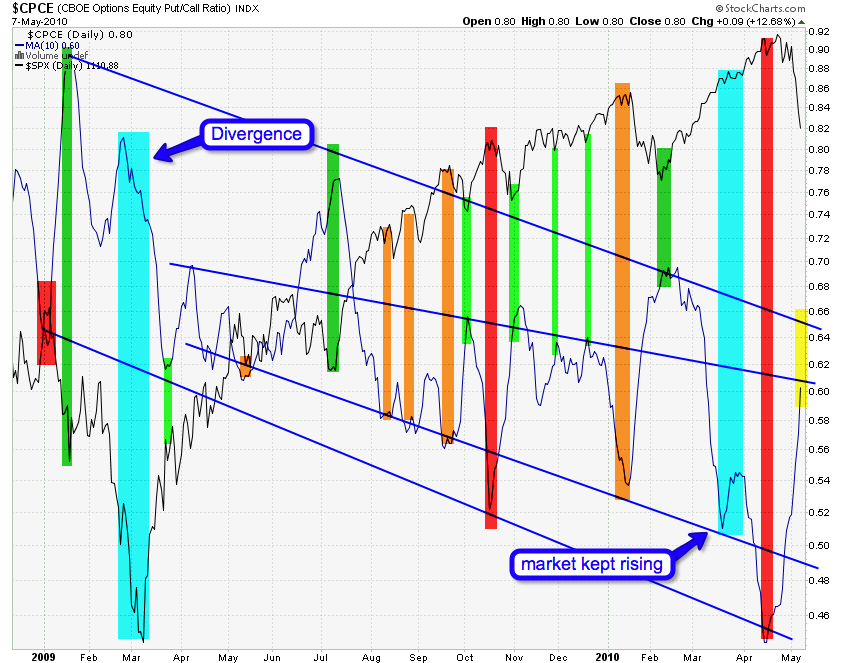 After last week’s final drop down (and run up on the SMA) this chart is now completely clear to me. I have presented this chart in the past but the past week has helped put everything into complete focus. We have basically two intersecting trend channels here – one containing the other.

The outside blue lines (which I should have given a different color) represent energy zones at which larger retracements will take place – that is the very top blue line and the very bottom blue line. The correlation is inverse as expected and Intermediate or Primary degree (in EWT speak – think weekly/yearly) reversals occur when the moving average touches those outer boundaries.

The inner channel represents Minor or Intermediate degree (think weekly/monthly) energy zones. As long as we bounce there, which we most often do, we remain in the same trend. In the past 13 months that trend was up. Divergences as highlighted often indicate that a trend change is in the making – but the exact nature of this needs more research. As you can see – we are now near an inner trend line which may be where dip buyers will attempt to step in. I however believe that we may only push down for a few days and then push all the way up into 0.66. That is where we may find a bottom and the beginning of Intermediate wave (2) of Primary {3}, assuming it has indeed begun. Sure feels like it to me… 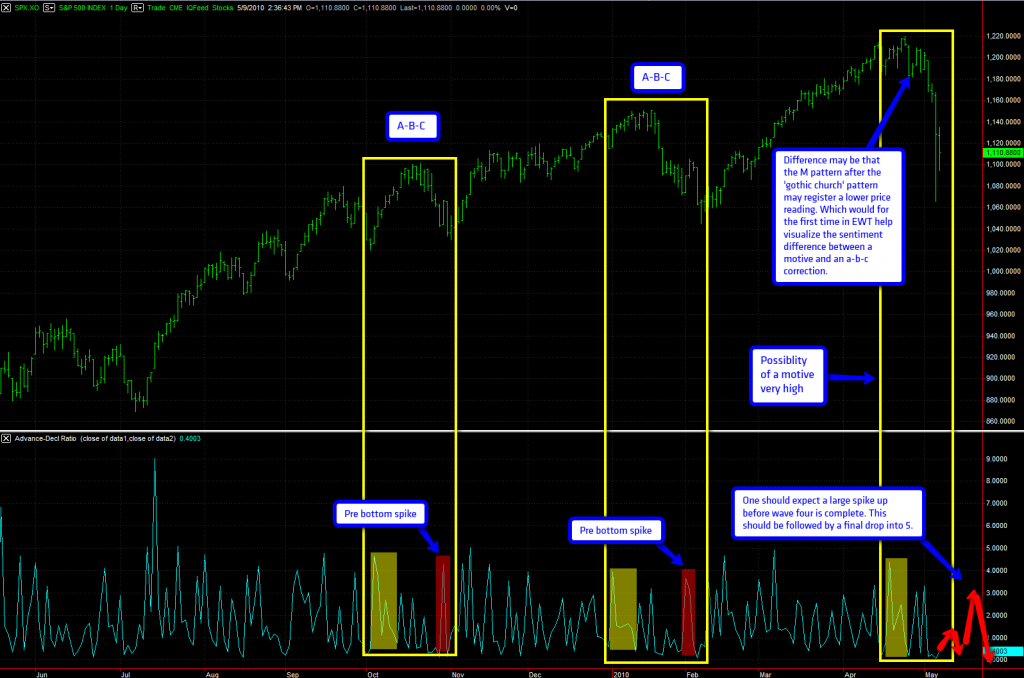 This chart somehow grabbed my attention last week and it seems to also support the prior one as these ‘gothic church + M’ fractal pattern (for the lack of a better name) appear to occur when we touch those lower boundaries on the chart above. How’s that for correlation?

Based on the prior fractals we should now whipsaw around a little and then paint a higher A/D ratio spike, which should then be followed by a final drop into wave 5 and lower readings on the ratio. Remember that this conclusion would most likely happen alongside a divergence in the NYMO and NYSE Advancing/Declining volume ratio as shown above.

But wait there is more… 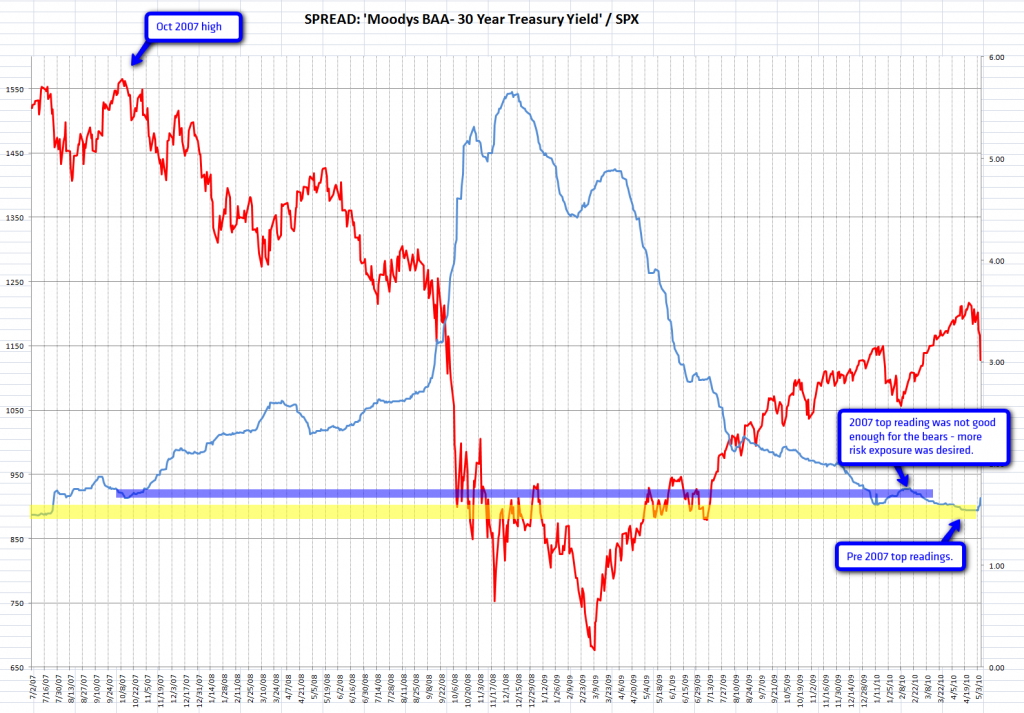 This is an updated chart of the spread between the TYX (i.e. 30 year treasury yields) and Moody’s BAA – basically corporate junk yields. As you can see we dropped through Oct 2007 levels late last year and then there was a temporary swing up as we corrected a little. Since February we have however dropped again and flattened out and readings now reflect optimism ahead of the all time market high (in non-Gold terms that is – but that is a discussion for another day).

As you can see we popped up a little last week, but not by much – complacency remains in full throttle despite last week’s mini crash. The next chart is actually what really surprised me: 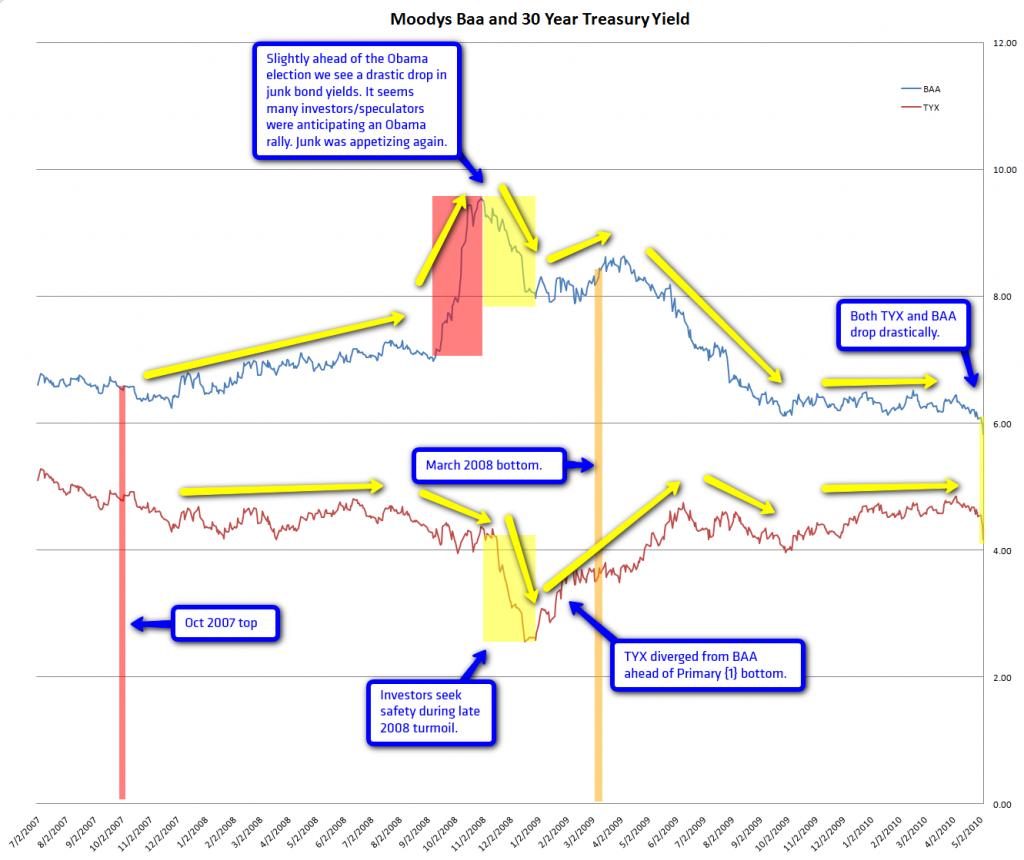 These are basically the two components resulting in the prior chart. As you can see yields for 30 year treasuries dipped last week, which is fully expected. What irks me is that, despite the slight expansion of the spread, the BAA yields dropped as well! So it seems that just like after the Oct 2007 top assets continued to push into both treasuries and junk. For some reason (which is unclear to me) both are considered as safety – an attitude owners of junk will regret in the not so distant future.

Anyway, we are looking for a continued increase in the spread – I would love to actually see the BAA push higher as we make new lows. The exact timing of these respective patterns are not completely clear to me. However, I wanted to offer it here in case someone knows something I don’t – admittedly I rarely trade treasuries – when I do it’s options on related ETFs.

It seems to me that all the above points towards further lows sometime next week or the one after. Although I don’t present a wave count today (will tomorrow) I would label a new low as Intermediate (1) of Primary {3} of cycle wave c – unless the market tells me otherwise.

You all have heard of the Euro spike earlier this evening. Here’s a little bonus chart you FX traders may appreciate. It’s a simple one – but it works very well on various FX pairs: 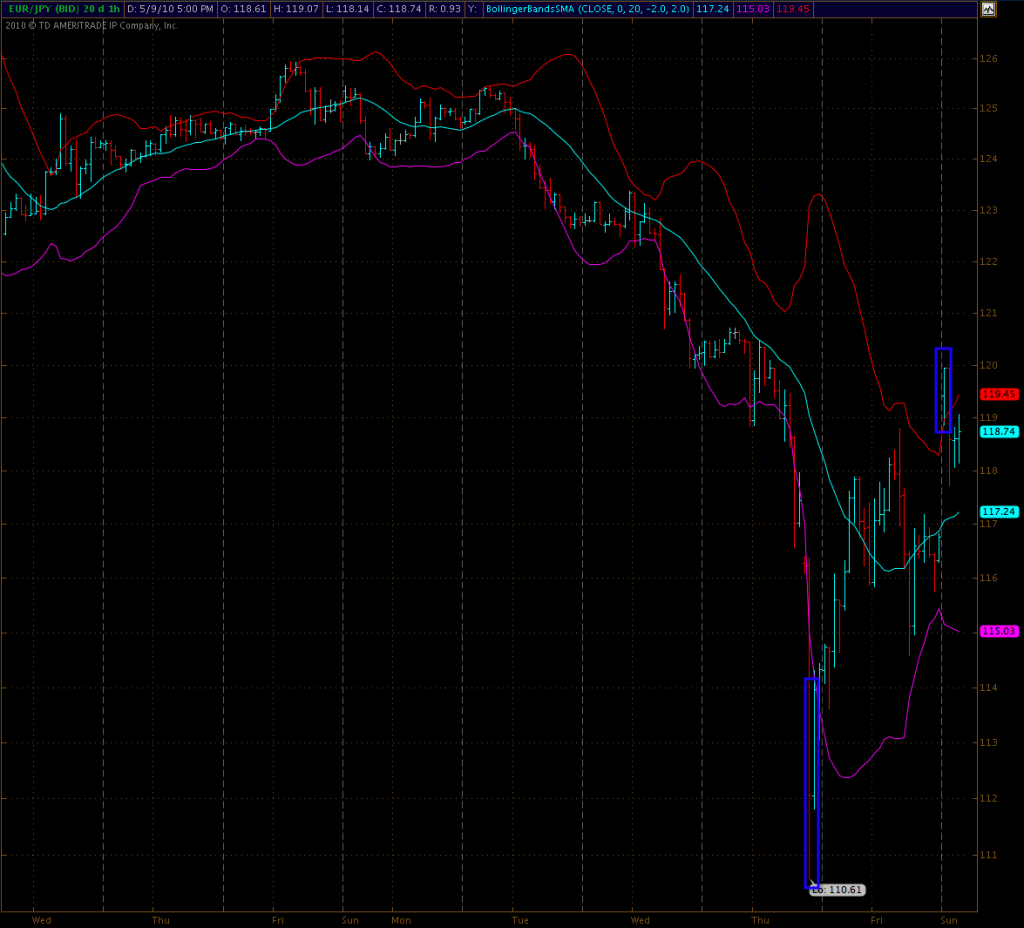 This is a very basic system that just keeps on giving for some reason. Next time you see a violent charge or drop outside the hourly 2.0 BB – take a contrarian trade. Those sweet setups can bank you some mighty coin. Congrats to Steveo77 who just did – it pays to pay attention. And I would have taken this trade had I not been busy writing this long ass report – LOL. I give and I give and I give …. 😉