Confessions Of A Teutonic Beach Dweller 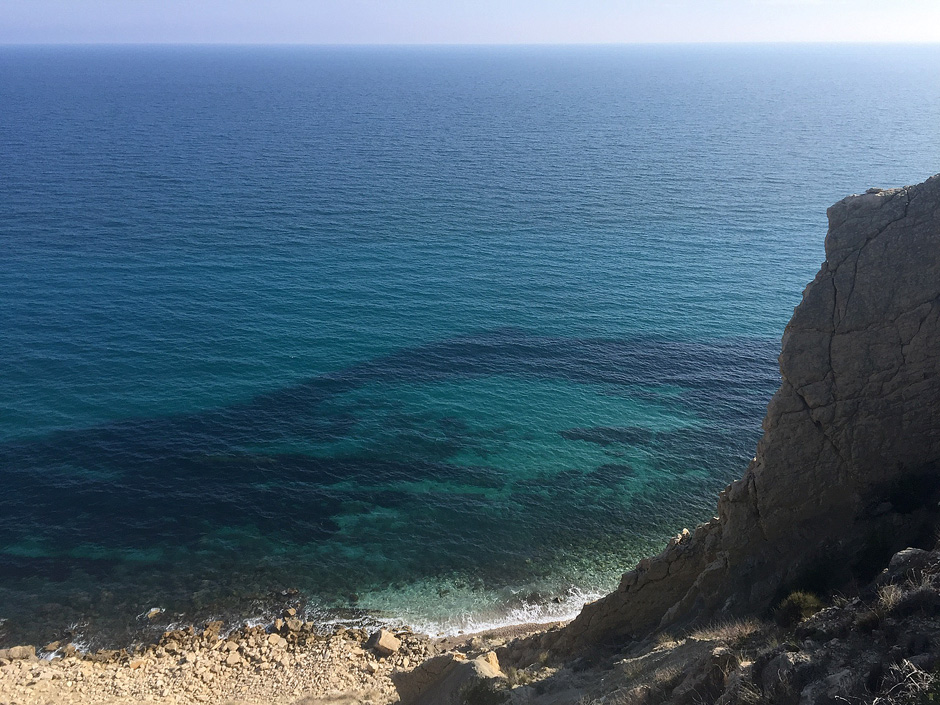 The featured image above shows the view we found upon our arrival mid last week, but in the interim cloudy weather has moved in turning the horizon into one giant white reflector. Quite frankly I’m actually not a big fan of neither the beach nor the ocean. I just don’t get the point of aging your skin with damaging UV levels whilst constantly picking sand out of every orifice. And having been raised in the Austrian highlands I’ll take an alpine excursion over a day at the beach any day. Before you get your hopes up – all incriminating photos of me wearing Lederhosen as a young child have long been destroyed.

Now the only reason why we’re heading to various islands or Spanish seafronts during Las Fallas simply is the weather, which in March is still quite chilly up in higher elevations. Officially it’s still winter in Europe until we return and unless you’re willing to endure 14 hours plus crammed in an airline seat like a sardine the Mediterranean beaches or the Canary Islands are our best bet.

What I am enjoying the most here however is the silence. As you can see we’re located right on a cliff facing the ocean and all we can hear all day is the sound of waves crashing against the rocky shoreline. The entire development in which we’re located is empty, which means we practically own the place. No screaming children, no parties, no drunk tourists, no traffic, no nothing. This might sound boring to you but having to put up with rampant and increasing tourism in Valencia for most of the year it’s pure bliss to us.

By the way in case you’re wondering what I’m doing posting here in the first place: Scott is indisposed today and asked me to keep you guys entertained. He promised to return tomorrow and continue bitch slapping you all into submission. And he couldn’t have picked a better day as I’m seeing entries galore! 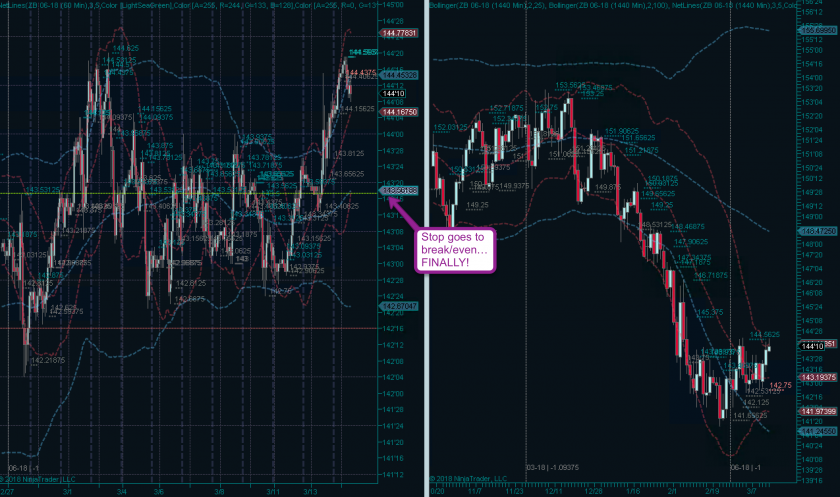 But first, good news! Our ZB campaign is finally getting out of the gate, and it was about time as I took this one before my vacation! Stop now goes to break/even, which I know is conservative but I have long term plans for this one.

Before we get to the entries a disclaimer: We just had Draghi deliver his speech and we’re scheduled to receive Retail Sales reports an hour before the open. So it’s possible that some of the entries posted have either been invalidated or are beyond reach. 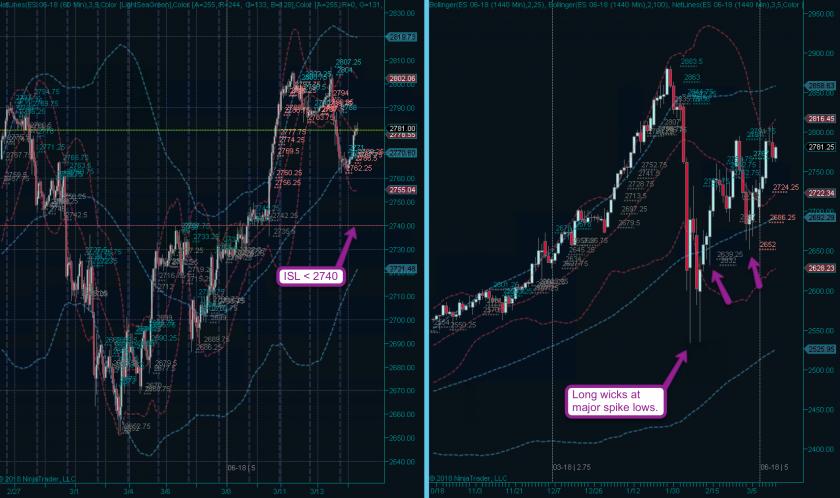 The E-Mini has been whipsawing its way sideways for a while now and although the bearish case has been losing some of its luster it’s not completely off the table just yet. That said just observing the daily price action I must point out that the length of the major spike lows over the past three weeks appears to be outweighing those on top of us. That tells me that buyers are ready and capable of defending the 100-day SMA, full well knowing the consequences. Given the ST formation I’m willing to take out a small exploratory long position with a stop < 2740. And by small I mean 0.5% or less – I caution all of you to similarly apply conservative position sizing in combination with wide stops. 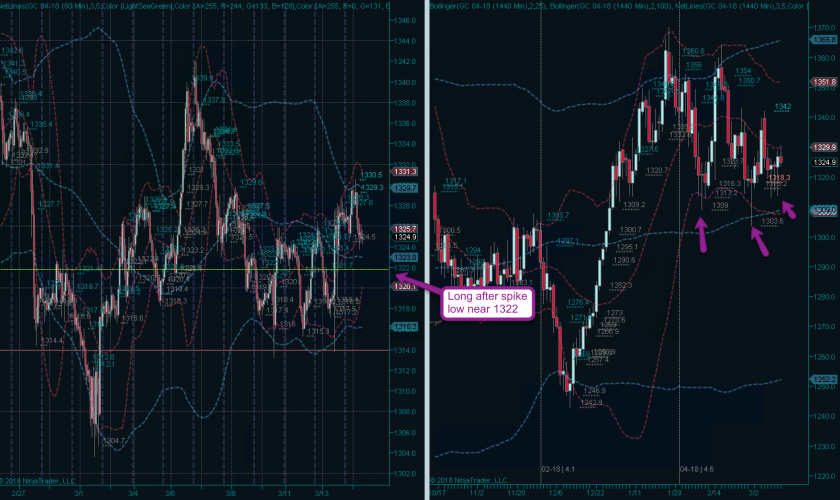 I got stopped out of gold at about 1R a few days ago and strangely the recent reversal lower compels me to take the same entry once more. However I first need to see a drop to about 1322 followed by a spike low. 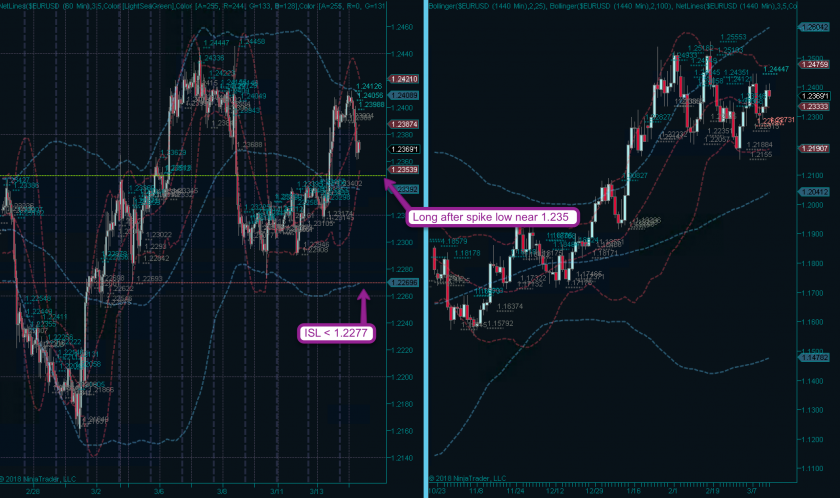 EUR/USD is in a similar formation right now and although the sheer thought makes me throw up in my mouth I need to be long here after a spike low touching 1.235 or below. ISL would be < 1.2277 which ought to be keeping us out of some wild swings.

But wait there’s more! Please grab your secret decoder ring and meet me in the lair: