Steady as she goes. I’m starting to see a bit of exhaustion here – not over in equities, mind you – but on the sentiment side. Let’s call it contrarian exhaustion – it’s all over the financial blogosphere, in particular when I go slumming over at some digital caves populated mostly by perma-bears. After four years of receiving a repeated ass-whopping at every crucial stage in the game I’m actually surprised that there are any of them left! But the really sad story about most bears (as well as most retail traders) in general is that almost all of them will have been vanquished when it’s finally time to start dipping into some short exposure. Yup, the market is a cruel mistress and she doesn’t dig folks with an opinion. 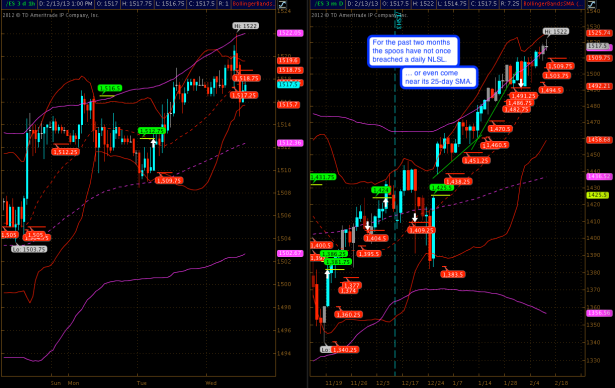 So let’s talk about strength! Here’s the E-Mini which has not breached one single daily Net-Line Sell Level (NLSL) for over two months. Let alone has been anywhere near its 25-day SMA – there is absolutely nothing wrong with this market right now! Tape like this should be shown in a pertinent textbook under the keyword ‘bullish trending market’. Enough said. 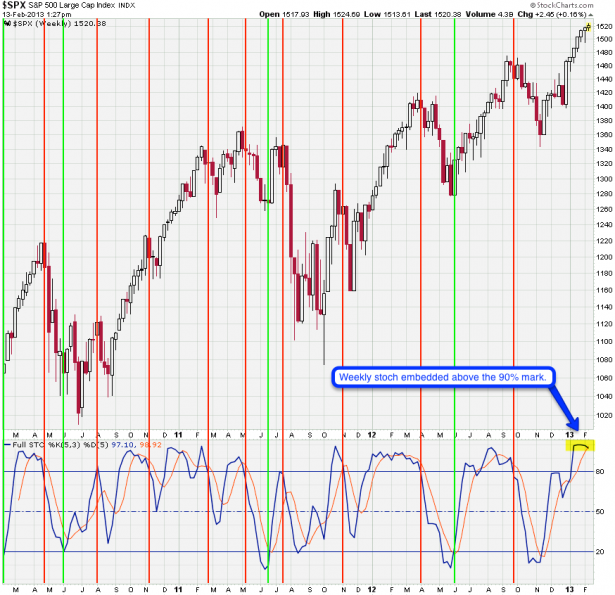 This is usually what really traps the average bears – they look at something like stochastics, RSI, or a MACD and decide that the tape is overbought and most definitely absolutely invariably will have to make a u-turn tomorrow. Unfortunately (or fortunately for naughty speculators like me) things don’t always play out like that in the real world. The weekly for instance has been embedded above its 90% mark for weeks now – a bit unusual to see it so sky high for that long but it’s been known to happen. As you may recall this chart has predicted major corrections rather nicely for us – but our trigger is a breach below the 80 mark. And even then it could be a fake-out – but I digress. 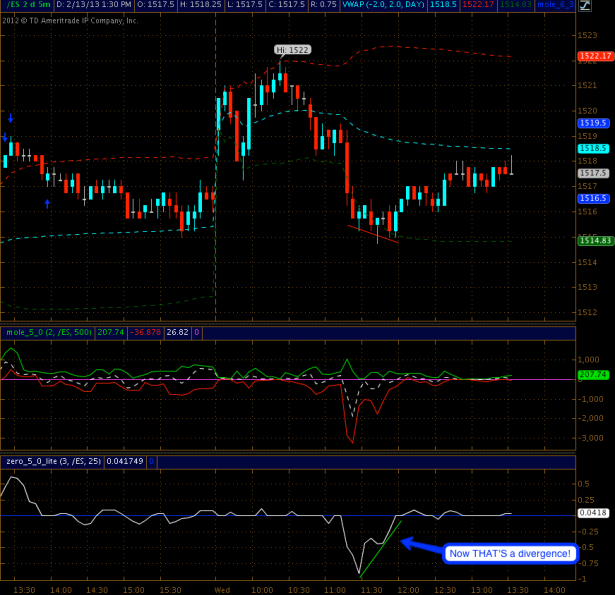 On the daily side it’s been emotional today. Some of you asked me about a Zero signal divergence near the top today. I used my best microscope and couldn’t find one. BUT if you step back and don’t focus on the trees then you may pick up that monster bullish divergence we got at the bottom today. Now that’s what I’m talking about and I hope you scaled into some longs there. 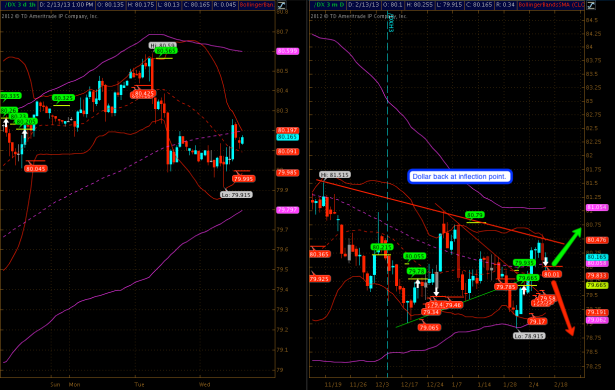 I have been talking a lot about the Dollar and it’s not just because it keeps pissing me off when visiting the ATM over here in Spain. Although it’s gone nowhere fast in the past few months we should take note of the respective resistance and support levels that it seems to be bouncing around in. Somewhere in there is that 100-day SMA which I think remains valuable as an inflection point. Not having much hopes regarding that daily NLSL holding but I must remain long until it has been breached – short below that 100-day of course. 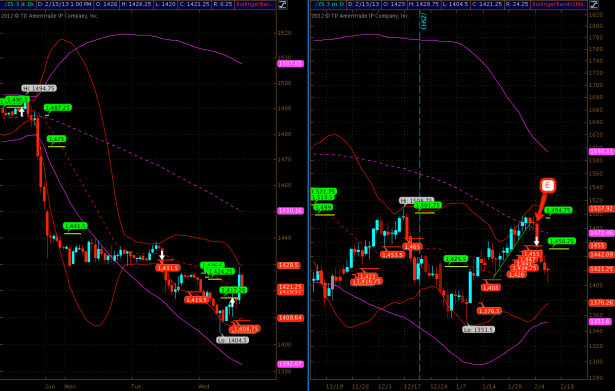 Quick update on soybeans – you may recall the setup near the 100-day SMA and if you were around then you hopefully slipped into some shorts as it failed its Maginot Line. We’ve seen a pretty consistent sell off since then and it’s passable to start taking some profits at this point. I’m going to keep a few contracts running into 1380. 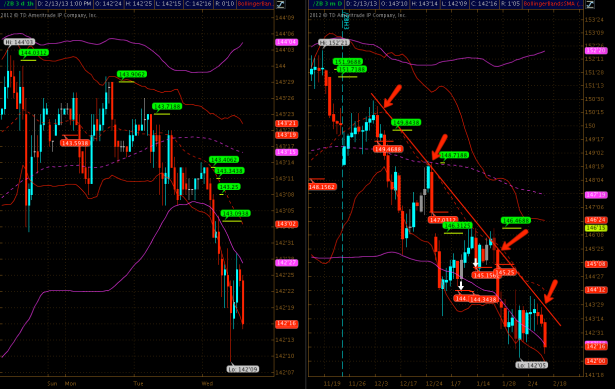 Bonds – I’m really fascinated about bonds right now and have been pimping this chart here repeatedly. We got another short setup a few days ago and the sawtooth pattern along that diagonal continues downward. Many many opportunities to get short here and I trust some of you took advantage.

I’ve got nice FX setups tonight – please join me in the lair:
[amprotect=nonmember] More charts and non-biased commentary below for anyone donning a secret decoder ring. If you are interested in becoming a Gold member then don’t waste time and sign up here. And if you are a Zero or Geronimo subscriber it includes access to all Gold posts, so you actually get double the bang for your buck.
[/amprotect] [amprotect=1,13,9,12,5,10] 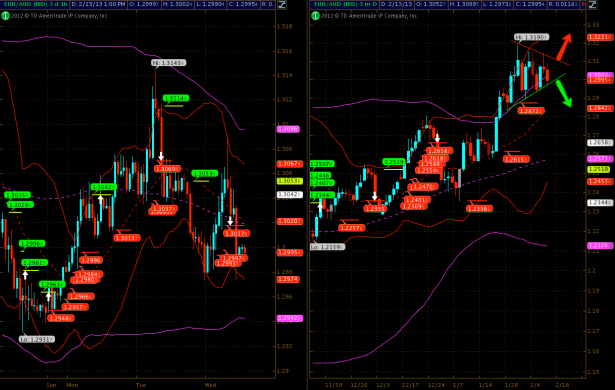 EUR/AUD is starting to produce a wedge and I am eagerly anticipating a resolution here. Probably is going to take a few more days but put this one on your watch list. 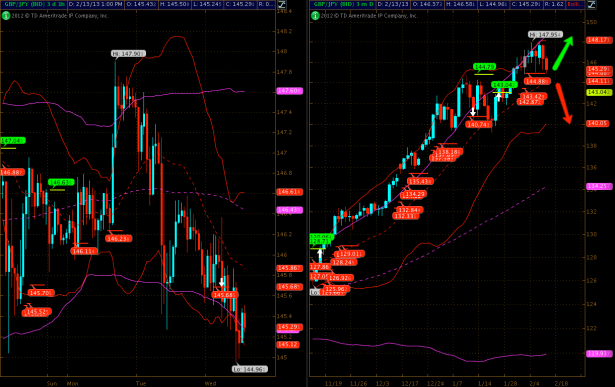 GBP/JPY – a bit exotic but it’s a nice SMA play – you know the rules. I would watch the 25-hour for better fine-tuning of your entries/stops. 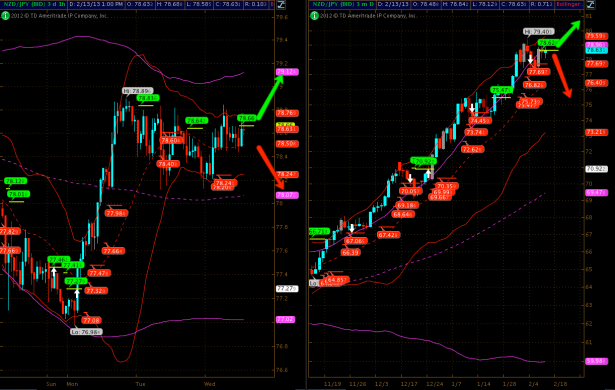 NZD/JPY at its NLBL – there’s also an hourly right now and that’s convenient. 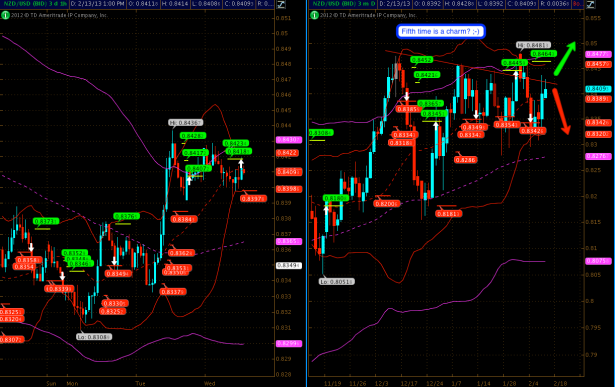 NZD/USD back at that diagonal with a vengeance! And we’ll do the same thing over again – long on a breach and short below the line. 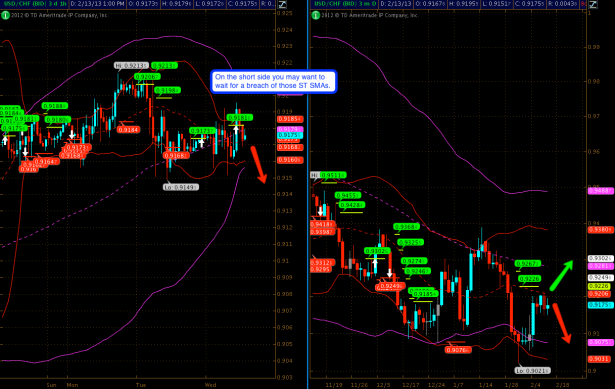 USD/CHF is looking weak and I’m playing that 25-day SMA. If you’re not in yet then watch those two hourly SMAs which are currently entangled.