Ding Dong – The Witch Is Dead!

Today marks a special day for me as I have the pleasure to cross out one name on ‘Mole’s Black List’. You may have guessed it – that name is ‘Blockbuster’ – a company I have hated with a passion since its very inception. 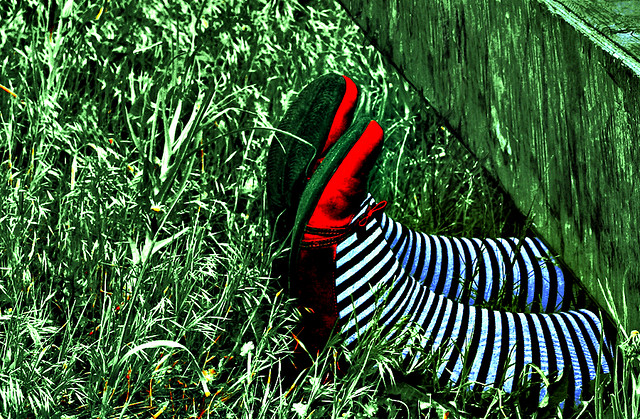 Hoorraay – the witch is dead!!!

I distinctly remember the last time I ever set foot into a Blockbuster store, which was late 2000 in Cupertino, CA. I just had returned my usual collection of smut and cheesy Chinese martial art B-movies and the pimply ‘store manager’ tried to hold me up for a pretty significant late fee. After I told him to stick his late fee where the sun don’t shine I ripped up my membership card and vowed to never ever return. To be clear – even when I was a patron of Blockbuster I always hated them for their exploitative business practices. They were the big dog on the block and pretty much got away with whatever they wanted. Their ‘help’ was arrogant, lazy, and condescending – and it was pretty clear that they didn’t give a rat’s ass about your business.

Back then, just before I walked out of that store in Cupertino, never to be seen again, I told that ‘store manager’ that Blockbuster’s business model was doomed and that they would soon go the way of the dodo. In response the arrogant git gave me a sneer and mumbled something along the lines of ‘whatever… a…&@!!’.

Now, there is a lesson to be learned here and it’s not about who’s having the last laugh in the end. Let’s face it, that ‘store manager’ probably hopefully grew up and did something more productive with this life – maybe a profession where is excellence in shabby customer service and mental cruelty is amply rewarded (i.e. water boarding specialist or tax accountant). It’s all water under the bridge and quite frankly, my life isn’t changing the slightest bit now with Blockbuster out of the picture (get the pun?).

No, the lesson learned for us stainless steel rats is how much longer shit takes to hit the fan. Ahaaaa! I can literally see all your brains light up in instant recognition. See, it took a whole decade before the evil Blockbuster empire followed the horse buggy into the sunset and if you had asked me back in 2000 I would have bet good money that it would be closed curtains for them by 2005.

Fast forward to today and we have a market that keeps melting higher on fumes. Every time we hit certain resistance/support levels we churn around a little – Helicopter Ben pushes a button – and off we go. And once again, I do see the writing on the wall, just like back in 2000. But this time around I am taking the past eighteen months as a learning experience – one that has taught me that the, barring a catastrophic event, the incumbents will fight tooth and nail to stay in power and do whatever it takes to keep ‘looking and feeling normal’. And when I say ‘whatever it takes’ – I mean just that.

Of course, despite the fact that I am a promiscuous debutante happily offering five Dollar tricks on Wall street, I am not going to metamorphose into anything resembling a ‘bull’ either. I simply will follow this market wherever it will take me. Each stab higher raises the odds for a reversal – but it also establishes new support levels for the longs. So, heed caution when betting the farm on some cataclysmic event. Yes, it will happen eventually – probably in the next eighteen months – but most likely it’ll take much longer to play out than any of us care to admit.

Now a quick look at the charts:
[amprotect=nonmember]
Charts and commentary below for anyone donning a secret decoder ring. The rest of you guys will have to wait until tomorrow – sorry. If you are interested in becoming a Gold member then don’t waste time and sign up here. And if you are a Zero subscriber it includes access to all Gold posts, so you actually get double the bang for your buck.
[/amprotect]
[amprotect=1, 10, 9,5,2] 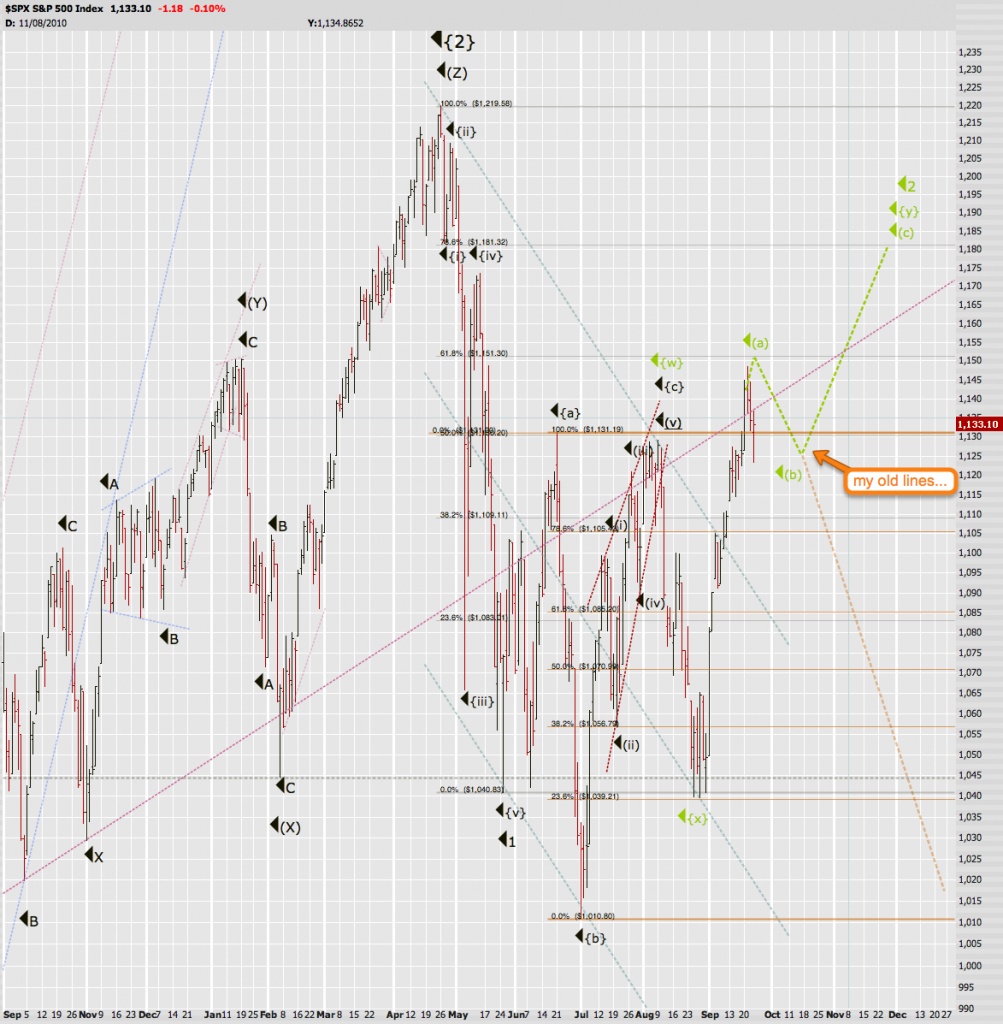 I posted this chart two days ago and decided to leave my old lines on it to illustrate something. First of course we did push a tiny bit higher and then dropped to almost exactly my 1125 mark, then snapped back to above 1130. It’s obvious that the market considers 1130 an important support line and even if the shorts manage to break it there will be incessant attempts to recapture it. The more important thing than me stroking my ego is that things are unfolding a lot faster than I dare drawing them. As of right now I have us whipsaw around for another month and then push higher until the end of the year. But maybe we’ll do that all in a matter of weeks – who knows – quite obviously seasonality is out and volatility is in.

Finally, look at that diagonal that’s drawn right through the entire chart. We are near it again and freeing it to the upside will give the longs a cushy trampoline to bounce higher. If we stay below it the shorts have a fighting chance – however it remains questionable whether or not they will muster the energy to put up any resistance (another pun – well, I thought it was funny). 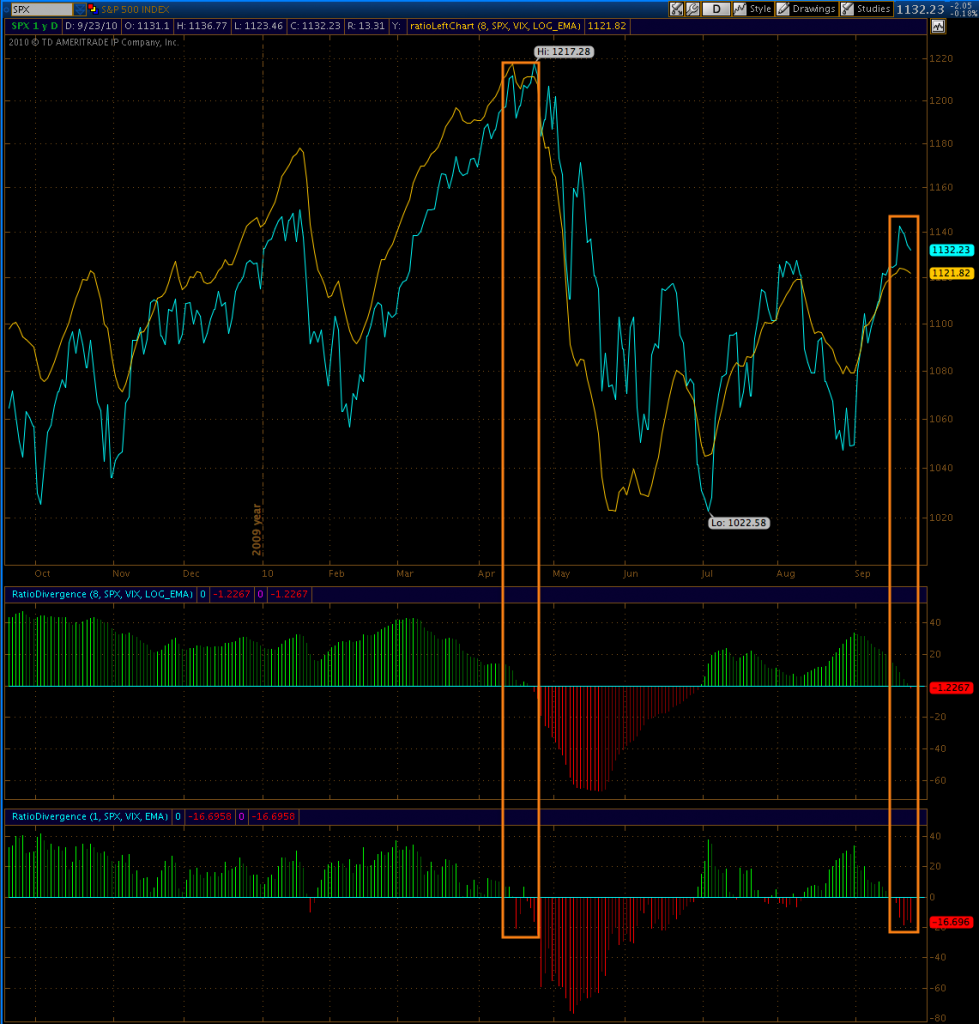 But being open minded does not mean ‘non-bearish’ or ‘bullish’ either – after all there are some cracks out there if you bother to look. Some of you may remember the SPX:VIX ratio left chart which I turned into a histogram (one smoothed and one raw) on the bottom of this chart. Seems to me that the current period looks a lot like the late April period, just before we dropped and that would confirm what I’m currently seeing on the daily Zero. But unless that one drops below the zero mark preferably with a divergence I am playing it safe and keep the majority of my assets in cash. 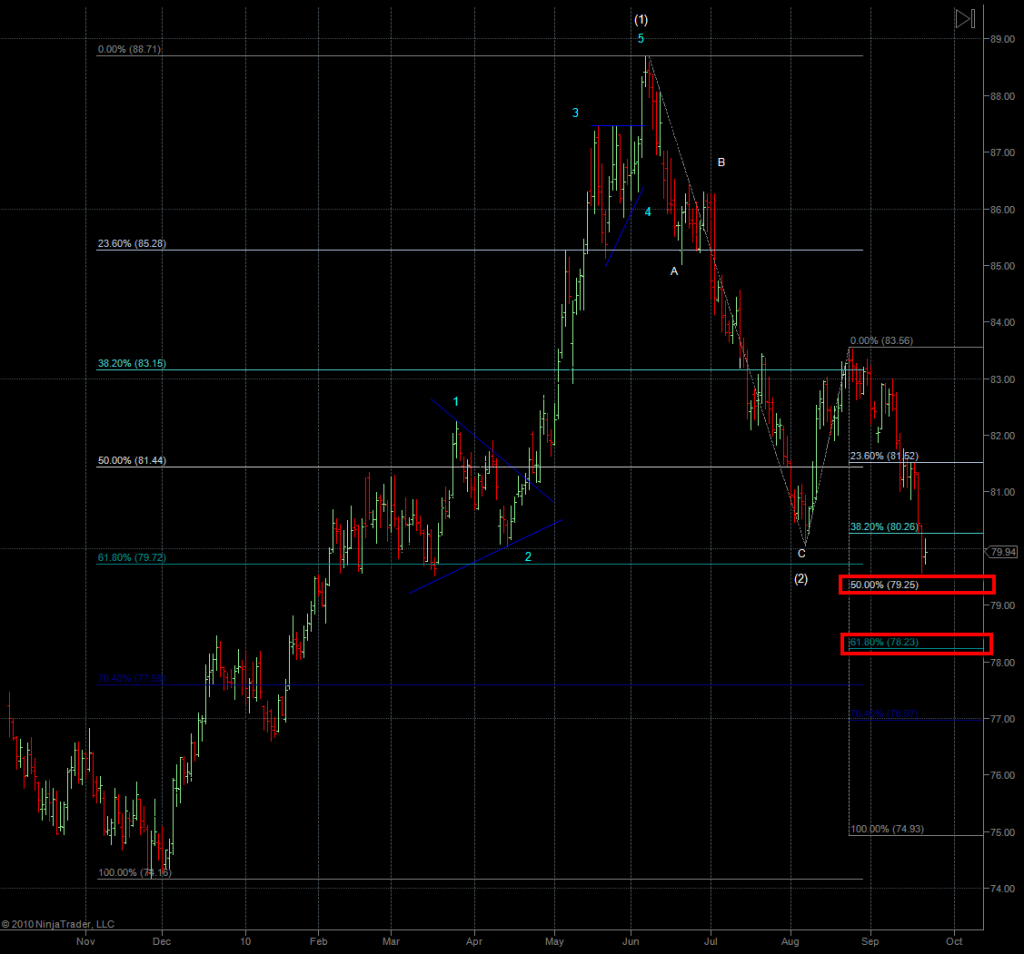 However, as the current melt up in equities is a mere product of the destruction of the U.S. Dollar, it will take a strengthening in the DXY to give the bears a fighting chance. I drew a simple fib extension from the very top to the prior low. This tells us the multiples of the current drop in relation to the prior one (which I have forgotten to re-label – sorry but I have to get this post out). At this point it seems that 79.5 may be holding, which is near 79.25, the 50% fib. It’s possible that we’ll see a little bounce followed by a final drop to the 61.8% fib mark at 78.23. Quite frankly, that would be the first level at which I would even think about going long the Dollar (or inversely shorting the Euro). 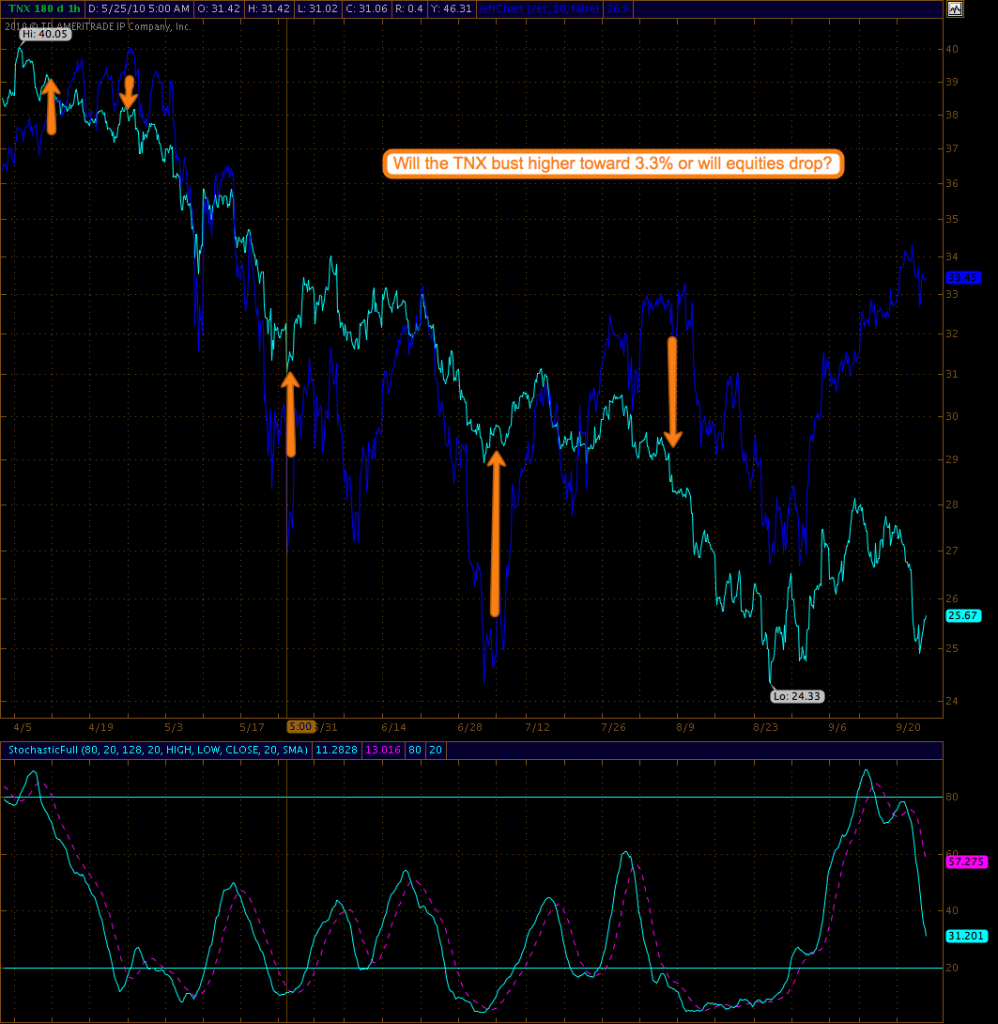 Now, this chart has been confusing me for the past few weeks. Look, the TNX has traditionally led equities and for a long time it was one of my most favorite leading correlation. Until it started lagging, at which time I kind of gave up on it. Then I realized that there was some kind of ‘mean reversion’ going on via equities. I have attempted to illustrate the situation with those orange arrows. Equities continue to defy the TNX but then suddenly revert back to it – very interesting.

Now the gap has not been wider and the question I have now is this: Will the TNX suddenly spring higher toward the 3.3% mark or are equities about to take a tumble? Frankly, I don’t know – and again unless my other indicators tell me that stocks are going down I will accept these ‘unique conditions’ as our brave new (manipulated) world.

On that thought – please remember that tomorrow is yet another POMO day – trade accordingly.