An increase in volatility begets market reversals – which either turn into meaningful corrections or are simply used as buying opportunities. Time to throw out the riff-raff so to say…

Charts only available for evil lair members – freely available to everyone after the session: 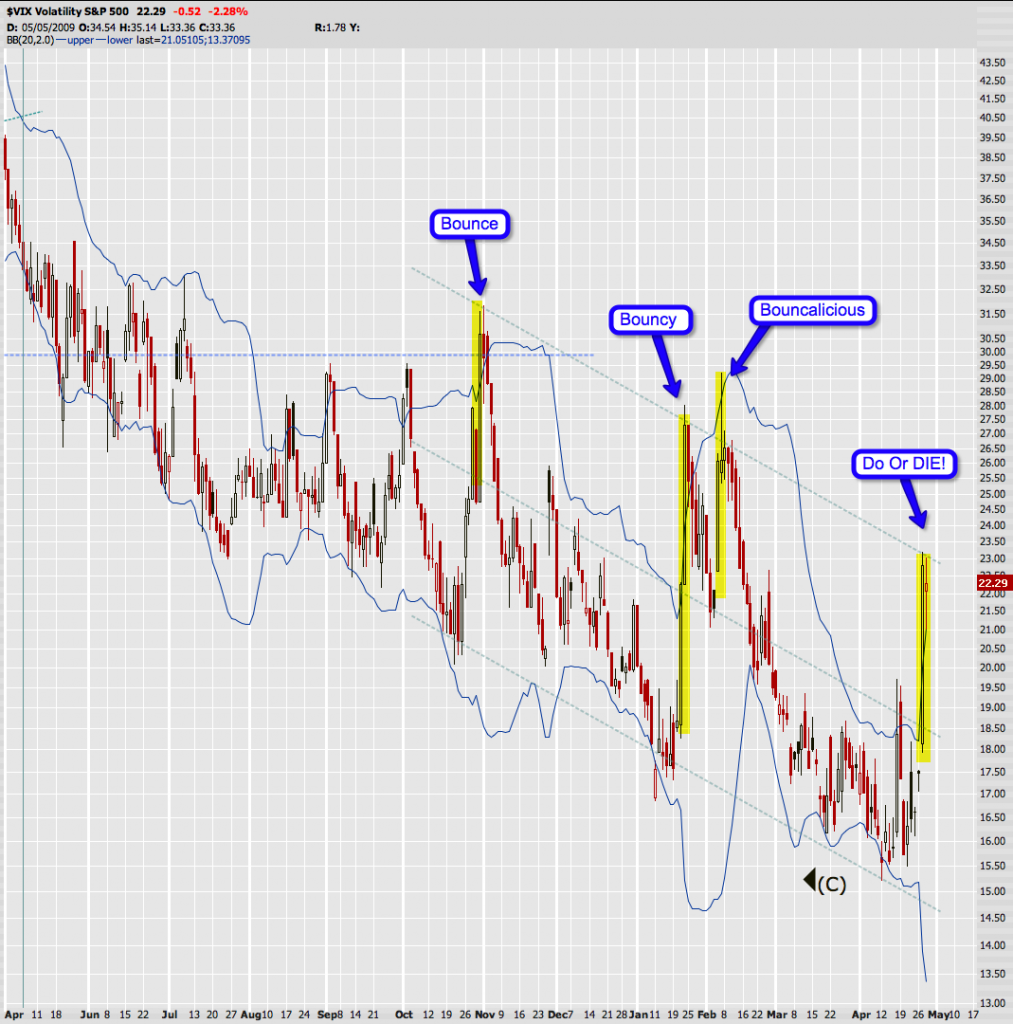 As you can see Mr. VIX is stuck in a nice clean channel from which there seems no escape. But escape it must – lest the bears remain trapped in this ‘buy-the-dip purgatory’ they have found themselves boiling on slow flame for the past year.

Bottom line: If this thing snaps back the punishment for the bears will be of biblical proportions as we have now stretched out that 2.0 Bollinger as if Max DeLong had his dirty way with it. A short term bounce is expected here but should be followed by a selling frenzy. 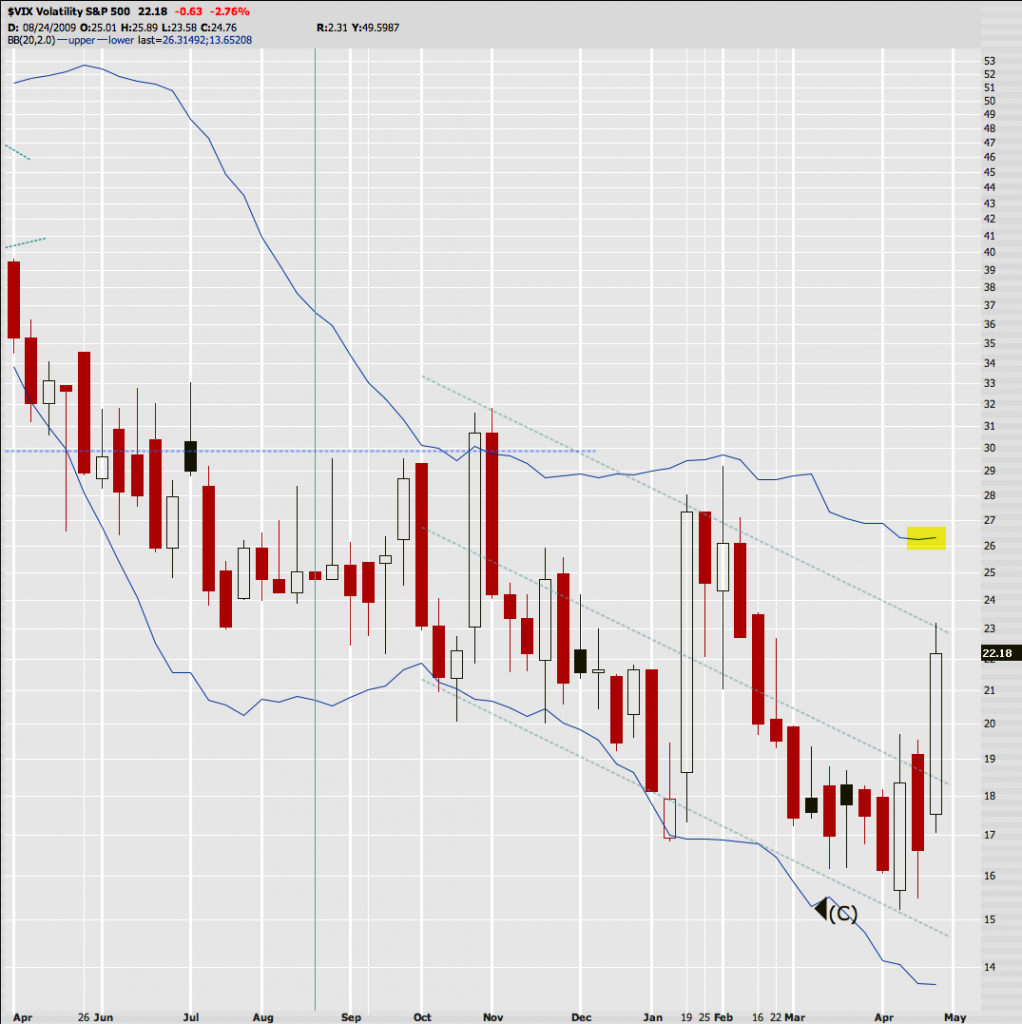 Friend of the blog Chris Carolan (a master of charting in his own domain and one of the folks I have utter respect for) suggested the Bollinger on the weekly VIX as a possible target – assuming we keep pushing higher here (i.e. lower in equities). Sorry for stealing your chart, Chris – just trying to do God’s work 😉

I’ll be back once I dug up a few more juicies for you guys.

Club Zero Update: I drew this channel on the Zero Lite this morning and low and behold we are still in it. I think this is a textbook example of how Mr. Zero can keep you out of trouble when early morning price gyrations are trying to fake you out. Sorry, Zero subs only – again, it’ll be available for free to everyone after the session. Make sure you come back for it – this is not one to be missed: 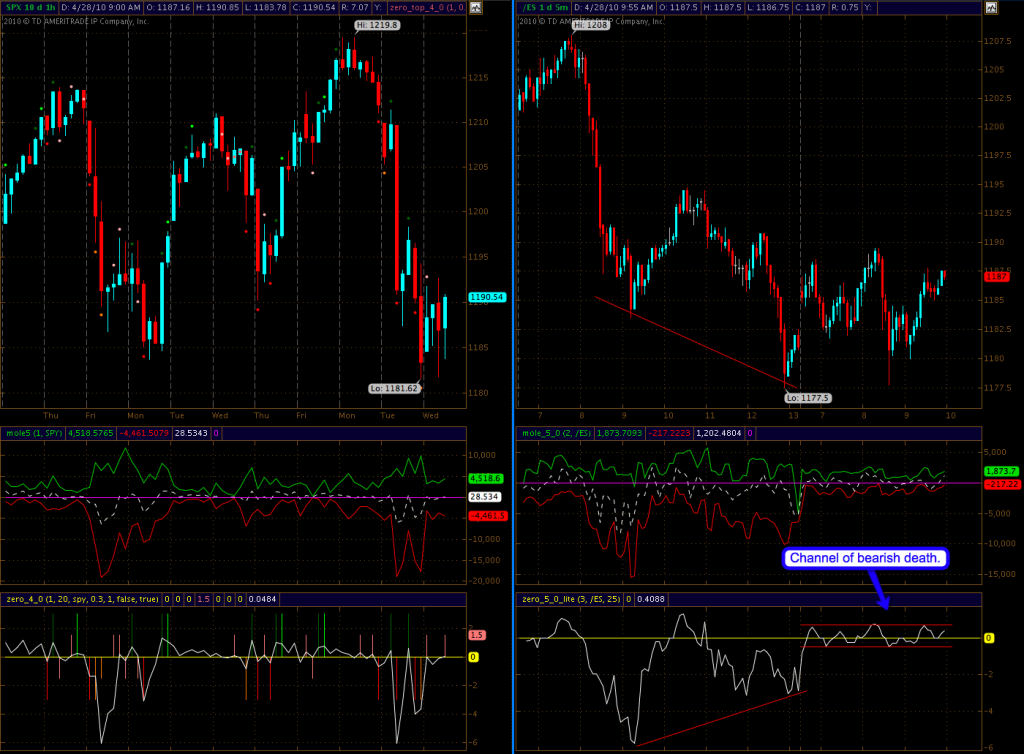 Zero subs know that I drew this channel about ninety minutes ago – and thus far we’ve remained stuck inside. That is bad news for the bears on a short term basis. We need to clear this thing or the dip buyers will employ their kung fu grip in about one to two hours from now.

Stay frosty until we breach today’s highs and cross that upper boundary of the channel.

Recent reports of a strengthening recovery are not fully supported by the behavior of consumers on the web. At the Consumer Metrics Institute we measure the depth and quality of web based consumer “demand” on a daily basis, and during this recovery the year-over-year changes in “demand” that we measure actually peaked in August 2009 and have been declining ever since.

In fact, our “trailing quarter” of web based consumer demand slipped into year-over-year contraction on January 15th, and since then we have been plotting the progress of this 2010 contraction event against the profiles of similar events in 2006 and 2008.

As you can see from the above chart the current consumer “demand” contraction event is unique: if there is a “second dip” it may very well be unlike anything we have seen recently. Instead of a “call-911” type of event in 2008 or the “hiccup” witnessed in 2006, we may be seeing a “walking pneumonia” type of contraction that has legs.

Over the most recent 7 quarters our economically “upstream” Daily Growth Index has led the “downstream” factory GDP numbers by about 17 weeks. If that pattern continues to hold, we are currently about halfway through the consumer transactions that will drive the third quarter’s production and GDP. If the blue line shown in the above chart continues drifting laterally over the next 40 days, the 3rd quarter 2010 GDP will look a lot like what we have previously projected for the 2nd quarter 2010 GDP, contracting at a mild but persistent rate.

In summary, our data is telling us that U. S. consumers are very reluctant to take on the kind of debt that they have traditionally assumed when pulling the economy out of previous recessions. Even a recent upturn in our retail index faded once the seasonal impact of the forward shifted Easter holiday had passed. Furthermore, even during the Easter retail up-tick the quality of the transactions was not very high. Big ticket items requiring longer term financial commitments were relatively scarce, and for that
reason our Weighted Composite and Daily Growth Indexes did not materially respond.

Our mission at the Consumer Metrics Institute is to measure (on a daily basis) exactly how consumers are leading the U. S. economy. We “mine” nation-wide internet consumer tracking databases on a daily basis for early warnings about the demand side of the economy. Our data is significant upstream economically from the factories and the products measured by the GDP, putting us far ahead of the traditional economic reports. Perhaps our data is too timely; we are so far ahead of conventional economic measures that our story generally differs (either positively or negatively) from the stories being simultaneously reported by more traditional sources.

I realize that your readers are probably tired of hearing about the recession, and frankly our data is certainly less uplifting than the picture currently being painted by most economists. But our data has substance and (as you can see) the chart is telling us that something actually is “different this time.”

Well, isn’t that a how a howdy-doody – some additional evidence that the recently hyped consumer confidence numbers were as usual smoke and mirrors. Buy buy buy!! 😉

For the record however – although I allow myself the occasional Denninger moment this should not affect our TRADING. If certain trend lines and measures are broken we will trade this market up without compunction. Always remember folks – fundamental news and economics mean very little when it comes to trading. Case in point? The past 13 months.

Zero UPDATE: We are running out of time today: 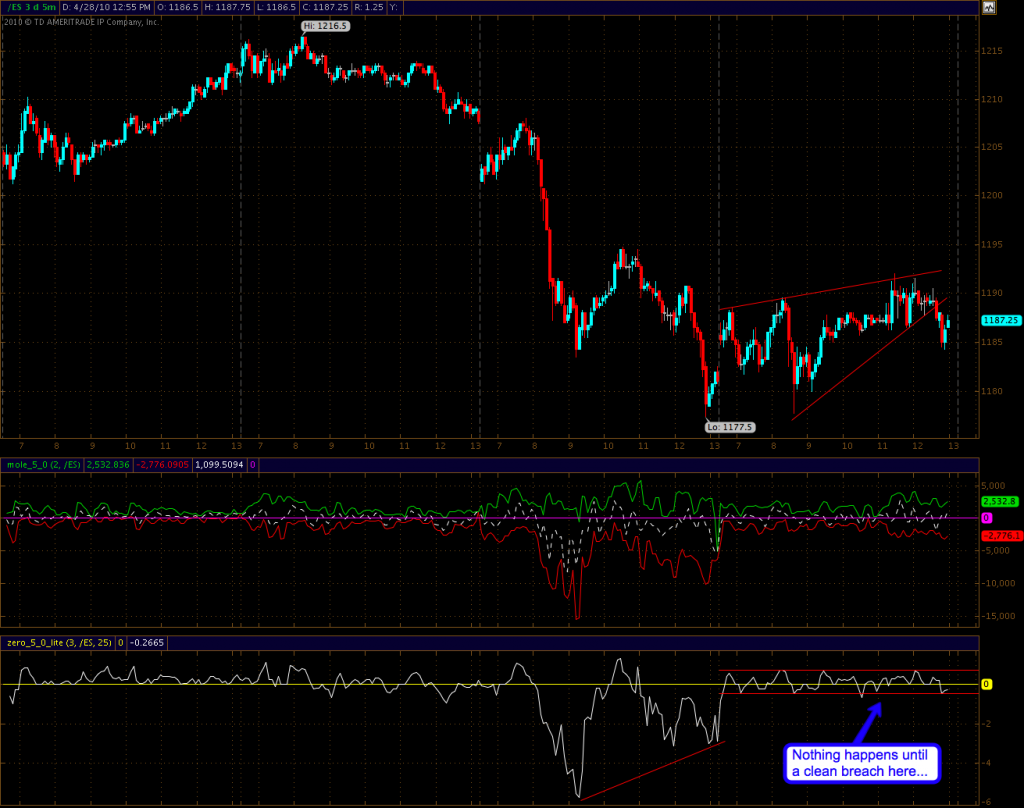 Well, we have 15 more minutes in the futures for a breach here – not sure it’ll happen…