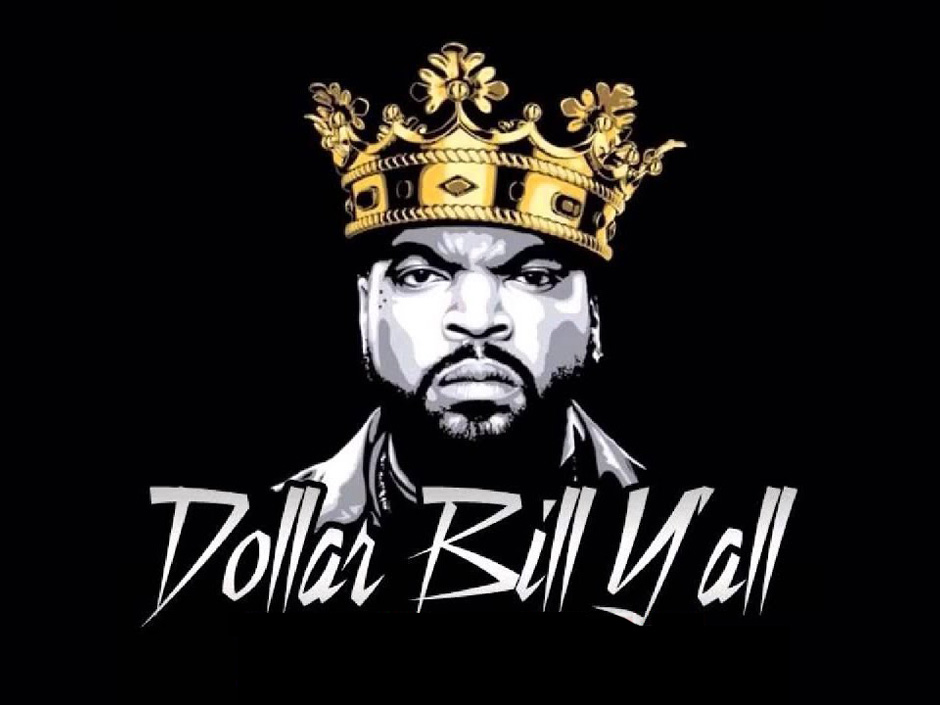 Have you noticed that Trump hasn’t been bitching about the Dollar even once over the past few months? Which may come as a surprise as it’s remained on a massive tear higher for over two years now. One that has finally propelled it into shouting range of its coveted 100 mark. Maybe the Donald has finally realized that multiple efforts by the Fed to stomp it back lower have effectively been rendered fruitless. However despite an ever strengthening Dollar the U.S. economy continues to run on six cylinders. So it bodes the question: Does it matter? Can you have your economic cake and eat it too?

I haven’t lived stateside for eight years now and retired from the software industry in August of 2008. Strangely however I keep getting emails from recruiters for various high level positions back in the U.S. Which tells me that they really must be scraping the bottom of the barrel if they are dusting off an old resume which hasn’t been updated since the first Obama term. 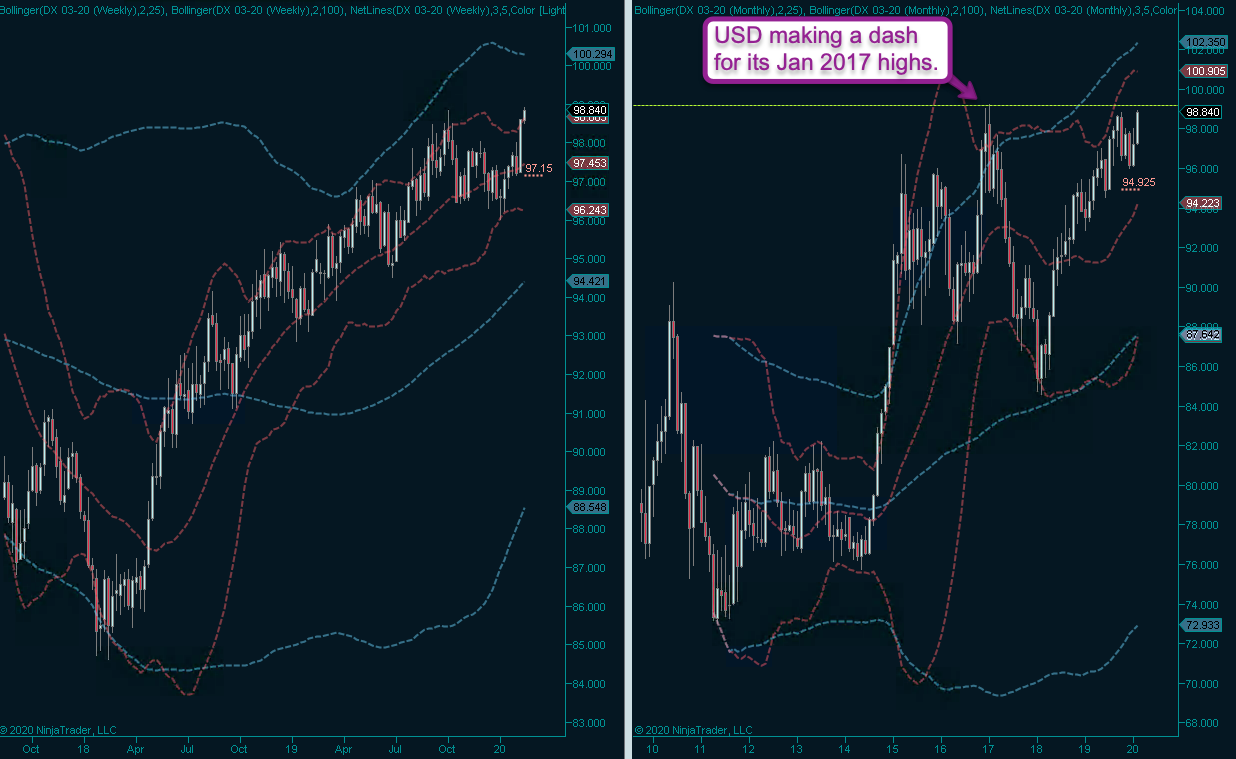 Even the most ardent opponents of President Trump have a hard time arguing against the fact that the the U.S. economy is running white hot right now. Whether or not it’s only the top 1% that benefits is debatable but recent polls suggest that the opposite may be the case. 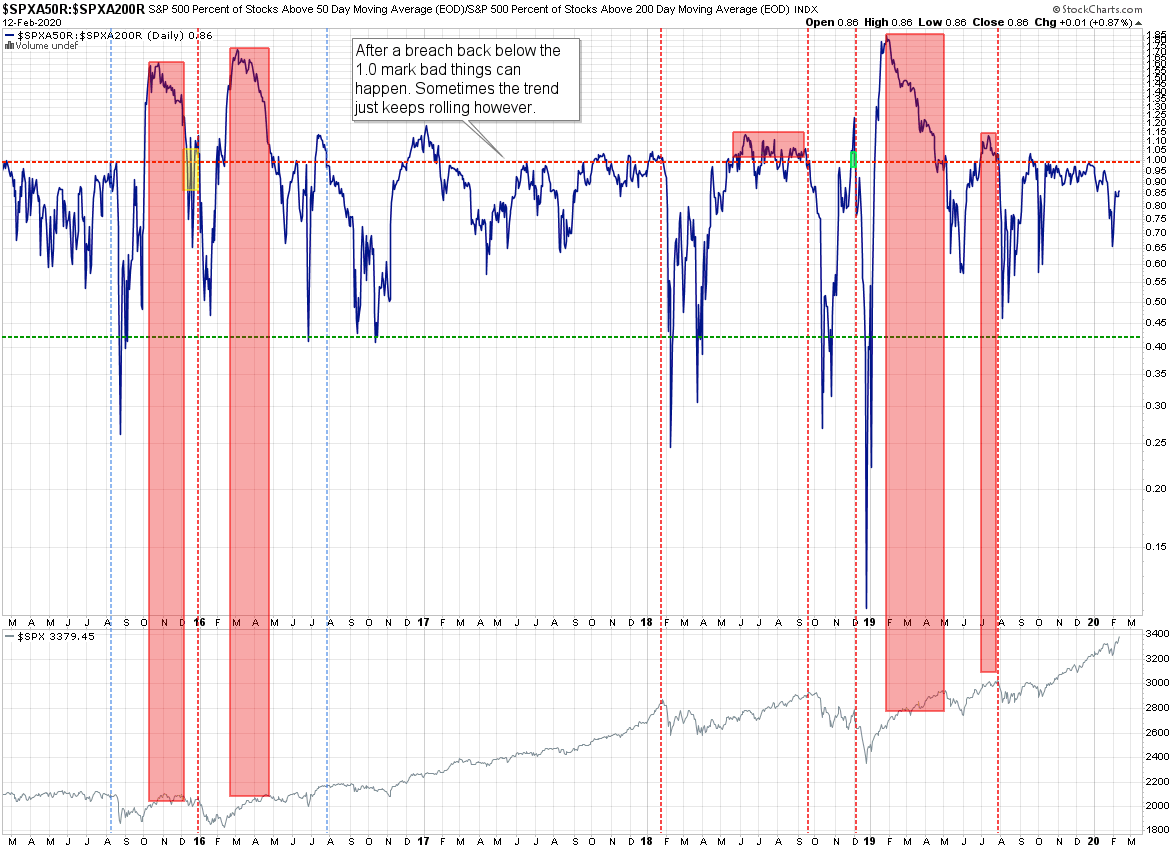 Now I’m not naive enough to completely rule out that the equities market is in a bubble right now. However I fail to see convincing evidence. The other day I caught some tweet that most of the gains in the SPX were mainly due to just four companies: Microsoft, Amazon, Google, and Apple.

Trump tweeted the initials of those four which launched an avalanche of clickbait all across partisan waterholes. However my market breadth chart above has SPXA50:SPXA200 at around 0.85, which suggests that it’s slightly elevated and not massively extended as it was for example around the same time last year (which eventually triggered a sideways corrective period). 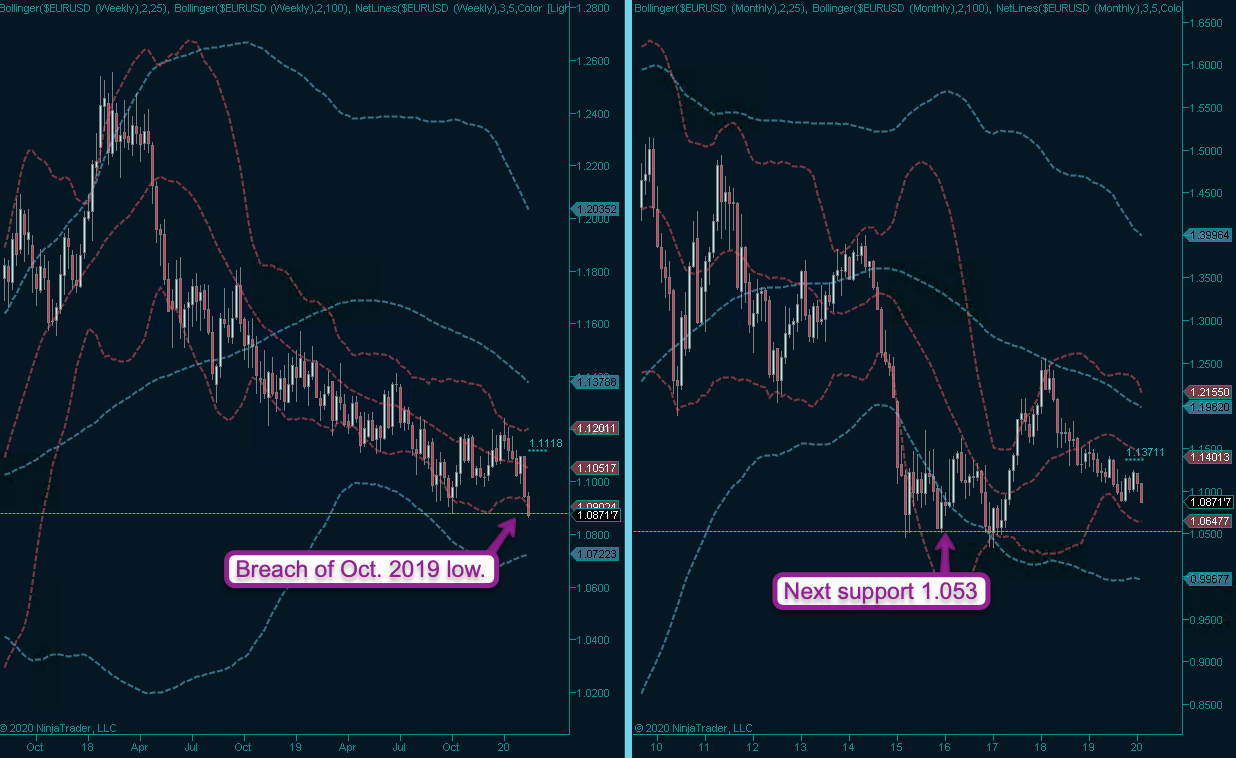 How long this economic freight train can continue like this is anyone’s guess. What I can tell you is that things are looking a lot less rosy over here in Europe. The EUR/USD was sent down to fresh LT lows yesterday as the eurozone reported industrial weakness.

Industrial production in the eurozone once again slumped, coming in at just 2.1% MoM in December to leave YoY output down 4.1%. And given the headlines I’m seeing coming out of Germany I have an inkling it’s going to get a lot worse before it gets better again. 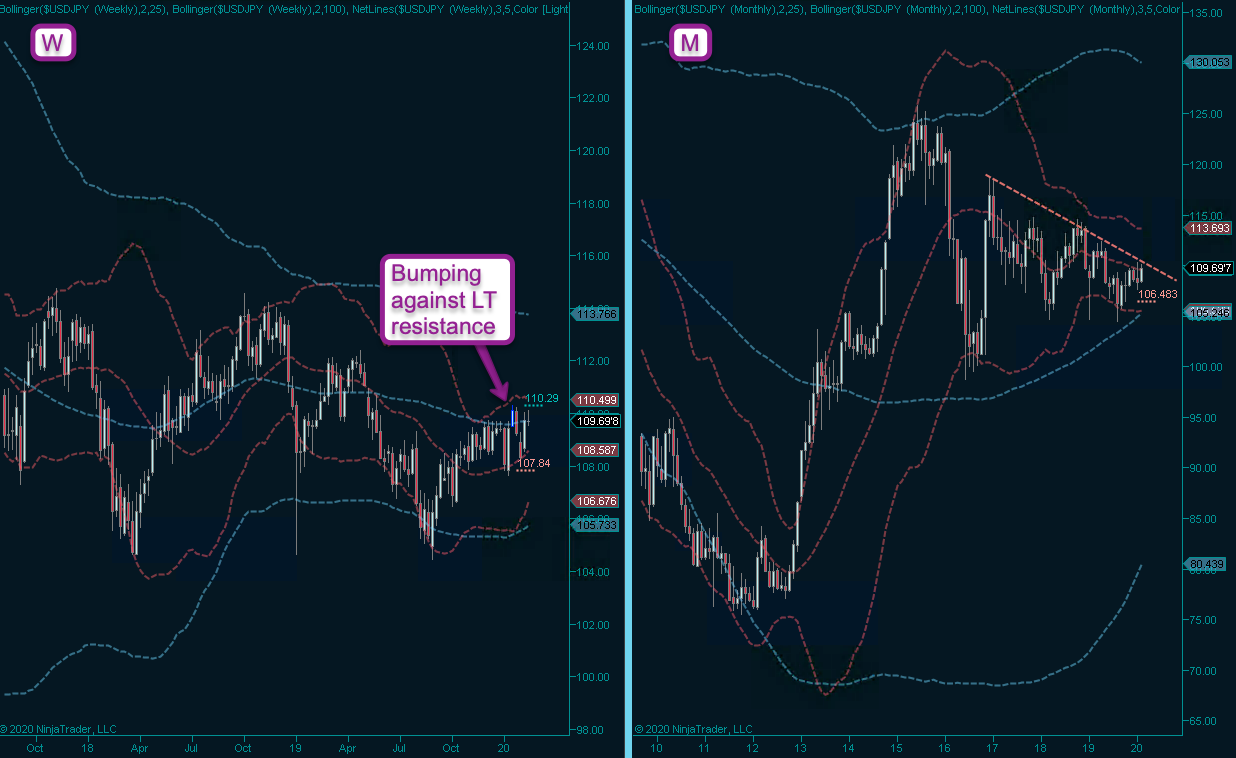 Here’s a snapshot of my LT panels showing the USD/JPY. It’s been curling sideways for half a decade now but the recent push higher puts it very close to LT resistance which now looms around 110.

If wee see a pop higher here it could release a lot of pent up energy, which incidentally may also put a damper on the current bullish exuberance exhibited by the gold bugs. 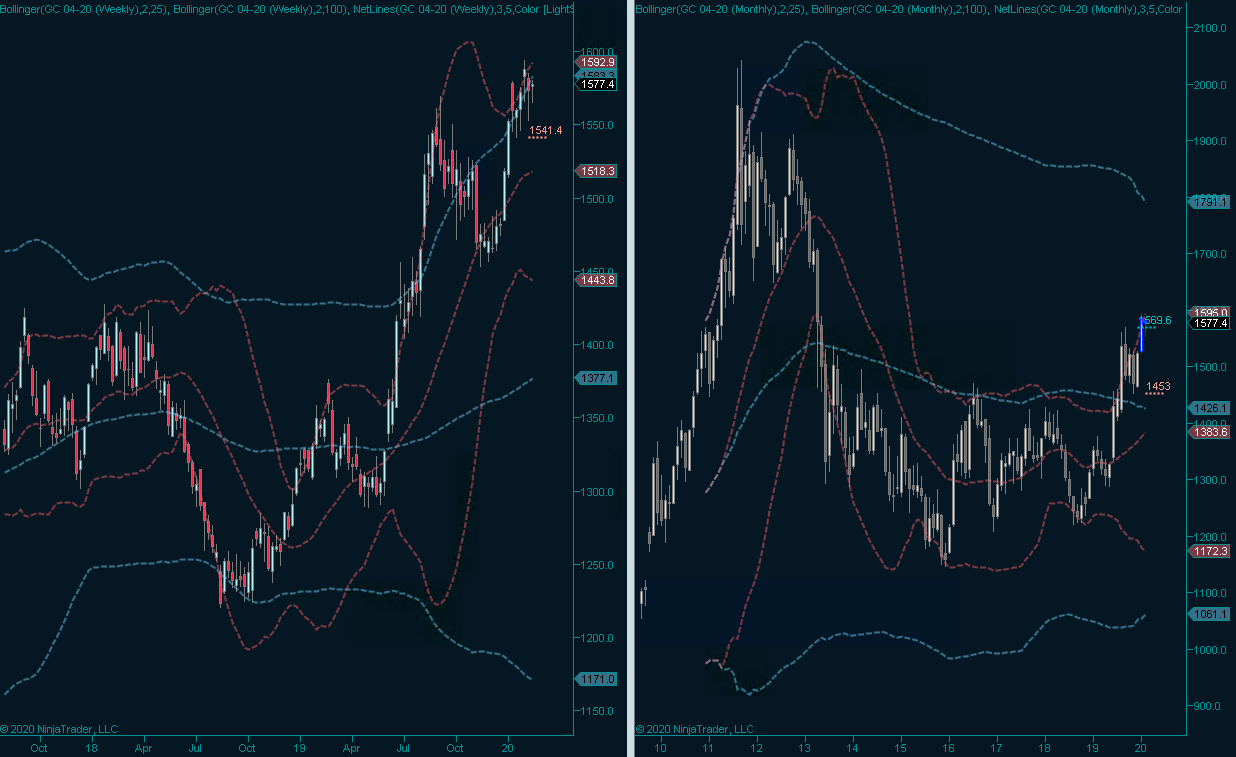 That said – this is one of the most bullish charts I have seen outside of equities. If the YEN drops lower it’s quite possible that we see a revisit of the 1500 mark but I would consider it a prime buying opportunity. It’s quite rare to see gold move in tandem with the Dollar, bitcoin, and the stock market. We clearly live in interesting times… 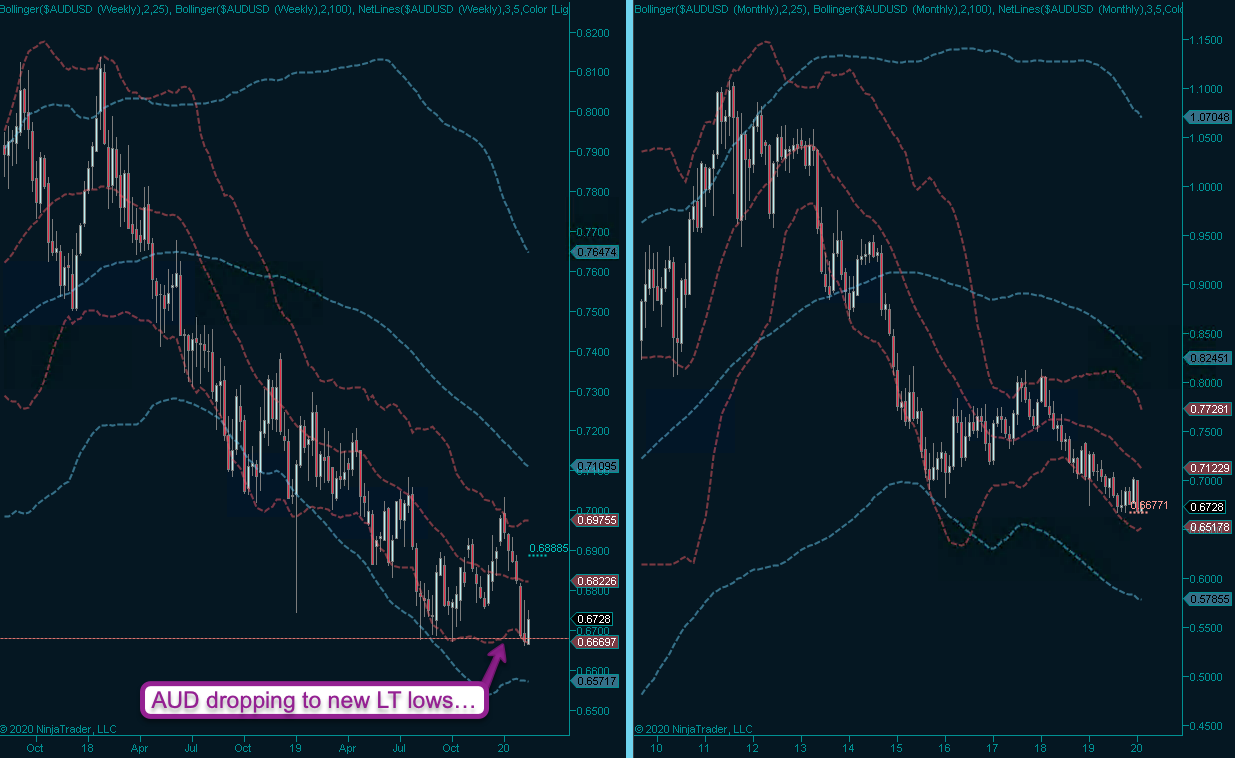 Finally the AUD which apparently couldn’t get a bid at Guantanamo holding a fistful of pardons. That’s a long term chart so it’s been a slow painful progression lower over the better part of the past decade.

Last week the weekly dipped below its 2019 lows and then recoiled higher. Another drop lower would pretty much put it in the express elevator heading for the abyss as there’s nothing but air below, as clearly shown by the monthly panel.

Despite all doomsayers over the past few years King Dollar rules them all. Which as you may recall I’ve been predicting for several years now. I hope you listened.