Don’t Believe Anything You Read 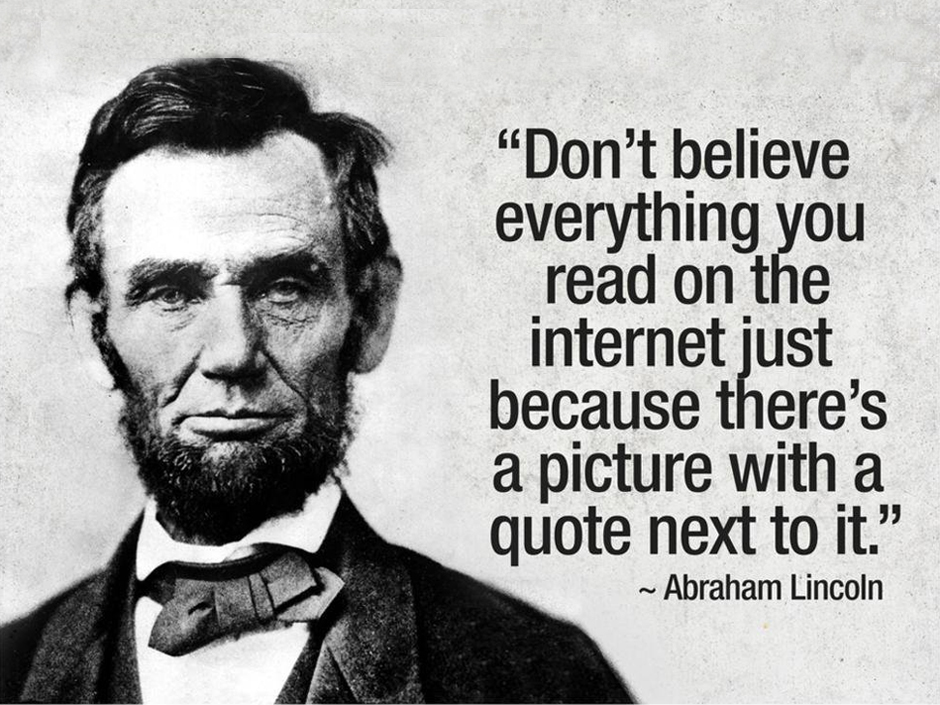 Well, if you’re still reading this then you are either very bad at following instructions or you are giving me way more credit than I deserve. But heck, since I have your attention let me try to get a point across that seems to have been completely lost given the onslaught of crisis pørn we are being force-fed on a daily basis.

Simply put, Western societies have become addicted to a state of crisis, and in the process our average 21st century contemporaries have developed a deeply nihilistic and self destructive perspective on almost all things we once held dear. Which in turn has lured a class of technocratic self serving politicians into blindly embracing highly questionable and short sighted policies with potentially horrific long term consequences – in the process transforming what formerly used to be functioning communities, functioning industries, functioning economies, and in particular any functioning political process into what now amounts to little more than a ticking time bomb.

Everything is pure drama now, and in the age of click bait of course there never can be enough of it. I sometimes envision myself of borrowing Stewie’s time machine just for a day to bring back some of our nation’s founders, just to see what they’d say about our state of affairs today. And after having been called Nazis or fascists I have an inkling they’d probably recommend us to sandblast it all and then to start from scratch. I mean what a bloody mess we have created for ourselves, and you probably couldn’t screw things up any better if you tried.

The mainstream media throughout all this has completely failed its mandate as acting as the fourth pillar of democracy. And even worse it seems to be enjoying its newly adopted policy of eagerly fueling the fires of controversy and chaos, of course when it’s not busy covering up serious issues that should be addressed objectively out in the open.

Since the 2008 financial crisis not a day goes by when I do not come across some report of impending doom and gloom whilst pointing fingers at a newly chosen culprit followed by another the very next day. Such practice has apparently become the modus operandi of the 21st century – to expect total and utter annihilation just around the corner and living one’s life in accordance. Which may explain our falling birth rates and the general pessimistic outlook I keep seeing wherever I dare to look.

It’s either that or I’m just getting too damn old.

Enough with the ranting, let’s talk business. I’m trying to find a juicy setup right now but saying that the pickings are slim would be an exaggeration right now. What’s not already in squeeze mode is running in cycles and I hate feeling as if I have to fill some sort of quota when it comes to picking campaigns. But if you’re a sub rest assured that it’s not due to a lack of trying 😉 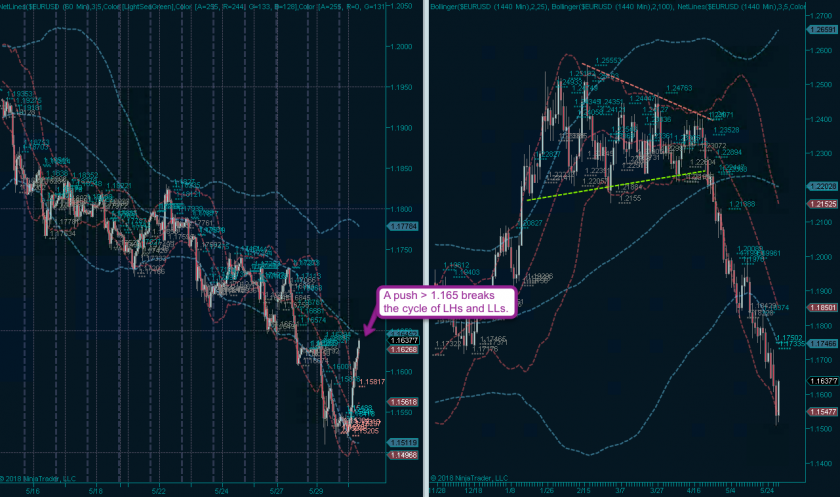 It’s all about the fate of the European Union right now and if for some reason you don’t get your daily fill of drama living stateside then I strongly urge you to come and live over here for a few months. Don’t get me started because otherwise this post won’t be done before the closing bell.

Anyway, the EUR/USD has been enjoying an extended visit at the woodshed over the past few weeks and given bearish sentiment all across it’s time to look for a bounce (as much as I hate to see it). That series of white candles on the ST panel may be the beginning of a little short squeeze due to profit taking.

For it to get any legs however we need to see a breach > 1.165 mark which would break the current sequence of lower highs and lower lows. I’m not long here yet (and may have missed the opportunity) but if it dips back down for a little retest I may look for an entry opportunity. Will keep you posted on this one. 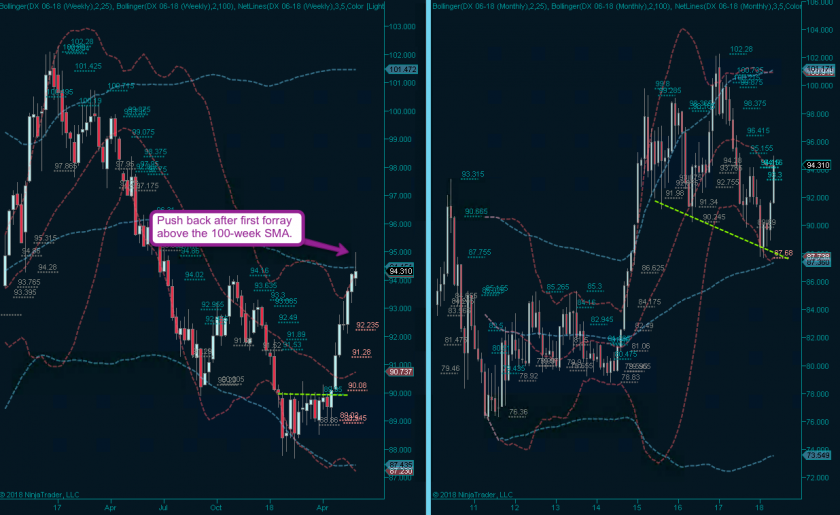 Here’s a view on the long term dollar panels and as expected there has been pushback after a first foray into bullish territory > 94.5. If you recall that is where I expected some pushback so this comes to no big surprise.

Clearly al lot of what’s going on is driven by the political chaos over here in Europe and there’s no predicting where we head next. I am not a fundamental trader and although I do believe in bias given a particular financial policy or political climate I don’t want to start basing my entries on whatever may be cooked up by Draghi and his crew in response to the current political power struggle in Italy.

What i do know is that a bit of consolidation here is natural and that a push > the new highs of DX 95 would trigger a short squeeze of biblical proportions. I already rode a good part of the first one leg earlier this month and I hope to get a seat on the bus should we get another. Again, I will keep you posted on the situation.

More market musings below the fold: