I know you guys live for the drama but I personally only care about banking coin. There are difficult days and there are impossible times to be in the market – FOMC announcement days fall definitely in the latter category. How about easy days? Yeah, we should be so lucky! 😉

In any case, let’s not get emotional here – let’s leave that for the suckers on the other side of our trades. But Mole! ZeroEdge just reported on impending mayhem and the onset of Sodom and Gomorrah like conditions on trading floors worldwide!

Yes, maybe – even a stopped clock is right twice a day. Besides whatever announcement just came out of the FOMC is ancient news to anyone with more than a $5000 trading account over at Interactive Brokers. Yawn – let’s consult our charts – shall we?

The spoos – on the hourly we see a nice downside candle and it’s unclear whether or not we’ll bounce back above the 100-hour SMA. 1400 thus far has been holding. No, I can’t promise that it will but until it breaks we should expect some support there. Look at the daily – we have a NLSL at 1395.75 and we haven’t even touched that one yet. Wake me up when we do. 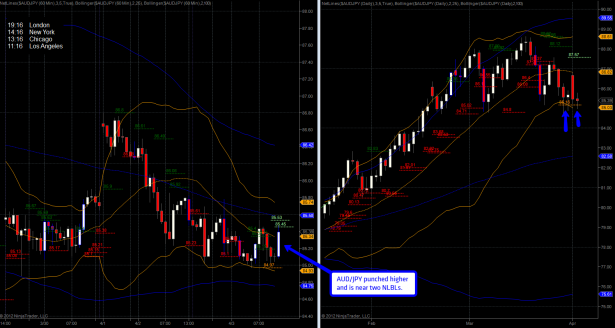 AUD/JPY – actually bounced higher while the spoos were flushing down the toilet bowl. We just touched the first NLBL on the hourly and if we push above 85.58 we should see lift off. If we drop lower I still think that 85.16 should pose resistance – a breach has failed four times already. Anyway, keep an eye on this one. 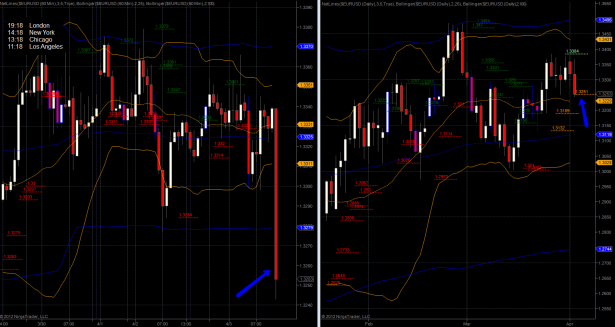 EUR/USD – more reflective of what’s going on in equities right now. WAY outside both hourly Bollingers but we held at the daily 1.3251 NLSL. Below we have the 25-day SMA offering additional support and if that fails we have the 100-day SMA at 1.3119. All that support has been holding thus far. Does that mean it can’t be taken out? Of course not – but until it DOES this is nothing but intra-day volatility. 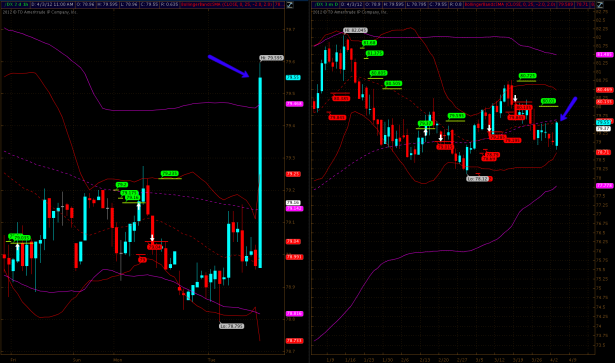 Quick update on the Dollar which IMNSHO is the most exciting chart today. Nice push outside both BBs on the hourly and I expect a bit of a shake out right now to shake out some of the Johnny Come Latelies. The daily panel however has us back at those two entangled SMAs. Last kiss goodbye or can this thing get back on the horse? Very important inflection point and I recommend you watch this chart closely.

Keep it frosty – don’t follow your emotions – they are usually wrong.