I really don’t have a central theme today so please forgive me if I simply post a wholesome medley of market musings, updates on previous entries, setups, etc. As usual we start with the spoos which seem to be painting a step down pattern. 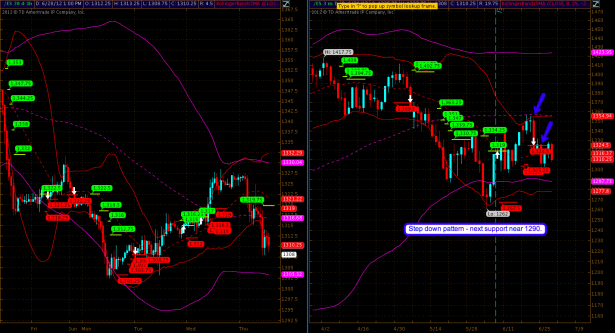 I am not sure if that’s an official term but to me it depicts a slow descend from one resistance/support zone to the next. First it was the 100-day SMA (always a pleasure) – and more recently it was a Net-Line Sell Level (NLSL). Next target zone is around 1288 where we find the bottom of our 100-day Bollinger. 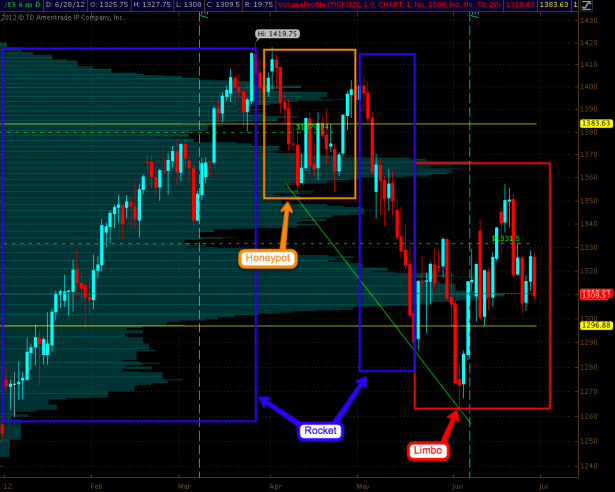 The volume profile chart shows us that this is also where we should be running out of volume to feed the current limbo weather period. Yes, we often get them during summer – what can I say – I don’t make the tape, I just report it. In any case – I recently suggested that we may be painting some inverse H&S here and if that’s the case then the current shake out attempt (i.e. honeypot but I didn’t want to overcomplicate the chart) should not drop below 1300. 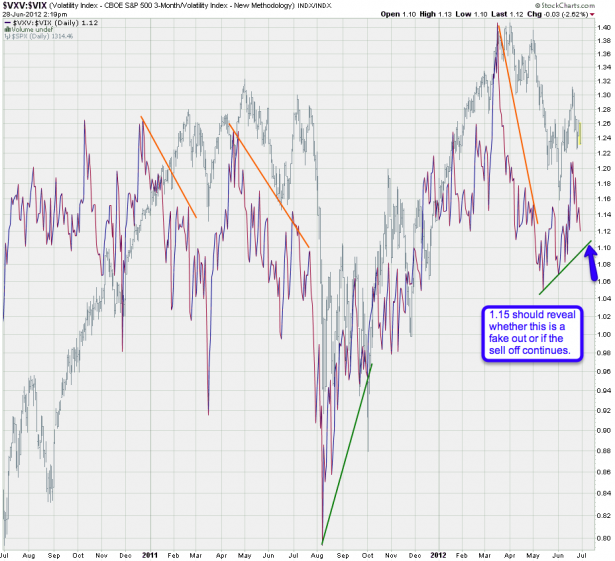 My VIX:VXV ratio chart (i.e. short term vs. three month volatility) has been bullishly divergent for the past month or so. The 1.15 is where we should see another bounce. If not then I expect further downside.

Someone asked me the other day how to deal with inside day fake outs – you know where you for instance get a sell signal breach, which goes for a few ticks/pips and then pops the other way. Rather simple – you haplessly take the first entry and immediately set your stops a few ticks/pips away (based on your own stop and capital commitment guidelines) and if get stopped out you wait and do nothing. If it drops below again then you take the entry – AGAIN. If it goes the other way then you simply wait your turn (i.e. until you get a top breach) and then go long with a stop below the entry line. And if it does it to you again then you wait for a third term. If the bugger stops you out three times then walk away as it’s simply not a good setup. They should usually hit and hit hard (you will see an example below). 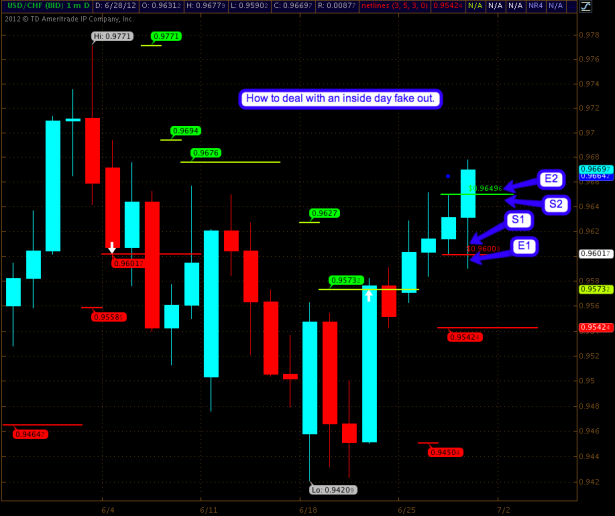 In any case here is yesterday’s entry of the USD/CHF – a clear inside day + NR4 setup. Except that we got faked out first after which she popped the other way. Look – there’s nothing wrong with simply taking your stop and walking away. Sometimes a little clue is velocity. If she drops below and immediately pops higher fast then you know that you may just have been taken to the woodshed. However, I don’t recommend taking another entry unless she pushes above the upper entry line. It’s sometimes easy to get whipsawed, depending on the contract, volume, seasonality, etc. There are no easy answers that address tough tape – you’ll have to get a sense on your on that fits only you like a glove. I can only suggest reasonable and time tested approaches – feel free to make them your own. 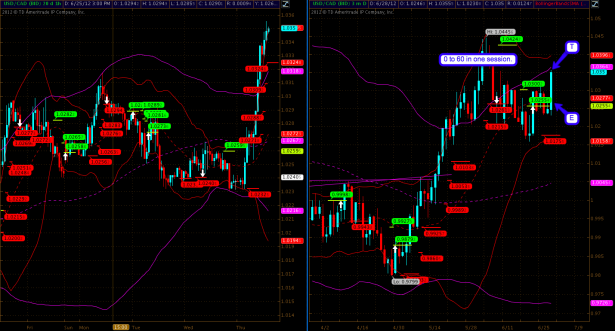 Now here is an example of the one that makes all those stop outs worth the hassle. USD/CAD yesterday also painted an ID+NR4 setup which I pimped to my intrepid subs. What a nice candle and I would start scaling out right now as you usually see a counter response – yes, it’s just like in physics. 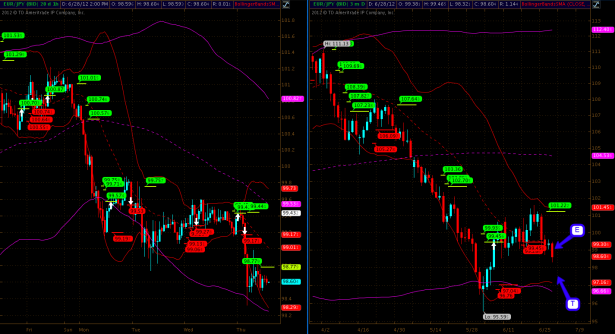 Another ID+NR4 setup on the EUR/JPY which resolved to the downside. So far so good and once she gets moving you can move your stop down a little. 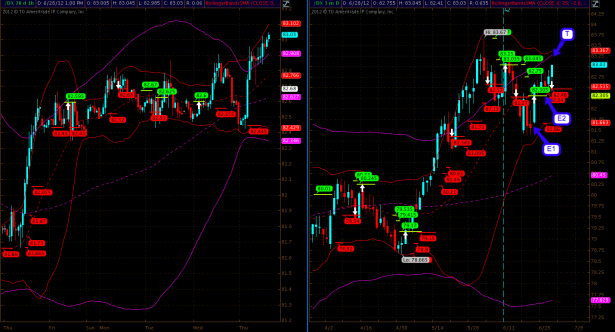 Ole’ bucky actually gave us two entries – one ID candle and one NLBL – a third one if you consider the NLSL retest. Which ever you took – it’s now time to start taking profits. I would however keep one or two contracts in play as my P&F claims a target of ~84.5 – wouldn’t that be nice. 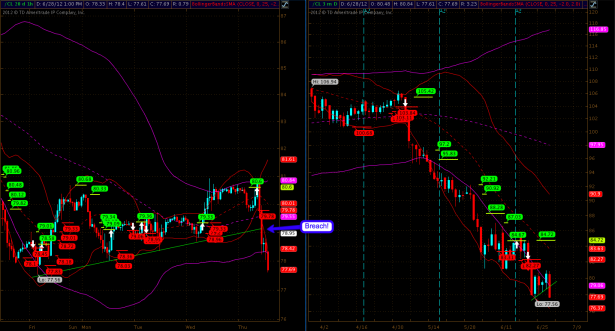 Crude – I sent out an email to my subs this morning suggesting a long setup at that diagonal support line. And yes, I did mention that a breach would turn this into a short trade. Not sure who took that one  but if you are in it – well, there’s nothing for you to do right now – I would simply move my stop slightly above 78. 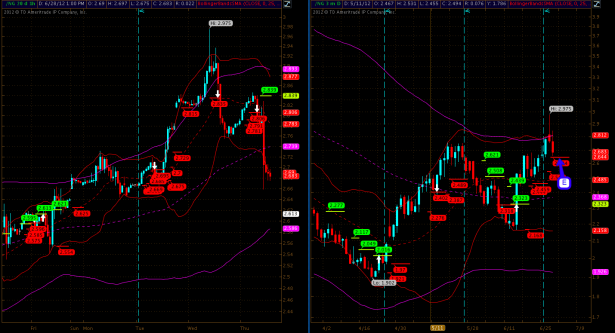 Natgas is a potential new setup which I decided to throw out for free. I would buy that NLSL line until it is broken – at which point it becomes a short trade with a stop above. BTW, similar rules regarding attempts to kick you out of your trade. Often you see a ‘last kiss goodbye’ which may pop above the NLSL and then fall back – of course you have been stopped out by then. I usually set another short entry below after being stopped out just for that potentiality. Again, I do have a limit of how often I get stopped out as it can get expensive quickly. The good trades are usually the easy ones and there is no reason to spend too much time/thought on one damn setup. Simplemente no vale la pena.