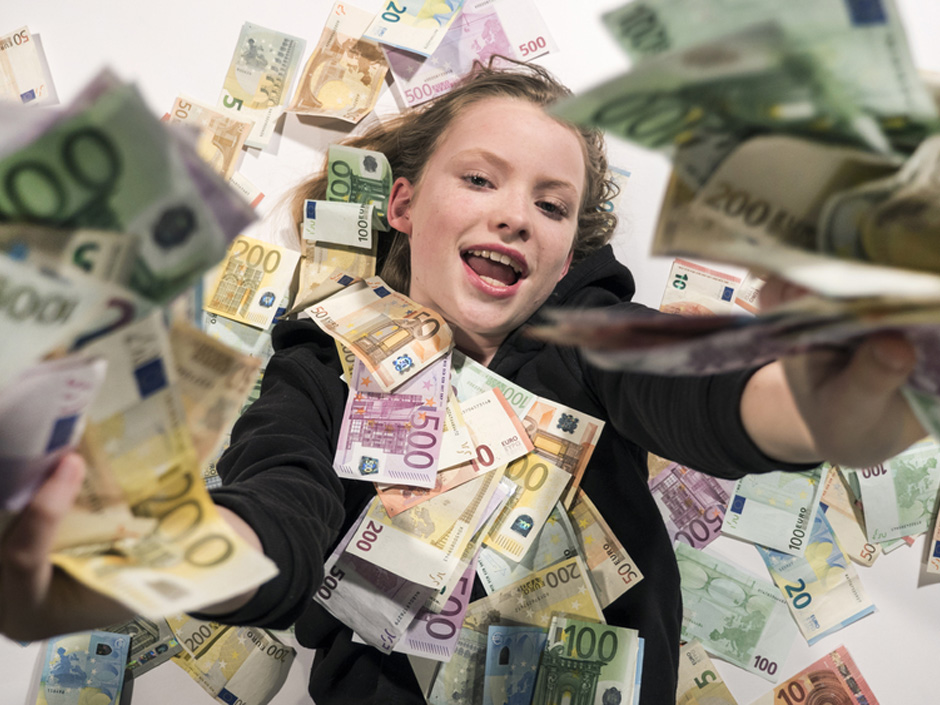 EUR/USD price action over the past few months has been range bound between about 1.155 and 1.175. So we are roughly talking about 200 pips of churn here, which over the summer has created a state of relative equilibrium between Euro bulls and bears. Now tomorrow (Thursday) the ECB is scheduled to announce its interest rate decision and as it is widely-expected to begin whittling down its bond purchases. 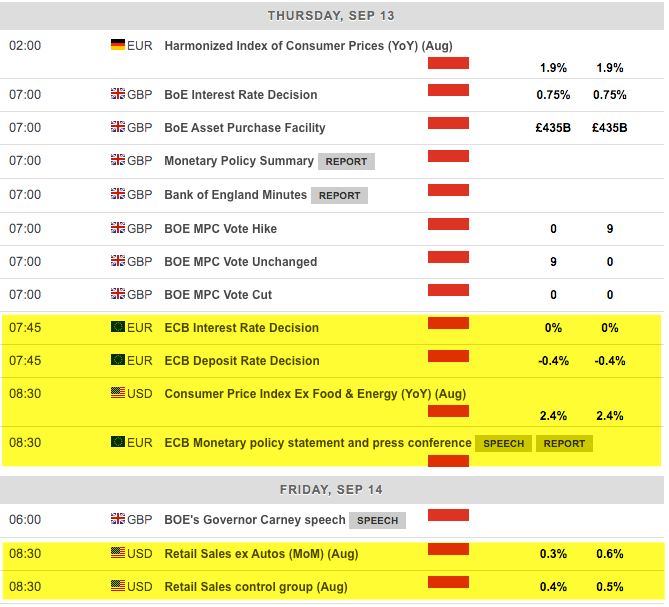 The ECB press conference begins at 8:30 AM EST followed by the US CPI for the month of August just 45 minutes later. Both events combined make for a potentially volatile backdrop in EUR/USD as economic drivers from both sides of the atlantic will be in the spotlight near the open of the Thursday trading session. 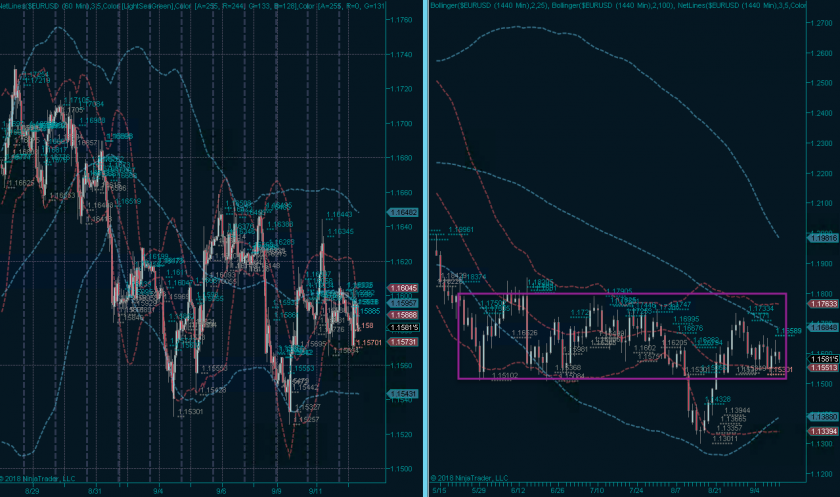 The daily panel shown on the right does a good job of showing us the churn of the past few months. Not surprisingly the first stab lower was quickly bought back and as the daily Bollingers now are in the process of converging a final resolution is drawing nigh. 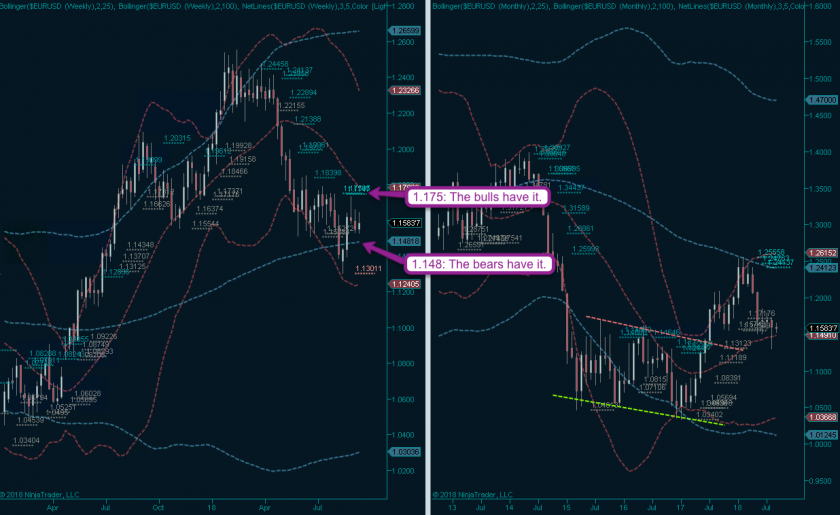 No matter what volatility we’ll see tomorrow the key ranges IMNSHO are 1.175 on the bullish and 1.148 on the bearish side – give or take a few pips. Or is it pippis in Europe? 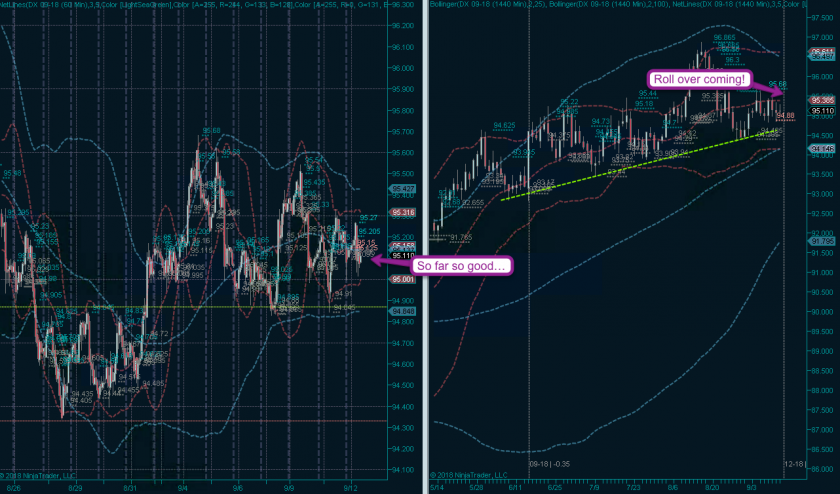 On the Dollar side things have been range bound as well but with a rising bias. I took out a long campaign on the DX last week and was hoping to be able to advance to break/even before the ECB announcement. Which obviously didn’t happen but I would nevertheless usually stick with my guns.

However the DX roll over is about to happen and I’ll have to close this position out anyway. So my decision here is to advance my stop to break/even and if it hasn’t been touched by tonight I’ll close it out manually. Whether or not a re-entry is in order will be decided post ECB announcement. 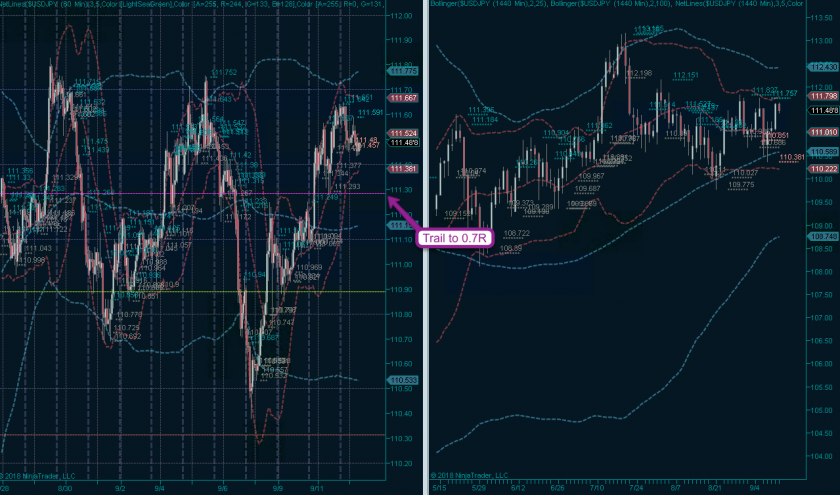 What I will keep holding however is my USD/JPY position which is once again in the green – trail now goes to ~0.7R 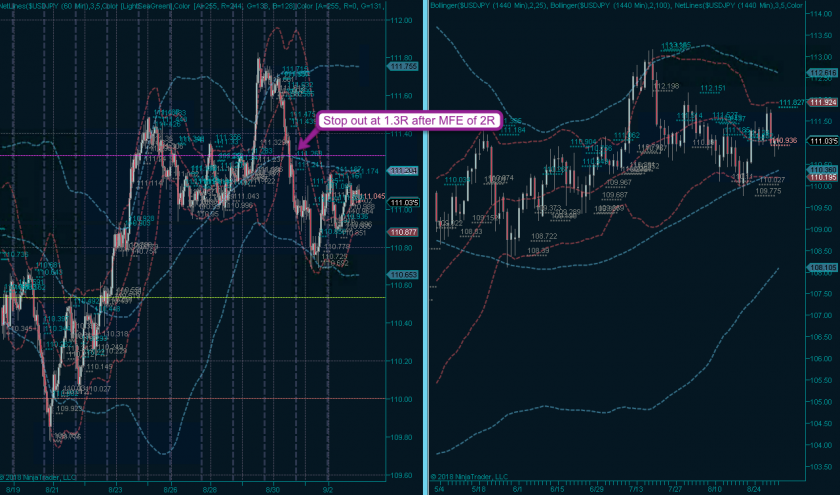 Not sure if you recall but we actually took almost the same entry a bit over a week ago and it worked out very well for us. Let’s hope our streak continues 😉 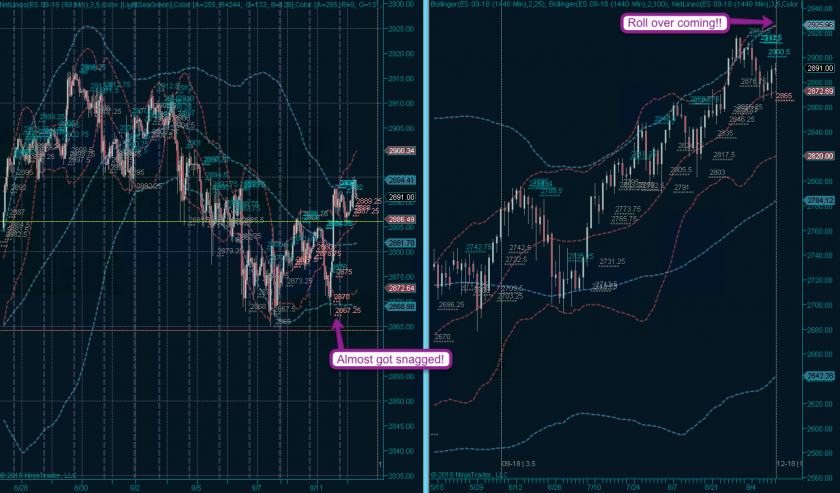 Here’s the E-Mini. I really hope you subs were at least as lucky as me and didn’t get stop swept or perhaps even managed to secure a lower entry. It’s looking solid now but of course a lot can happen between today and tomorrow.

Remember that this one is rolling over as well and we’ll have to advance to the December 2018 contract now. I personally will do the same here as I’ve suggested for the DX futures campaign above. 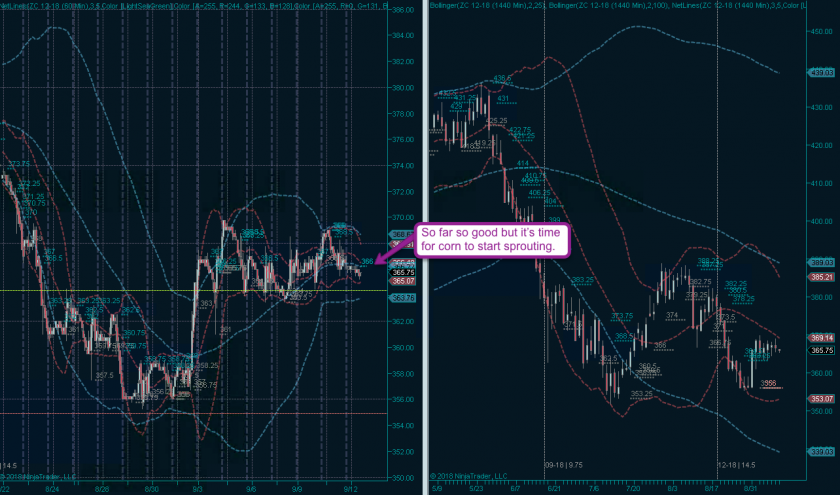 Corn is looking like it’s finally ready to make a run for it. Quite frankly it’s make or break time here, otherwise the bearish trend will once more make itself felt. Judging by the pinched Bollingers on the hourly panel, resolution of this coiling pattern should be right around the corner.