I must be among a small handful of clueless contemporaries who had been blissfully unaware of the existence of the Youtube blogger PewDiePie, a Swedish millenial who apparently amassed over 50 Million subscribers and raked in over $7 Million a year in ad revenues. My first thought was that I must be doing something horribly wrong or that I may be in the wrong business. So just as I was getting all oiled up to deliver my first shirtless videocast I became aware of what all the hubbub had been about and thus quickly changed my mind.

Namely that the kid had apparently dropped some lame anti-semitic jokes over the past few weeks, shortly after which of course his corporate sponsors (primarily YHOO) recoiled in horror and then proceeded to pull his ongoing contracts. Now as I’m German by birth I’m not even going to touch this one with a ten foot pole. Besides the point of all this is not PewDiePie or the blogging racket in general. Frankly I couldn’t give a rat’s rectum about the kid as I simply do not see the value in following the mental masturbations of some Swedish millenial with the collective life experience of a housefly. Maybe if you’re 16 and female I can understand the attraction but this old dog is much better off coiling up next to a fire with a good book.

The big lesson learned for me once again however is that drama, sensationalism, and clickbait have become the modus operandi of our time. It’s all around us at every waking moment. All it takes for you to see it is to simply watch the people around you. I challenge you to find a person under 20 who manages to not look at his/her mobile phone for more than ten minutes at max. It’s become a collective addiction and the problem are not the devices in itself but the instant access to a constant flood of ephemeral and completely useless information. Much of it is cleverly packaged as news but more often than not the masks have long come off, as the name of the game now appears to be to create as much controversy as possible in order to generate the maximum impact on social media and related channels.

What is lost in the process apparently are any sense of decorum, integrity, or moral values. Everything goes and nothing matters. And of course despite all rumors to the contrary personal privacy has long been abandoned in favor or attention whoring and virtue signaling. I sometimes feel blessed that I was born into a time when you still could grow up as a kid hearing yourself think. When you were still given sufficient time and opportunity to mature and perhaps develop what was once was cherished as common sense and analytical thinking. The constant hunt for controversy has now created a popular culture in which pushing the envelope and rising above the noise has not only become an art form, but is increasingly hailed as the pinnacle of personal expression and social advancement. And nothing could be further from the truth quite frankly. It’s a mess out there and apparently everyone’s angry as hell about issues we supposedly solved several generations ago.

There is a lot more I could add to this but as this is a trading blog I will leave you with a few words worth consideration in the context of your daily existence as traders as well as human beings. Do you really believe that all this drama is how functioning societies and economies are created and maintained? Does it actually benefit or enrich you on a personal level? Or is it perhaps nothing more than a constant daily onslaught of mental junk that distracts you from many of the crucial global issues we are in the process of facing head-on over the course of the coming decades? Ask yourself this: How much time have I spent on social media over the past year? 100 hours? 1000 hours? Perhaps more? Wouldn’t all this time be better spent learning a language, reading a book, attending a seminar, working out, or meditating? Are you doing yourself a favor by feeding that inner beast that only seems to be growing with each additional controversy and crisis?

Perhaps take a few minutes this weekend to meditate on these questions and whether or not you may have become addicted to a constant trickle of drama. It’s not officially considered a cognitive bias but if nothing else it’s distracting as fuck and as such should be avoided in order to free up mental processing power to maintain mental discipline, a sense of inner peace, and of course to devote more time to proper trading activities. If you find yourself in the enviable position of being idle, resist the temptation and perhaps simply do what we used to do back in my days: Enjoy the silence. 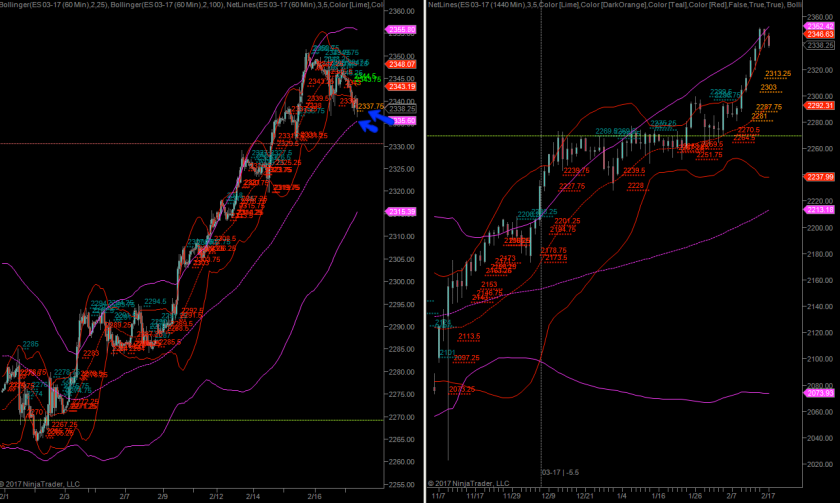 Alright we have only our E-Mini in the running right now which seems to be holding that 100-hour SMA at least for now. Our trailing stop is a few handles below and I consider it well placed, especially given that we’re at least 4R in the plus already and may be adding a few more if dip buyers can be tempted here. Always remember the trend is your friend until it the end when it bends 😉 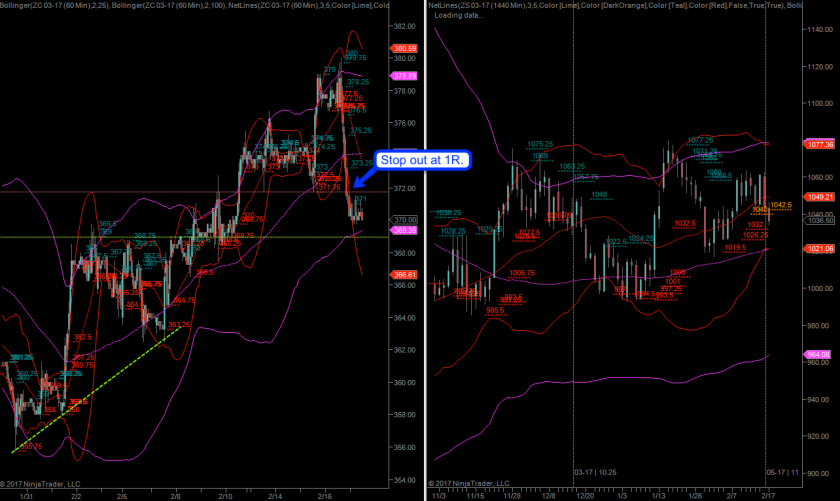 Corn was unceremoniously stopped out at around 1R in profits. Bummer but we grabbed a bit of coin in what has been a volatile period for the grains in general. Can we ask for more? Yes we can but we probably won’t get it. 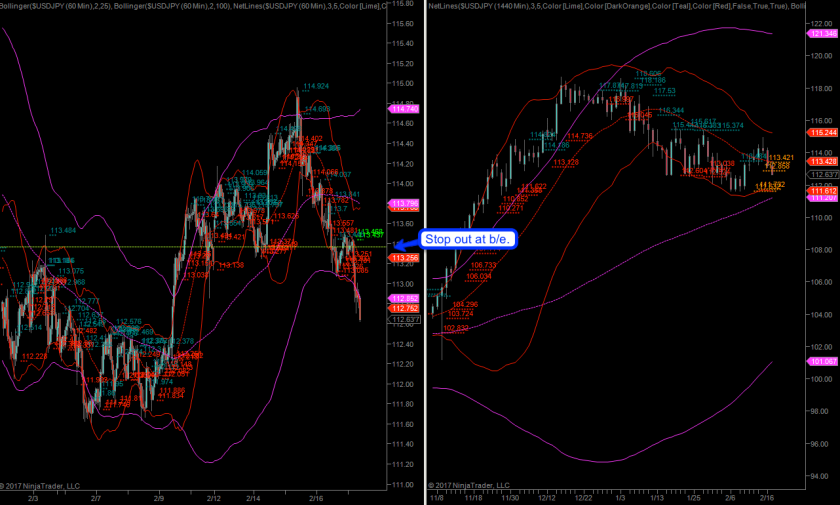 USD/JPY is also out and over – my stop was touched at break/even. What happens moving forward remains to be seen – I would not touch this one in the foreseeable future, at least not until it has managed to touch its 100-day SMA. 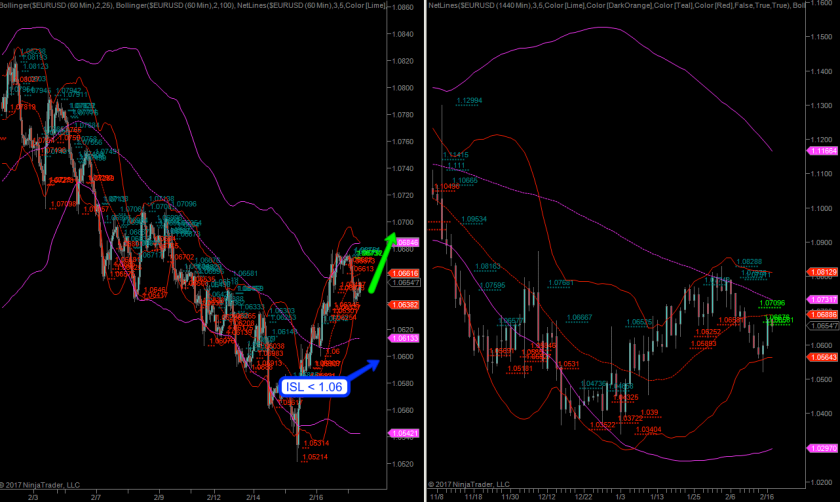 EUR/USD is a very small long position for me here and as you all I know I hate to take it. The chart is however rather clear about the potential of a short squeeze. 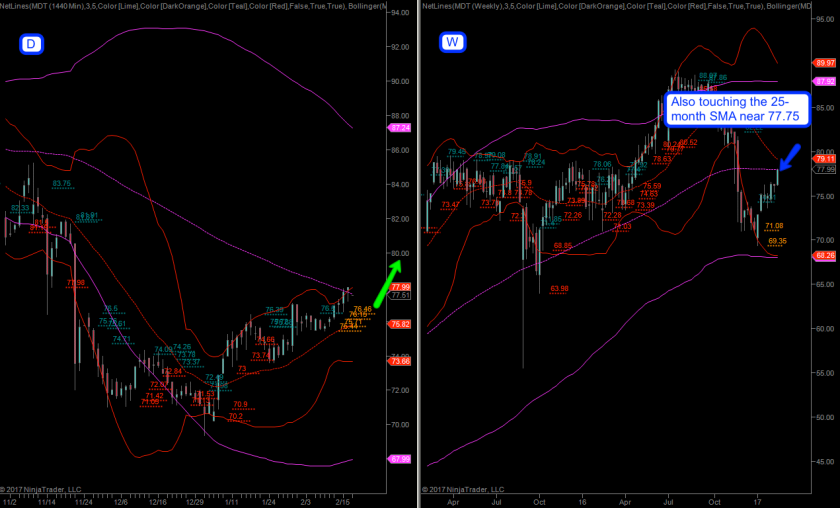 We do have a few stock symbols as well today. MDT may be a long next week if it manages to drop back down for a retest of about 76.50. There is a case to be made for a quick short position right here as it’s touching its 100-week SMA as well as its 25-month SMA (not shown on the chart).

Seasonality courtesy of Financhill – click on the chart or here to look at a dynamic chart plus some juicy stats. As you can see the next few weeks are ambiguous which is another reason why I’m putting this on my watch list for now.