Entries Do Not Matter

From the very first moment fledgling traders look at their first chart they being taught all the exciting things which seem to matter and none of the (somewhat) boring things that really do matter. More often than not there is an almost obsessive focus on trading tools, various indicators du jour, technical analysis in all forms and shapes, trading books/videos, trading seminars what have you. The average trader expends thousands of hard earned Dollars and many available hours on all of those things, and that is before getting their account funded and approved.

If you have visited here then you probably already know that none of this really makes an iota of difference when it comes to placing a successful trade. That doesn’t mean you don’t need to know your stuff – by all means you do need to understand the basic tenets of trading. But more does not equal better – as a matter of fact when you really boil it down to the most basic level all you really need to know is where to place a trade and where to get out. Sounds simple, right? Actually yes and no – it is simple once you know how to do it. Getting there takes years of hard work and quite a lot of practice.

What’s making matters more difficult are certain aphorism you will invariably come across – most of which are actually completely wrong. One of the biggest ones is that entries matter – more specifically known as ‘buy low and sell high’. Well duh – that’s common sense, right? Actually no – it is not. I assure you that entries are the most trivial aspect of a campaign. Your exit is much more important – so is your money/campaign management. There is a lot to doing the latter two properly and we have discussed some aspects of that in the past and we’ll probably be doing it again.

Now, I can literally hear you thinking right now: This is completely bonkers – of course my entries matter, what the hell is he talking about? So, you’re not convinced? Well, I can’t really blame you – after all years and sometimes decades of misinformation and brain washing are difficult to reverse. But there is hope for you (you’re here after all – which is a big step forward) and to put you on the right trail let me prove to you that entries do not matter via a campaign we launched twice in the past few days: 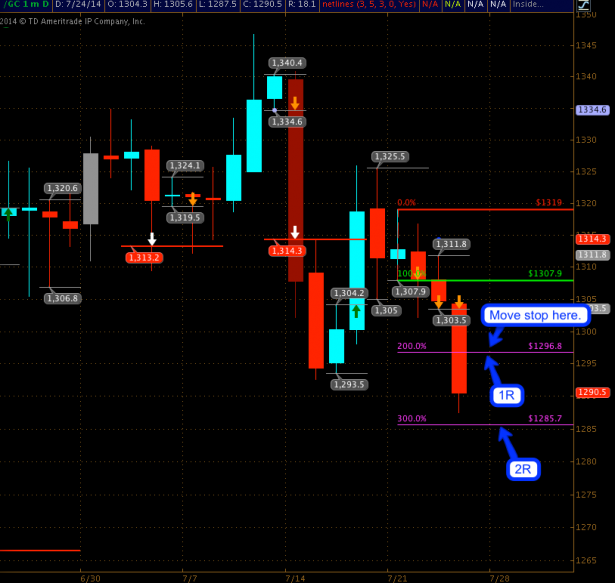 Here’s gold which if you’re a sub you recall I suggested as a very juicy short at the 2x inside day candle. I really wanted this one to resolve to the downside and for once I actually got my wish the next day. Entry at 1307.9, stop at the 1R mark at 1319 and Bob’s your uncle. yesterday it was testing our patience and today it dropped hard and earned us over 1.5R (thus far, the day ain’t over yet). If you took this one then don’t forget to lower your stop to the 1R mark at 1296.8. 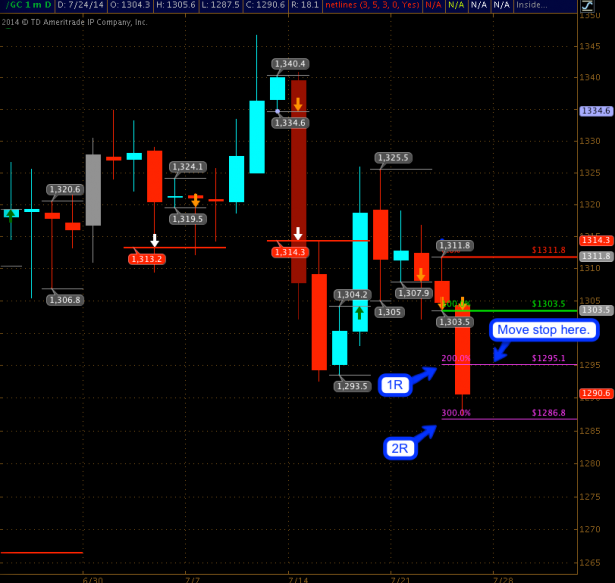 However yesterday that little inside day candle (which tested our patience, remember) presented late comers with a second entry opportunity. Which I sincerely hope you took advantage of for obvious reasons. Now let’s see – that entry was at 1303.5 and the stop, based on the previous candle) was at 1311.8, again representing one R (risk ratio of 1% exposure). And what happened today? It banked 1.5R thus far and once again anyone who took it is advised to lower their stop to the 1R mark at 1295.1.

And there you have it – conclusive proof that entries to not matter. Yes, of course it would matter had you used the same stop but that is context and chart specific – it all depends on your particular lens and how price advances. Another big implicit lesson to be learned about price in general is that it doesn’t matter where it has been – all that matters is where it’s going. Let me repeat that because it is absolutely crucial that you wrap your reptilian brain around this little mind teaser:

It doesn’t matter where price has been – all that matters is where it’s going.

Which by the way also applies to your life in general but let’s not complicate matters by turning philosophical. 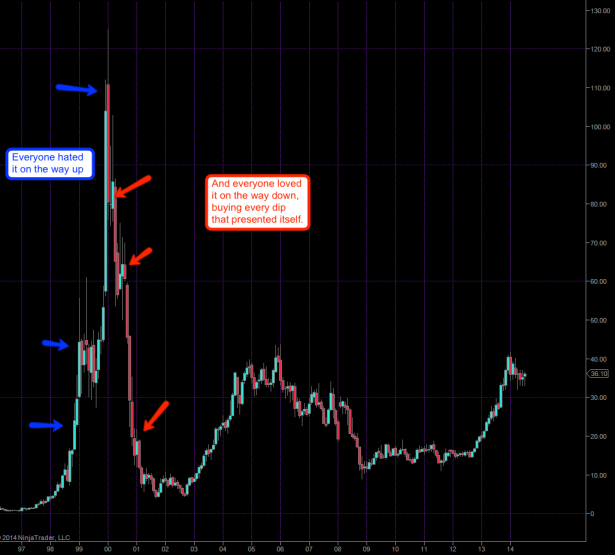 Some of you older dogs may remember Yahoo back in the late 1990s – while it was going up up up it was one of the most hated stocks out there. After all everyone knew that search technology was a trivial business to be in and that any value invested or perceived was all built on smoke and mirrors. Well, they were partially right but that really didn’t help them on the trading front. Many hobby bears got taken to the woodshed week after week attempting to short this thing which obviously went completely exponential all into 2000, pushing from single digits in 2006 to over $120 in 2000.

When it all came crashing down it did the very same move to the downside (in one year I may add – volatility is a bitch on steroids). But what was most remarkable to me was the change in sentiment among the average retail trader who either had been holding YHOO while it was going up or was now considering a steal based on where it had been. The guys who got burned watched it crater week after week constantly thinking that it couldn’t possibly drop any lower, could it? The dip buyers found themselves in their own little hell as they watched it drop from $120 to $100 to $80, $60 – all the way down to single digits again. Of course buying every single dip because after having dropped 20, 30, 40 bucks and more it suddenly was such a great deal now, wasn’t it?

Alright, so just in case I haven’t blown your mind just yet, how about this: Some of the most experienced and time tested trend traders like Bill Eckhard or Ed Seykota, and even the venerable Jesse Livermore actually follow(ed) an inverse approach – buying high and selling low! Yep, you read that right. But that’s a story for a different day 😉

I have only one setup tonight and I’ll have to keep that one for my intrepid subs. But it’s an awesome one, so grab your decoder ring an meet me in my air conditioned luxury lair: