We are taking a glance at the daily chart in order to correlate possible implications in equities.

I was at my bank yesterday; there was a short line. Just one lady in front of me. An Asian lady who was trying to exchange yen for dollars. It was obvious she was a little irritated.. .

She asked the teller, ‘Why it change? Yesterday, I get two hunat dolla fo yen. Today I only get hunat eighty? Why it change?’

The teller shrugged his shoulders and said, ‘Fluctuations.’

The Asian lady says, ‘Fluc you white people too!’

Oh, I kid the Japanese 😉 Although I do have to bite my tongue when I see Japanese officials bribe decision makers about the reversal of the whale hunting ban. Seriously…

Alright, let’s get right to it: 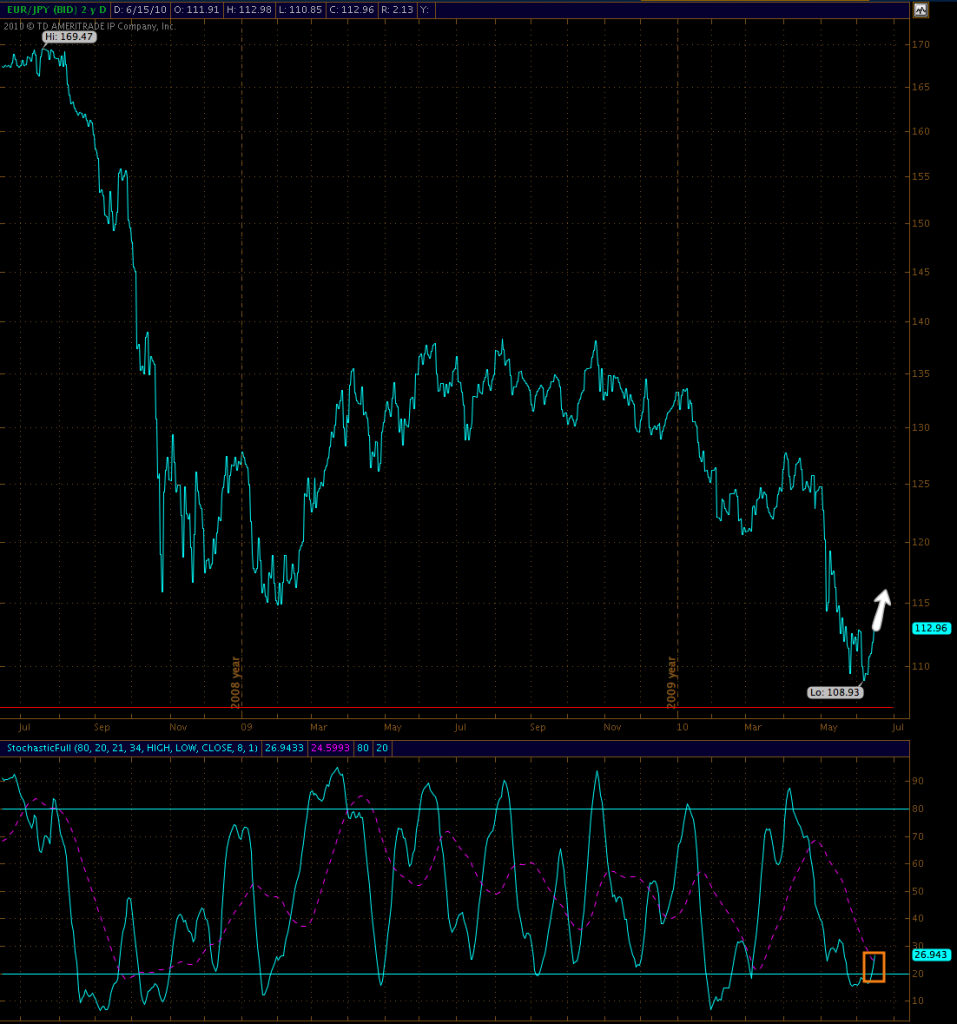 Well, that daily chart does not look too rosy for the bears. While there is no guarantee that we’ll make it all the way up to the 80% mark line on my stochastic chances are we are going to push a little higher here – I’d say 115 and some change minimum. 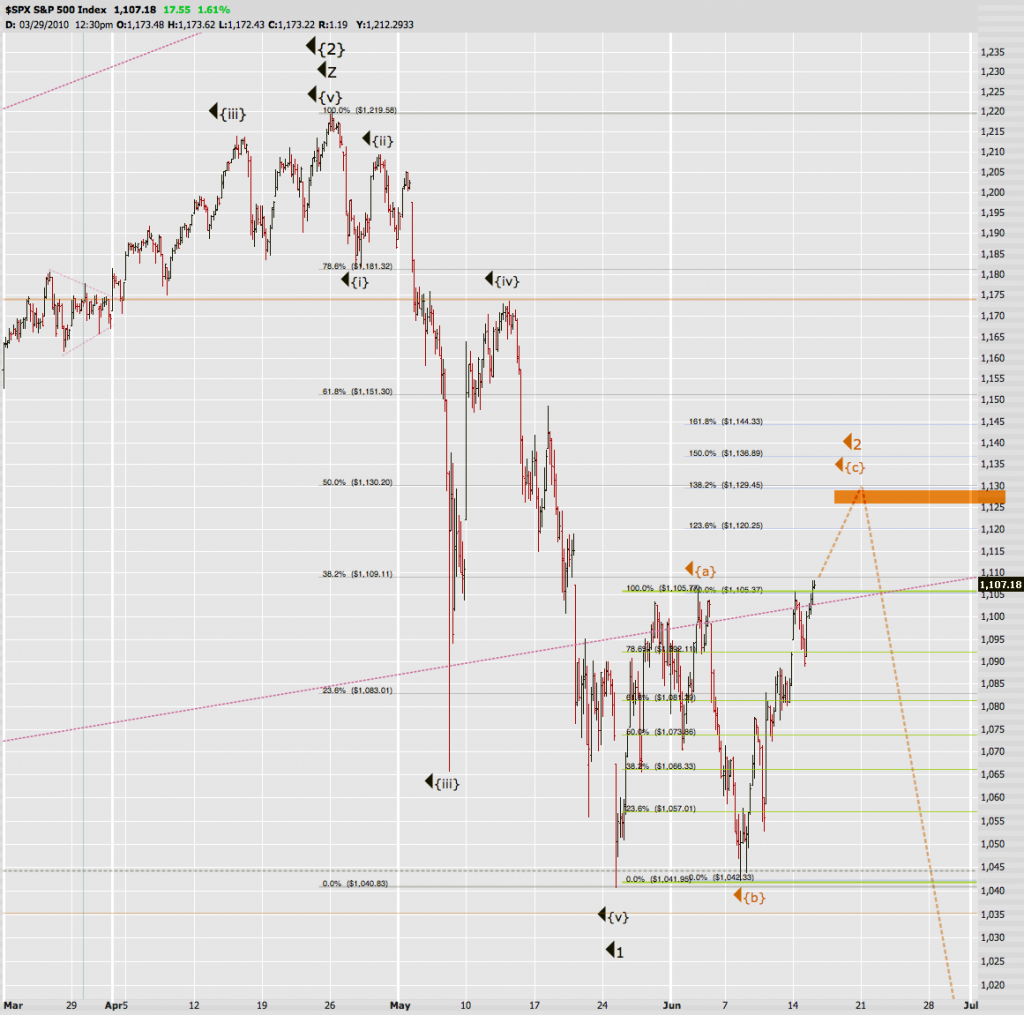 Yes, Son Of Soylent Green turned out to be a stillborn as we breached yesterday’s highs today. For the record – I did not trust yesterday’s down push for a second – I’m sure Zero subscribers remember my comments. We dropped pretty hard and the Zero Lite was barely painting a negative signal. I mentioned that I just could not trust the tape and was not surprised to see the opening gap today. BTW, that is the third time this type of ‘non confirmation pattern’ occurs within the time span of two weeks. I didn’t want to jump to conclusions but three for three is looking like a fractal to me. Anyway, something to keep looking out for in the future – for sure.

So, what’s left is Soylent Orange. How come that if we have a choice between three scenarios the most bullish one usually wins? Tough gig to be a bear – 80% of the time the tape ends up sideways or up – those are the stats my grizzly friends.

I usually don’t count Minute waves intra-day but a possibility here is that we are now in a 5th wave of the C leg of this flat. If we somehow push beyond 1142 then this third wave is sub-dividing and we could go a lot higher.

How high we go is mainly up to the EUR/JPY – so let’s keep watching that. I reckon that the 115 mark on the EUR/JPY would nicely correlate with a 1125 reading on the SPX. No guarantees but a reasonable target at this stage. And yes, we could push much further than that – Minor 2 waves can theoretically correct a significant portion of their prior down wave – just so you know. But let’s all agree not to panic and let at least Soylent Orange unfold as proposed.

FYI – I’m still scanning for good setups (i.e. symbols) but am not finding much I like. Will keep hunting and do a pertinent post if I find anything of interest.

2:25pm EDT: Quick update on the EUR/JPY front – short term we are heavily overbought as a boat load of bear stops have been run. 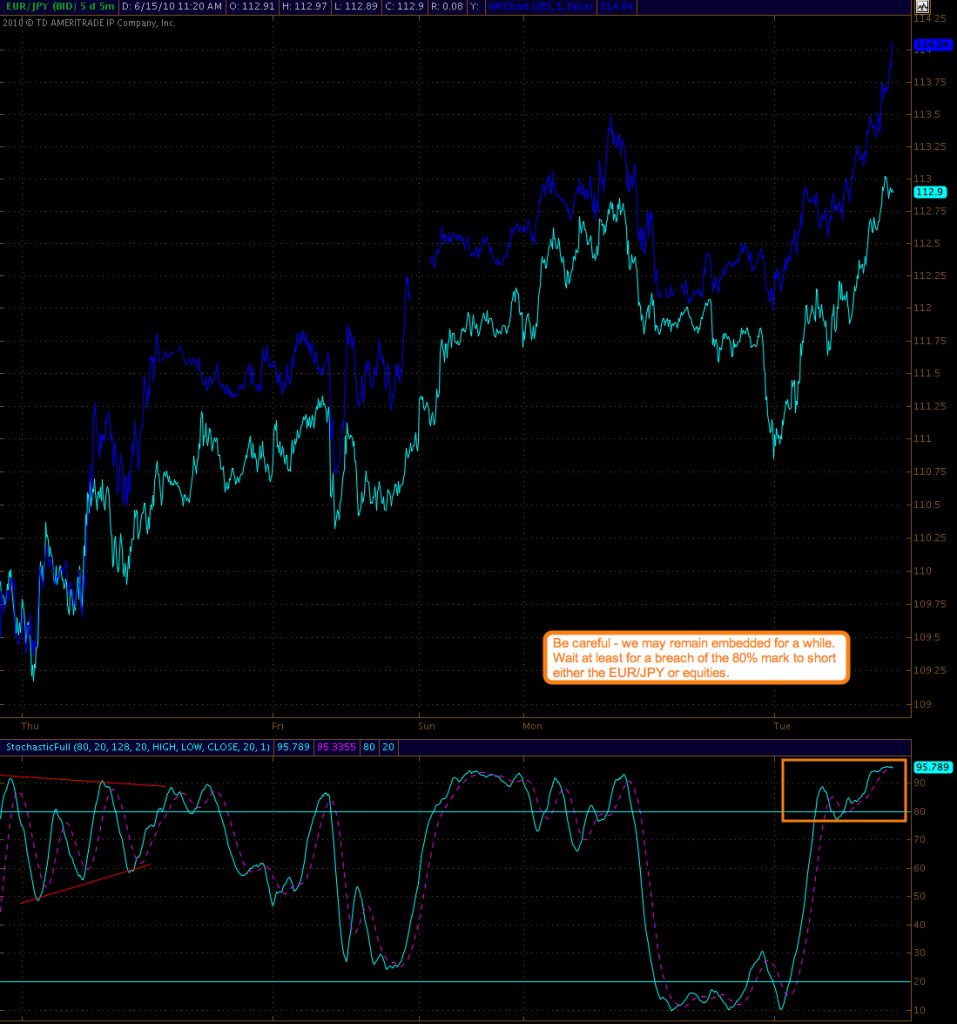 However, I would be extremely careful shorting the tape right here – one reason is the possibility of my stochastic remaining embedded and curling around for a while. If you insist on picking a top then wait for a breach of the 80% mark on this chart.

2:36pm EDT: I just looked at my VIX chart and was stunned by that massive drop in what is unjustifiably being referred to as ‘volatility’: 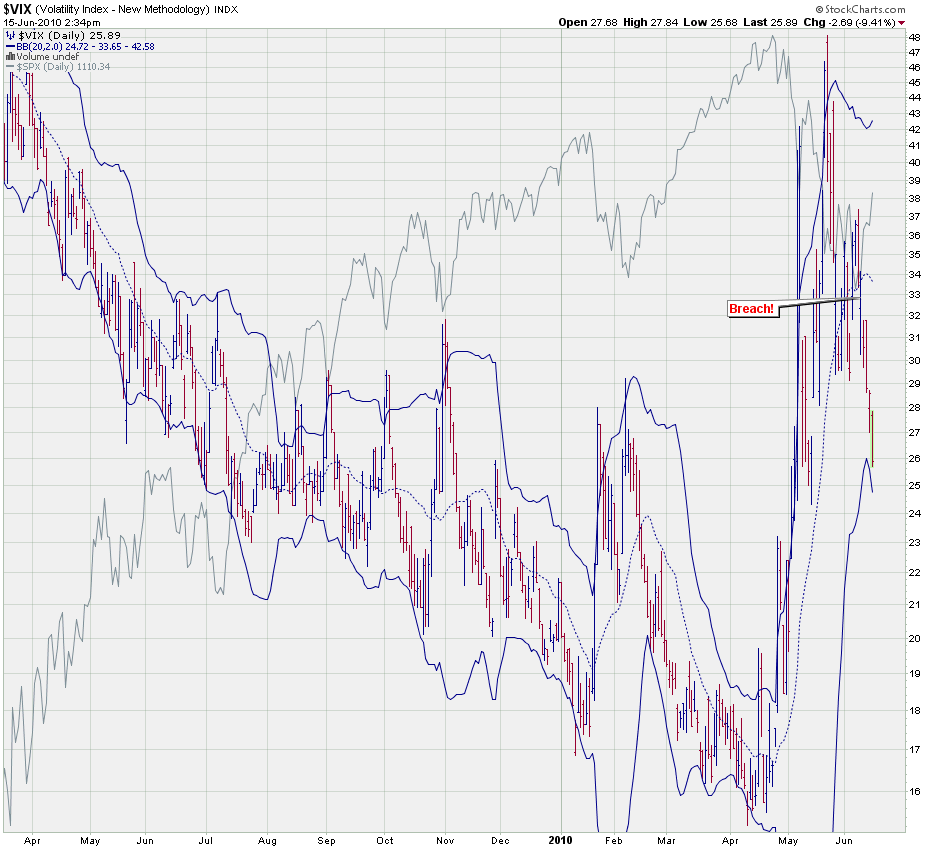 Consider this – a near 50% drop on the VIX in the past month. Is the market less ‘volatile’ or risky than it was a month ago? Obviously not – but if nothing else this is a great ploy to punish short term put holders, especially during OPX week.

I keep telling you guys to think long term – and this is another piece of evidence backing up my position. Either that, or you have to be incredibly nimble in this market and call the tops/bottoms accurately. And that’s tough to do right now – plenty of head fakes. Just a week ago it looked like we wouldn’t make it through that center line. Now we are scraping the bottom of the barrel on that Bollinger. And the way things are lining up I think we could be dropping toward the 23/24 mark here.