This weekend all eyes are once again on the ongoing drama in Cyprus – many editorials are focused on how may (or may not) address a Monday deadline to avoid a banking collapse. I’m certain you all know the story and I won’t waste your time on yet another opinion piece. Let’s just say that I continue to greatly admire the European’s ability to turn a problem into a crisis, and a crisis into a catastrophe. Well played! I’m not being cynical actually – after all this is not ZeroEdge. Well, maybe a little bit. Never forget that there is opportunity in chaos and if you believe that the emotional roller-coaster ride of the past five years has not benefited certain parties then I won’t try to convince you otherwise. 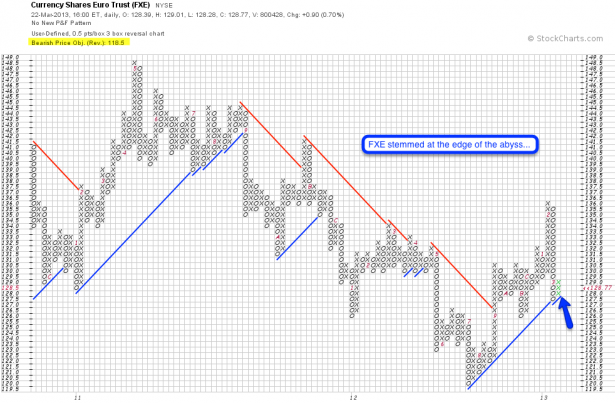 Let’s instead be productive and talk about what we really care about in the context of Europe – which of course is the Euro currency and not a tiny player like Cyprus. Obviously I’m posting this and other pertinent chart knowing that things may quickly escalate by Monday morning, but it’s still crucial to know where our pertinent inflection points are. Above you see our FXE P&F chart – it shows us a bounce right where it should have happened, near the 127.5 mark, which I pointed out as the Euro’s final line of defense several weeks ago.

At this point the bearish price objective of 118.5 is still in play however if we see some type of final resolution by Monday I wouldn’t be surprised to see a push into 131.5 or 132 which would constitue a low flag pole reversal warning and put the bears on notice. Similarly non-resolution may finally take us much lower below the 127.5 mark and beyond. 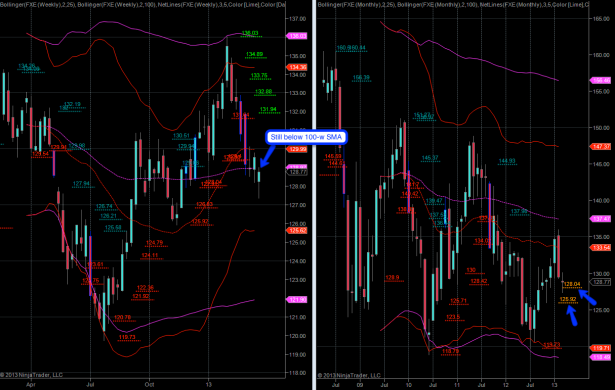 The weekly panel shows us below the 100-week SMA and that’s bearish. A reversal back above would be very bullish as it would represent a failed SMA breach. On the monthly panel we see two NLSLs, the first one of which near 128 has been providing support thus far – a drop below 125 would probably get us toward our P&F target, at least somewhere between 121 – 119 is a possibility until there is some LT support.

Let’s also look at some of the pertinent FX pairs to round out our perspective on everything EUR:

Some Words To The Wise

Once again I suggest that you simply ignore all the noise about Cyprus you will invariably come across this weekend (unless of course you live in a cave). Chances are you are as sick and tired as I am of the constant drama and the never ending debates focused on the damage control du jour over here in Europe and to some extent over on your side of the Atlantic. There is a growing phenomenon that seems to have become an addiction in its own – to constantly expect and even salivate over some possibility of a tragic system failure – that coveted six sigma event that may somehow reset everything. In that respect I must caution everyone to be very careful what you wish for – as you may just get it.

Perhaps this is a subconscious response to an increasing frustration with the Western political and financial classes which are both obviously in rather questionable state these days. But guess what – there’s nothing new under the sun – this game has been played on for a long time now, and we yield very little control to affect its outcome. The one thing that has changed is a rapid explosion in instant communication and a wider playing field for the dissemination of information. And what has not changed is the most fundamental aspect of it all – the inherent nature of man.

The reason why I started Evil Speculator in the first place was to give the little guy a fighting chance in navigating the traps and tribulations involved in trading the markets during a time of (sometimes fabricated) crisis. We do that by focusing on our charts and most definitely not by following the news. Whatever you will learn about Cyprus this weekend will come too late – meaning by the time it reaches your eyes or ears it has long been played by the inside crew. Follow the charts and you may at least be able to ride the coat tails of those invariably positioned to be on the winning side of the tape. As the saying goes – don’t listen to what they say – watch what they do.