Evil is as Evil does…

Gotta respect the evil at play in the markets today.  I walked home with mud in my face, but I am able to trade another day.  It was rough.  I was talking to Mole this morning and mentioned that after the first rally, triggered by the break of the prior $NDX low, there was not enough institutional buying around that level the second time around.  Something just wasn’t right.  They were crafty.  They took a lot of us by surprise, letting 1149 go with ease the second time around, and even letting $INDU 8K break without much struggle.  However, a measly 35 points below 8K, with bears licking their chops and adding puts on the break downs, the black boxes kick in.  And damn did they kick in.  THERE was my institutional buying.  It was quite the kick in the crotch.  However, though I am evil, I can admit defeat when I am out traded.  Today, the black boxes won.  They caught me like a deer in the headlights, but I learned, and we will battle yet again…

As I write, I am chatting with Mole, and I will show you something I noticed that is SCREWED up. 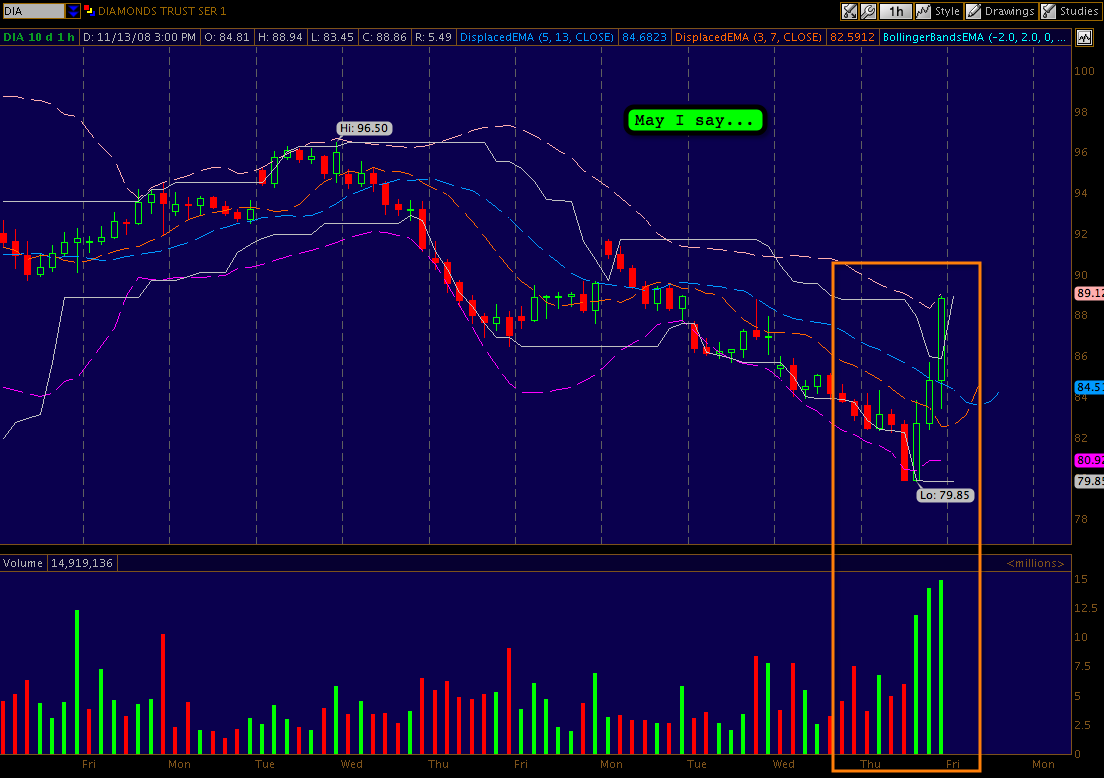 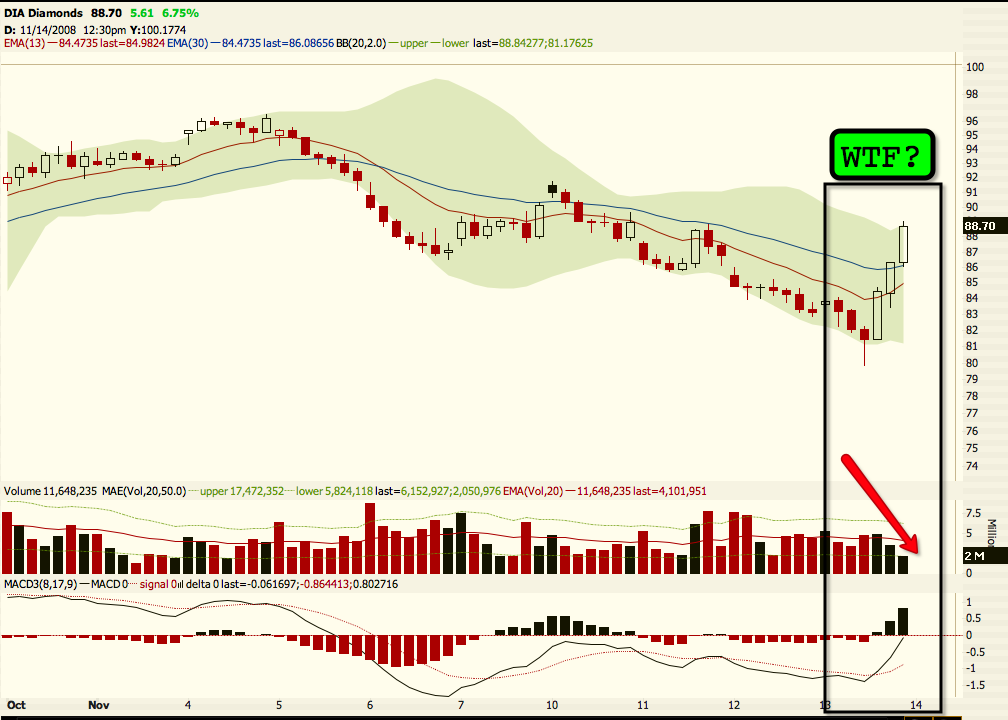 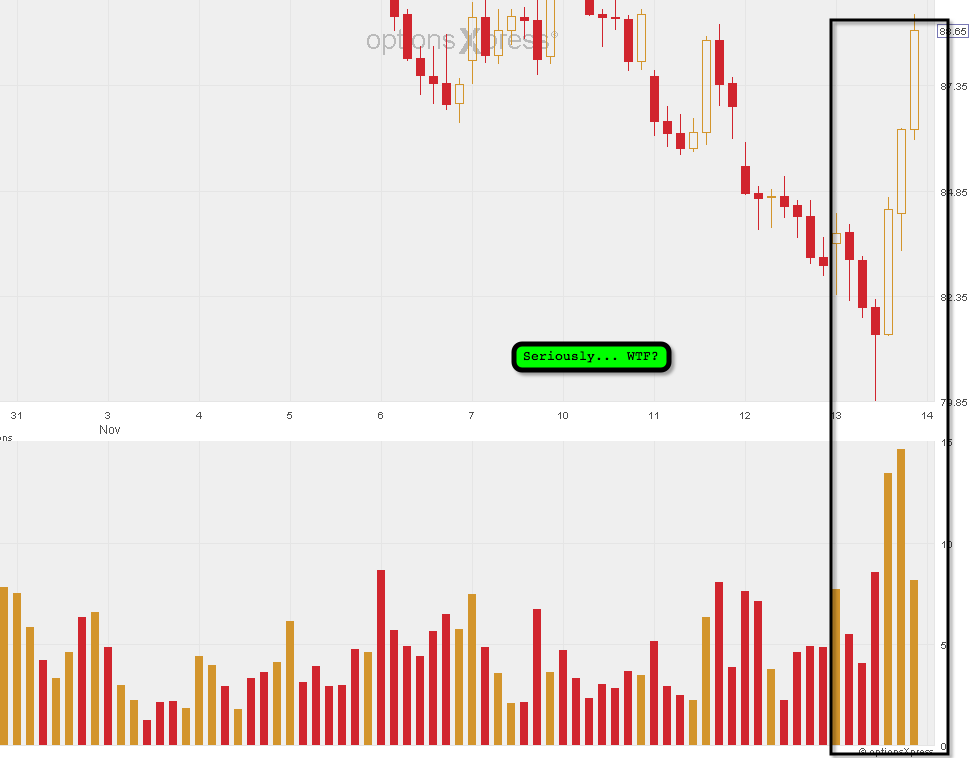 **DISCLAIMER**  This is not an attack on any one particular charting service, as you can see there is a discrepancy between all of them.  Rather, it is a VALUABLE warning to traders to make sure you have a back up feed.  Personally, I have 4 available to me at any time (though I USUALLY only use 2), and I have had bad data on EVERY SINGLE service I have had since I started trading. **DISCLAIMER**

But the point is… it pays to have multiple feeds.  You don’t need to pay 3K for them, but a back-up is ALWAYS a good idea.  I wish I was at my standard work set-up so I could confirm it with yet another (2), but the tendency says… We rose on expanding(ish) volume (though prophet’s MACD was rising as if volume was expanding).

So as you might imagine, today’s tape put quite the kink in my analysis.  The volume was big and the breadth was QUITE bullish.  The ratio needs to be taken as an inverse for bullish action (i.e. (1/0.11) = 90% upside).

Seriously though, we should consider this until 1488 is breached, as that would be our maximum.  That said, we know that we have at LEAST 100 points ($NDX, another 500 in $INDU ($DJI)), and I will pick up some ITM index ETF calls until we get near the top.  The maximum target in $INDU ($DJI) is 10459.44, that would have wave 4 overlapping wave 1 and that would have us looking higher.  Again though, don’t let me get ahead of myself.  We would still need to breach 9500 and 10K before we can think about that, and we are likely in wave [3] of [C], meaning we would expect a strong push tomorrow, followed by some sideways chop for a few days (expiry week), followed by a pop.  Then we get our drop! 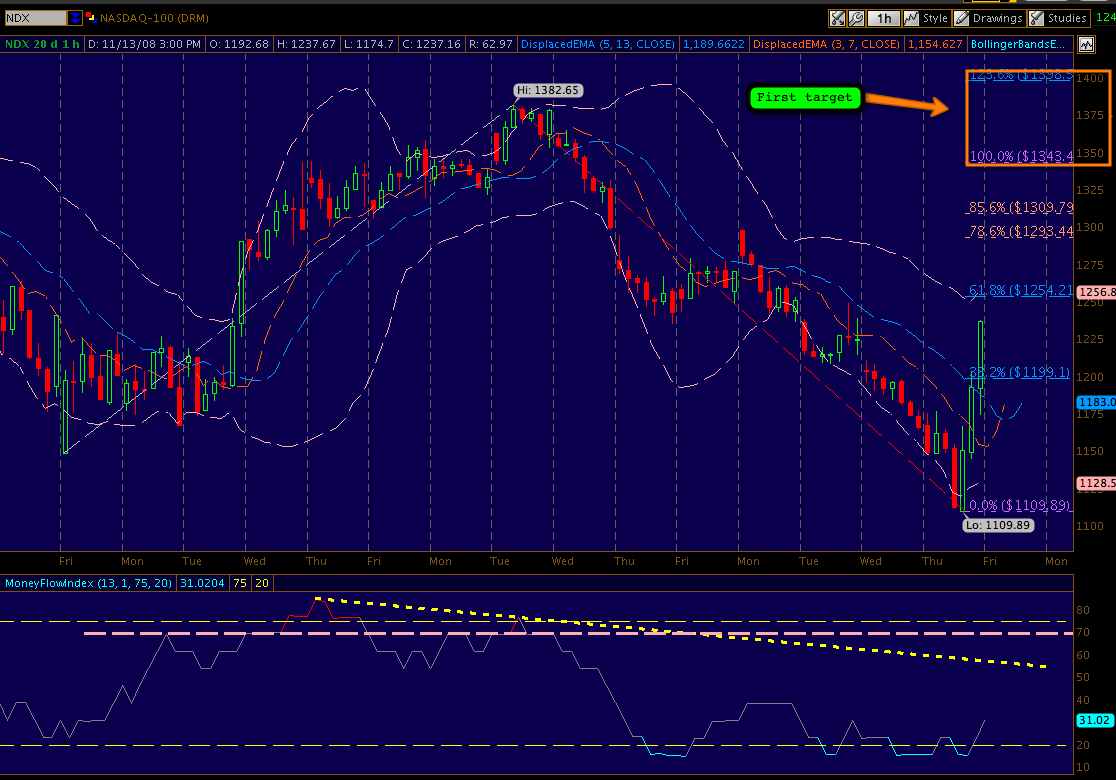 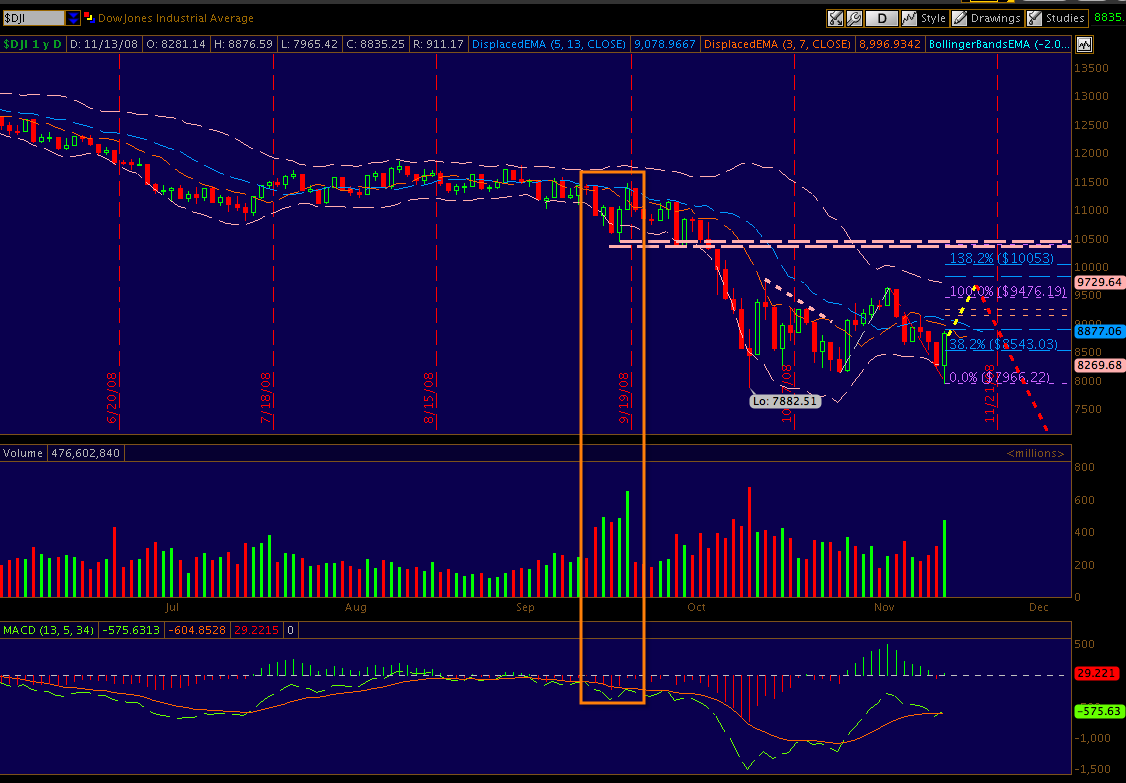 The other option at this point, we be a wave [5] ending diagonal.  If that were the case, we would be looking at the majority of that wave being done at this point, and targeting around 1050 in the $NDX.  The reason that I find this unlikely is the nearly complete reversal of yesterday’s decline, not only in price (bullish engulfing) but also in breadth.  IF this wave [4] of [5] of an ending diagonal (just about to make a BIG move up after a final drop, non-Elliotticians), the breadth and volume would indicate a VERY LARGE move up, as that is some serious expanding volume. 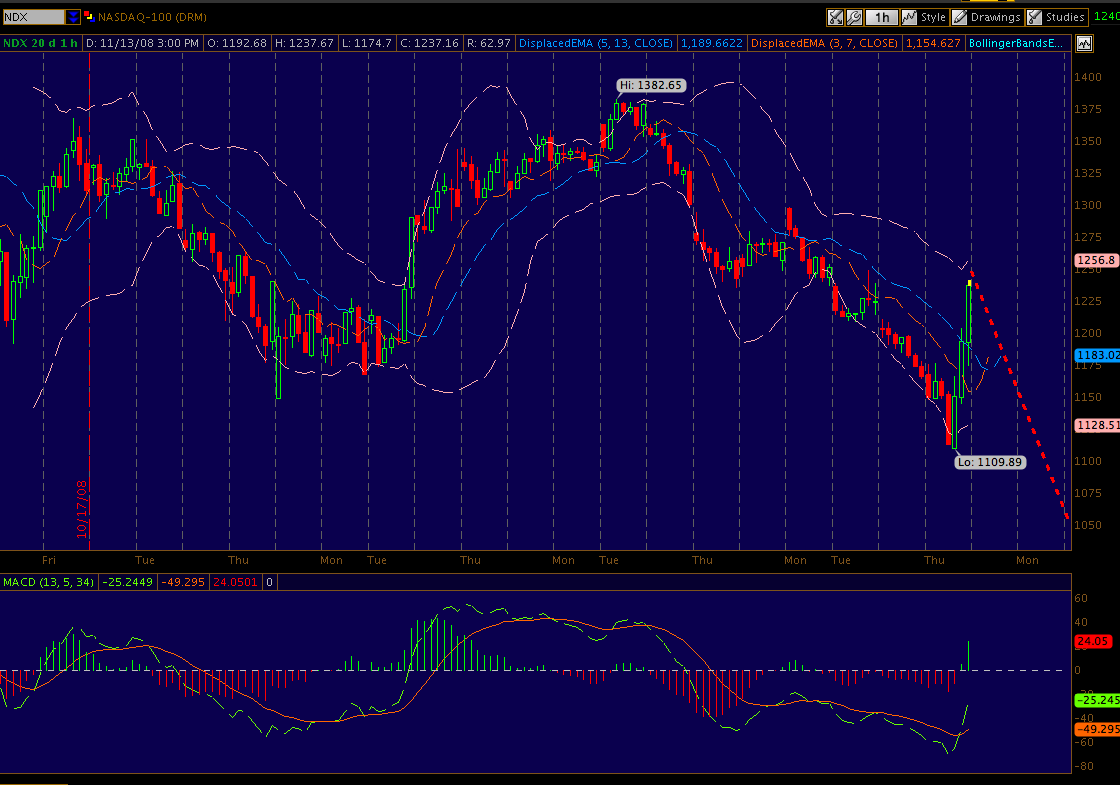 Finally, while there remains a third option on the table, which would be Gumbo’s triple bottom break out.  This in Elliott, terms would be equivalent to intermediate wave (3) being complete, and this is the very beginning stages on intermediate wave (4).  From a TA standpoint, we would need to see a break of 1000 in the $SPX.  However, non-Elliotticians, a break on 1000 on declining volume, and weakening breadth (we will keep you posted on that), would be a GREAT fake-out move, as a maximum target for the wave [4] flat would be 1080, the mid-point of a confirmed triple bottom break-out.  Something to chew on.

With that, I am changing short term indicator to up until we are within our first target range.  The medium term will be up-down, indicating that we might get to start our descent withing the next 5 days.  The long term remains down, as we have yet to breach levels anywhere close to forcing us to change this, and we still believe we will see lower lows on the year.

Just to note also, I believe today (but possibly tomorrow) was a full moon.  I am sure Moony could shed some additional light on that…  Something to think about, for those of you that DON’T believe in “Hocus Pocus!!”

Hope that shed some light on the day’s action.  Lesson of the day… Don’t mess with institutions.  They will kick yo’ ass (on the selling side too).