Alright, Evil Rat Academy is officially in session – but before we get to the meat of this post let me introduce you to our new substitute Mrs. Tightbuns, who will fill in for evil but mentally exhausted Mole today:

I am sure she will be able to re-focus your attention after one of the most boring trading sessions in recorded history. Tronacate – keep it in your pants!

Okay, and now it’s time for the sixth part in our ongoing EWI sponsored series on option strategies. The following post is excerpted from the Elliott Wave International (EWI) eBook, “How to Use the Elliott Wave Principle to Improve Your Options Trading Strategies — Vertical Spreads.” EWI has agreed to make the full eBook available for free to all Evil Speculator readers until the conclusion of this series. So go ahead and download it here if you want to study ahead – however I would appreciate it if we kept all discussions limited to the current chapter.

Last time we looked at a more aggressive strategy called the Ratio Spread If you missed that chapter then I strongly recommend you go back and study it before continuing here. You can also pull up all prior installments of the the entire series via this link. 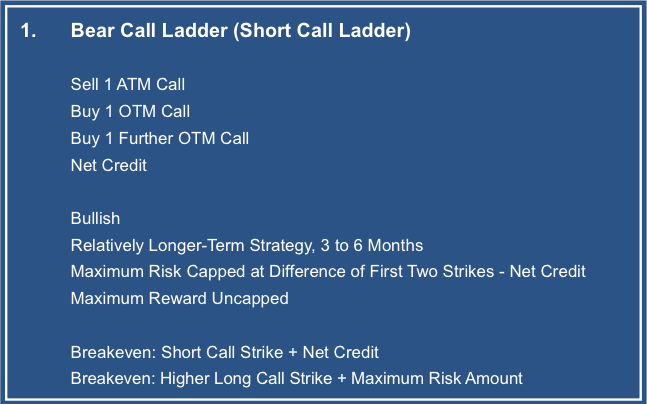 Up next: The “bear call ladder,” also known as a “short call ladder.” In options literature, people may categorize this strategy as somewhat ambiguous and confusing. Are you bullish? Are you bearish? You’re selling an at-the- money call, but you’re also buying two different out-of-the-money calls. What’s going on?

Well, the really interesting thing is that this strategy fits Elliott wave like a glove. The reason being: Wave patterns are often ambiguous and warrant an alternate labeling. The alternate wave count may be telling you to lean in the opposite direction, and that’s where this strategy helps.

First, we’ll go over the basics as they appear in Figure 29. The bear call ladder is bullish. It’s a relatively longer- term strategy — about three to six months. You should be able to squeeze out a net credit on this. You sell an in-the-money or at-the-money call, buy an out-of-the-money (OTM) call and buy a further out-of-the-money (OTM) call. Your maximum risk is capped; it’s the difference of the first two strikes minus the net credit. Notice, maximum reward is uncapped — this is the biggest contrast with the bull call spread. It’s also going to make a big difference in what kind of wave positions we choose. We have two breakevens: the short call strike plus the net credit, and the higher long call strike plus the maximum risk amount (in the area beyond the further OTM call).

In a nutshell, we’re betting on a big move up. Our bias is in the direction of the main trend. Either way, though, we have some protection if prices move down or sideways. We only get hurt if prices go in the direction of the main trend but only for a small move. In other words, we’re sacrificing a small up move in exchange for a big up move, a sideways move or a down move. Not a bad deal, but you have to be able to structure the trade so that it generates a net credit. 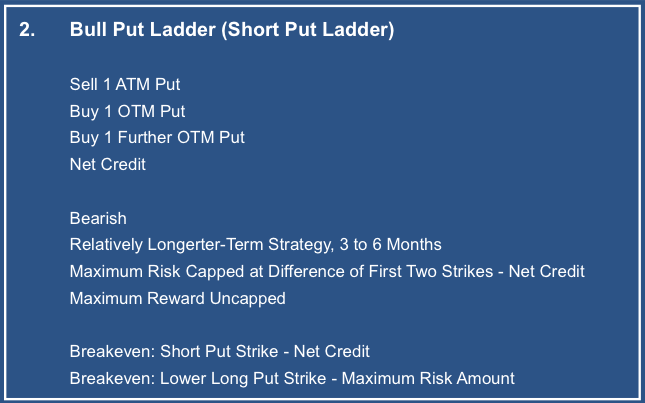 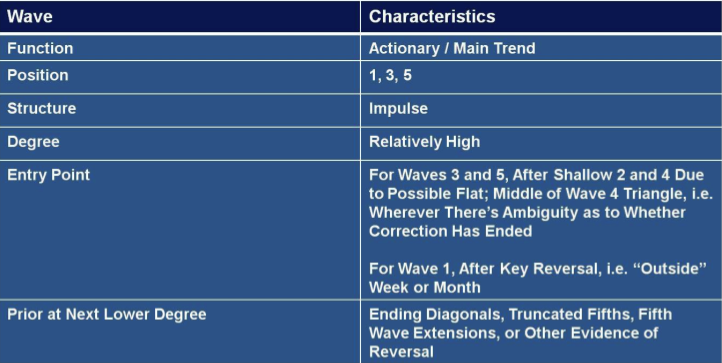 Now it’s time to reveal the ideal Elliott wave context in which to implement this particular strategy.

Mrs. Tightbuns again: Alright, I am going to stop right here to make sure all this sinks in thoroughly. It’s essential you guys completely grasp the basics before we press on. Digest this for a while and if you all behave next Friday I’ll dress up extra sexy and show you an example of how to use those credit ladders on an actual price chart.