Eye Of The Storm

Events seem to be unfolding here a lot quicker than anticipated. At the danger of sounding like a broken record – I suggest you forget about the news and all the Euro drama once and for all. After all – did all that crap yesterday give you any idea of what would happen today? Of course not – the news is engineered to confuse not to educate you. It’s a mass mind manipulation tool and the less exposure the better. Instead recognize today’s wipeout as what it really is – an explosive resolution of obvious technical weakness that had been encroaching on several fronts. That’s it – there’s nothing else to say or think about. And it’s history now and we should only be concerned with what comes next.

Look, I see it all the time – losing traders spent most of their energy hoping for the future and driving their car whilst looking in the rearview mirror. Which is why a certain perma-bear commanding a huge online following started talking bullish yesterday – go look it up. Winning traders don’t concern themselves with the past – unless of course they need to learn from it. It’s a bit of a Zen riddle – the past is all we know at any time and we somehow need to apply what we learn from the past to arrive at odds telling us what may happen in the future. So you learn from the past but you don’t let it affect your outlook of the future. I know – what a mind bender. Recency bias is one of the eight deadly cognitive sins and in particular applies to market megalomaniacs getting lucky when making bold predictions.

Let’s start with the spoos and then we’ll look at what really matters, the currencies. Today’s toilet flush slowed right at the daily 1234.5 sell net-line – what a coincidence (not!). We are now basically at the eye of the storm here – either this was the extent of it after a currently 18.5% jump on the VIX – or this is just the beginning of a lot more downside pain. Again, seasonality does favor the bulls but I’m afraid that will mean very little if we drop through that daily NLSL.

The hourly panel shows us some support here now as well – both lower BBs are converging at the 1236 mark. A breach of those would be strike one – strike two is a drop through the daily NLSL. There won’t be a strike three….

This is really the bull’s Maginot line as technically we are at a separation point between what could be either a bullish or bearish formation. You may recall what I used to refer to in the old days as 1-2-1-2 hell – enough said.

Okay, let’s go downstairs into my badly lit FX torture chamber:
[amprotect=nonmember] Charts and commentary below for anyone donning a secret decoder ring. If you are interested in becoming a Gold member then don’t waste time and sign up here. And if you are a Zero or Geronimo subscriber it includes access to all Gold posts, so you actually get double the bang for your buck.
[/amprotect] [amprotect=1,13,9,12,5] 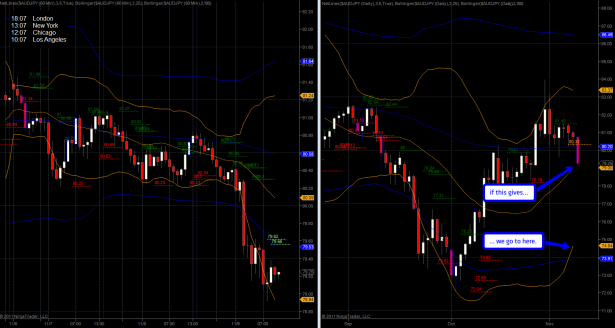 AUD/JPY – as soon as that 80.33 NLSL got breached overnight the writing was on the wall. I’m not sure how many of you were around last night but I was sending out tweets while it was happening – so make sure you are subscribed (hint: top right corner).

Now we are holding at the 25-day SAM but I’m not yet convinced we are done here. The hourly shows us two NLBLs between 79.56 and 79.62 but I don’t think they’re going to get hit before they expire. But if we keep dropping there will obviously be lower NLBLs – look up the rules on the cheat sheet and track this stuff on your end. 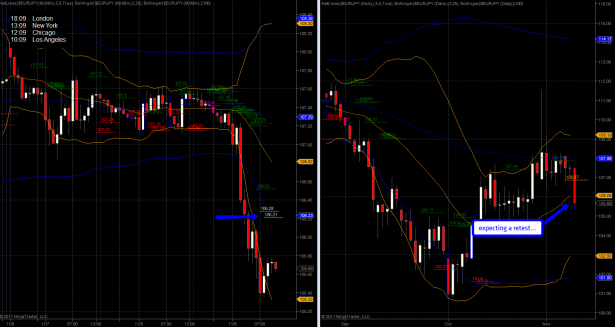 EUR/JPY – another one I presented twice in a row. Same setup – same story. 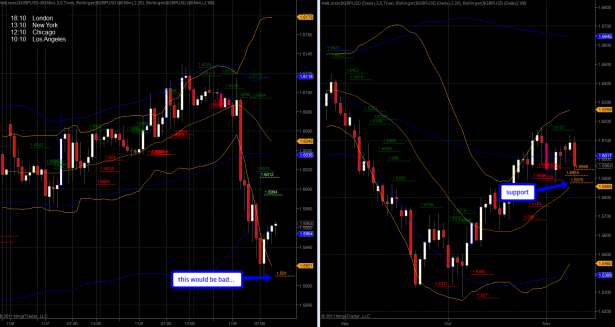 Cable – it’s sitting on a cluster of NLSLs right now and there’s also the 25-day SMA around 1.5855 – quite a bit support. So odds are pointing up right now but set your stop (and possibly an inverse trade) right below that SMA for obvious reasons. If we breach it we most likely are looking at 1.55 even. Also note that NLSL at 1.591 right now – it’s good for a few more hours.

That’s all I have for now – let’s wait for the market to tell us what to do next. It’s not unreasonable to take at least partial profits after a move like this but holding short positions until buy levels are breached is affordable, in particular if you played this via options. Volatility has exploded thus affording you a bit more leeway and patience if you are expecting downside continuation here. That is the big advantage of getting positioned when volatility is low – the nitro boost in your premiums puts you in a position of strength. And that it always the mental position you want to find yourselves in – instead of a position of weakness which forces you to accept whatever bid is offered.