I’m paranoid by nature – strike it up to practically raising myself as a kid – no free lunches over here, no sirree. Add to that a natural disposition towards being contrarian as well as enjoying questioning the world around me way too much and you have a decent recipe for becoming a trader. Doesn’t mean I didn’t have to pay my dues – quite on the contrary, folks. If you think you’ve had it tough you probably never traded gold futures for an extended amount of time 😉

Alright before we get started I want you guys to forget about the market for a second and watch absolute genius in the making. I’d give every cent I own for being able to throw it down like this just once in my life:

BTW, if you ever wondered why I post those clips in the first place. They are my source of inspiration as they somehow crack open my mind. Sunday mornings after breakfast I crank up Rammstein, Metallica, Disturbed, yes even Amon Amarth (pretty rough stuff) and somehow in the murky depths of my mind it throws a switch which pops open the right (creative) side of my brain. I begin seeings things that completely escaped me before – new patterns, relationships, fractals, context – context – context – everthing suddenly falls into focus.

Doesn’t have to be metal by the way – I’m very much into trance, latin, blues, classical – pretty much everything but jazz. Yes, yes – I know – there is something wrong with me. I listen to jazz and I realize that I miss out on something absolutely magnificent and it seems that everyone but me ‘gets it’. But you can’t pretend – you can’t force yourself to like something you don’t. We are all wired in a different way – sometimes new parts open up while others close down. I remember hating grapefruit as a kid – now I absolutely adore it – go figure.

What’s the point of all this? Well – I personally believe that you can only become a good technical analyst and trader if you absolutely and completely love doing it. It’s like Robert Trujillo in that clip above – he is one with his guitar because that’s what he does – that’s what he devotes himself to doing. I can only imagine how many countless hours he must have practiced as a kid – probably had to endure countless blisters to get to that level of skill. Now he’s the bass player of fucking Metallica – that’s what dedication mixed with a bit of talent can lead to.

Don’t think for a second that plotting charts is any different. Yes, hot chicks won’t throw themselves at you and it’s not as glamorous (unless you get rich and can buy that shiny new boat) – but the concept is the same. To improve that extra 1% separating you from the rest will take you years of hard work. An additional 1% may take you another decade. But let’s not forget that the average sprinters and gold metal winners are only separated by tens of seconds – ponder about that for a while.

There are a few superstars out there who trade circles around everyone else. None of those guys and gals were born with that ability – maybe some talent but that’s only the equivalent of a head start. They all had to work hard and it took many sacrifices and financial losses to get to the next level. Those guys are sitting in front of their workstations right now as I speak – charting – plotting – thinking – having fun. If you’re not having fun doing this – then please either do something else or find someone who does it for you. Because this game will eat you alive and spit you out unless you are 100% in it – willing to spend that extra hour – on a Sunday – while your buds are chasing hot poon at the beach. 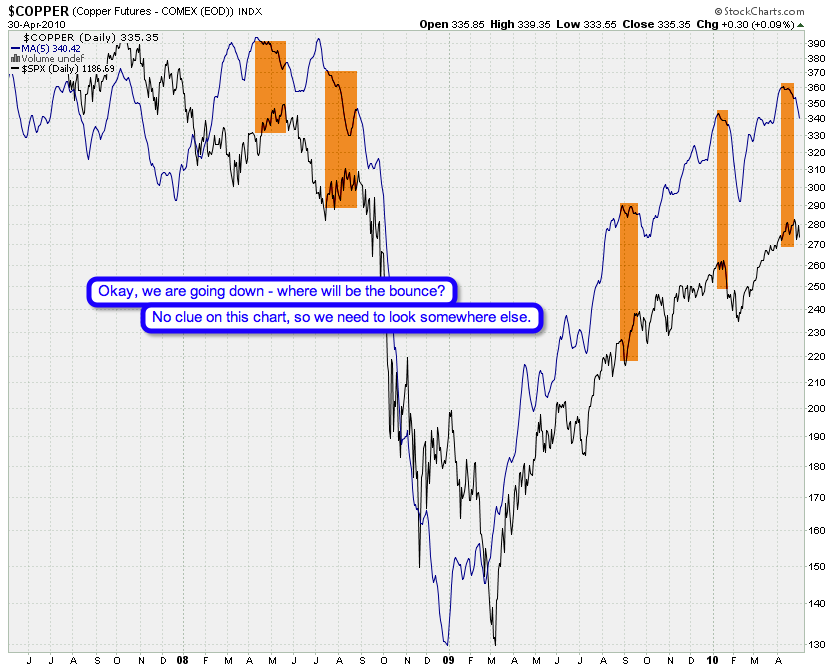 Copper has been insisting on a market reversal for a while now – and we did finally see drop late last week. But after all that back & forth did it really feel like the bears were winning? Not to me quite frankly. Anyway, for a long reversal we need to look somewhere else. 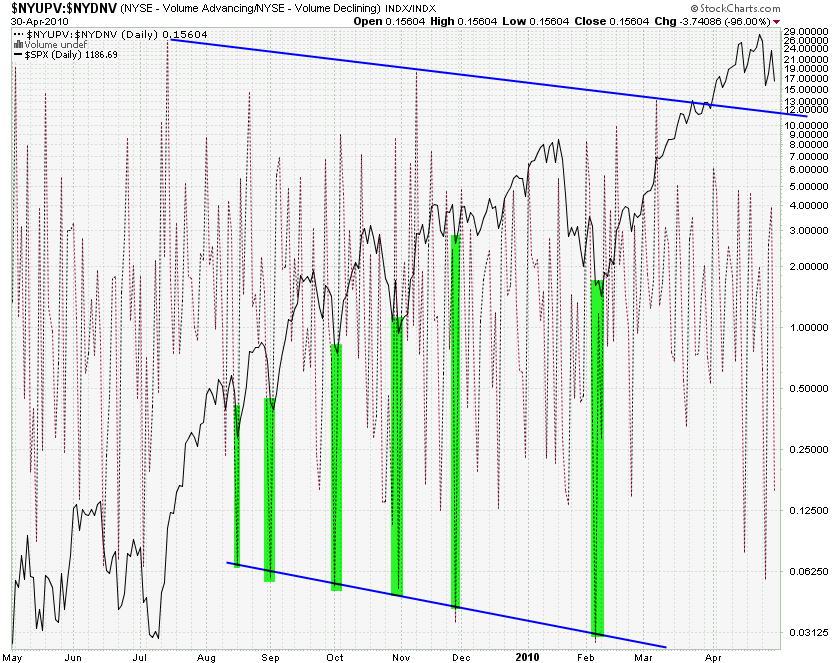 The NYSE Advancing/Declining Volume ratio in all its raw glory. What I’m on the lookout for is a reading at or below 0.03 – that’s assuming we drop much further from here. Maybe it’s a bit premature to start looking for long signals when we haven’t even had much of a down run yet. 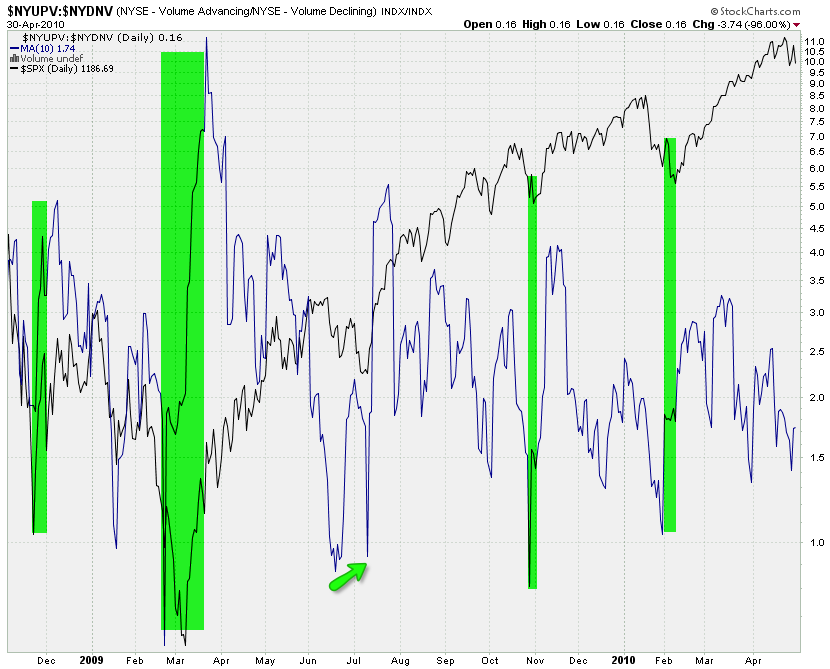 Similar story on the 10-day MA – I’d love to see another drop accompanied by a juicy MA divergence. Even better would be a raw signal drop to 0.03 then followed by a rip up in the raw signal bestowing us with that coveted MA divergence. One can dream… 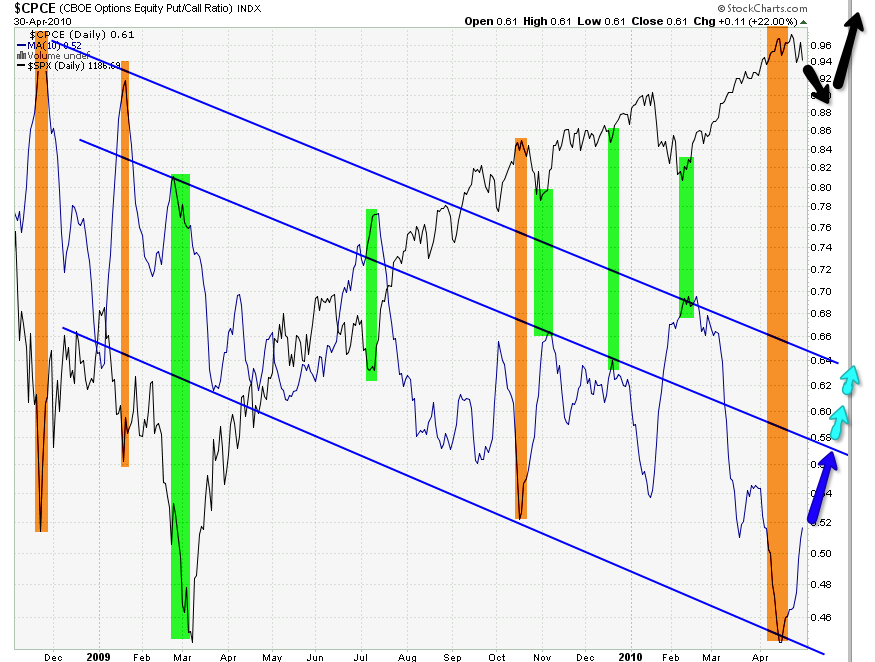 A long reversal may be signaled by a 61.8% fib line touch of the CPCE’s 10-day MA. That’s what happened the last three 1/2 times at least.  If you think we are heading lower then watch the 0.64 mark – that to me would be a final signal to get out of short positions. 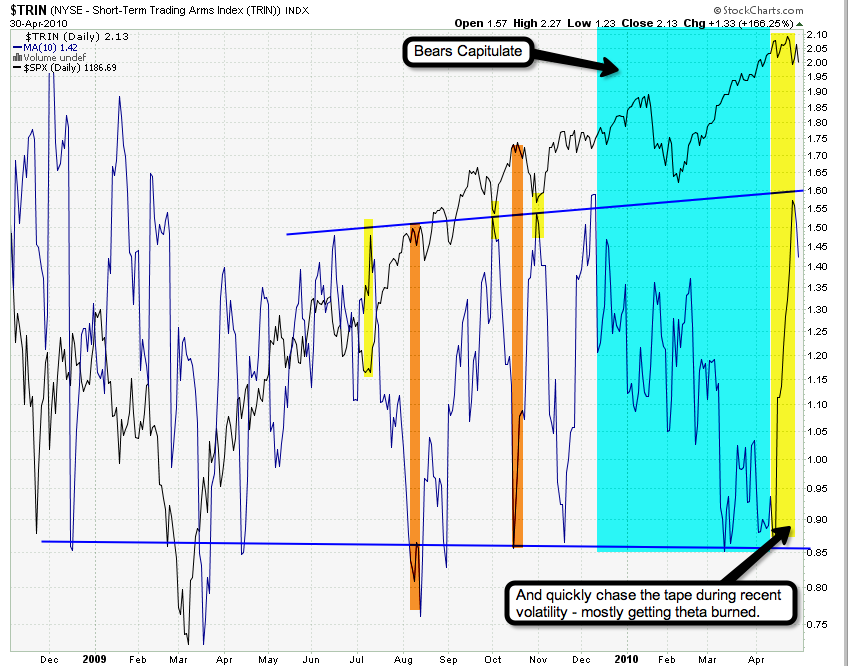 I keep looking at this chart of the TRIN 10-day MA – trying to make complete sense out of it. Yes, the 0.85 touches are valuable and so are the reversals at 1.55. What really gets me is the area highlighted in cyan – the bears had to wait a looooooong time for this thing to come down. and then it failed for weeks before we got a reversal. Now everyone seems to be chasing the tape as we just snapped back without much downside. Not liking it and that’s why I don’t think this is P3. Yet. 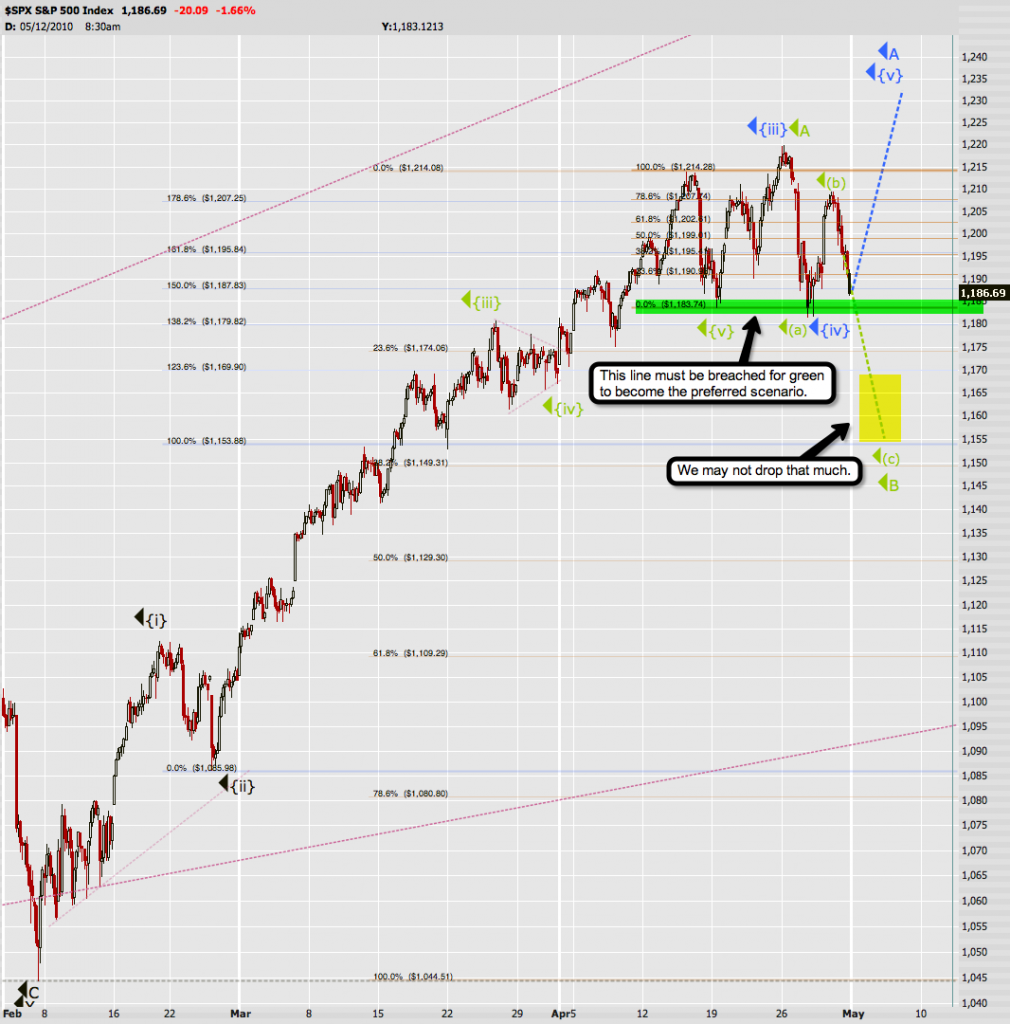 Which brings me to the wave count. Nothing much has changed – we remain trapped in the 1215 – 1185 channel. Which we must breach once and for all. But either way I think you’ll see readings in that range for a while. Even if we breach and drop I believe that downside will be limited. I see 1150 as pretty much a floor – followed by another and hopefully final reversal. The charts I posted above make me nervous as the bears wasted a lot of momentum in sideways tape.

HOWEVER – this kind of pattern often happens when markets start to top after long term up trends. It’s really hard to predict those sudden drops we saw in 2008. This time around there is a chance we may see some fast moves and I think it will be the magnitude of Monday/Tuesday’s tape that I will be watching very closely. If we slowly descend with little mini-rips in between then new highs are but guaranteed. For this trend to breach once and for all we need a catastrophic WTF event that leaves the dip buyers nervous to pull the trigger. So far I ain’t seeing that – again – yet. I know – I sound like a broken record – but on this one I have been proven right for months now. 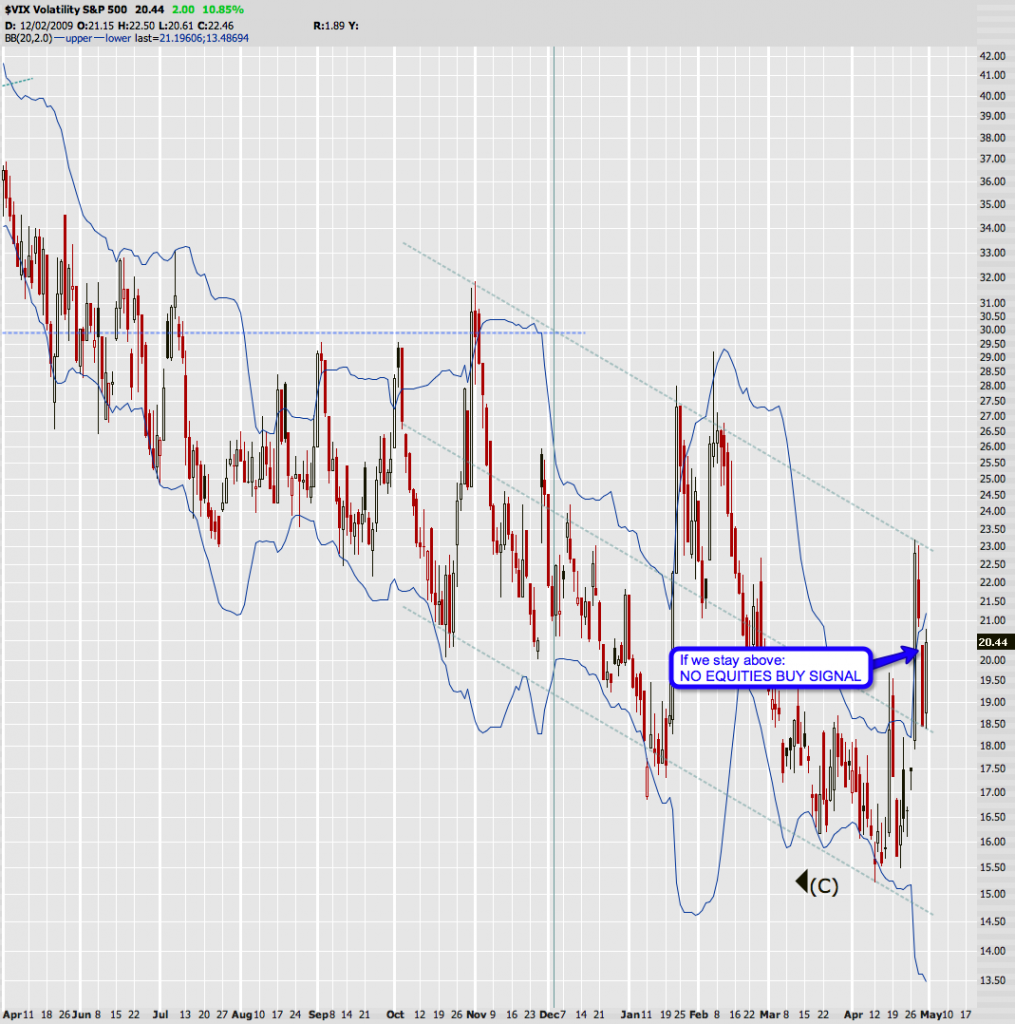 Before I go: No, the equities buy signal on Mr. VIX was not confirmed on Friday. Which is what my disclaimer on the possibility of a major drop is partially based on. The bears have a chance here – mostly because the bulls are getting nervous and I don’t see institutional traders participating in buying. But that may have been because it was late in the month and they may come back in droves on Monday/Tuesday. So, the tape in the next few days is extremely crucial – retail traders can’t hold up this roof on their own – without the big boys stepping in this thing will come crashing down. But we have not seen indications of that happening – and I strongly discourage everyone from chasing the tape to the downside.