Didn’t think I would let you guys down tonight, did ya? 😉 Sure, I did take a bit of a beating in the last half hour, but all it took was a trip to the gym to work off some of that Cortisol and I’m right back to my old nefarious self.

Alright, tonight we are not going to finger point – there is plenty of that going on and if you came for that you’re in the wrong place. We are not going to talk about market manipulation (at least not much). We are also not going to bitch about Ben Bernanke, the PPT, or how unfair the market is.

Boo-hooo! Of course the game is rigged and unfair, otherwise every Joe Shmo out there would be banking coin playing the tape. See, trading is a bit like boxing – the game is rigged but everyone loves it. It’s got the drama, the blood, the adrenaline, and it’s got the winners and losers. Some hot chicks are thrown in for good measure. Behind all the circus there are a select few who are pulling the strings. You knew that when you stepped into the ring, didn’t you?

However, let’s forget about all that, because guess what – we have zero control over ‘the game’. None of this matters. You don’t complain about getting knocked on your ass – you pick yourself up and you keep on going. Because that’s what we do – we are stainless steel rats and we shall prevail. We always do, because we are smarter than they are – we are not immune to dirty tricks but they don’t matter in the long run.

What I do want to talk about tonight is focus. There is a good chance you have lost some of yours after this horrible whipsaw. Focus is everything and if you lose it you’re doomed to fail, no matter what you do.

Not sure how many of you saw the last Superbowl, which I think everyone agrees at this point became instant football history. Frankly, it doesn’t get much better than this. This is how it went down: The Cardinals are in the lead with less than a minute to go. It’s crunch time and Roethlisberger knows it. I don’t know why I but somehow I knew he’d go for a Hail Mary – maybe something magic was in the air. And sure thing – he throws a perfect pass over three different Cardinals into the back right part of the end zone. The Steelers’ wide receiver Santonio Holmes stretches his hands high in the air and somehow manages to grab the ball. While making that spectacular grab he also somehow manages to tap both toes down in bounds, giving the Steelers a 27-23 lead with just 35 seconds left.

This is what I mean by focus. It’s the difference between winners and losers. Simple as that. You lose your cool you are toast. You doubt yourself – you are toast. You are beaten down, on your ass, feeling like you need to throw up. That is the defining moment in your life, in which you decide if you are a winner or a loser.

What are you? I know what I am – and that’s why I’ll show up for work again tomorrow morning – trading my my system and relying on what I have learned over the years. I’m not going to force it – I’m not going to try to ‘get it back’. I’ll trade like the evil trading machine that I am – cold, ruthless, and in the end – profitable.

Listen rats – what happened today is a bit like a terrorist attack. You never see it coming. Beyond the human tragedy I always find it interesting to observe human behavior after an attack. The day after the event security is on high alert, everyone is scared and worried about a repeat. But it never happens of course, as the one important ingredient is missing – the element of surprise. If you are a terrorist and you made it out alive, you’re gone by then – your job is done. After a few weeks people start to relax again, and slowly over time they let their guard down. Officials start pulling back some of the security forces, they become more lax again. After a few months, it’s back to business as usual (well, almost – I’m not trying to trivialize the situation). Which is exactly when new attacks occur – probably somewhere else than the first time around. Rinse, lather, repeat.

Something we all need to get used to is that this market is manipulated. If you cannot deal with that then you need to stop trading. NOW. Just cash out and walk away. Because it will happen again. What you might not want to hear, but what I want to drill into your little skulls tonight, is that the top dogs will do whatever it takes to maintain the status quo. It’s always been like that and that will never change.

So, we have to smarter and more nimble. We have to position ourselves in a matter that reduces risk. Which when it comes to trading options is either at extremely overbought or oversold moments in the tape. The right thing to do this afternoon would have been to expect the unexpected and take profits when we were nicely ahead. I take responsibility for that. My focus was on the big picture – but as an options trader I cannot be focused on the wave count only. I need to make sure that I don’t run out of time and that I score while I can. Just like Roethlisberger. 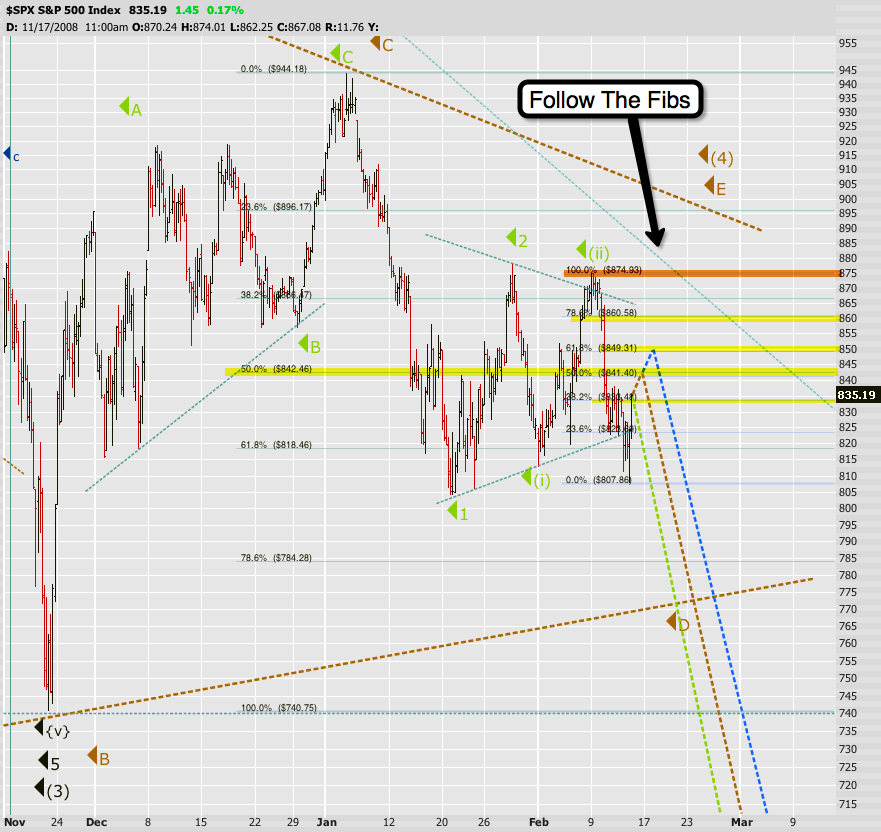 I only have time for a few charts tonight – please forgive me but I have a busy day tomorrow and need to prepare. My core position is that nothing much really has changed – imagine that. We did breach the triangle, which IMO confirms the green wave count and increases the odds that we are in minor 3 of intermediate (5). Unless we breach the February 9 highs that is what I consider the highest probability wave count. 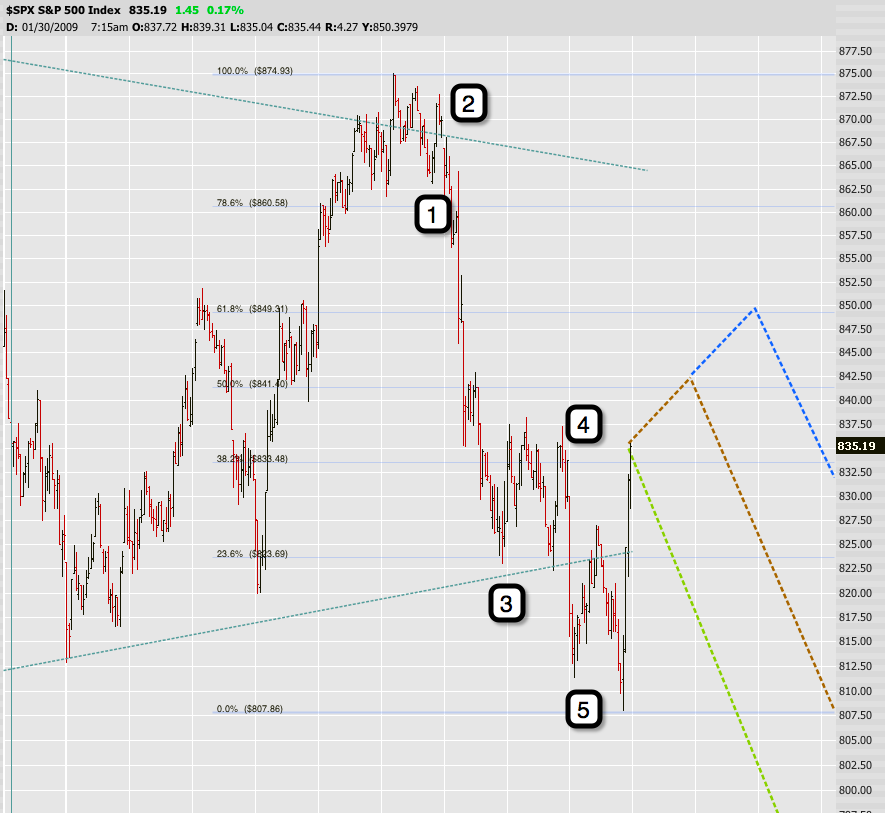 I usually don’t count the smaller degrees to make forecasts, but it seems as if we painted 5 waves to the downside and are now tracing out an a-b-c. We might be in c already, in which case today’s low was actually the b-wave of a flat, which would make the early morning low an unorthodox bottom, meaning it’s a bit higher than the bottom of the b-wave but we count it as the bottom. I’m not sure this is exactly the wave count but quite frankly, it’s mostly academic.

It’s the fibs that should guide us again. I have highlighted important resistance zones in the first chart. There is a distinct possibility that we touch 842 or then 850 tomorrow, which should give us an opportunity to evaluate the tape and scale into or out of positions. I’m still sitting on my March puts and depending on the strength of the tape will decide to cut and run or not. 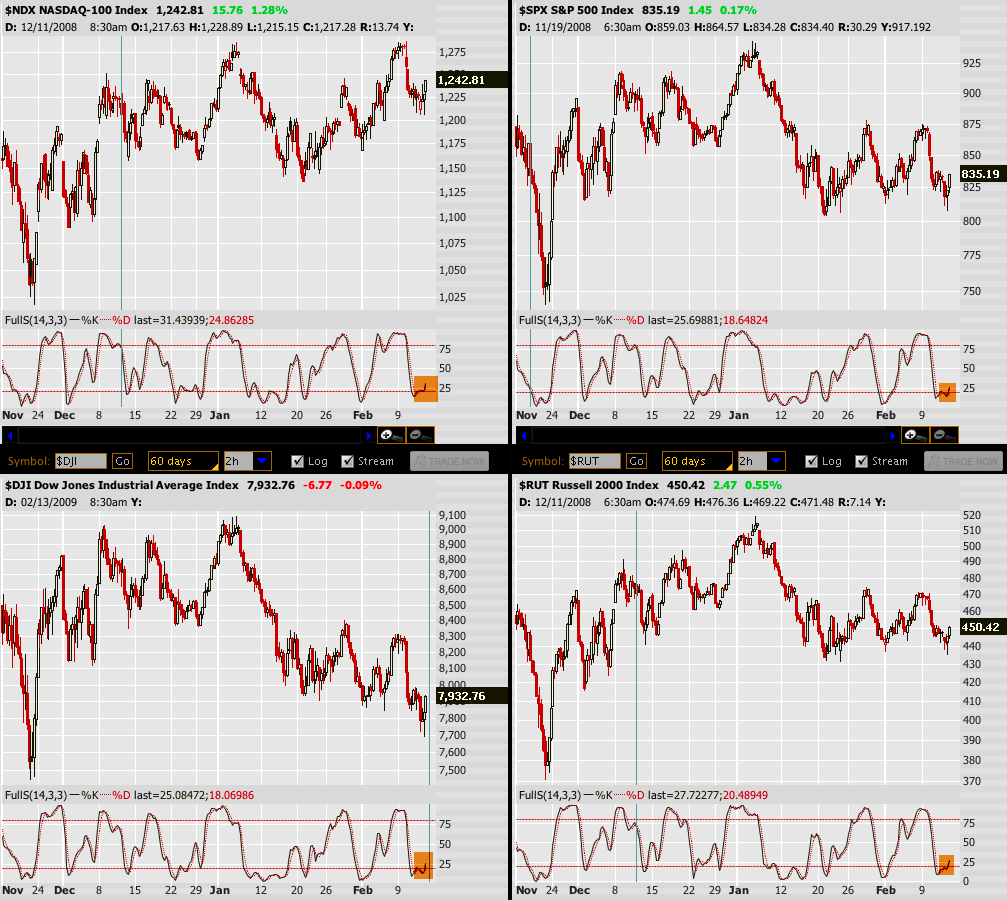 You all know my favorite index stochastics grid by now. This one is extremely important tonight and I want you guys to replicate it and watch it tomorrow. Reason being is that all four indicators are painting a strong buy signal right now. Sometimes what you get is a swing back below and the selling continues with added vigor. However, once they push above 30 or 35 they rarely turn back – you can test that back with those settings on your own if you want.

So, if we push higher and there is no divergence in that the stochastics stay right here or turn lower then I will probably cut my remaining puts and seek some safety until I we are back in overbought territory and it’s safe for a reload. Remember, if we want to beat the market at its game going forward we have to be double paranoid and reduce risk as much as possible. It’s only going to get worse from here.

That’s all I have time for tonight, sorry rats – so many charts and so little time. But I’ll make up for it tomorrow during the day.

UPDATE 11:11pm EST: I like this article so much, I had to put it on tonight’s must read list.