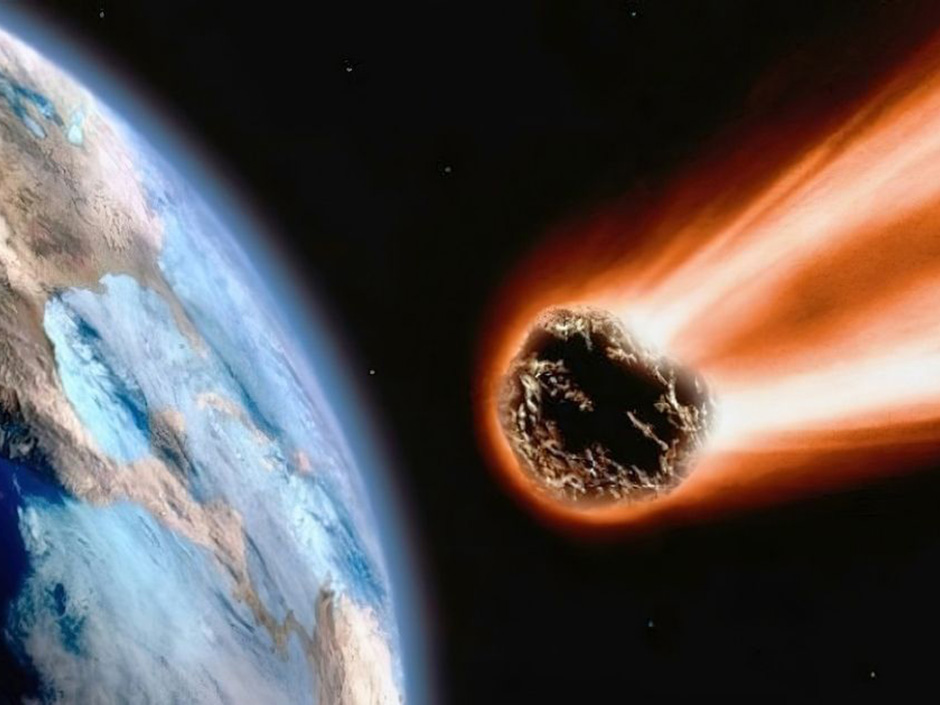 Investor sentiment has fundamentally changed post-COVID and it’s going to take a MAJOR market correction to revert it back to what I would consider normal. Until that happens we will continue to face a skewed marketplace that is effectively suffering from an acute bout of futurophobia. 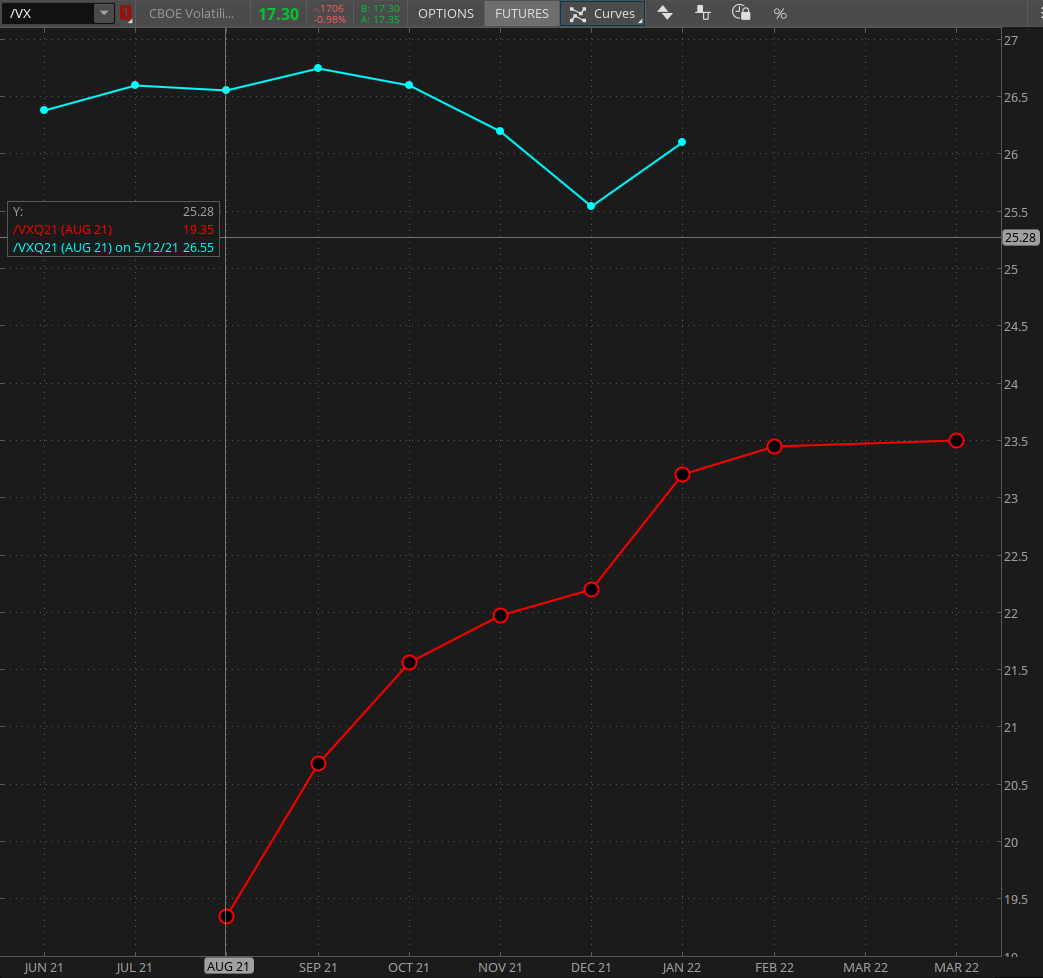 Just think about it: While equities have clawed their way higher week after week after week, market participants operate in constant expectation of impending doom, which just like Godot, however never seems to arrive.

I observed this phenomenon as early as back in November of last year when I kept noticing that forward implied volatility remained stubbornly steep, producing chronic contango in the VX futures as a result.

Even during the most scary periods (most recently in May) the front month contract never rose above its following months, which strongly suggested that the market was pricing in doom and gloom but was not at all convinced of it actually occurring.

And as you can see on the chart this mindset not only continues to date, it appears to become ever more pronounced. 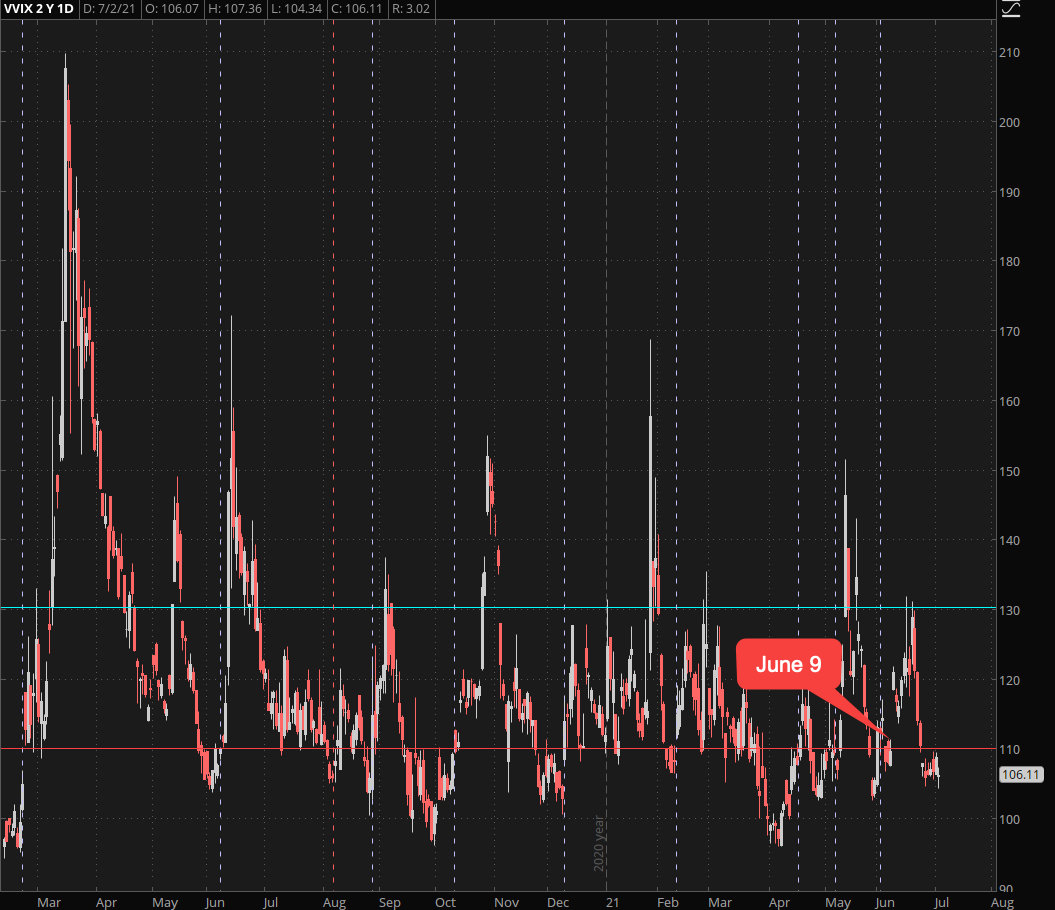 But how does that matter if you get to sell overpriced OTM premium to hapless retail traders? I for one have been doing just that and it’s been paying very handsomely. In fact as of right now this is the favorite game played by institutional traders in the options market.

Recall how the VVIX flagged possible signs of trouble around June 9th, less than a month ago. In case you are unaware, the range above the 110 mark is traditionally considered the VOMMA zone in which bad things happen to good people. 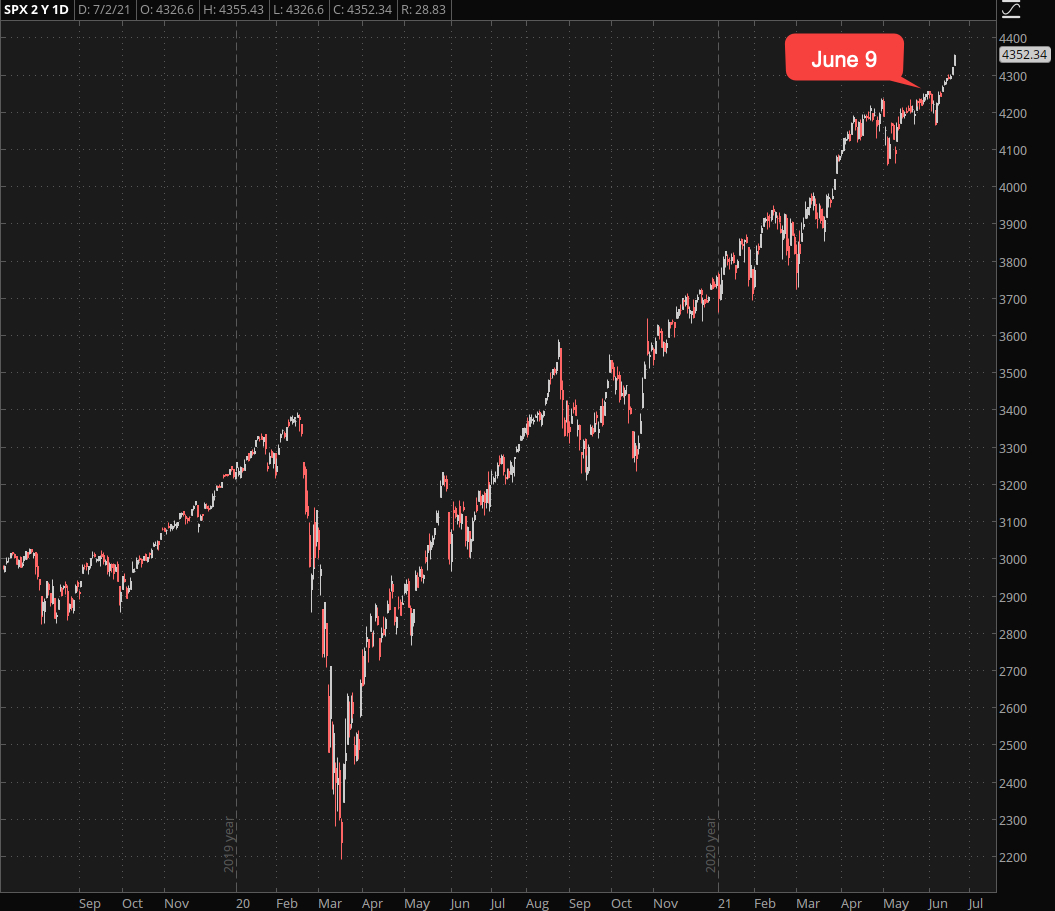 And here’s what really happened. A little dip on the equities side but in the overall context of a 15 month bull market that has effectively doubled in price I would consider it nothing but a mere hiccup. 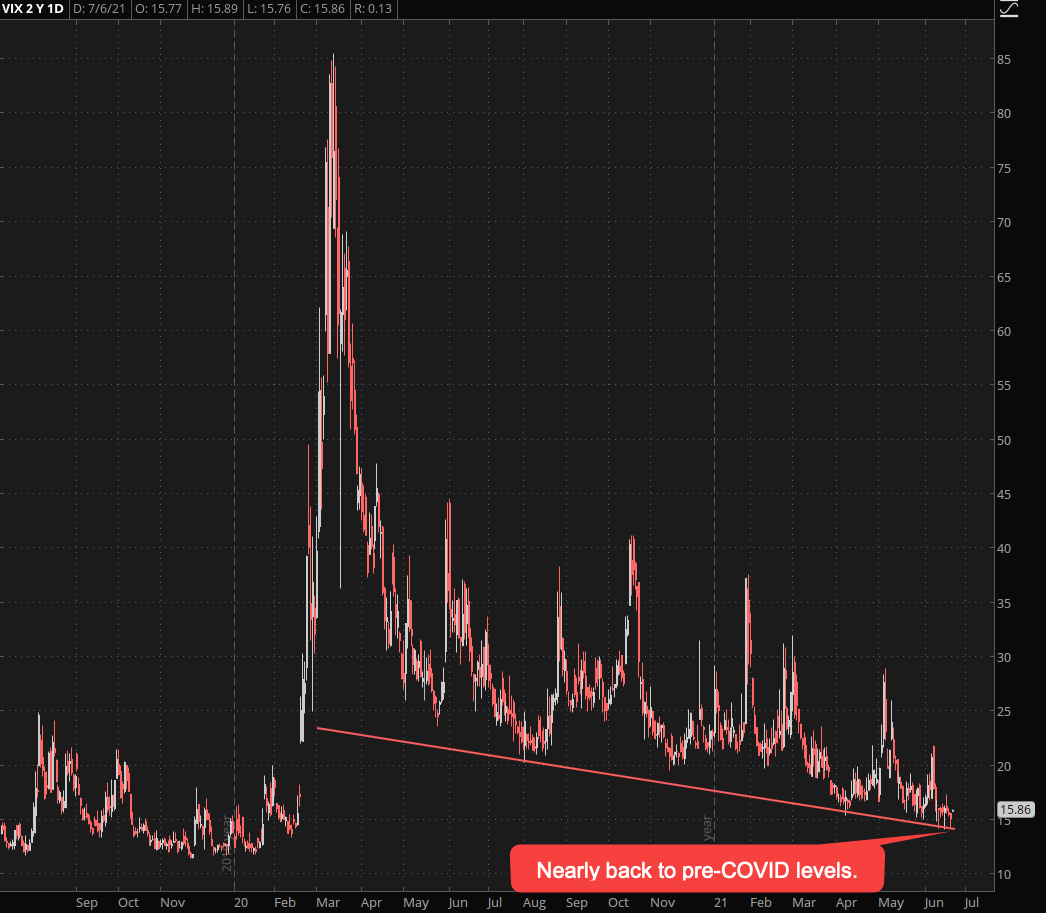 In plain English, the market is becoming more boring and predictable. And despite the VIX having reverted to pre-COVID levels investors are becoming ever more paranoid about the future. 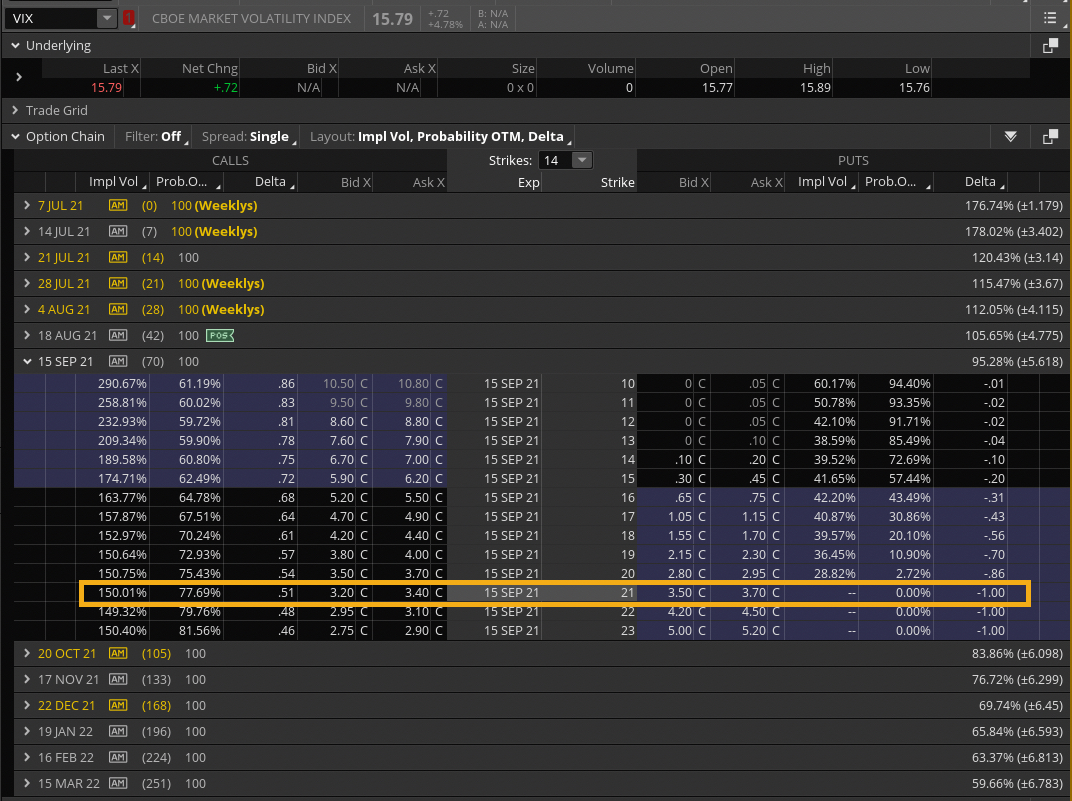 The result of that is that excessive SKEW which I have covered on countless occasions. Very simply OTM puts are becoming ever more expensive, which is another way of saying that the market is pricing in a lot of forward risk.

So what are the implications?

Quite the opposite of what you would expect: As long as fear persists the market continues higher.

During normal bull markets investors become complacent and toward the end you get one of two scenarios: Either it rolls over and just dies or you get a high volatility blow off top after which gravity sets in.

But this is different – very different from what I’ve seen during my entire trading career.

Yes we all recall the old aphorism that the market climbs the wall of worry and descents the slope of hope.

However SKEW like this can only materialize when there has been a fundamental shift in market perception.

And quite simply: Nobody trusts this market further than they can throw it, but with fiat currencies and bonds in the dumpster equities are the only game left in town, so everyone holds their nose, piles in, and hopes for the best.

How long this can continue is anyone’s guess and we all know trading on guesses is a losing proposition.

The only way this can end is when everyone and their grandmother is fully invested, after which it can die, screwing the maximum amount of people.

If you want to learn more about how to trade implied volatility and SKEW like a pro then look no further than my Options 201 masterclass in which I focus specifically on calendars and vertical spreads.

Or you can continue to lose your ass buying OTM put options that keep expiring worthless. Easy choice for me but I’m not your daddy 😉