Good News Everyone – We Had A Drawdown!

Now that I have your attention let me explain. A few weeks ago I finished implementation of an Equity Curve (EC) Filter for CrazyIvan – if you missed it then feel free to point your browser to my pertinent post which also covers the general theory behind it. In theory EC filtering works wonders avoiding draw down periods which are inherent among high dependency strategies. For a good example look no further then the CrazyIvan performance stats of the past five months: 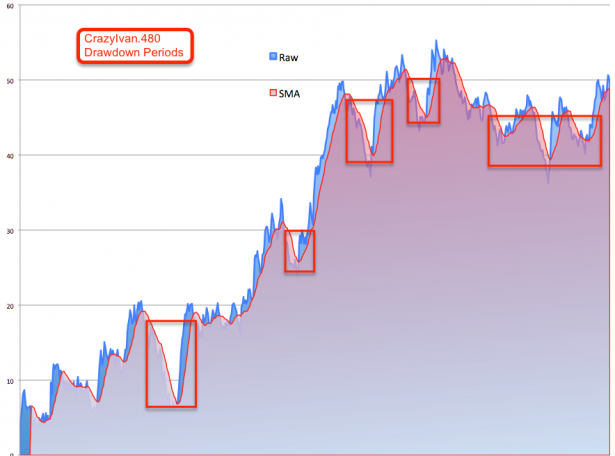 This graph above shows us the stats of all six CrazyIvan symbols (Forex and futures) combined starting from January 1st to the last trade which closed today. Quite a few draw downs in there and to no big surprise as Ivan’s basic system is known to alternate between earning and shake-out periods. Over time it does come out ahead but still – it naturally does bode the question as to whether or not it would be possible to avoid especially some of those deep drawdown periods. If you read the previous post which introduces the concept of EC filtering it sounds almost trivial to implement. Obviously CrazyIvan is a high dependency system and thus makes for a great candidate.

The trick however was in running six separate symbols concurrently against one single equity curve. Let’s not forget that CrazyIvan trades on 480 minute charts, which means that campaigns can potentially be open for several days. And that complicates matters. What the original article doesn’t cover is the problem of inertia which is inherent in trading multiple symbols against a single equity curve. For instance let’s say I have three open campaigns right now and one of them closes. The one that closed gets logged to the spreadsheet and let’s say that it was a winner which pushed the equity curve back above its SMA. So we’re trading full position sizes again – great!

However a few hours later the other two campaigns close as well and they get logged as having traded full percentages. But wait a minute – both of them originated from before we pushed back above the SMA. So when analyzing your strategy you can’t go by the close out dates as they will be deceptive. This only works for strategies that trade single positions against an equity curve tied to one symbol only. You also can’t just sort your spreadsheet by the exit dates only as you now don’t know which strategy triggered the SMA rollover and thus how to build your equity curve.

If you manage to solve this problem there is an additional one as well. You could have five open trades – all winners during a drawdown period. Another campaign triggers – so do you still ignore it or only take a fraction of your risk percentage? Or do you consider open trades as well – and when? After much debate we decided to consider open trades in addition to the list of completed trades. Again trivial in theory but in reality it opened up a Pandora’s Box of engineering problems. It took me weeks to implement this properly but in the end all our efforts paid off handsomely as there are good news to report: 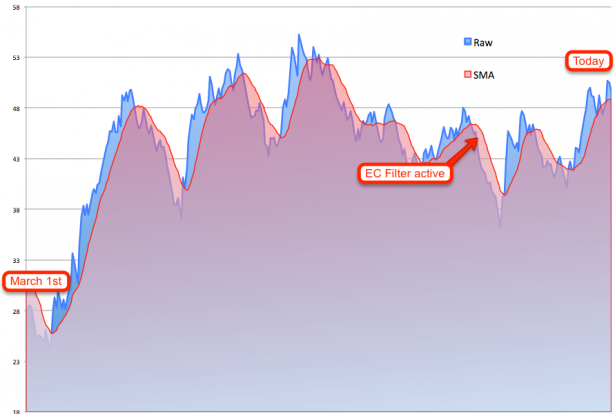 So here are the past ten weeks of CrazyIvan – once again we’re looking at the raw equity curve against its SMA(12). Now we were pretty lucky on the timing side as we turned it on right before a deep draw down that would have pushed us from near 48R all the way down to 36R. That’s a rough one and although the raw version of CrazyIvan (the blue line) dug its way out of it naturally (as expected) I’m sure many of our subs would have been less than thrilled. 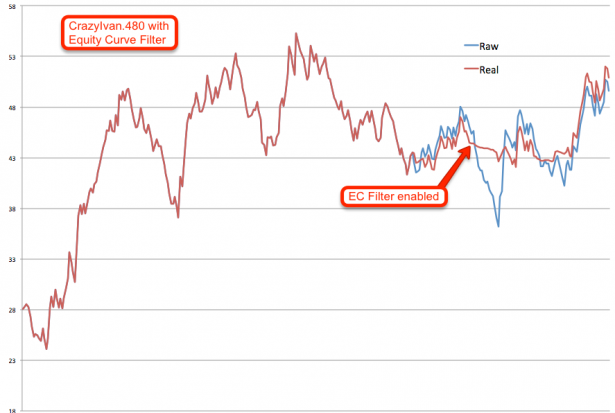 If you peruse the original article you know that the author tested various EC filtering techniques – one that completely skips trades and two that adjust position sizing based on a fixed fractional position sizing. Which is fancy talk for taking 1% or more above the SMA and let’s say for example 0.3R or less below it. As we are suckers for punishment we decided to follow the second model for several reasons – 1) we believe it to be superior as it may get us out of draw downs quicker – and 2) technically speaking it would have been a royal pain in the butt to not trade at all during off periods. At any rate – implementing the idea was more difficult than anticipated but we got it done.

The latest stats are shown above – the raw version of CrazyIvan actually got pretty lucky there as it enjoyed several 3R winners last week. Nevertheless the EC adjusted version is already starting to pull ahead, and that’s only after two weeks of being active. But most importantly – look at the nasty drawdown right after we had turned it on. It completely avoided all of the pain – psychologically this would have been a rough time for even the most placid of my subscribers.

The graph above also shows us that our technique of considering open campaigns for our EC algo works rather well as I don’t see much inertia at all. It seems to be rather responsive and that’s good news on all fronts.

Some of you may remember that I was also working on an alternative messaging model for CrazyIvan (and  soon Heisenberg). I reviewed various options (e.g. SMS, WhatsApp (popular in Asia and Europe), Snapchat, etc.) and in the end settled on XMPP a.k.a. Jabber. It’s not very popular compared to Snapchat or Whatsapp but it’s open source and it’s completely free. Most importantly there are a ton of mobile clients that support XMPP and since I’m running the service there won’t be any spam and no ugly surprises once (and not if) those companies change their business model.

Well, after testing it on my end for over a week I just deployed the latest version of CrazyIvan which now also sends Jabber alerts to your phone or your computer. If you are a sub and haven’t signed up for a Jabber account yet (and are interested) then please write me an email to admin@ with your current Evil Speculator username and the password you want. I have tested several Jabber clients, so here is a list of my favorites:

For Windows there are a ton, so check the whole list. On OS X the list is a bit shorter but I like Psi – works like a charm. Usually all you have to do is to enter username@evilspeculator.com as your login and the password you sent me in order to connect. A few clients require only the username and the server name separately but I’m sure you can figure it out – if you run into trouble then let me know. Oh, and in case you’re wondering – of course we’ll keep email alerts as most seem to prefer them.

And that is it for now – see you later during the session.