While many of you have been frolicking at some alpine ski paradise or testing the resolve of your battered digestive system the Mole has been busily scheming in his evil lair, carefully planning his next frontal assault leading to market domination. Think Pinky and the Brain but without the cheese and the cages. As I have been hinting in recent weeks – devious new creations are in the works and I’m getting close to unleashing them into beta. More on that in early January – but suffice to say we’re about to kick things to the next level. You have been warned!

So what are we to think of all the brinksmanship and political circus coming out of Washington? To quote the late Douglas Adams: It’s It’s all devastatingly true – except the bits that are lies. To be more specific – none of it matters to us traders, so you can safely ignore it. Quite frankly anything can happen on Monday – it’s the last trading session of the year and after a rather disappointing Santa season it’s anyone’s guess where we’ll wind up tomorrow. I think it’s safe to say it’ll be volatile, but I maintain none of it matters and you shouldn’t care. Whether we rally tomorrow on some last moment announcement of a deal or if we finish the year with a wipe-out does not matter. What happens after is what matters. 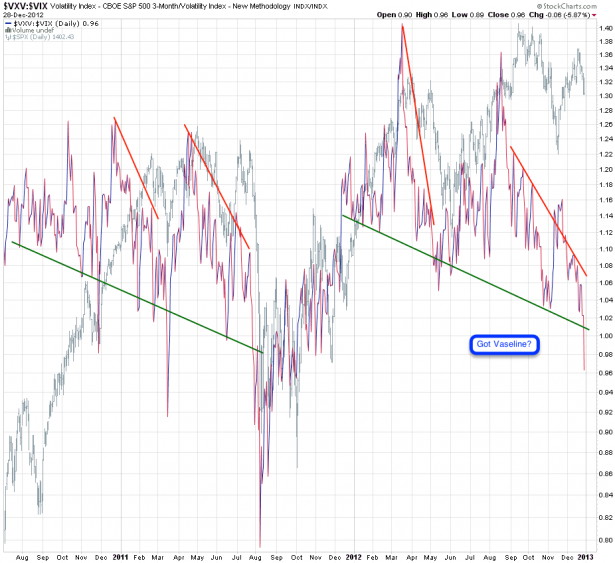 Let’s begin our sordid tale with a chart I circulated over the weekend. What you are looking at is the VXV:VIX ratio – for the noobs: we are comparing front month implied volatility to quarterly IV. The purpose of this exercise is usually to gather some hints as to what market makers are thinking. When we see divergences when compared with medium or long term price movements then we usually can assume something nasty is waiting in the woodshed.

In this case however we’re taking a slightly different perspective. I have zoomed out a little and want you to compare this year’s signal range to what we saw between August 2010 and August 2011. If you ask me – it’s looking eerily familiar and if the pattern continues then we ought to see more downside looming ahead – no matter what happens on Monday. Perhaps a spike higher on a last minute deal may put is in a fortuitous position once all the hype wears off and reality starts setting in as we are heading into January. Got vaseline? 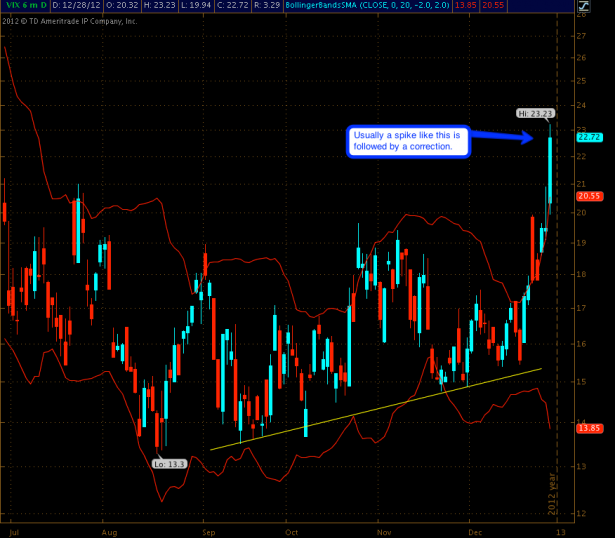 The VIX on its own painted a rather nasty candle on Friday and usually a spike of these proportions is going to be followed by at least a quick correction. Should it NOT happen and we see a wipe out (and of course a jump toward the 30 mark) on Monday then I would be looking for the same on ‘the day after’. I know that’s a pretty tough cookie to swallow. I would love to just being able to tell you that we’re looking at a great long opportunity on Monday. But the current conditions qualify as extenuating circumstances, and it is almost impossible to make a pertinent prediction for tomorrow. 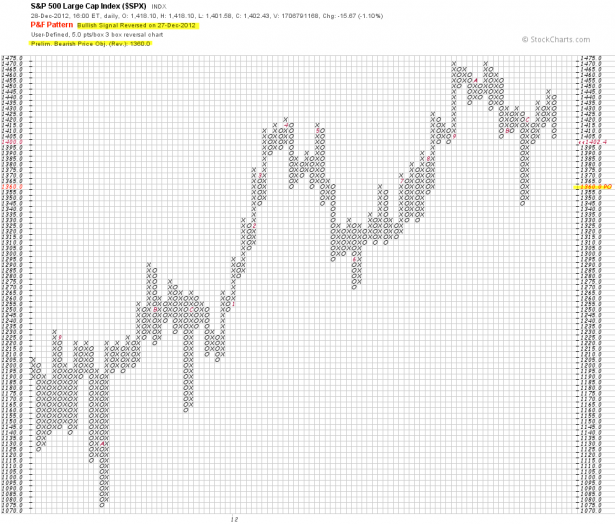 Our SPX P&F chart triggered a bullish signal reversal on the 27th and that now opens the gate to our new preliminary bearish price objective of 1360. Truth be told this price objective is rather academic and if we keep dropping from here in the new year things may start accelerating. Also, if there’s a large spike tomorrow then the current PO will remain in price until we breach SPX 1445.

Quite a bit more where that came from – please step into my lair:
[amprotect=nonmember]
More charts and non-biased commentary below for anyone donning a secret decoder ring. If you are interested in becoming a Gold member then don’t waste time and sign up here. And if you are a Zero or Geronimo subscriber it includes access to all Gold posts, so you actually get double the bang for your buck.
[/amprotect]
[amprotect=1,13,9,12,5] 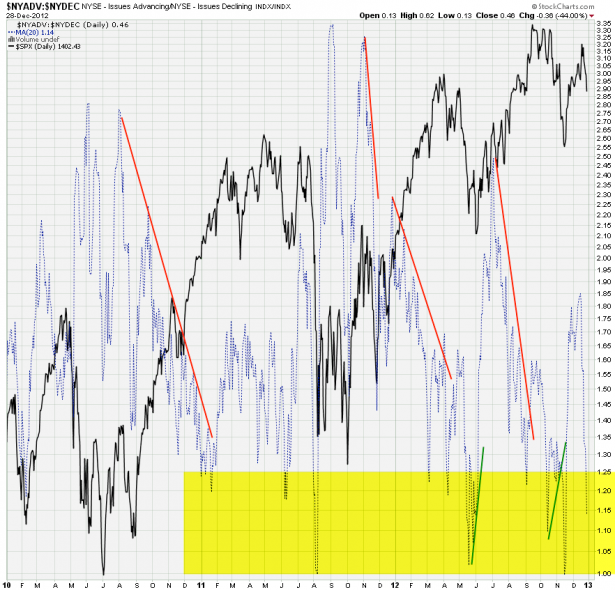 Here’s the NYSE advancing/declining issues ratio – we are looking at market breadth. As you can see there has been a rather steep signal drop during the holiday week and that adds more credence to the notion that we may see at least a short term bounce here next week, fiscal cliff deal or not. 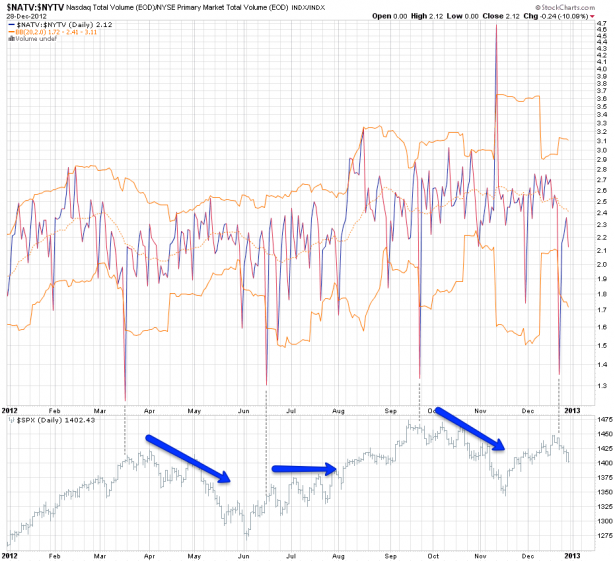 This is an interesting one – the last year of Nasdaq total volume vs. NYSE total market volume. It occurred to me that these downside spikes are appearing in precise intervals and were closely correlated with both equinoxes and solstices (spooky – ain’t it?). Not sure what to make of it yet but every time we saw a spike like this the market embarked on a meaningful correction – during the summer we got a sideways one but it was a correction nevertheless. 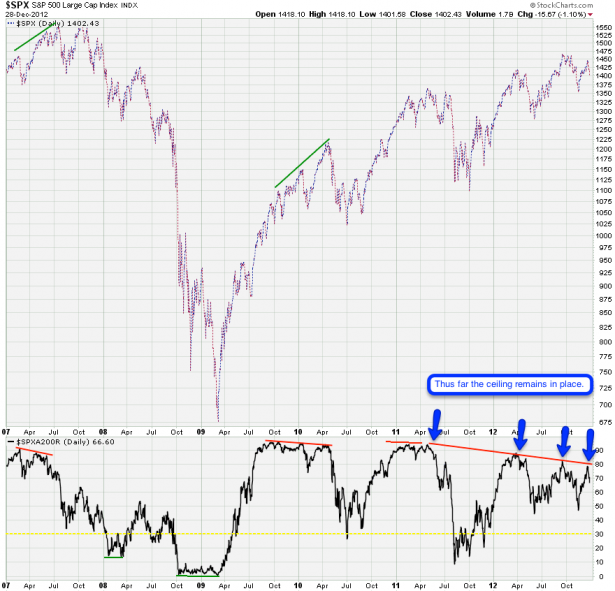 And as suggested the SPXA200R continues to observe that dropping diagonal ceiling. If we push higher again from here then look at this one for a touch of the 80 mark. Things ought to reverse or go sideways near there. 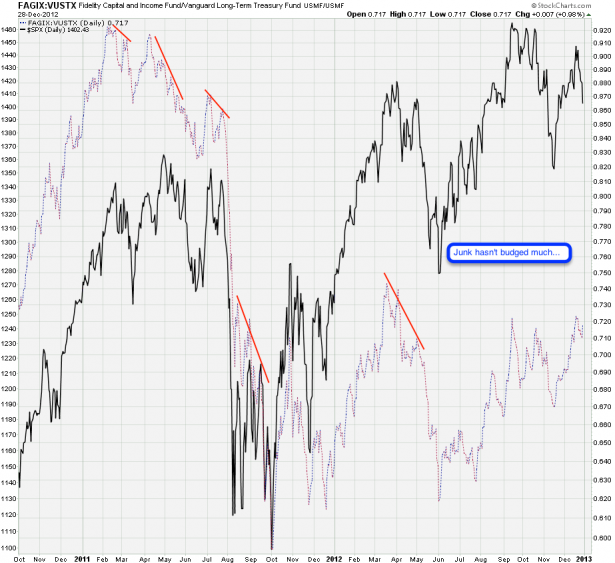 The one big fly in the ointment is the JNK:TLT ratio – here I’m showing you a close cousin the FAGIX:VUSTX which has not budged much. The JNK:TLT chart has dropped a bit more but quite a bit less than equities. So this makes me wonder as this one usually has not let us down. Let’s keep an eye on this over the next two weeks – I’ll be sure to provide an update. 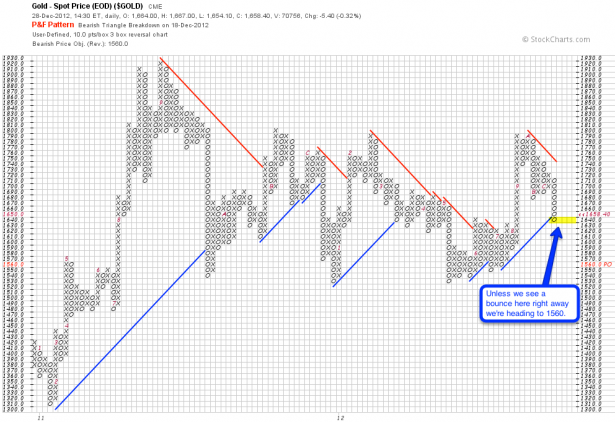 Some P&F updates. Gold is dangerously close to slipping off the plate. If it fails 1635 then we’re going to 1580 or lower.

Crude looking very positive on the other hand – if you drive an SUV you may not be happy to hear that we seem to be primed for our bullish PO of 99. Great combo – a possible fiscal implosion combined with rising crude (and gas) prices. Talking about a recipe for disaster. 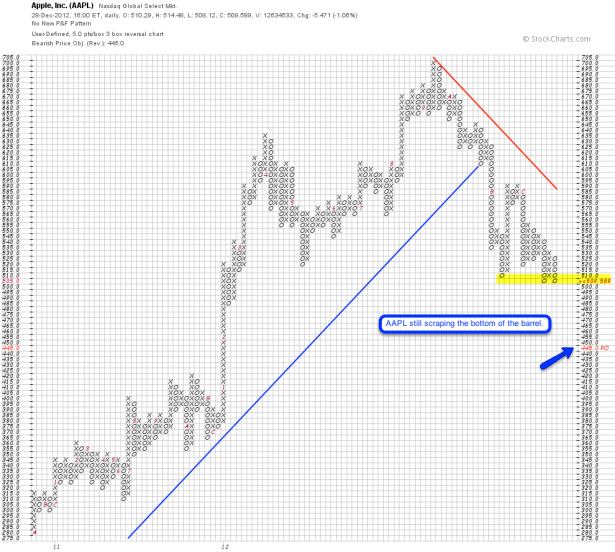 AAPL – our canary in the coal mine – is back at the bottom of the barrel. Despite recent hoopla the 500 mark separates it from a visit to 445 or worse. Maybe that jack ass at the genius bar won’t be so arrogant next time I drop a small fortune at their Grove store for evil computing ware. 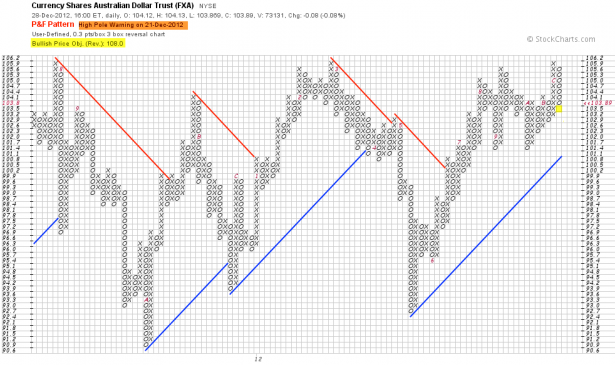 Finishing up with FXA – we seemed to be on our way to our bullish price objective of 108 and then reversed just two handles below. Now we’ve got a high pole warning in place which means the bulls are being put on notice. I think a drop through that diagonal support line near 103.5 drives us lower and would trigger a bearish price objective. 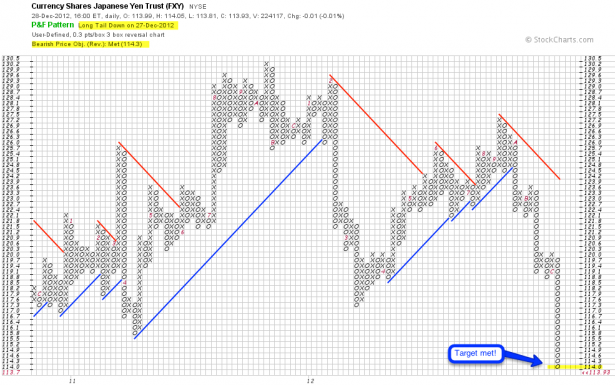 A quick reminder that the FXY has now satisfied our bearish price objective of 114 and change. That was a rather outlandish PO just a few weeks ago and it’s almost eery how quick we descended lower. This is the reason why I use point and figure charts and we have nailed several price objective in the past year. Let’s hope we can keep that tradition alive all through 2013.

In case you don’t drop by tomorrow – let me wish you all a safe slide into a prosperous, healthy and happy new year. Don’t party too harty now and most of all – don’t call me if you need someone to post bail.