The Fed admits to the economy still sucking balls – it’s only been eight years guys, what did you expect. And in other more cheerful news the sky is expected to remain blue until further notice. The long term outlook on gravity also is positive. Yah, thanks – tell me something I don’t know.

So if you’re still a bear listen to me now and listen to me very carefully: Stock up on more vaseline as you will need large quantities of it should you continue attempting to short equities. Unless you have less than three brain cells to rub together it’s rather simple to understand how this is going to play out.

This entire QE game and the global currency race to the bottom has now devolved into the following script::

Let’s face it – the Fed is incapable of hiking rates, at least during this decade. As soon as they do the Dollar is going to explode and they are barely able to contain it as it is. Which in turn would completely eviscerate the U.S. economy and perhaps even crash equities markets worldwide. If you think you want to see this happen, think again. 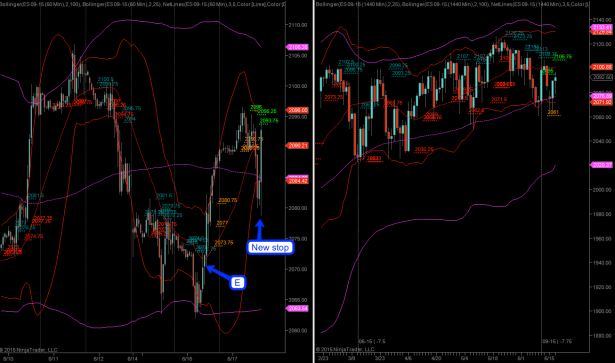 So we did a pretty good thing yesterday morning getting exposed long near 2070 – and if I say ‘we’ then I mean Skynard, a few other hardcore rats, and yours truly. Which is probably the total of all retail rats out there holding long positions – I bet you someone else’s money a ton of people went short and are probably still holding. SuCKers.

Alright – there’s no predicting what’ll happen next but I’m going to move my stop up to today’s big FU spike low near ES 2078. Then I’m going to grab a glass of good Spanish Rioja and watch the ensuing squeeze whilst practicing my evil laugh.

If you want to tag along here’s a training video – feel free to post your own.