Equities stared down the abyss this morning and then decided to take a step back as life may yet be worth living. So my condolences to all you perma-bears who yet again expected the end of the world as we know it. Please forgive my sarcastic tone but whenever ZeroHedge and its like switch into fifth gear and panic among retail traders hits a fever pitch, that is when I operate the best. Visions of samurai Mole mercilessly but calmly swinging his katana come to mind.

Look folks – emotions and mental masturbations – please leave all that to the losers. There are a ton of them, which is why their collective voices have a tendency to drown out any uttering of reason and reality. Trading is a zero sum occupation and every once in a while it’s time to for a trip to the slaughter house. Make sure you are not on board.

I yet have to understand what the big deal is. Yes, we are $14 Trillion in the hole – yes, we as a nation are screwed – and yes, most major banks across this blue marble we call home are fiscally defunct. The king is just not wearing any clothes – he’s streaking across campus! But shouldn’t that be clear by now? I mean, after years of kicking the can down the road, did it really have to come down to some artificial debt ceiling deadline for the markets to decide that being long equities may be a bad idea?

Give me a break!

Never ever forget what this is. It’s a finely honed game – one that is designed to separate you suckers from your hard earned coin. There are many participants: the Fed, the Wall Street power houses, the media pundits, the financial ‘analysts’, the rating agencies, the ‘economists’, the gurus, the wizards – it’s a bit like a cast of characters right out of Lord of the Rings! They all have their role to play and everyone feeds off each other. The house of card we have built is just that – an illusion that has a nasty habit of falling apart every few decades or so. Don’t you read history? Why would you expect anything else to happen this time around? The game is rigged and we all knew it before we decided to participate. So let’s treat it as such. When you go to play in Vegas – you know exactly what you’re in for. You can bitch and complain when you lose your last penny but they’ll kick your sorry ass on the street all the same.

So, if you’re looking toward the financial markets to reflect any sense of reality, please don’t kid yourself. What’s happening out there in the streets and what’s happening in the tape are two completely different pair of shoes. Once you understand that lesson and free your mind you will find yourself mentally liberated and able to finally see things for what they really are. The rules of physics and mathematics can be discussed and debated until the end of time but all the while they remain immutable, no matter what you or I may believe or not. Throw a rock up in the air and watch it fall back down every single time – no matter how much you hope it just once may not. 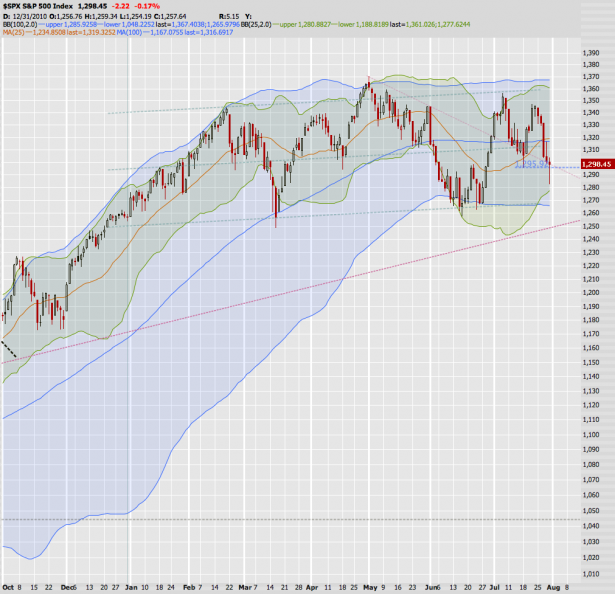 After scaring the children overnight and in the early part of the session we are now back above that diagonal which the longs have been clinging to. Was that it? Maybe and maybe not. There’s a lot of emotion in the tape, which is not the time for long term speculation. I can understand how it’s fun to drive the tape down on fumes and then collect on the way up – however, we just tickled the beast and the longs best not wake it up. 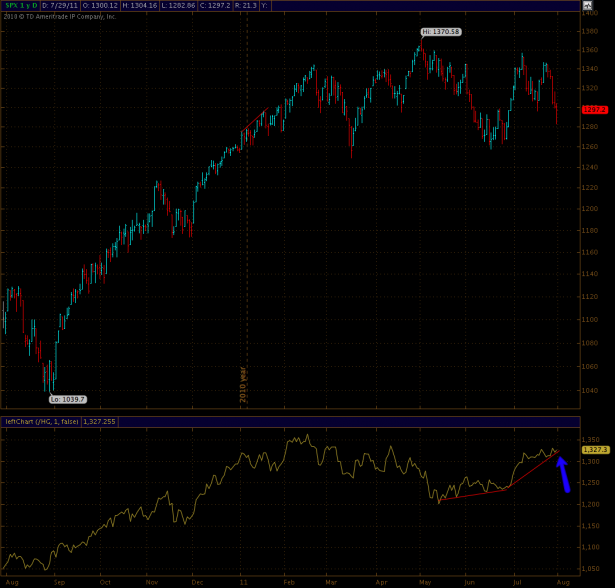 Copper still holding steady above that trend line. That’s non-confirmation – perhaps this time it won’t matter. But if I start doubting my charts then I have to decide to step away and remain in cash. Let’s never ever give in to emotion. If this chart is correct then this is one huge long opportunity. 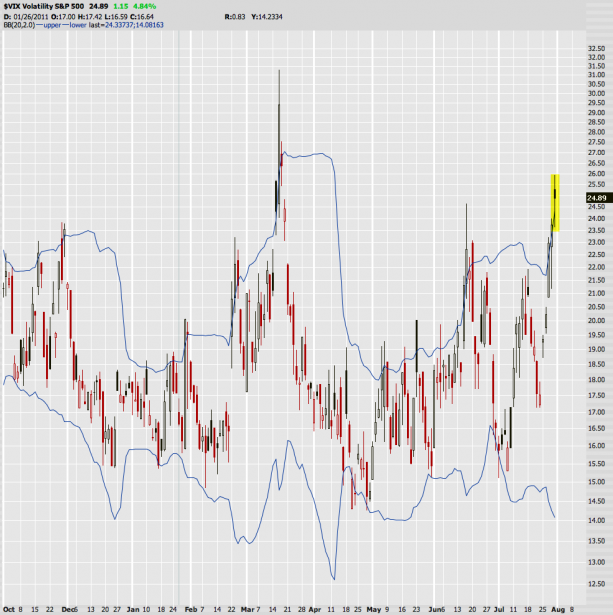 If you decide to go long today – do yourself a favor and keep in mind volatility. You don’t want to be long vega here, no sirreee. When playing options – use vega neutral spreads, or I promise you that your premiums will get killed. 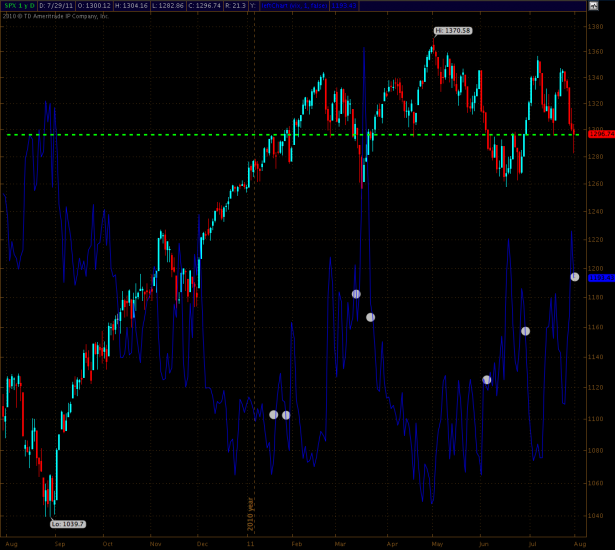 Volar put up his most excellent VXV:VIX ratio chart. Here’s another way to visualize his point. I drew a line at the most recent times when the SPX was dancing around 1297 – note the correlating VIX plots at those times. Take home message: It’s fair to say that things are rather emotional out there, which is not when you start selling. 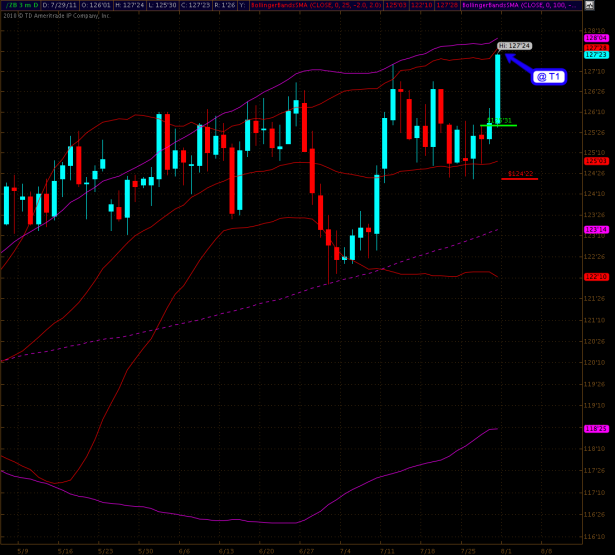 Boy, what a move on the 30-year – that was rather quick! But let’s just state for the record that the close above our NLBL predicted a push toward 127’00. Yes, it pays to be a sub at the evil lair! 😉

Of course I have a few more goodies for the subs:
[amprotect=nonmember] Charts and commentary below for anyone donning a secret decoder ring. If you are interested in becoming a Gold member then don’t waste time and sign up here. And if you are a Zero subscriber it includes access to all Gold posts, so you actually get double the bang for your buck.
[/amprotect] [amprotect=1,13,9,12,5] 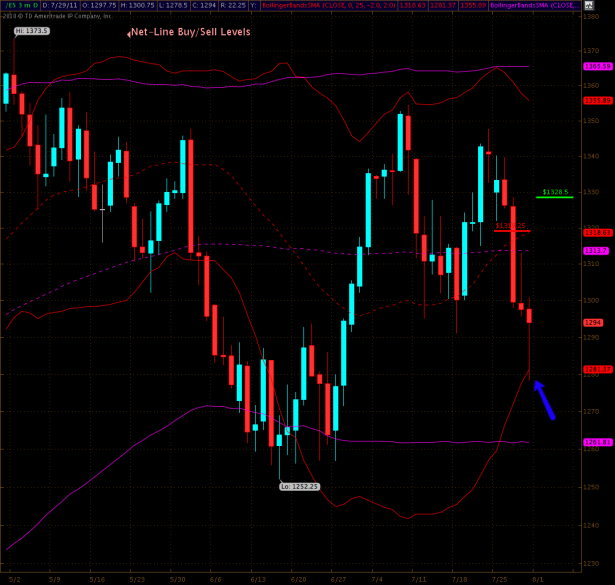 The daily net-lines spoos chart shows a nice bounce right at the lower border of the 25-day BB. Heck, that’s why we use them – over and over they serve as great target zones. 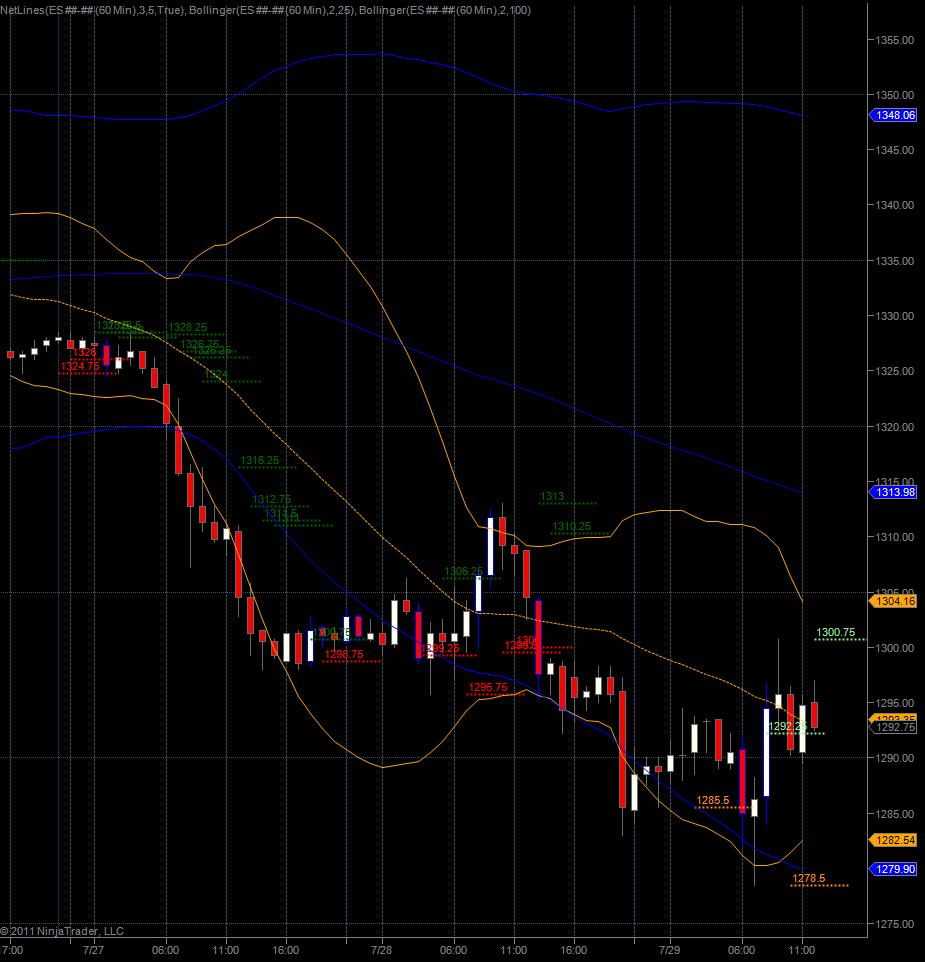 On the hourly spoos we are holding above that hourly net-lines at 1292.25. That’s also where the 25 SMA is posing some resistance. Suffice to say that we need to make it above that. A close above 1300.75 would be strongly advisable. Use these levels if you have brass cohones and are playing the swings. 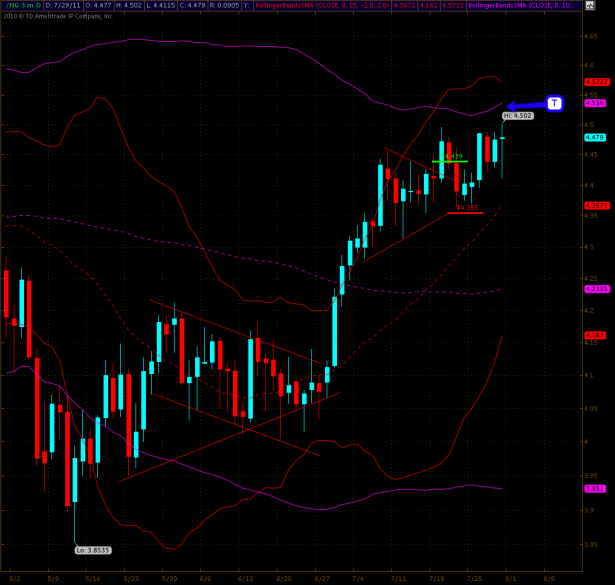 Copper has been holding steady, as shown above. Our NL chart points toward a possible target at 4.53. However, both BBs are now pointing upward and it’s possible that we slowly continue higher after a brief downside correction. 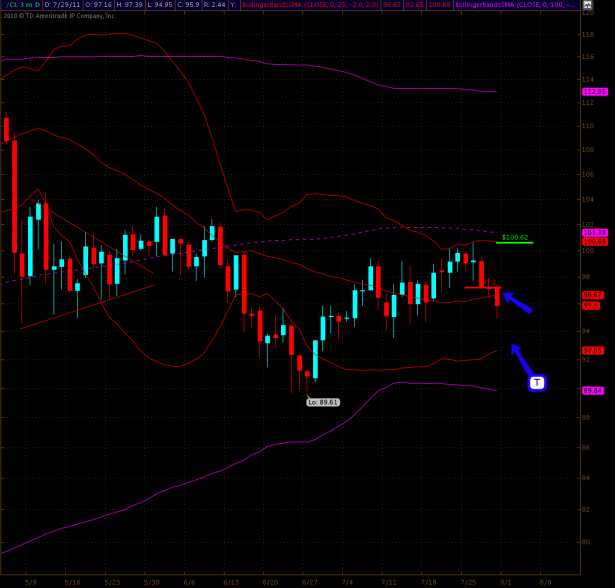 Crude broke below its NLSL and it’s 25-day SMA – so I am anticipating a drop toward 93. 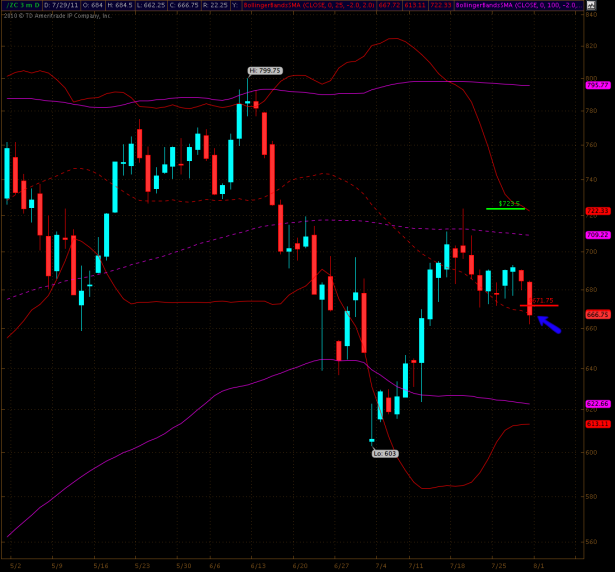 Similar situation in corn – although the 25-day SMA still is posing resistance. Once passed 623 would make for a nice first target. 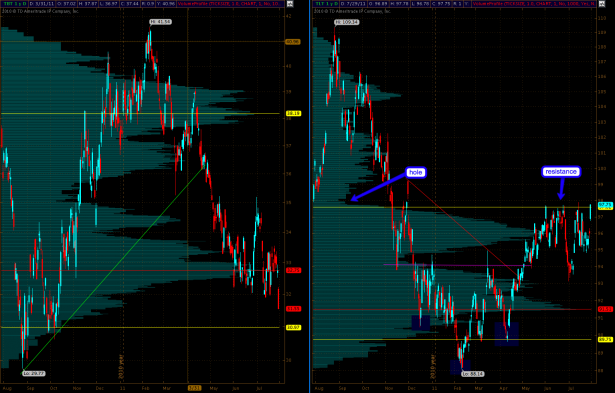 20-year bonds are heading into a volume hole – this is the TLT chart as well as TBT which is plotting a slightly similar pattern on the left. I don’t see much upside edge here, so if you were long I recommend you call it a trade and wait for instructions. 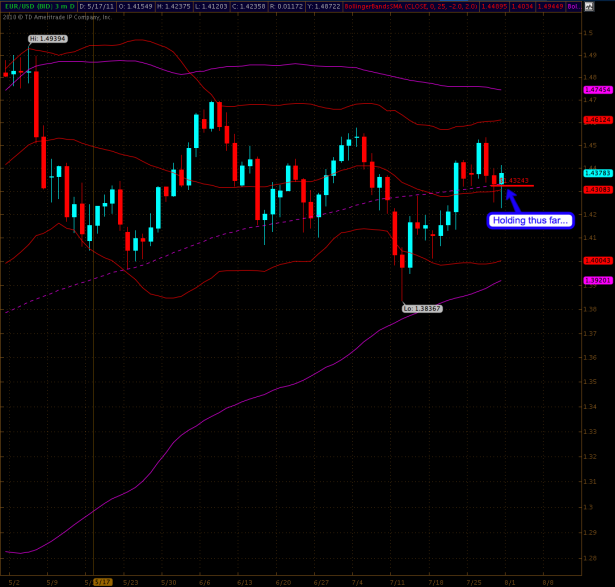 The Euro is holding above its NLSL thus far – as I said yesterday, a drop below those two MAs would be a bad thing for the longs – best to be avoided. Long positions here can be nicely protected with a stop slightly below those two moving averages.

That’s all I have for now. Enjoy your weekend!