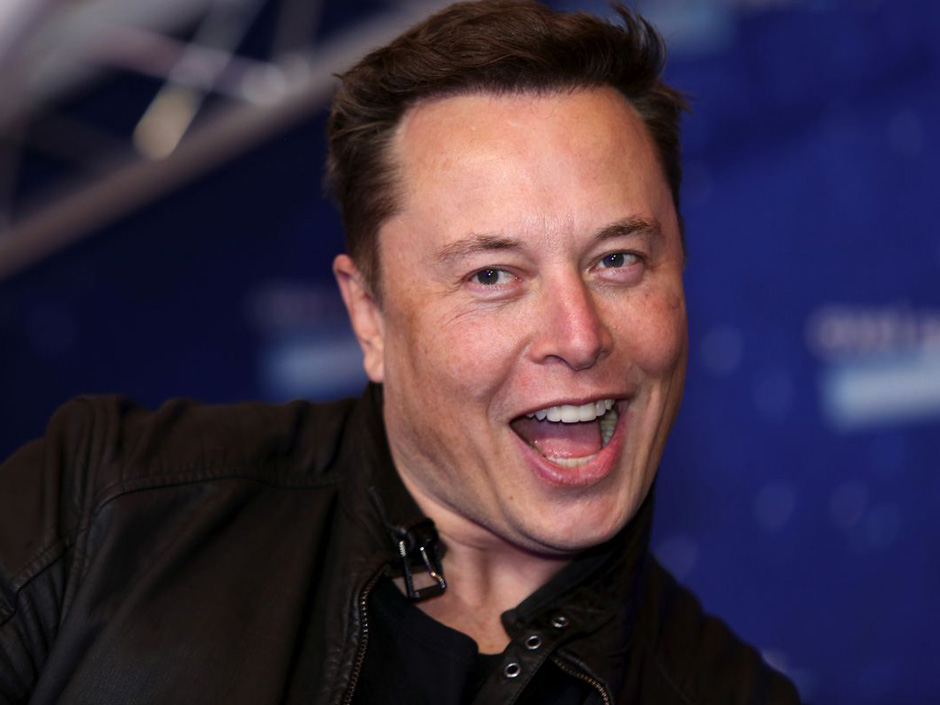 A few weeks ago an email arrived that put a huge smile on my face. No, it wasn’t a notification from the lottery association telling me that I had won a nice chunk of change. I’m pretty sure one actually has to buy a ticket to win something. And unfortunately no wealthy relative or close friend has died recently (what are you guys waiting for??), strike two on that one. Nope, instead it was an invite from Starlink announcing that my region had just qualified for pre-orders, and to be honest for me that’s almost as good as a golden ticket.

And pre-order I did of course. Now you may be wondering why the prospect of satellite based Internet would get me all hot and bothered. After all I enjoy high speed fiber right here in Valencia and it’s been super stable with perhaps two outages in the span of almost nine years.

Compare that with one outage per month at minimum back when I used to live in the Hollywood Hills. The best excuse I ever got from the technician, who incidentally showed up three days later (FU posthumously Time Warner!), was that a squirrel had chewed on the cable. Pro tip for you guys working at home: make sure you remain on good terms with all squirrels in your neighborhood.

So if it’s not an upgrade in speed or reliability, what is the big deal? Well that’s pretty simple: Freedom to live and work wherever I please. Some people are limited by budget or family relations. Neither of those two apply to me as the kid is already out of the house (good riddance!!) and my income bracket allows me to live a pretty posh lifestyle over here in Spain.

But the one big limiting factor for me has always been availability. When I was young and still had a full hairline I loved living in the city given the various perks it provided (mainly great jobs and hot women). But now that I’m happily married and a big more rough around the edges I’ve grown to hate he city – almost with a vengeance.

Mainly it’s the noise to be honest – both during the day (obras) as well as during the night (I live in a party zone). Then there’s the pollution, which admittedly here in Valencia isn’t that bad if you count out that greasy spoon down the street from our house. We would actually have moved in 2020 but then COVID hit and our plans came to an instant stand-still. But at this point we are really itching to GTFOT.

Especially right now during the crisis there are a ton of amazing houses for either rent or to buy all across the Spanish peninsula as well as on the various Spanish islands, which are all gorgeous. The one thing that always has and continues to limit our choices of where to live is the measly Internet access you get out in the boonies.

Until now that is! Elon f..ing Musk to the rescue. Say what you want about the man but he’s got vision and we are now mere months away from being able to access broadband Internet from basically anywhere on the planet. Except you Canadians but you’ve got pretty boy Justin, so that’s something to console yourselves with.

And that means that I will be able to have my choice of literally hundreds of great properties that are available right now. Personally I can’t wait and neither can my wife. We’re actually thinking of getting a goat and building a chicken pen. I love chicken – not only are they are cute but they top it by delivering fresh eggs for free every day.

Paradise, and I won’t be missing the city for sure. I guess that means I am officially old now. Touché! 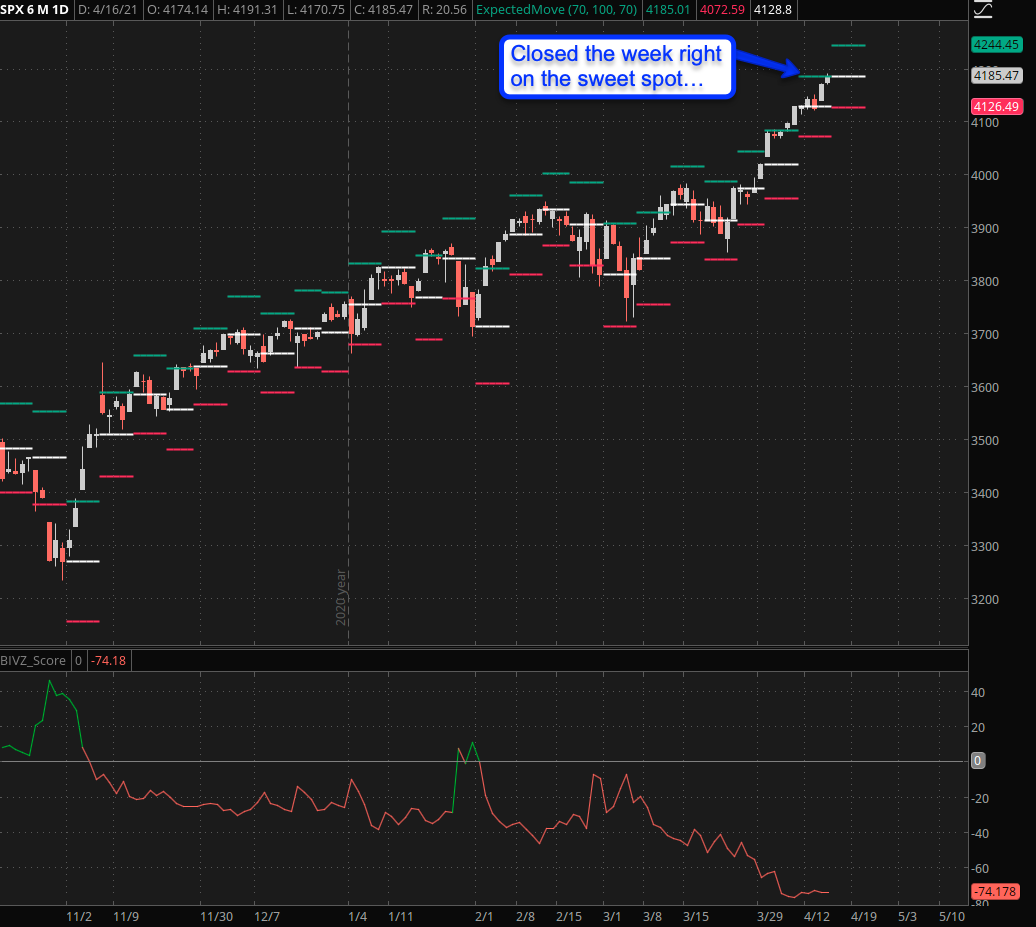 Okay that was a long intro – thanks for bearing with me. Let’s talk business and we actually have a lot to cover and with 30 mins to go until the bell I better get a move on. 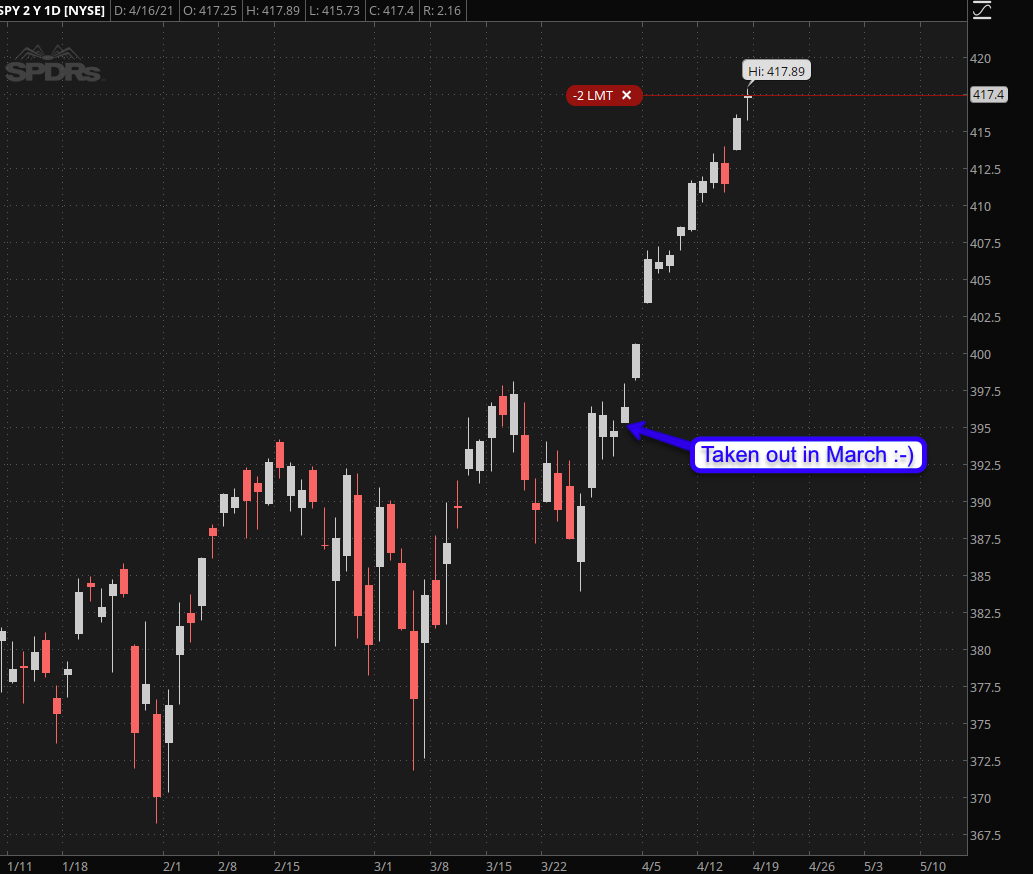 First order of business is the EM range which once again was NAILED last week – right on the sweet spot. Unfortunately I had picked the other one (further South) so no cookies for the Mole on that one. However I did finally dump that call ratio backspread I had bought over a month ago for a whopping $16 in premium (that’s $1600 per contract and I held a couple). 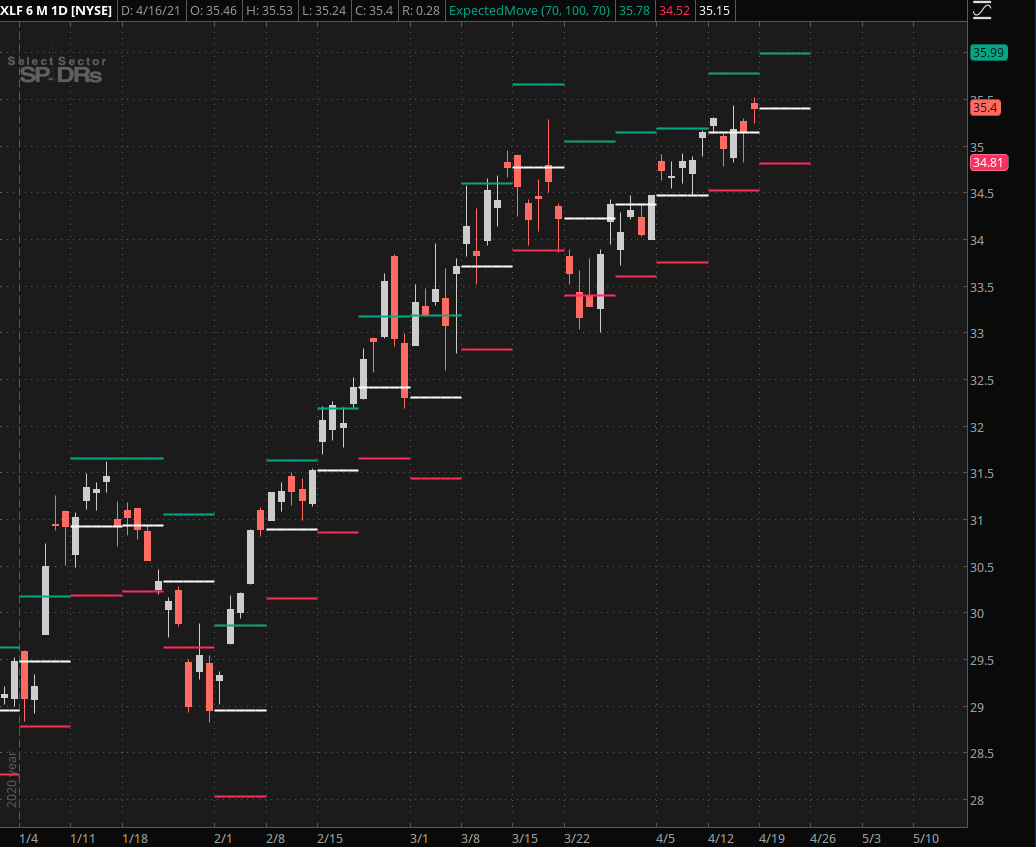 So given that the S&P is once again near or at ATHs the question remains: What is chasing this nutty tape higher? It’s not the squirrel apparently as it’s too busy chewing on Internet cables.

It’s  not the financials either, which continue to look robust but nothing to write home about. 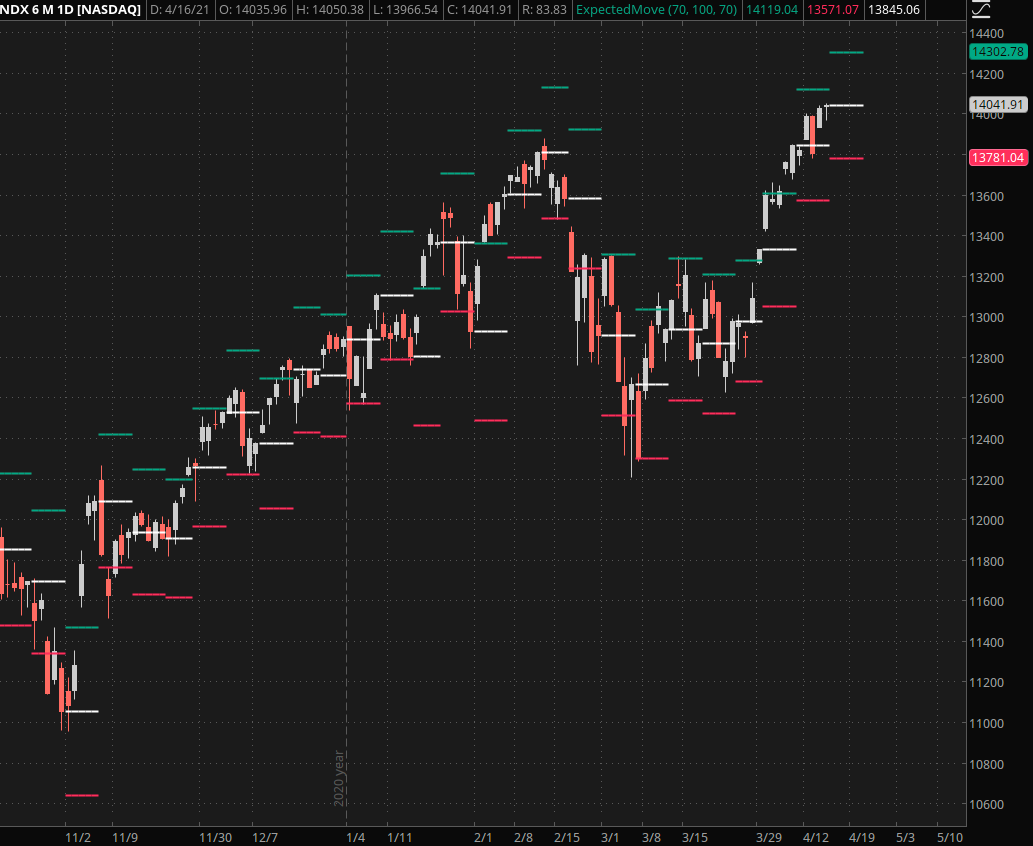 So what then? Tech? Nope – again, as a whole they are holding strong but were not super impressive last week. 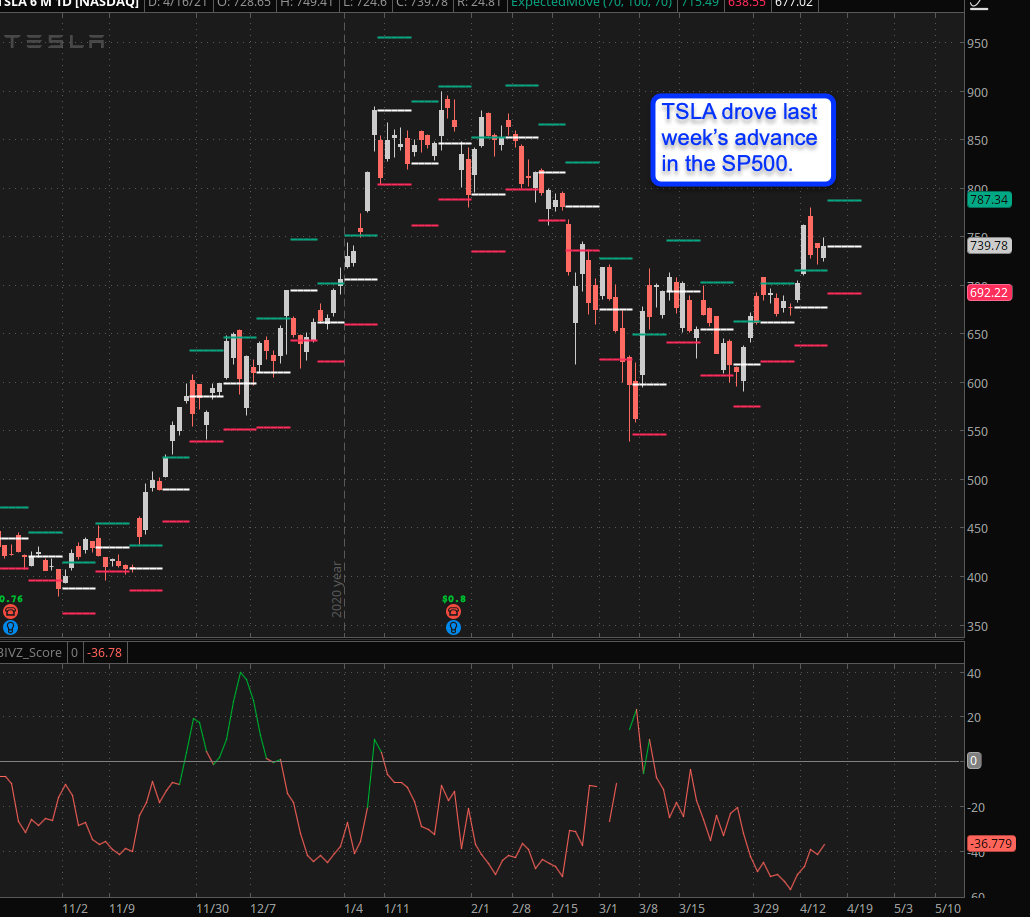 Well we were actually close looking at tech. In fact it was mainly TSLA that was punching this market to ever more lofty heights. Everything else is sort of tagging along for the ride.

So I guess Elon Musk is not only deploying a web of literally thousands of satellites into low orbit, but he’s also driving the entire stock market now.

Let me just take a moment and state that I for one welcome our new benevolent tech overlord, and that any allegations of me ever having shorted TSLA are completely unfounded.

Alright with that out of the way let’s talk IV and some juicy entries for the week. As you can see IV is now scraping the bottom of the barrel and that opens up a whole host of opportunities on the options front moving forward.