Today’s post is dedicated to Scott Phillips, our resident enforcer and part time debt collector, who seems to have caught a bad break after what appears to have been a series of hare-brained decisions involving a mysterious Asian flu strain, mixed with over training, which was then exacerbated by excessive consumption of some long expired low cost GMO protein powder and unlabeled pain killers he found in some dirty dumpster around the corner. All of which combined of course put him straight in the ICU with acute kidney failure just a few days later. He’s actually lucky that he’s 10,000 km away as I feel tempted to personally come down and take him out of his misery for not taking better care of himself.

However on the upside, this may be a good time to borrow a large sum of money from him as repayment terms may just turn out to be extremely favorable. Hey – don’t pretend you didn’t already think of that yourselves, you sanctimonious bastards! Now don’t worry folks, I’m sure he’s in great hands as I have read nothing but good reviews on the Thai pet clinic they’re treating him in. Now Scott – if you’re reading this: In the name of all evil the steelrats and yours truly we wish you to…. harden the fuck up, you damn pussy!

Of course I’m kidding folks, the poor bastard has really hit some hard times. Which however isn’t keeping him from trading on his death bed, now THAT is what I call dedication, people. Spot on mate! The video above features an update on his condition plus some trading advice I’m sure you will find most valuable. Feel better mate, we’re all rooting for you! 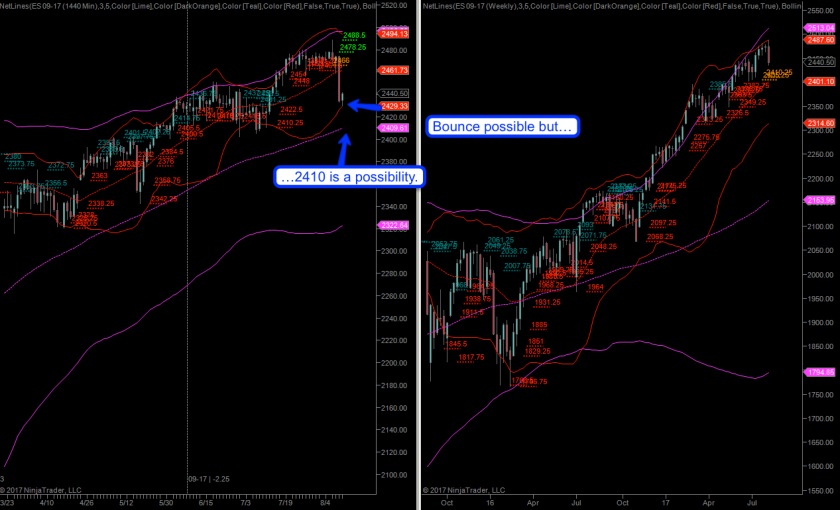 Alright, he probably dosed off by now. Just between us – I say he’s pretending, so let’s move on. Equities continued downward yesterday with only one single haphazard attempt to reconquer VWAP which failed ignominiously. A bounce here is possible and we’ll have to assess the situation after the first hour or two today. If we see more red candles today and no green close at the end of the session then 2410 is where I would expect buyers to put up their first line of defense.

DVOL on the NYSE was vastly outpacing UVOL yesterday and even the Zero indicator painted a pretty solid negative signal which spiked to -1.5. So selling was continuous and not just driven by a few bot farms from what I can tell. 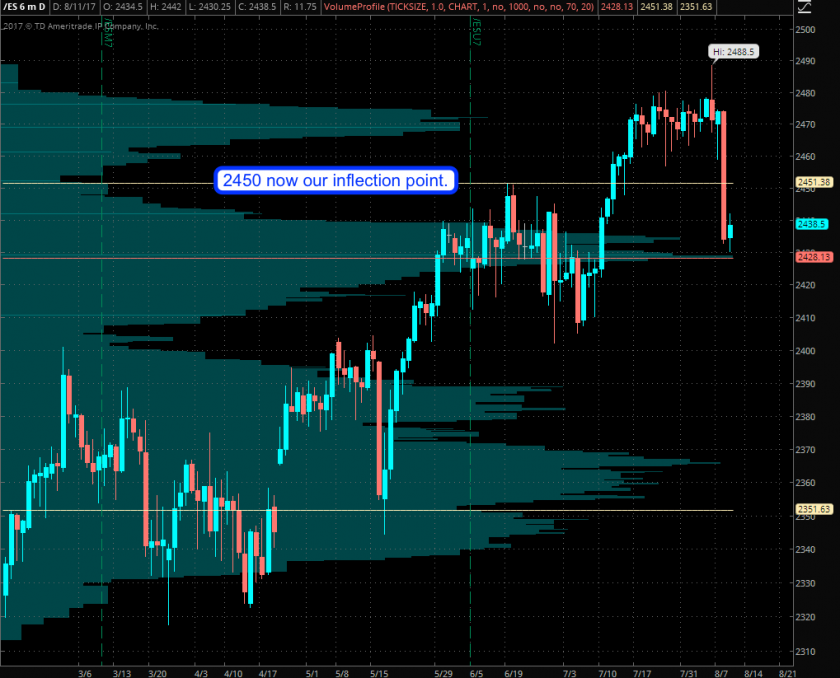 The volume profile now has us below the volume hold centered at 2450 and the next one starts at 2410 which also lines up with our 100-day BB on the chart above. I think the odds for at least a little bounce there are pretty high. But let’s see what happens today. 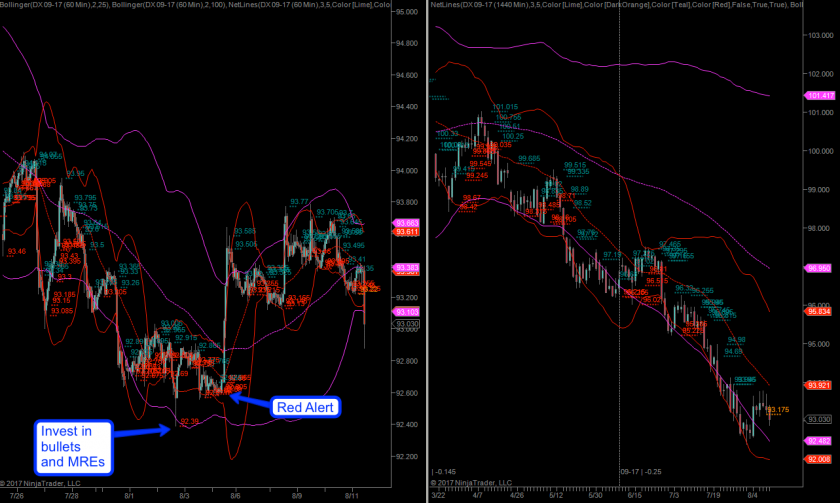 Before we get to the campaigns I wanted to quickly revisit the situation on the Dollar. After iffy CPI numbers this morning the odds for a late year interest rate hike seem to have dropped to about 35%. Which of course is not favoring the DX this morning. 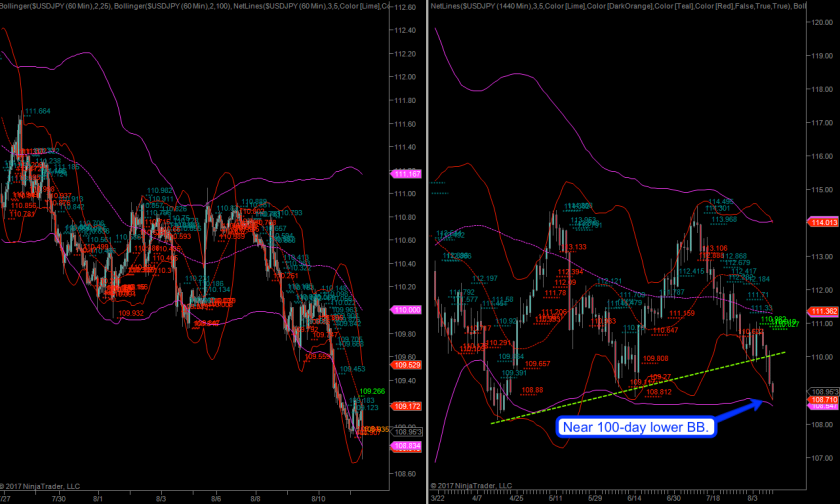 USD/JPY is now looking like it may just fall off the plate. This is usually where the BOJ steps in to stave off some damage but it appears their ballooning balance sheet has stirred up some push back arguing for steps toward ‘normalization’.  In other words, it’s possible that the Yen is going to keep strengthening here and that the BOJ will only step in once everyone panics and easing (cough printing) once again becomes politically viable. 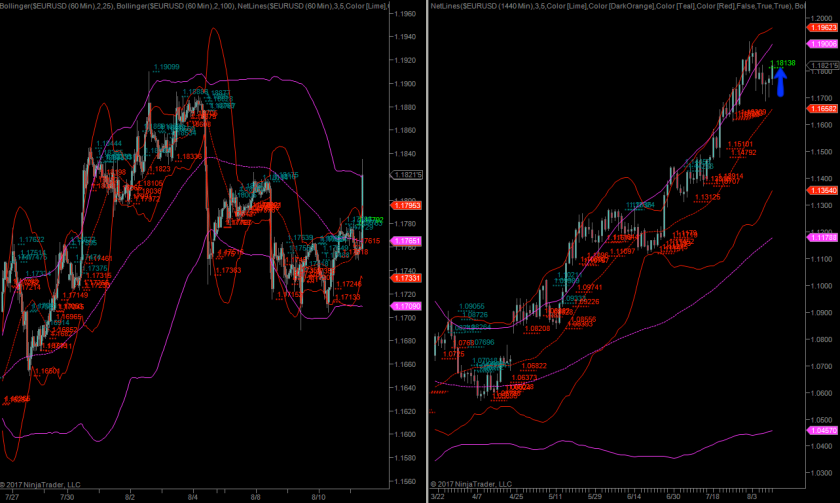 And of course my arch nemesis, the EUR/USD, is already busy making my life in Europe a whole lot more expensive. I pretty much saw this coming earlier this week and have hedged myself a little to mitigate the impact of more strengthening in the Euro. 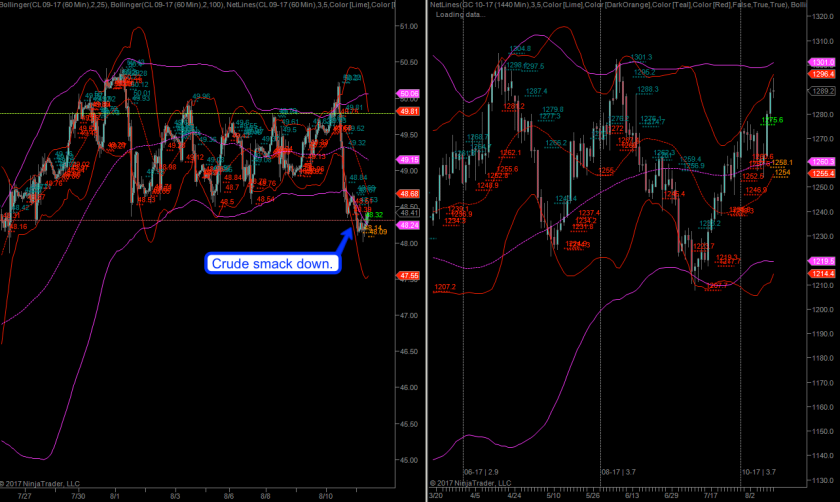 With got two runners and two losers today. Let’s start with crude which greatly disappointed as it was smacked down hard in yesterday’s session. Yes, just like natgas crude can be a cruel mistress – this one really looked like it was coming along. 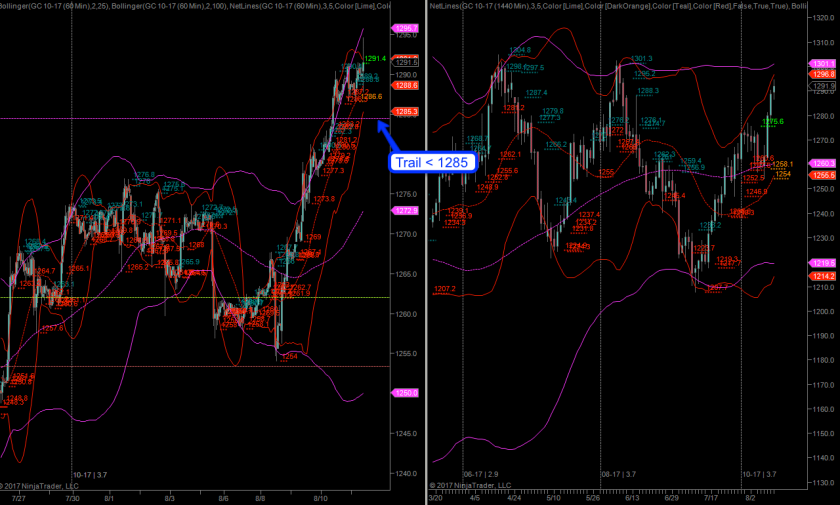 Gold on the other hand is blasting higher and I just advanced my stop to about 2.2R. I think a preliminary target of 1300 is now in the cards, which is why I keep on trailing it below each new spike low. 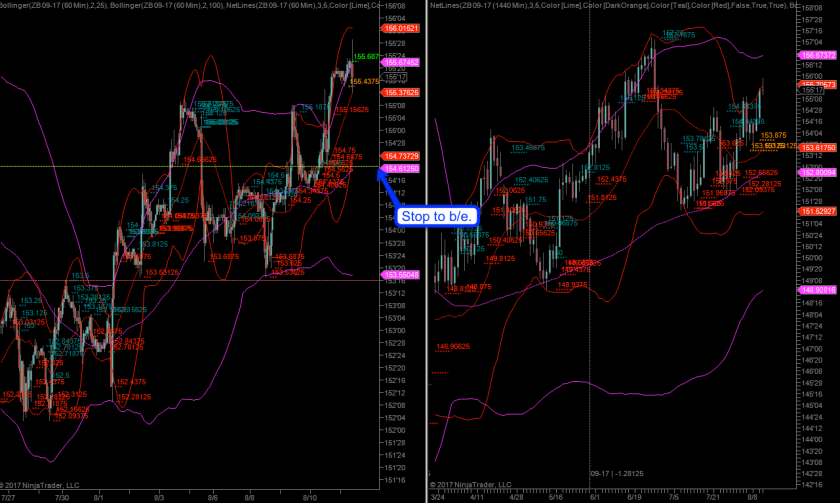 Bonds also getting out of the gate and I just moved my stop to break/even. This one does look very supportive on the daily panel, BUT so did crude and thus we’ll keep curb our enthusiasm for now. 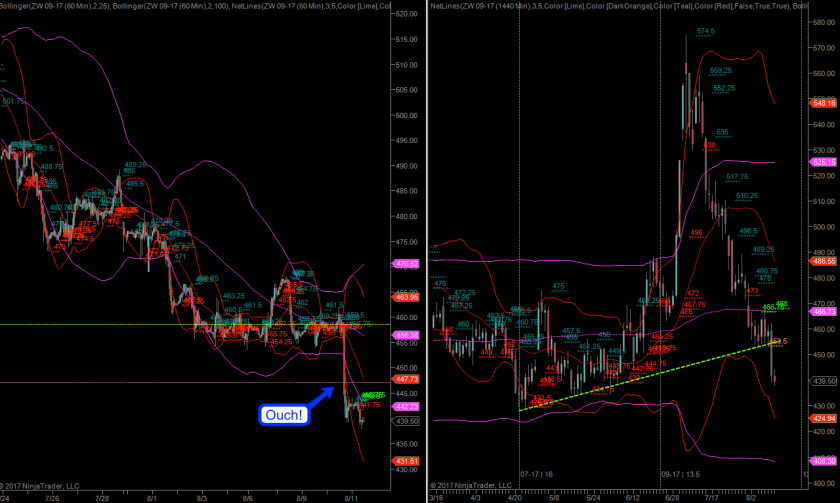 Wheat is the second loser, closely resembling what happened over in crude. I don’t see any valuable daily context here at this point and for now wheat is off the table until further notice. 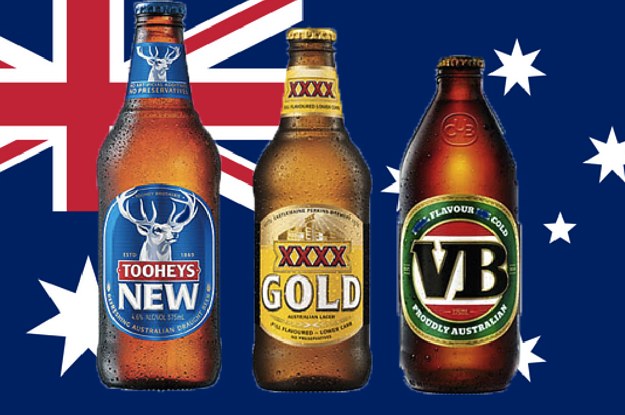 I doubt I’ll find Ozzie brew over here in Spain, but will be toasting one in spirit to Scott’s rapid recovery. Cheers mate!! Get better soon!