Have You Been Naughty?

Well, you know the answer in my case. Ho, ho, ho! The Santa Rally is officially upon us – as predicted by the daily Zero, the POMO chart, the VIX buy signal, Cramer, the Tooth Fairy, the ISEE… Ooops – right, that one has us in extremely overbought conditions but we have learned that this thing is usually quite a bit early – meanwhile more lambs are being led to the slaughter. Those concerns however shouldn’t keep us from feeling all festive and going out to shop shop shop – if necessary via that reserve credit card you’re paying 33% interest on. T’is the season!

I also have it on good authority that [now imprisoned] Julian Assange has some dirt on Santa and may release it right before Christmas. Aren’t you glad those trumped up sexual assault charges stuck? For a second there I was worried about having the season spoiled by inconvenient revelations.

Now let’s move on to some charts – after those December puts have been granted their final death knell I’m sure you all wonder where things may be heading next.
[amprotect=nonmember] Charts and commentary below for anyone donning a secret decoder ring. The rest of you guys will have to wait until tomorrow – sorry. If you are interested in becoming a Gold member then don’t waste time and sign up here. And if you are a Zero subscriber it includes access to all Gold posts, so you actually get double the bang for your buck.
[/amprotect] [amprotect=1,9,5,2] 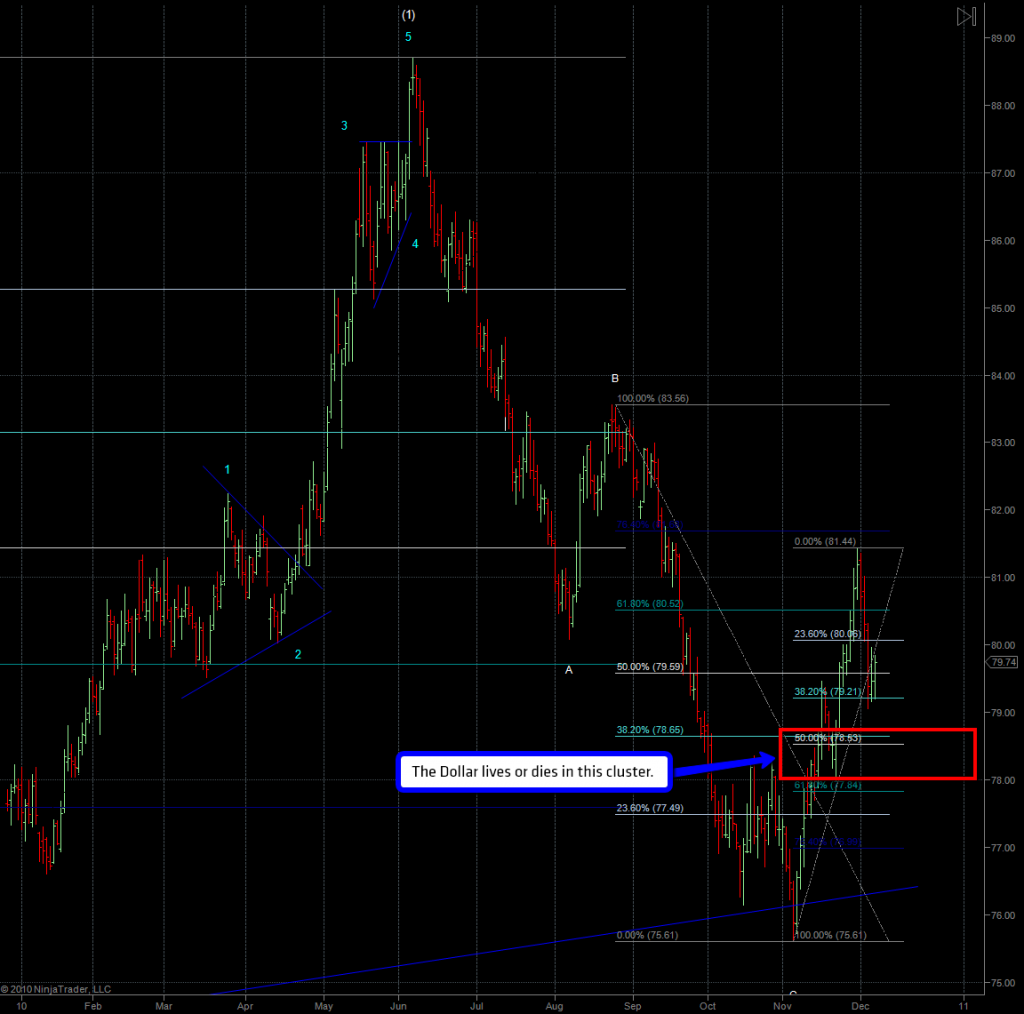 Let’s start with ole’ bucky – after much flailing around we are now nearing the moment of truth. Should the DXY drop below the 78 mark it’ll be a very grim 2011 for anyone holding assets in Dollars. Oh you’re broke after losing your job and basic living expenses ramping through the roof? Lucky you! One problem less on your list!

Seriously now – that cluster differentiates an a-b-c move (i.e. bearish) from something promising higher readings in the weeks and months ahead. I think the battle for ole’ bucky’s survival will be fought in the near future. 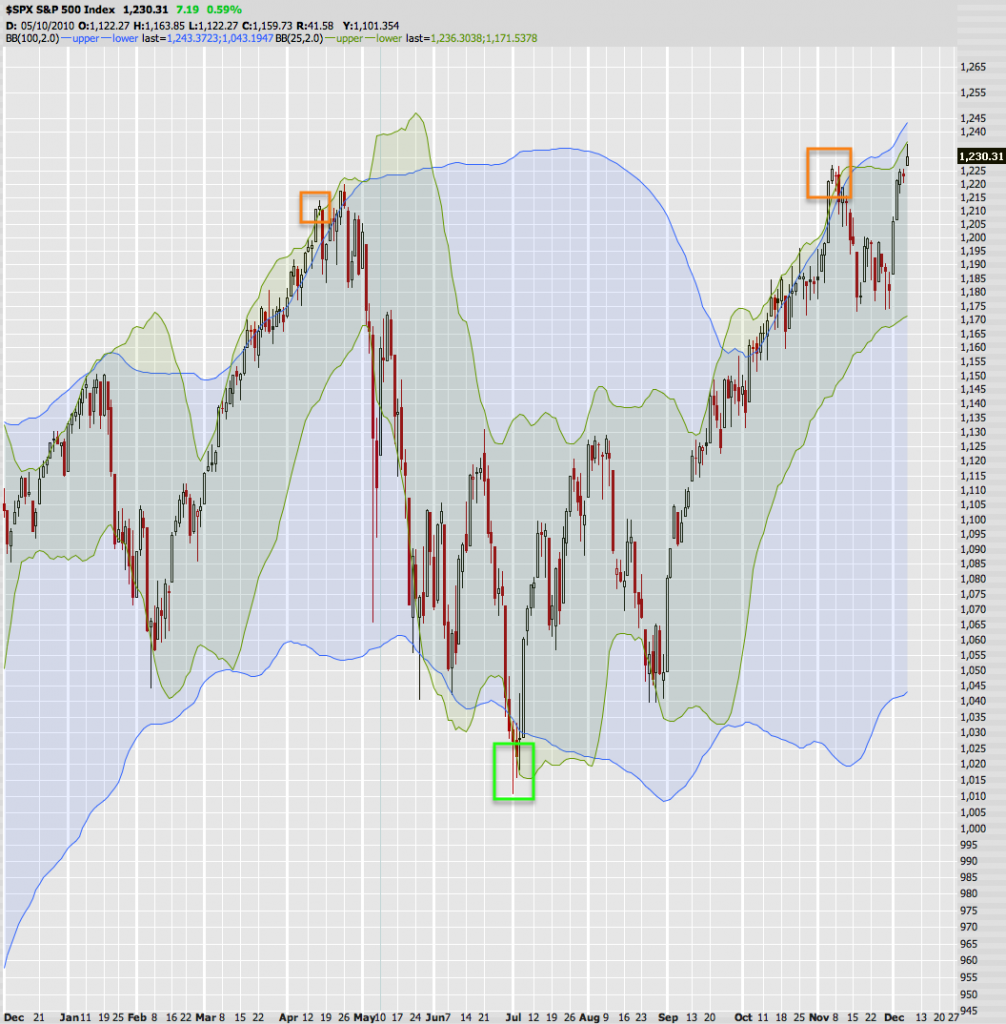 I don’t think I ever showed you this chart. It’s an old BB system I often refer to in conjunction with some of my other indicators. The sweet trades happen when the tape pushes into the gray – the 25d 2.0 BB is also a good bounce level. Anyway, the important message here is that those bands are pointing up and that roughly in the trajectory of prices. Which means that this ramp up could continue for quite a while longer – I’d say don’t expect much upside until early next year. 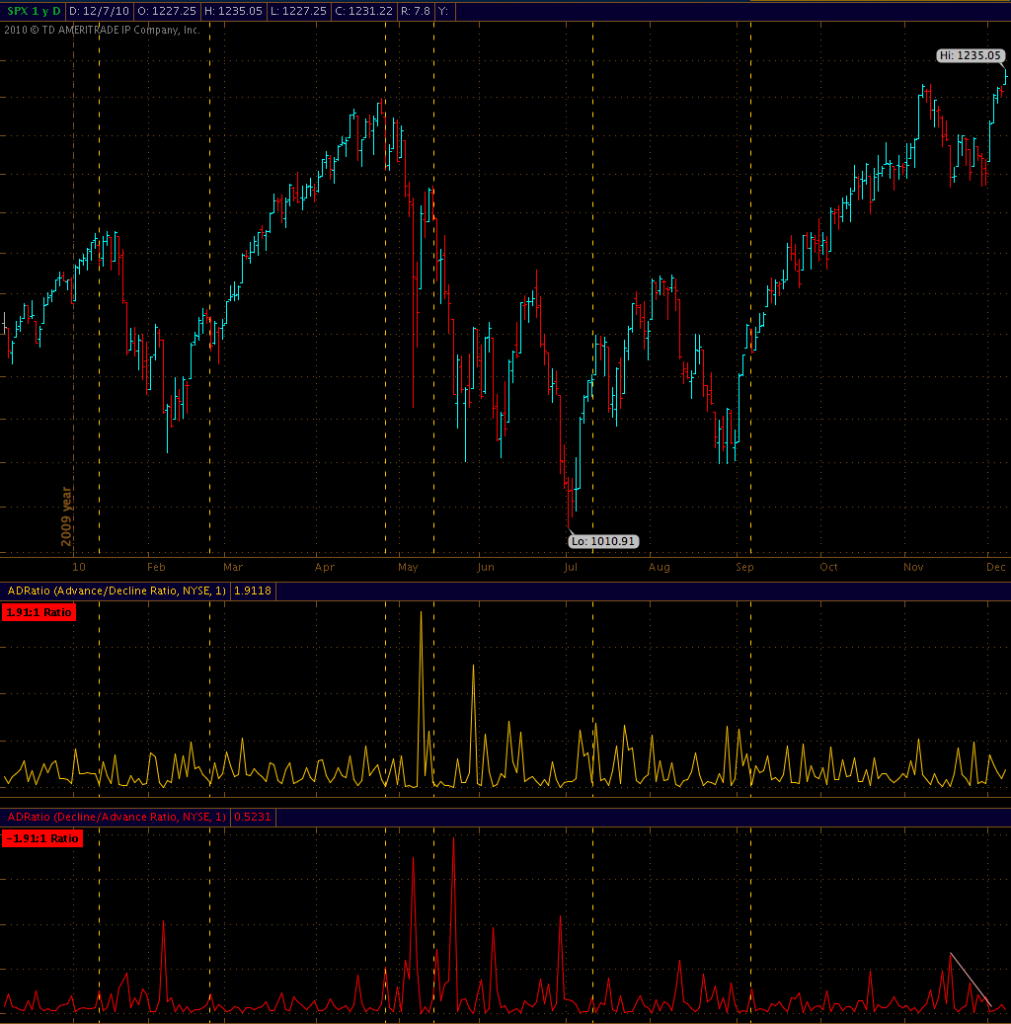 Something I missed on the NYSE D/A ratio (red panel on the bottom). Notice how the signal became less and less bearish as indicated by that diagonal that follows the signal down. Of course the fact that we were painting a floor at the very first 23.6% fib line was sufficient evidence that the bears had relinquished their mojo a long long time ago. 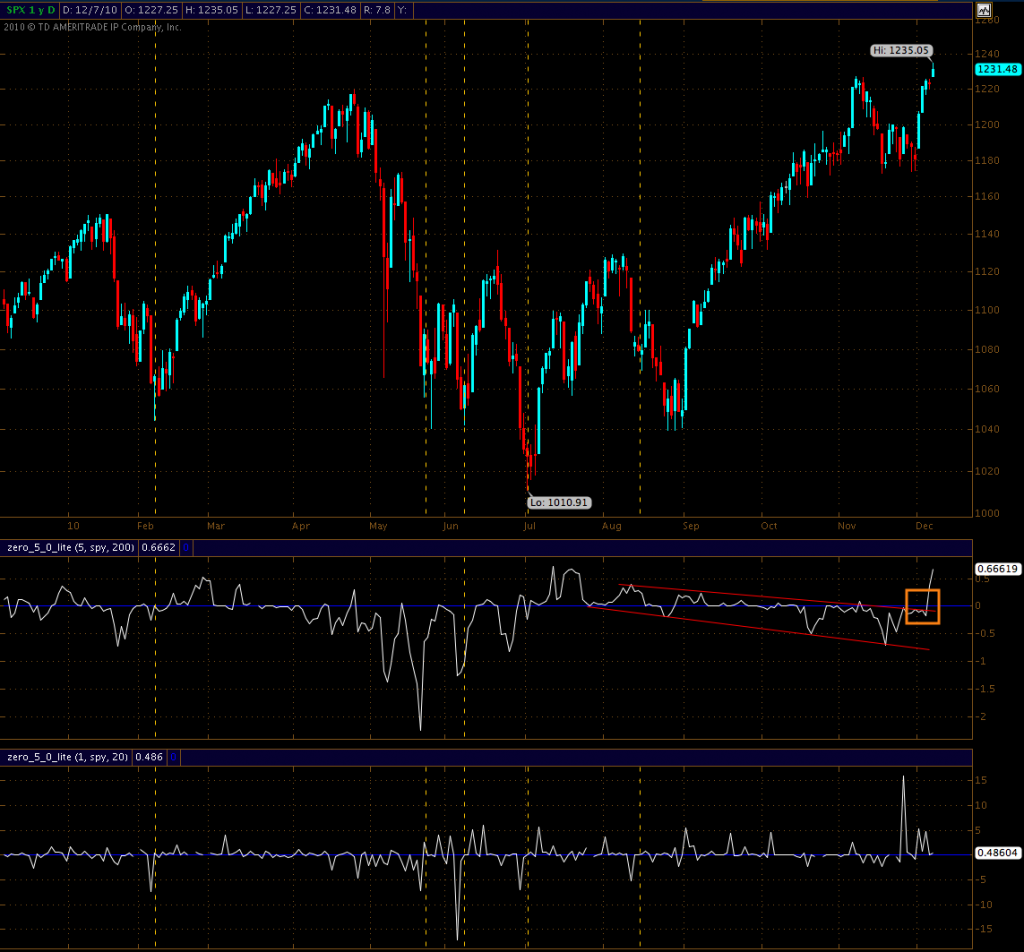 Many of you subs asked me about the daily Zero and here it is in all its glory. Quite obviously that trend line has been bu-usted and IMNSHO that seals the deal on what comes next. Although we may shake out a few retail piggies in the not so distant future I don’t see any significant downside ahead. Everything is pointing up right now – just in time for Christmas.
[/amprotect]

I am heading to Silicon Valley this evening and will return late Friday. Although I will be pretty slammed I will however chime in with quick updates – most likely in the late evening before I fall into bed. Now, please don’t expect anything extensive as I’ll only have access to my lappy – but quite frankly I don’t think that there’s too much to be said right now. Feels like the tape is on seasonal cruise control – overbought conditions be damned.

One more thing – there is a chance I’ll be heading to Korea again on Sunday. I’m however not sure yet and will let you all know on Friday or Saturday. Odds are about 50/50 right now. Quite frankly I’m not too jazzed about going – if you want to know why pull up a weather report – it’s nasty down there.