I’ve spent this weekend crunching numbers. This is to address the fact that most traders say they put on a higher probability trade, but very very few can say what the probability of another 1% move in the same trend might be. Yet, they claim to have an edge. If they are regularly profitable, I would agree with that – but it is not because they are able to identify high probability trades necessarily.

I’ve taken as my base, the 55 DMA (55 is a FIB number), because EVERYONE looks at the even numbers for moving averages – and if everyone is doing it, it is hard to come up with insights that might give one an edge.

The data history is the daily open, close, high, and low back to 1960. I began my analysis Jan. 3, 1961 to give enough trailing data to put in moving averages as I expand my analyses. I have even come up with a coding technique to identify the shape of a bar – hopefully to find relationships between trends, relationships to moving averages, and the shape of the bar in order to know how the next day might behave (the bar shape) within a certain probability. However, that is more involved and for another time.

What I have done is looked at how far away from the previous day’s DMA, the current day’s SPX close can get. It is like an elastic and at some point the forces to move back are stronger than the forces to move away. I have broken this information down by groups based on whether or not the SPX and DMA are widening (based on the slope from the least squares fit of 10 days of closes for each); and whether or not the slopes are positive or negative.  I have looked at the behaviour when SPX crosses the DMA in either direction, and I have also grouped this by the same characteristics.

I have already published my results for part of this research and was met with a virtual wall of silence which suggests that either no one understands the significance, or no one cares. Since I have changed my base date, here is that same data again. 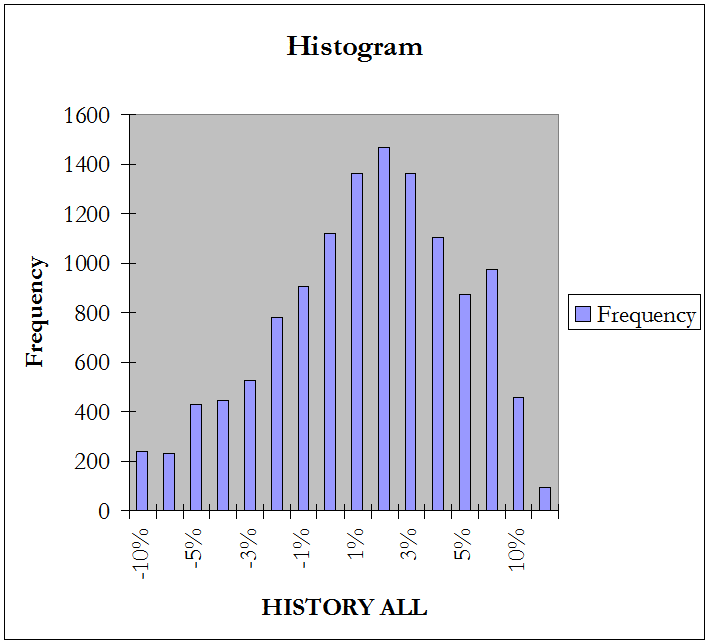 On Monday, March 1st, the SPX crossed over the 55 DMA. As of Friday’s close, it is 2.6% above the 55 DMA. The total history of the data suggests that there is a 32% chance of SPX going higher and moving further away from the DMA.

If I refine this and choose some somwhat arbitrary indicators such as widening or narrowing gap, positive or negative slope (10 data points) for SPX and DMA, I get a “111” = [widening gap, SPX +tive slope, DMA +tive slope]. Running the same analysis on just this condition suggests that there is really a 58% chance of SPX going higher. This is quite different and suggests that a short trade is marginally a better probability. Note that this does not refer to the next day, but until the “111” conditions changes – meaning SPX starts to move towards DMA, or its 10 day slope goes negative, or even DMA goes negative.

The SPX crossed above the 55 DMA on Monday, and has been there for 5 trading days. The data for how long before it crosses back below the 55 DMA is interesting. Of the 12,376 trading days in the sample, SPX has crossed over the 55 DMA from below  only 50 times [there are a total of 725 crossovers, not counting this latest, from either direction] – when both the DMA and the SPX are rising.

When the SPX crosses the DMA from below, and both are rising at the time, the SPX remains above the DMA for a max of 10 days for 60%  of the time. IF I do a back of the envelope calculation, and say that it takes twice as long to go up as fall down (I haven’t crunched the numbers so this is just a guesstimate), then SPX should turn down for a trend between Monday and Wednesday of this coming week – 66% of the time. I chose the 5 day threshold, because anything less is a headfake. So, IMO, this is not a headfake over the 55 DMA (even if this is stating the obvious in hindsight – it sure helps to have some numbers to back up the gut feeling). As well, what is the probability of a 2.6% down day? (SPX is 2.6% above the 55 DMA).

A more interesting point is that if SPX stays above for 15 days – then it will be up for more than 20 days – guaranteed based on the historical data. There are no 16 – 20 day occurrences of the SPX being above the DMA when it crossed with both slopes positive. So either it takes SPX more than 5 days to get back below the DMA, or it keeps moving higher. Here is the data: 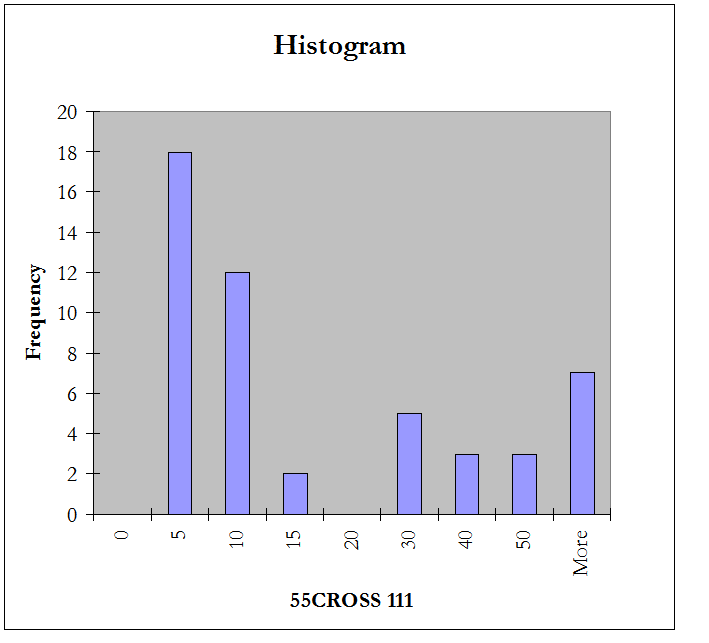 Is this tradeable?  I have a 58% chance of SPX going higher from here. I have a 60% chance that SPX will stay above the DMA for up to 10 days, and it has already been there for 5 days. I have a low probability of a 2.6% decline in 3 days or less (guestimate), but a higher probability of this happening in 5 days.

SPX could still turn down on Monday and continue down to cross below the 55 DMA. If SPX stays above the DMA for 10 days, then there is a high probability that it will stay above for 20 – 30 days – and may run. It could also come down and parallel the DMA for a while before going below.

So you see, even knowing the probabilities does not give an edge by itself. If this is put together with TA, then perhaps it could be more insightful.

Here is the return data since the beginning of 2007 – since volatility has gone up. You can see Taleb’s fatter tails that he bets on. 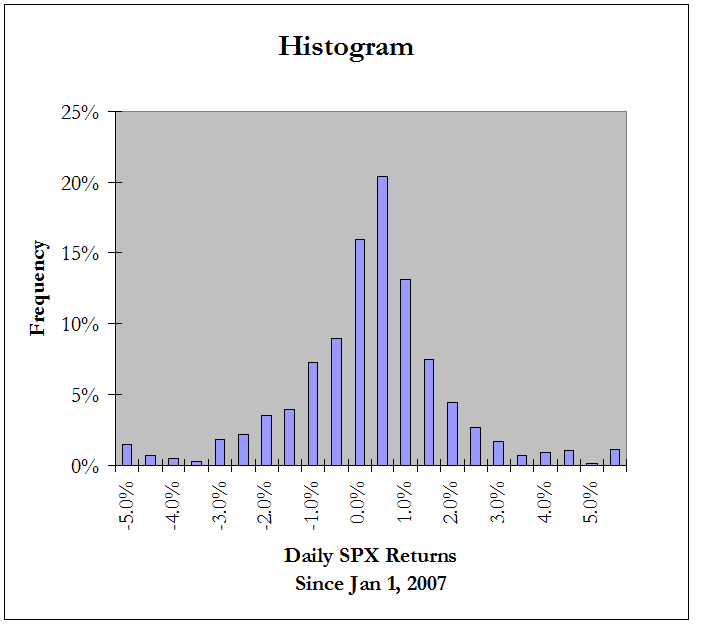 Here are the probabilities of a more than a 2.6% or 5% drop over various terms. I’m not a statistician, so I don’t know how to do the cumulative probability of these possibilities.  If SPX were to be 5% above the 55 DMA – assuming that the DMA move is small, it would be at about 1165. Once the SPX crossed the 55 DMA with both having positive slopes, the odds of reaching this level is 28.2%. I don’t know if that has increased by virtue of SPX reaching a level 2.6% above the DMA. Statistically-inclined persons please feel free to chime in. I took dta from the beginning of 2007 on.

I can say, from the TA, that SPX has crossed above the “since Aug 17” trend line. IF THIS TREND LINE is still valid, then I would expect a re-test before moving up more, within a day or two. If it’s not valid, then the TD resistance happens to be at what I’ve labeled the “Point of NO Return for the Bears”, which is SPX = 1150ish. This also happens to be the high from January. 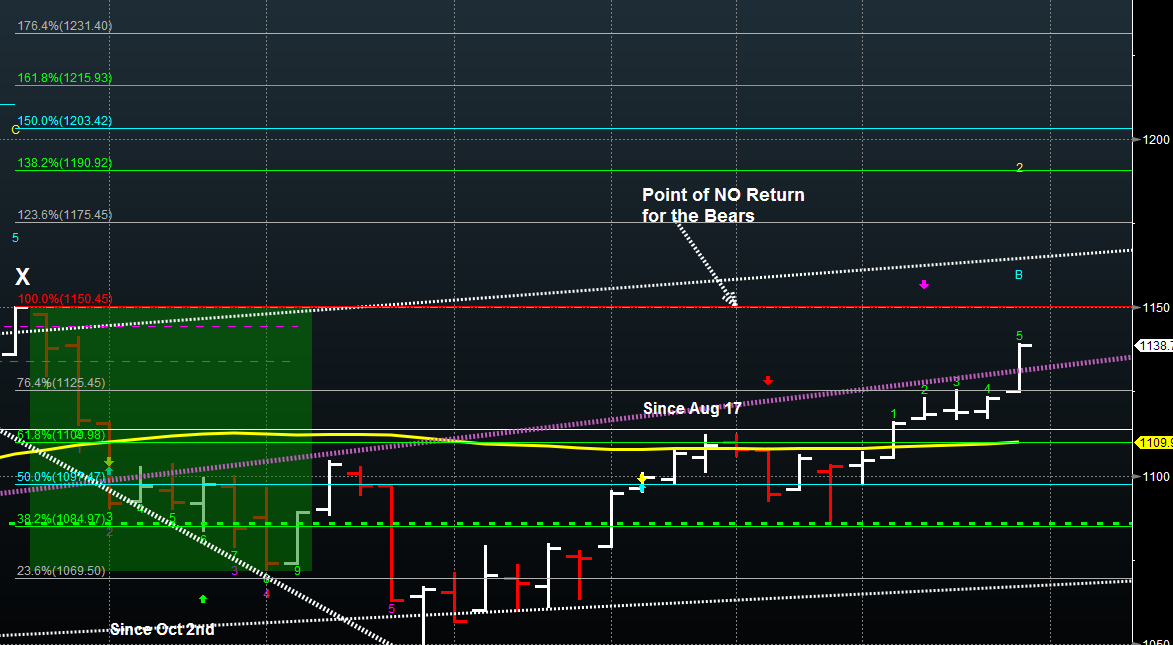