I poked around my charting universe and didn’t find anything worth reporting. Markets are pushing sideways across the board with equities hovering near their all time highs. I don’t think much is going to happen here this week but given where we are on the equities front we’re most likely are going to finish the year with a bang. Let’s take this opportunity to revisit the big picture. 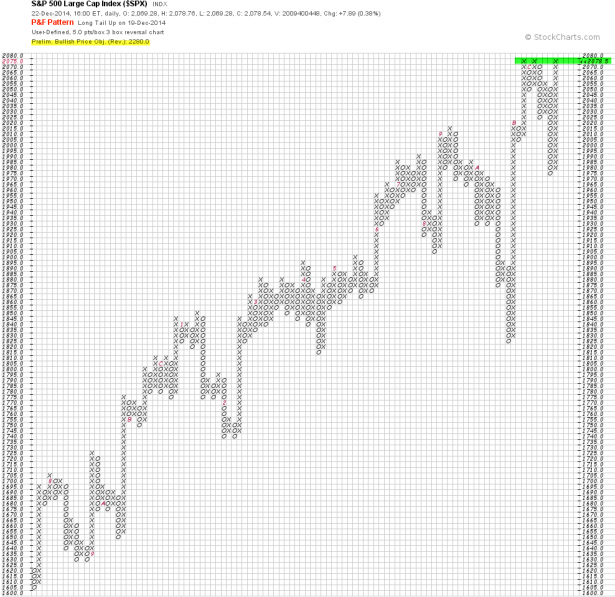 I think our point and figure chart really speaks clearly here, in particular as it focuses on the big picture and doesn’t concern itself with time, only price counts. In the past two months we have witnessed two medium term retracements, both of which however were mercilessly reversed in a fraction of the time that it took to produce the downside leg. Think about that for a second, consider what this tells us. Usually – meaning  over the past 100 years or so – the downside moves are known to be the most violent, retracing price advances in a fraction of the time it took to produce them. It’s rare to see the opposite happening – especially twice in a row.

And quite frankly it’s not the first time we witnessed a drawn out correction followed by a blazing fast recovery. Actually we are seeing a lot of ‘long poles’ on this P&F chart, which continues to speak to the strength of the ongoing trend. If you would turn this chart upside down then it would actually better fit the characteristics we usually expect. Resistance clearly is to the downside here and the ‘easy’ direction continues to be higher and higher. Given that the current bullish price objective of 2280 doesn’t really sound so outlandish.

Now we are parked right at an inflection point which has failed twice before. The odds suggest that SPX 2080 will most likely be taken in the coming weeks, be it in the coming week or in early January. However I do think that 2015 will be a difficult year for stocks, so be prepared for a bit of turbulence next year. This market phase cannot continue forever – it has already outpaced all of our wildest expectations, and the chart above suggests that we are heading for some type of exhaustion spike on the long term side. With the Fed wrapping up QEx in 2015 I think we are already riding higher on borrowed time.

Which should be great news for all of us and probably also for me personally. Quite frankly it’s tough to continue reporting on an effervescent equities market, day after day, week after week, month after month. Yes, we’ve had a great time playing the futures and the forex side. But the majority of you guys continue to be focused on the equities side and quite frankly I do enjoy seeing the comment section hopping. If I have one wish for Santa then it’s to finally produce a meaningful correction – one that lasts more than just a week or two. 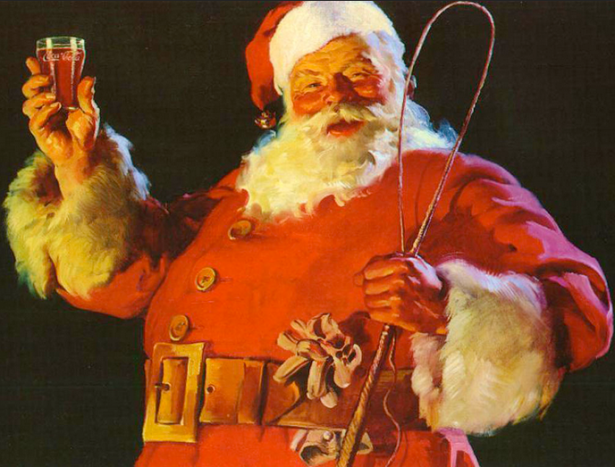 And with that sentiment I would like to wish everyone a very merry Christmas – if you’re not Christian (only about 70% of our contemporaries) then a special happy holidays goes out to you as well. It’s been a wild wild ride but once again we managed to eek out solid profits throughout the year by sticking with our charts. In comparison with a few years ago I believe we have come a long way and we all have matured. There was no other choice – we had to evolve alongside a business that has become a lot more complicated, much faster, and of course more global.

But I hope I speak for all of us when I say that we’re just getting started – a lot of good things have come to fruition this year. For instance Heisenberg was introduced into beta in December of last year and it took almost another whole year for it to mature into what we recently released as Thor. Scott and I have worked very hard and will continue to do so to squeeze one R after the other out of this market.

My sincerest thanks goes out to all of you loyal readers and supporters – you’ve been great and I hopefully this place continues to provide value to your daily trading activities. After over six years I still love running this blog and my final wish for Santa is that one year from now I’ll be sitting here again writing a Christmas post for all of you. Very special wishes and thanks go to my brother from another mother – ‘Convict’ Scott Phillips. You’ve been great and you’re always there when the going gets tough. Thanks for that. Now get back to work! 😉