How I Got Paid To Travel 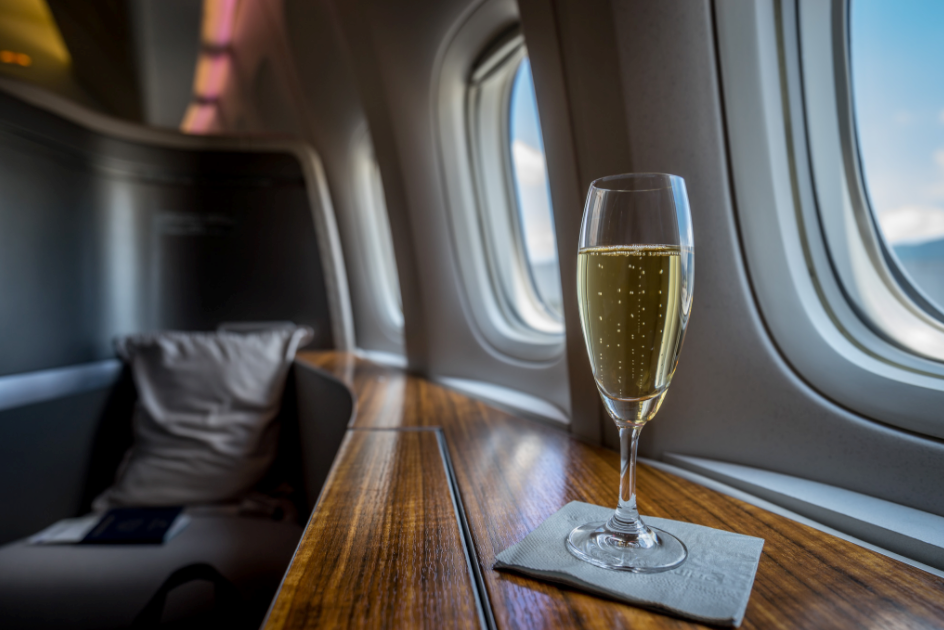 Please forgive the blatant clickbait but I’ll have to stir up participation a little after my pre-summer mini excursion into Austria and Italy. Plus it’s not 2010 anymore when we were content to just bitch about the Fed and excessive quantitive easing. These days I have to compete with daily Trump bashings, terrorist attacks, social media scandals, and whoever’s turn it is today to be labeled a gay-commie-nazi-bigot-racist-marxist-global-warming-denier. Did I leave anything out?

Anyway, my bold claims aren’t much of a stretch as almost all of my open campaigns continued to print money during my time off. Which greatly helped ease the daily horror of watching the EUR/USD climb higher relentlessly without an apparent end in sight. Aren’t there laws against that for crying out loud? 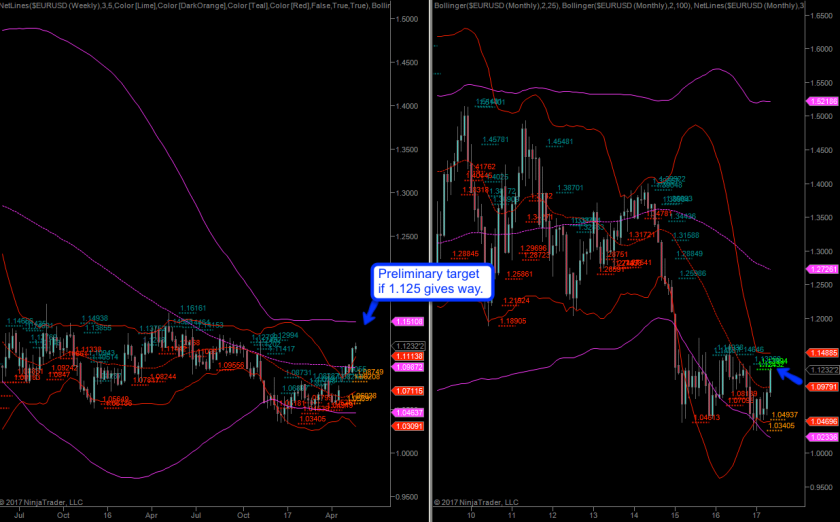 Oh well, if you recall I pretty much expected this much and had hedged myself accordingly. Shown above are the weekly and monthly panels which suggest that there’s probably more upside in the making. First up the weekly Bollinger is squeezed to the max, secondly it’s trading above the 100-week SMA the first time since – what – years? Third there’s a breach of several monthly NLBLs in the making and if 1.125 gives then I’ll see you at 1.15. In other words I may just double all subscriptions so you may want to lock in a good rate right now

What, you thought the Mole softened up a little after a few days of vacation? You would have been right on Friday morning but then I made the mistake of pointing my car South straight into Italy in order to meet up with Scott. Big mistake. In the interest of being politically incorrect let me just say this: Do not ever drive a car in Italy. Go by bus or by train and make sure you’re wearing a helmet. I’ll just leave it at that.

Now if you don’t drive in Italy then it’s a lovely country full of amazing food, beautiful stylish people, and I would love to say gorgeous landscapes but coming from Austria my perspective may have been skewed. Sorry Italy – in my not so humble opinion Austria wins this one, but you definitely smash the Alpine yodels in the gorgeous women department and that counts for something. And I have never ever seen better dressed men with better haircuts, so you ladies are in for a treat. Compared with those guys Scott and I looked like homeless people. 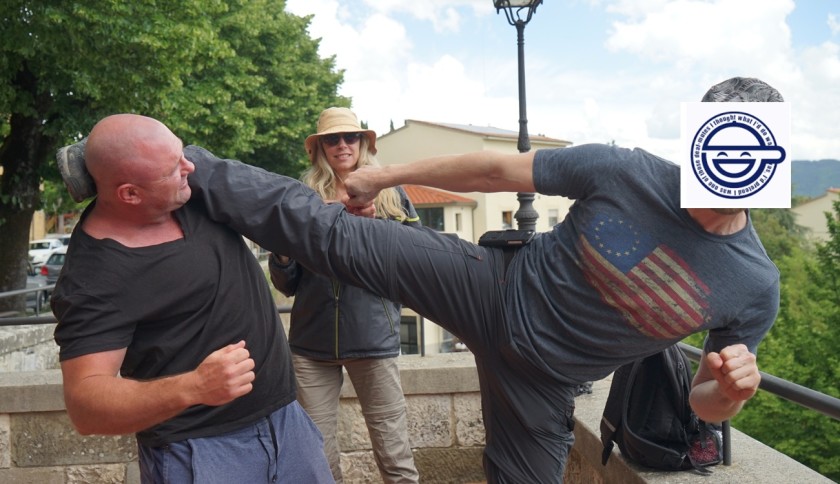 Anyway we both had an awesome time getting fat in Tuscany and for dessert Scott even let me kick him in the head a little. Suffice to say he didn’t feel a thing as he’s built like Drax The Destroyer. I’m not kidding. 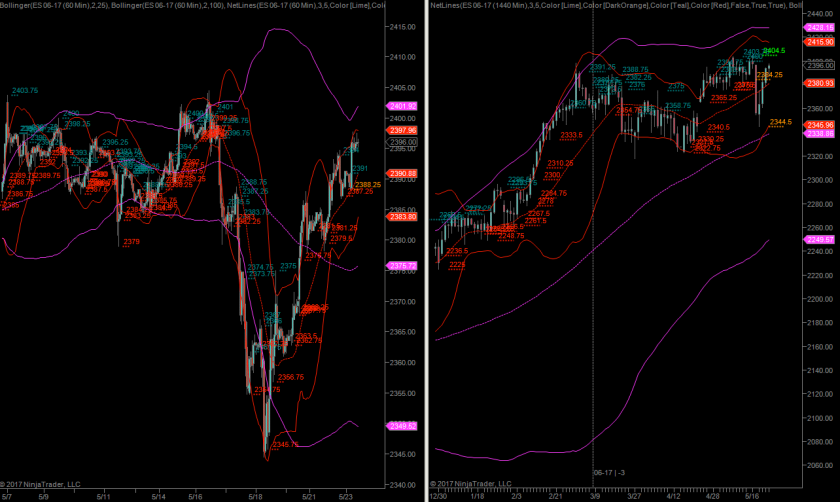 As you can imagine I’m just coming up to speed on the trading end. Looking at the E-mini I couldn’t help but chuckle as the post-Mole-vacation snap-back is almost a perfect mirror of the preceding sell off. Some of you guys were choking about short positions as I was boarding my plane last Monday. Well, I hope you cashed in those chips as we’re almost back to where I left things a week ago. That was a massive shake out and everyone got some.

From here it seems like a small correction would be in order followed by a final run toward new all time highs. I don’t feel compelled to get involved here right now but will keep a close eye on this. Remember it doesn’t matter where it comes from – all that matters is where it’s heading. 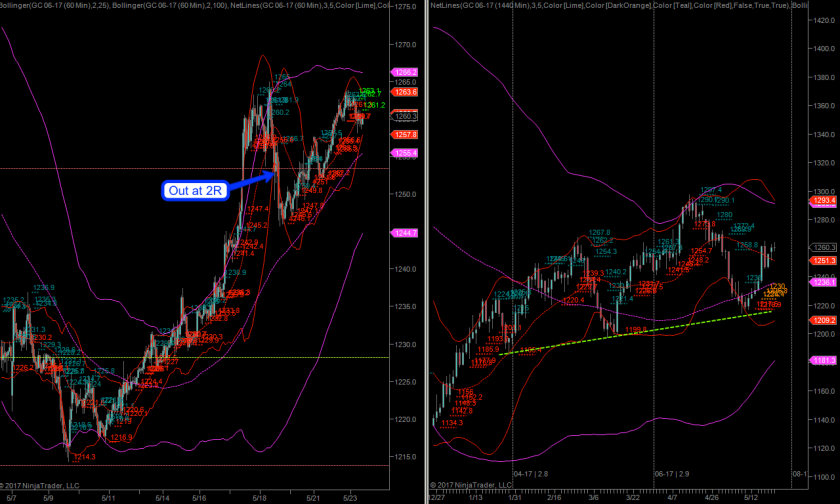 Gold netted me 2R as I advanced my trailing stop to a major spike low below 1253 late last week. I actually think we may be able to double dip here once gold is done shaking off weak hands. Stay tuned! 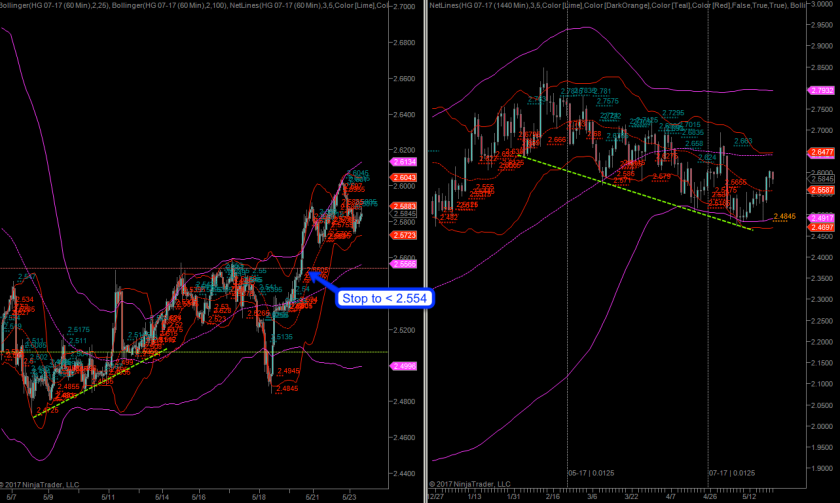 Copper continues to take its merry time but patience has finally paid off. I’m advancing my trailing stop to below 2.554. By the way if you glance at the daily panel – I think this one is good until 2.65 where the 100-day SMA looms. I’ll definitely start narrowing my trail there. But if it breaks higher then we may actually got a runner at our hands. Again I will keep you guys posted here as this is one interesting daily chart with long term potential. 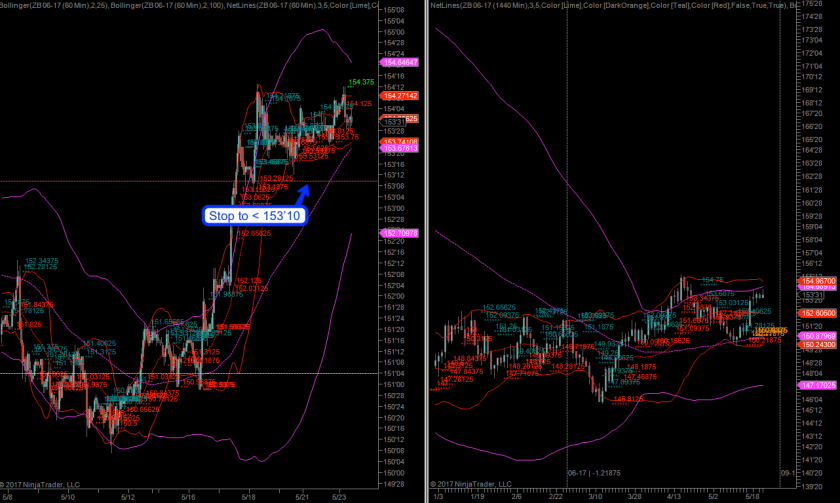 Bonds – kaah-chiiiinggg!! Moving my stop now to below 153.10. Did any of you guys follow me into this one? By the way once again look at the daily chart. What do you see there? Squeezed Bollinger and a retest of the 100-day SMA. Could get juicy here! 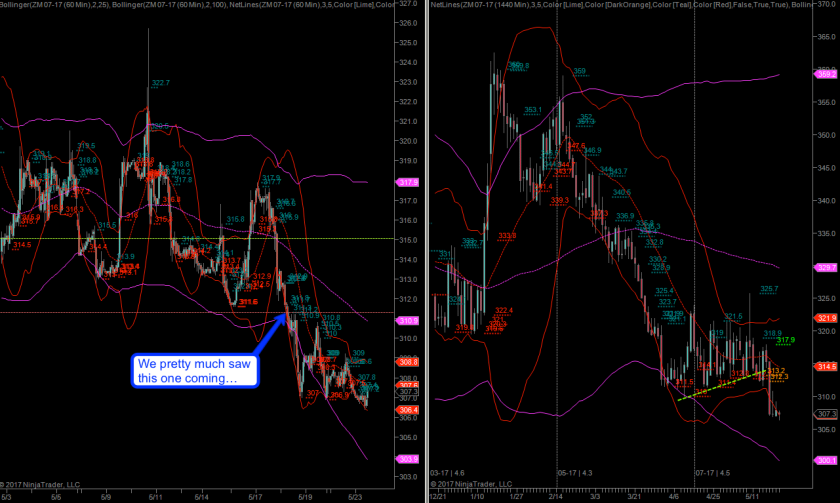 Alright – let’s wrap it up with the one dud. Soybean Meal crashed and burned ignominiously and you may recall that I saw it coming as there simply wasn’t any mojo. However lacking any pertinent exit rule I had to keep it running. And if you look at copper then you know WHY I don’t have such a rule: because there appears to be no edge in timing a campaign, at least on the hourly and daily panels. Feel free to run the numbers and prove me wrong of course 😉

Good to be back!