How To Trade Vega At Market Bottoms

As I was perusing the comment thread this morning I saw a few musings on how to best get positioned near a potential market bottom. The option strategies that were suggested are definitely reasonable (i.e. regular credit spreads) but IMNSHO non-optimal during times of rapid volatility spikes. 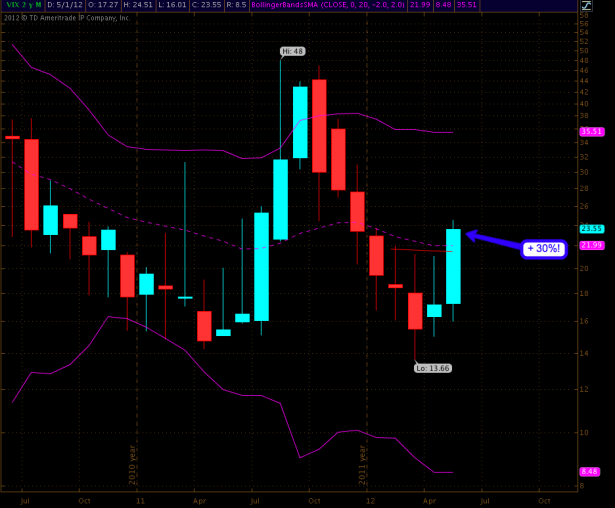 In order to set the stage observe that IV as expressed by the VIX has jumped by 30% in the past month. Thus I decided to put a together a quick and dirty write up on an exotic beast called a ‘reverse calendar spread’ – a.k.a. ‘reverse diagonal spread’.

Let me however precede the following with a caveat – I am not suggesting that a market bottom is already in the works but I’m pretty comfortable in proposing that we will see one in the next five sessions.

We all know that high volatility associated rapid sell offs offers tremendous profit potential – in theory. The truth of the matter is that even seasoned traders are often only familiar with the most basic option strategies, which unfortunately do not apply well in an environment of high volatility. Obviously the most straight forward approach here would be to simply sell vega via shorting puts but unless you have suicidal tendencies I would not recommend that as an actual option (pun intended).

Bull and bear debit spreads are generally poorly priced when there is high implied volatility (IV). When a bottom is finally achieved, the ensuing collapse in premium due to volatility crush often strips away much of your profit potential. Many a traders have been punished this way and often they are not even aware of what happened and that vega is to blame. So even if you get the timing right and are able to get positioned you may easily see yourself being stripped of most of your ill gotten gains during a snapback move following a capitulation sell-off.

This is why I propose at a simple strategy that actually profits from imploding volatility irrespective of market direction (theoretically – more on that below) and requires little up-front capital if used with options on futures or ETFs. Even better, as long as IV drops or remains stable (e.g. after a big push outside the 2.0 BB) it has little or no downside risk, thus reducing the bottom-picking dilemma. The strategy also offers some very juicy upside profit potential if things start accelerating to the upside and vega is being crushed, thus causing an increase in pain that is often referred to as a short squeeze. The basic idea of this strategy is the inherent opportunity offered by a sharp drop in IV. By neutralizing delta and gamma and getting short volatility, or short vega, the strategy is a great tool in our arsenal for banking coin near market bottoms.

As most of you rats already know a high VIX means that options have become extremely expensive because of a surge in volatility, which massively affects option premiums – calls and puts alike. This presents a conundrum for option buyers – whether of puts or calls – because it leaves you long vega just when you should be short vega.

Thus the most straight forward solution is to sell options which leaves you short vega and thus able to profit from a volatility crush. However, especially during times of a potential medium to long term trend change (i.e. bull market rolling into a bear market) it is of course very much possible for IV to push even higher. And if you are being caught short vega under these condition then it can very quickly lead to significant losses.

Traditionally calendar spreads are considered neutral strategies, involving selling a near-term option and buying a longer-term option, usually at the same strike price.  The idea is to have the market stay confined to a range so that the near-term option, which has a higher theta (the rate of time-value decay), will lose value more quickly than the long-term option.

Back To The Real World – SPY Example:

All the above may be confusing to you so I put together an example with regular SPY options on the trusty TOS option simulator – a fun diversion for lonely weekends, for example if the local nudie bar is closed for renovations. Heck, it beats reruns of Friends – at minimum it’ll teach you a lot about option greeks. 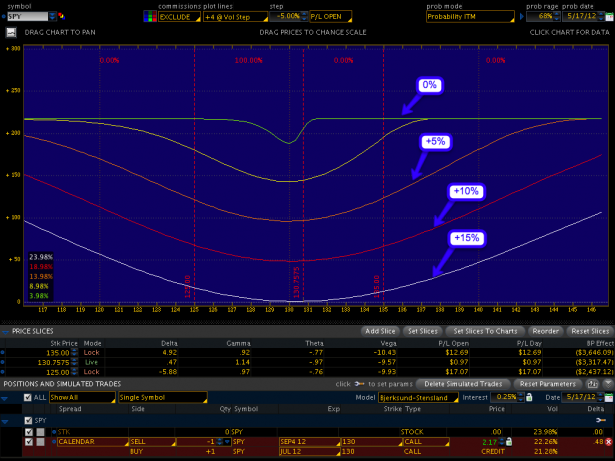 As we are optimists I’m showing you the winning side first. The ThinkOrSwim simulator does a great job of showing you that you are effectively neutral delta and gamma. We have SPY trading near 130 and are currently counting 63 days to the expiration of the July 130 call. The trade is constructed using simple SPY call options. I think initial margin requirement for the spread shown above is around $200.

So assuming SPY trading near 130 and expecting a bottom in place soon (which again may not be the case – this is just an example) we buy one July 130 call and simultaneously sell one September 130 call, which leaves a net credit of ~$217 before any commission or fees. This should best be done by an experienced broker who can place a limit order using a limit price on the spread or you can use the TOS platform which allows you to automate the process and ensures that you are not being partially filled. It is very important to understand that the goal for this spread is to close the position at maximum 30 days ahead of expiration of the near-term option (Oct expiry), a bit sooner is better.

As you can see in the above chart – as long as vega drops from here you really don’t care where prices are going as you should be able to bank some mighty coin. If you expect only a short term spike then you may have to play this one with weekly options with the sell side being three or four weeks away but that is really outside the scope of this little example. 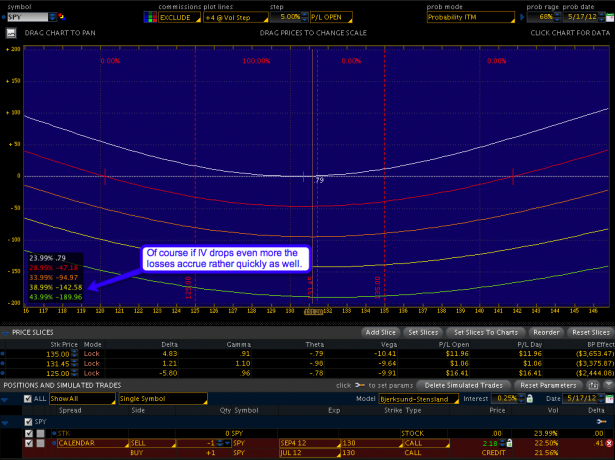 But of course we all know that vega would explode even higher should prices continue to drop lower – in particular if we breach the proposed support clusters I have pointed out in the past few days. Which really renders your profit potential during a drop associated with dropping IV nothing but academic. In essence on the very first chart you can ignore the simulated profit curve below the 130 price point. Why? Because it is unreasonable to assume that vega will drop if we continue much lower from here – most likely it’ll jump higher. On the inverse anything above 130 on the loss simulation above can be ignored as well as we most likely won’t see IV run higher if prices are starting to snap back.

Obviously I have skipped much of the meat on how to calculate and structure each side of an reverse calendar spread. But that really wasn’t my focus and there are plenty of great tutorials out there if you want to get into the nitty gritty. What’s important to understand is that a RCS can effectively be used during supposed market bottoms and may be preferable to other credit spreads. 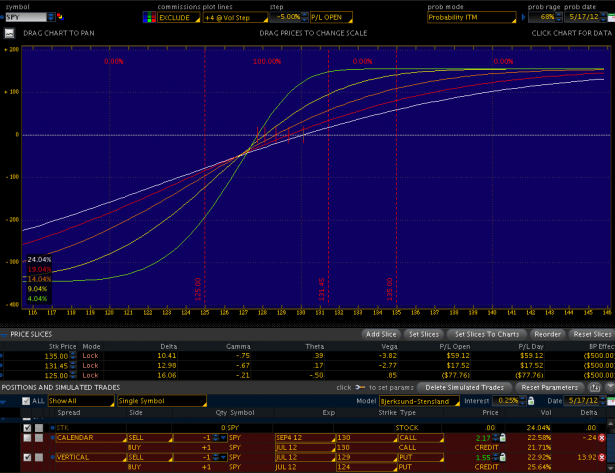 Here’s an example of a regular vertical credit spread and with volatility falling in 5% increments. As you can see those profit curves flatten out rather quickly.

Getting the timing right of course is an art in itself but I thought that a 30 day window may be a good compromise. If you want to put together something more short term then you may look into playing the weeklies. But that’s a completely different story as they move a bit more like futures and react differently to theta burn.