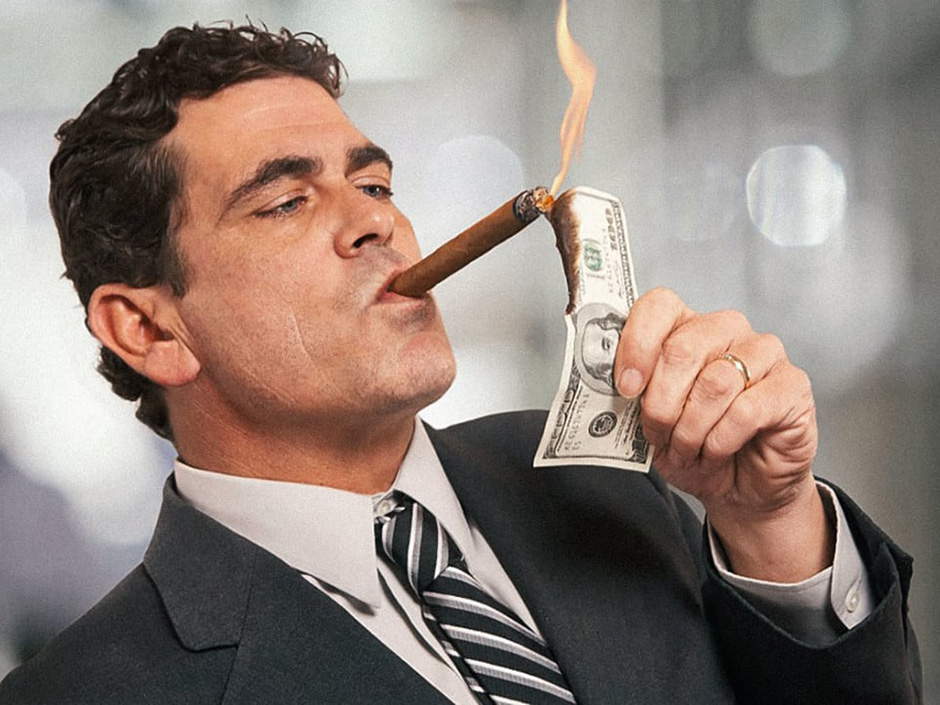 I actually wasn’t planning on posting today but the current move in NG serves as a glaring reminder of why it (literally) pays to fade the daily onslaught of MSM or social media noise and to instead focus on meticulously following what we teach here. And to that effect to pay close attention when we lead by example. Unlike by the way the vast majority of top name ‘market analysts’ you’ll be coming across during your career as a trader. Others talk – we do.

Our ongoing natgas campaign is just one in a long and growing list of posts here that demonstrate how successful trading can be accomplished on a daily basis by almost anyone willing to play by the rules. No matter where you live, how you look like, how young/old you are, or where you come from.

I posted this one to my intrepid subs last week and it took a few days to get out of the gate. However true to form it finally blasted off and thus far has produced over 3R in ill-gotten gain. MFE was 4R and I just raised my trail to 3R to claim what’s rightfully mine, plus I’m holding an option on prima nocta with the fiancee of the poor shmuck holding the other side of this trade.

So what voodoo magic did I use to make this call?

WRONG QUESTION! We don’t make calls here at Evil Speculator, we don’t count waves, and we don’t read tealeaves either. What we DO here on a daily basis is to simply trade the tape in front of us based on time tested technical analysis that actually has a proven statistical edge, unlike magic turn dates or doomsday predictions dished out daily by the MSM. 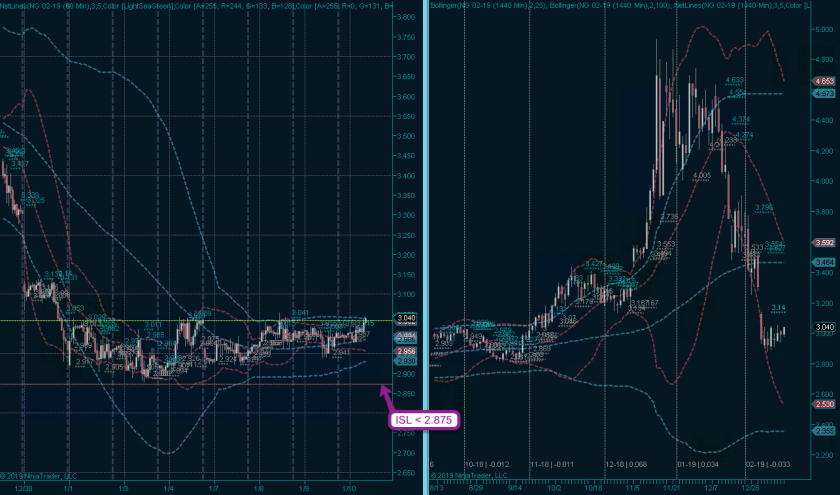 Let’s travel back in time to the 10th when I suggested this as an entry to my subs. What are we looking at? The short term panel is pinched as hell, which for any symbol would suggest RV expansion. But wait – we are talking  nuttygas here, the fabled widow maker.

So we already know from years of experience that natgas has a tendency to run like a hare and loves to make tight turns. So this looks pretty interesting but the daily doesn’t, so do we skip? Maybe but let’s look at the LT panel: 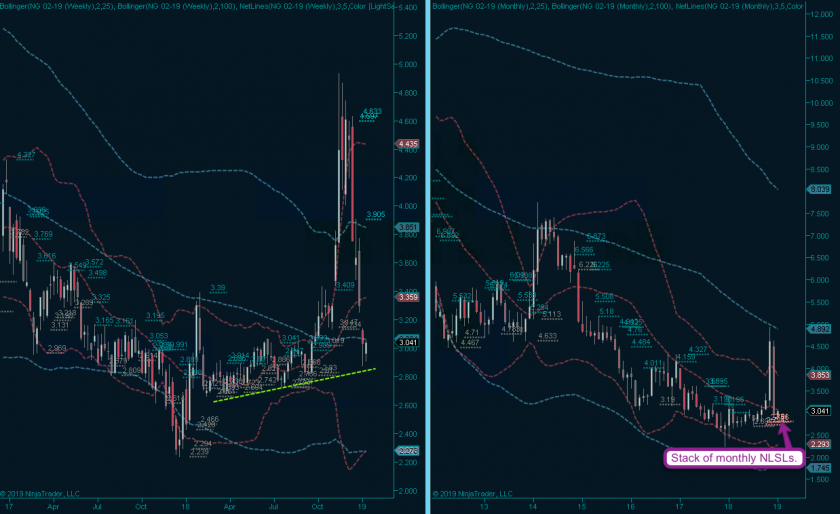 Now here’s some technical context I can sink my teeth into. The support line on the weekly isn’t perfect but it’s acceptable plus there’s a stack of monthly Net-Line Sell Levels right below us. Both of which tells us that if it falls it’ll fall hard, but if it bounces it’ll probably go gangbusters.

This is what I said at the time:

Natgas has been pinched as tight as it gets on the hourly panel and I expect a sudden release in the near term future. Which has propelled me to grab a long position with an ISL < 2.875. If that one gets breached I would not want to be a NG producer as I can’t imagine how pumping it at those prices can be profitable.

Now for the record: this is not why I’m taking this entry, I’m going purely by my charts here. Clearly ‘impossible’ price drops happen all the time, just think of crude and how it has gone from threatening to touch the $100 mark in October of 2018 to touching 43 by Christmas.

No hyperbole here, no predictions. We call it as we see it without resorting to spurious predictions. In case you wonder – yes we cover all of our losers here as well, without fail. Keepin’ it real since August 2008 😉

And that, my dear ladies and leeches, is how it’s done.

Give me your tired, your poor, your huddled masses
yearning to become stone cold professional traders.
Your huddled masses yearning to live (debt) free,
The wretched refuse of your HR departments.
Send these, the intrepid, the truth-seeking to me,
And the scales of loss and despair shall fall from their eyes.”

This right there needs to be chiseled above the entrance to the evil lair.

The future is now – so don’t bring a butterknife to a raygun fight. If you are interested in becoming a full subscriber then don’t waste time and sign up here. FYI – a Zero subscription comes with full access to all Gold posts, so you actually get double the bang for your buck.