How To Trade Realized Volatility 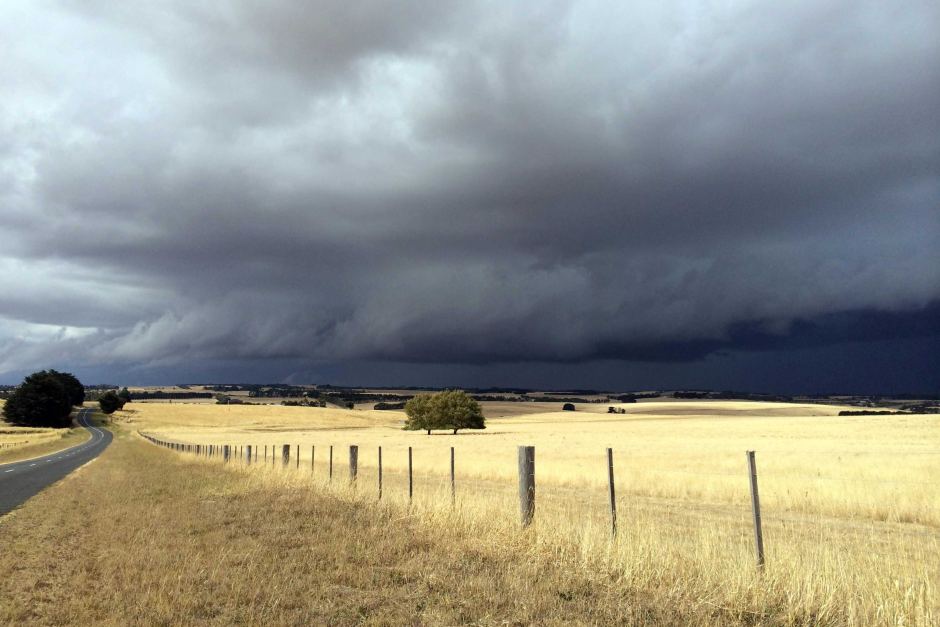 I wonder what thoughts were triggered in your head when you saw the featured image above. The notion of a brewing storm is rather ominous and usually is associated with inconvenience, discomfort, and sometimes outright destruction of property. But I chose it very carefully to make a point which I’ll try to convey below. Let’s look at some charts: 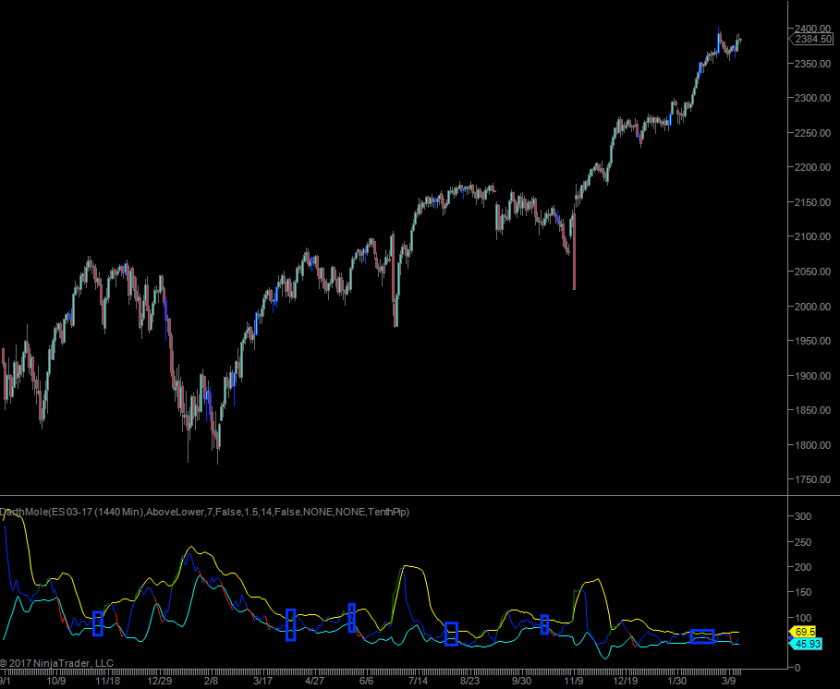 In case you are new here, the indicator on the bottom of this chart is a slightly altered version of the ATR with a simple Bollinger slapped on top of it. When creating it the intent was to visualize discrete cycles of realized volatility (RV), which I subjectively believe it does fairly well. If nothing else it does show us the wide range that RV can take and how it affects price movements.

The little boxes I drew on the chart highlight periods in which volatility had slowed down considerably, thus producing a very narrow Bollinger bubble. Chartists often refer to this as a ‘pinched Bollinger’ and the associated rule is that an expansion of the underlying is at hand. Since we are measuring realized volatility we are thus looking at moments in time that depict abnormally high contraction of RV (i.e. the ‘pinch’), which in many (but not all) cases results in an expansionary cycle. So far so clear.

What often is forgotten however is that realized volatility (RV), unlike implied volatility (IV), is agnostic to direction, it only cares about velocity (remember: average true range). While IV represents the expectation of future volatility RV shows us the volatility that already has happened in the past. And since the vast majority of traders or investors view rising prices as a positive and falling prices as a negative rising IV is associated with the anticipation of falling prices. Meanwhile RV is a direct derivative of price and as such happily swings in both directions. Which means a drop in price will have (almost) the same impact on RV than falling prices. I said almost because in order to make it the same you would have to normalize the price series but that’s a topic for another day

When a storm arrives we are often inconvenienced as for example driving in ‘bad weather’ makes things more dangerous for us. But let’s not forget that there’s nothing inherently ‘bad’ about rain and wind in, in particular if it presents itself in relative moderation. Flowers and plants for example wouldn’t pollinate and grow for one and without rain we would be forced to drink saltwater and that’s no fun.

Now there is a reason for my lengthy treatise on volatility and its analogy to weather. Because when I suggest that a storm may be brewing then my inference is not that prices may necessarily fall. It’s easily possible that we are going to see a resolution to the upside, of course most likely not without luring a few bears into placing bets to sweeten the pot a little. Noblesse oblige.

If you take another look at the chart above you will see that the very last box I drew on the very right is also the most rectangular. What does that mean? It means that RV contracted on the E-Mini to a historically low level and remained in that range for an extended amount of time. Not surprisingly that contraction accompanies the juicy rally we enjoyed all the way until my leave to Tenerife. Once again sorry for having spoiled the party.

Expansion, which is what we already have been perceiving over the past month. You may also have noticed that the current Bollinger bubble, although being in the process of expanding, continues to be positioned relatively low in comparison with at least the past year of pricing action. Which bodes the question: do the odds support a rise or a further drop and thus a renewed contraction? Just like you I don’t have a crystal ball but at least the limited sample size shown on the chart points toward expansion. And that expansion may actually come in the form of a spike higher followed by a fast drop lower, or the inverse. We. Just. Don’t. Know. But what we do know are our trading and system rules and they should tell us that realized volatility demands a adjustment in stop and campaign management. For me personally that means WIDER stops and SMALLER position size, which incidentally are mutually dependent – see for yourself.

But there is more and we’ve only touched the surface…

Properly interpreting realized volatility can lead you to placing better discretionary trades and/or develop more effective systems tailored to exploit specific price behavior. What should have become clear now is that the underlying characteristics of various price series can differ substantially. Nevertheless it is rare to find discussions on this most basic attribute of price propagation in popular trading books or tutorials, the one big exception being the quant sector (for obvious reasons). Short of spending the next 15 years studying to become a quant trader I hope that this post will help you read your charts more effectively going forward.