I’m glad that I decided to hold a few lottery tickets into Friday as things are beginning to look interesting. At least as of this writing the bids remain far and few in between and after an ignominious attempt to paint a floor equities have been dropping lower. I’m going to make this extremely easy for you guys, so pay attention: 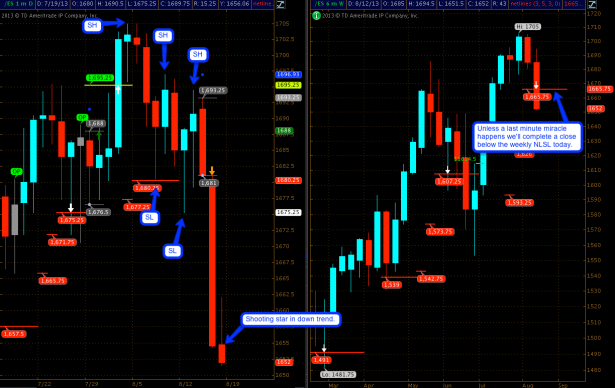 Forget all them fancy indicators – if you are sitting short right now then this is the one chart you care about. Pure price patterns – the Mole serves it up old school, that’s right. On the left panel we’ve got the daily and I have taken the liberty to highlight all spike highs and spike lows since the very top. A spike high is nothing but a candle with a lower high to its right and a lower high to its left. And a spike low – well, you guessed it – a higher low to its right and a higher low to its left.

So why do we care? Because a series of lower spike highs and spike lows (SH-SL-SH etc.) establishes a technical downtrend and that has implications on the types of entries we take. For instance in a downtrend the low of a shooting star (as we are painting today most likely) is a sell entry with good odds. FWIW – a failed shooting star is always a good entry (trending or not) and we would go long on a breach of the high). So that little panel shows us a lot of context and it’s pretty bearish I’d say!

But not as bearish as the weekly Net-Line Sell Level which we breached yesterday and – assuming any last minute surprise tonight – we will be closing the week below it. And that my dear ladies and leeches is a bonafide weekly sell signal. Bears rejoice!!

Well, as I said yesterday – it’s but one penny in the bearish jar – it doesn’t erase all the bullish tape that preceded it. But heck – it’s a start and we are well positioned and that’s the best we can ask for, right? 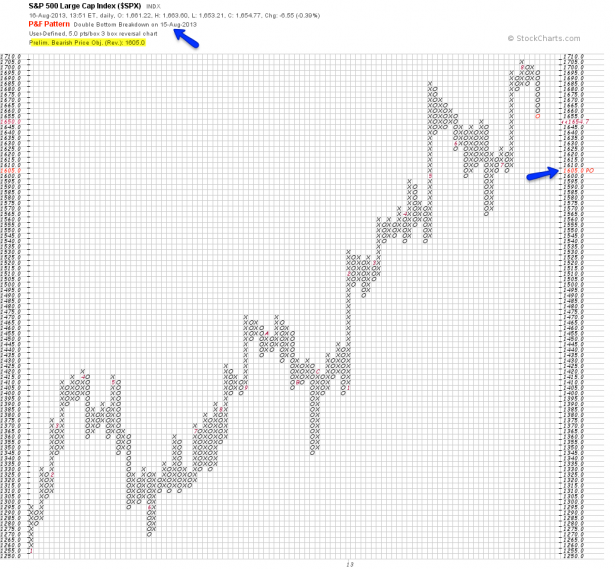 Here’s my P&F chart (SPX) which shows us a bearish price objective of 1605 after triggering a double bottom break down yesterday. It would take a pull back to 1675 for this chart to issue a low pole reversal warning – until that happens the bulls are officially in a world of hurt. 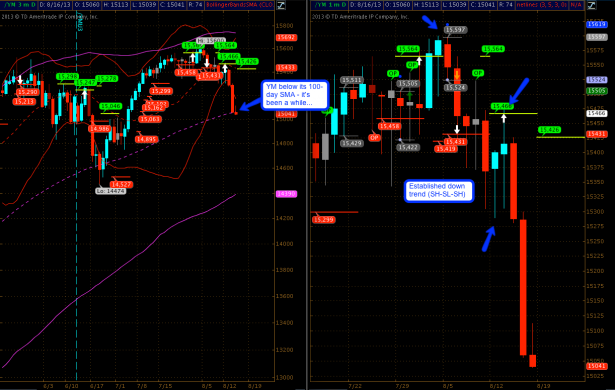 Here’s the YM – here we’ve got the daily on both panels – my momo chart is on the left and the pure price patterns on the right. Two things stand out here – on the momo we are actually trading below the 100-day SMA and a close below would be bearish in my book. Not a solid sell signal but the onus now is on the bulls to pull this cart out of the mud post haste. The more time we spend below the SMA the more supporting it is for the current downward correction.

On the left panel I have once again pointed out a series of SHs and SLs – only three but we are in a technical downtrend since we dropped through the Monday low. 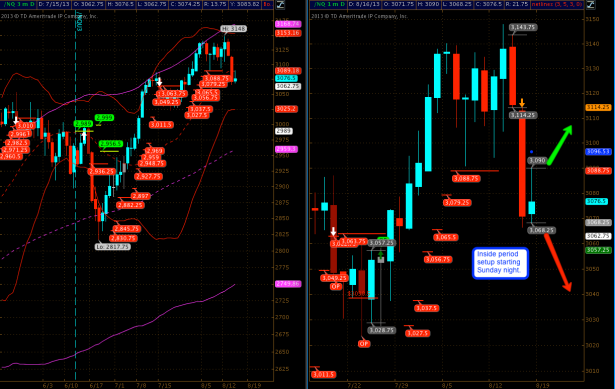 The NQ has been the most steadfast of the equities trifecta – it is now sporting a juicy inside period – again explained on my cheat sheet. The entry will be valid starting Sunday night. 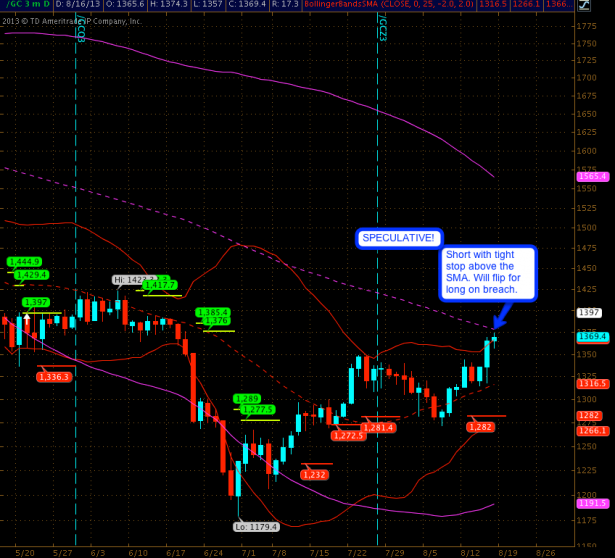 On gold we’re looking at a speculative short entry near the 100-day SMA which is now right above us. I usually prefer a bit more context (e.g. a Net-Line, candle pattern, etc.) but I’m willing to throw a small position at this with a stop above the SMA. 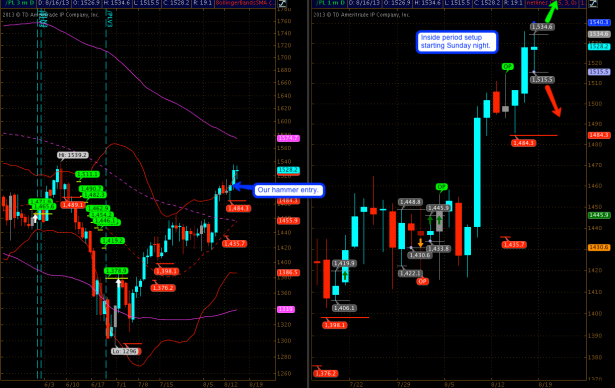 And while we’re talking precious metals – here’s platinum with a very nice inside day as well. You may recall our hammer long and if you’re still holding your positions then you can move your stop up to the low of today’s inside period. A drop below the 1,515.5 short trigger would obviously put us in a short position. If you want you can add long positions on a breach of the 1,534.6 long trigger. A bit of pyramiding is permitted after earning 1R after all.